How to Make Homemade Marshmallow Peeps

The world wants us to make Peeps.

I discovered this last year on a day that began with reading an article in the local paper in which Marilyn Hagerty called a Ruby Tuesday “one of the stars in the restaurant scene” of my new town. It was a day I almost gave up on food.

On top of all of that, I had an all-around bad feeling about finding appropriate Peep-making tools following a string of failed attempts to locate recipe supplies in North Dakota. Brisket was only available frozen, daikon was nearly nonexistent, tapioca balls cost a fortune. It’s a tough life sometimes, the small town one.

But then, I found myself in an actual DIY Peeps section in my two local stores. As I stood there going back and forth between the metal mold and the two (two!) silicone varieties, I thought I might be dreaming. 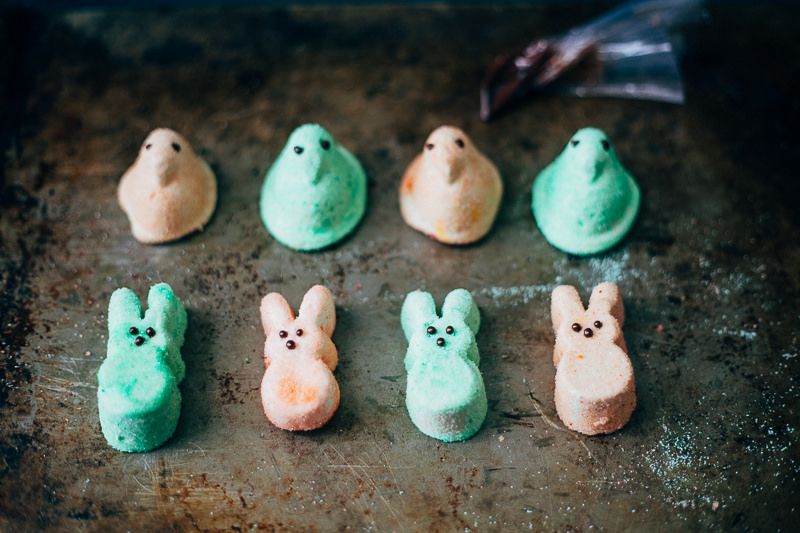 I debated whether it would be a cop-out to spend money on a mold rather than trying to perfect my piping skills. But then I remembered why I hadn’t tried making Peeps before: I never wanted to ruin a batch of marshmallow batter by failing to pipe perfect Peeps. I cringed at the thought of going through the mess of homemade marshmallows only to come out with ugly blobs.

I wanted a surefire way to make perfect Peeps on the first try. I wanted that mold. I needed that mold. Is this what good marketing is?

So I took home the silicone bunny-and-chick mold and tested all of the possible ways I could imagine myself making Peeps: with the mold, a cookie cutter, or freehand piping. The mold proved the most consistent way every time, but if you can't find one—or you're up for the challenge of hand-piping your peeps—there are plenty of tutorials online.

Because I took the easy route and used a mold, I was left with plenty of brainpower to think up odd flavors: Matcha worked, Sriracha didn’t. I even used Campari, which proved to be a boozy success. 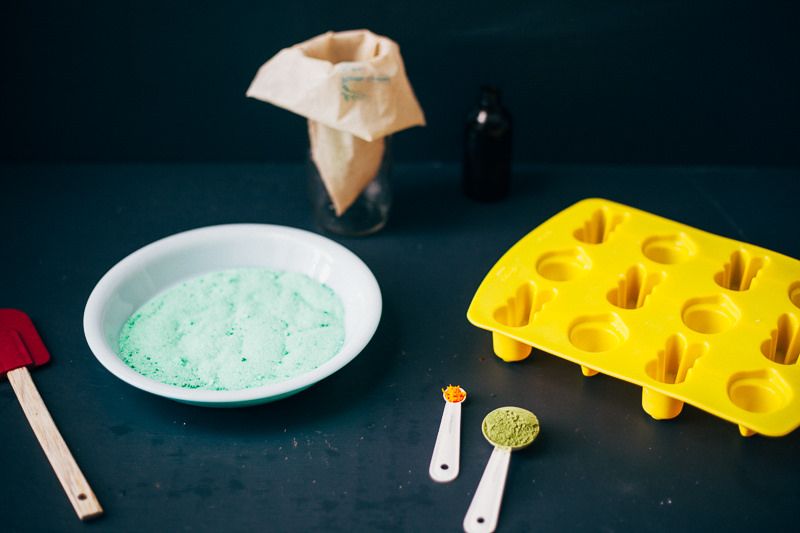 Lightly spray your Peep mold with cooking spray and set it aside. Have a piping bag, rubber spatula, and any additional flavorings like extracts, zest, or powders standing by. Also, place the sanding sugar on a plate and set it aside. 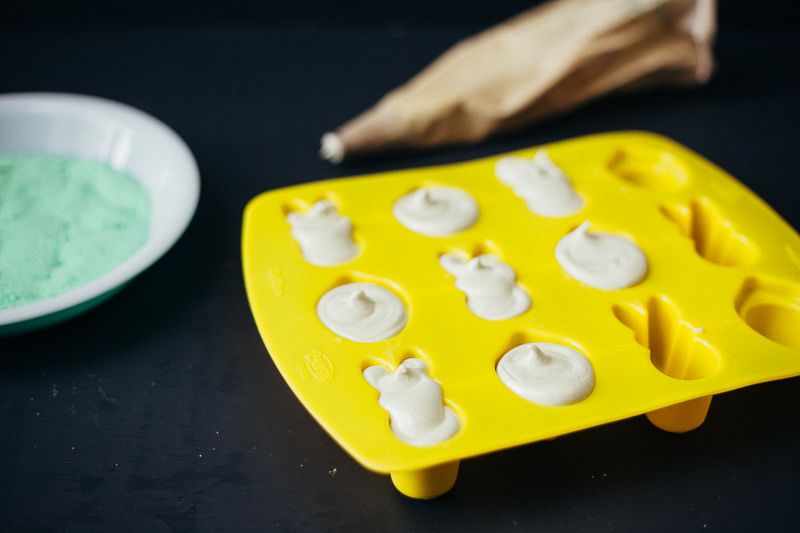 In a medium pot, stir together the remaining 1/4 cup of water, the white sugar, the corn syrup, and the salt. If you'd like to infuse your Peeps with herbs, place a sprig in the mixture but don't break it up at all because it will be difficult to remove.

Heat the mixture over medium heat until it reaches 240° F. Remove it from the heat, and if you're using herbs, remove the sprigs with tongs. 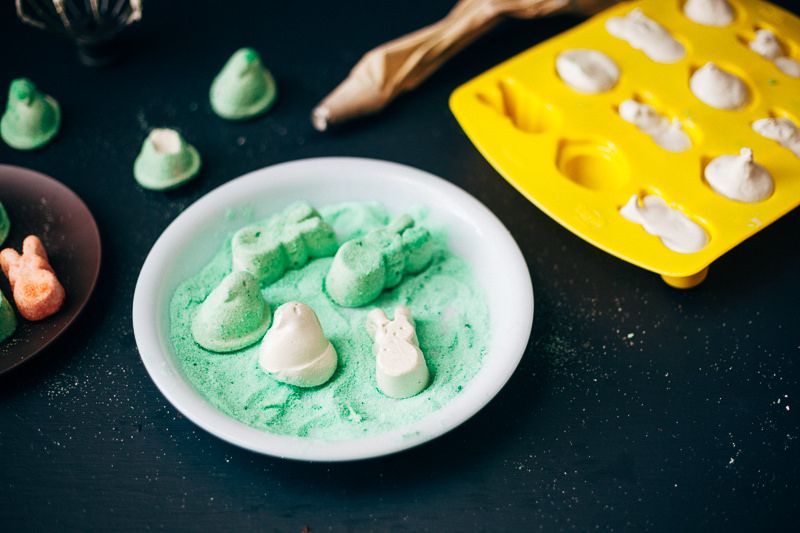 Return to your stand mixer, where the gelatin mixture is sitting, and turn it on low. Drizzle the hot sugar mixture in a slow and steady stream down the side of the bowl. Once the entire mixture is in, increase the speed to high and let it mix for 10 to 12 minutes, until lukewarm and fluffy. Add any additional flavorings—1/4 teaspoon citrus zest, 1 tablespoon matcha green tea powder, or 2 teaspoons vanilla extract—in the last minute of mixing. 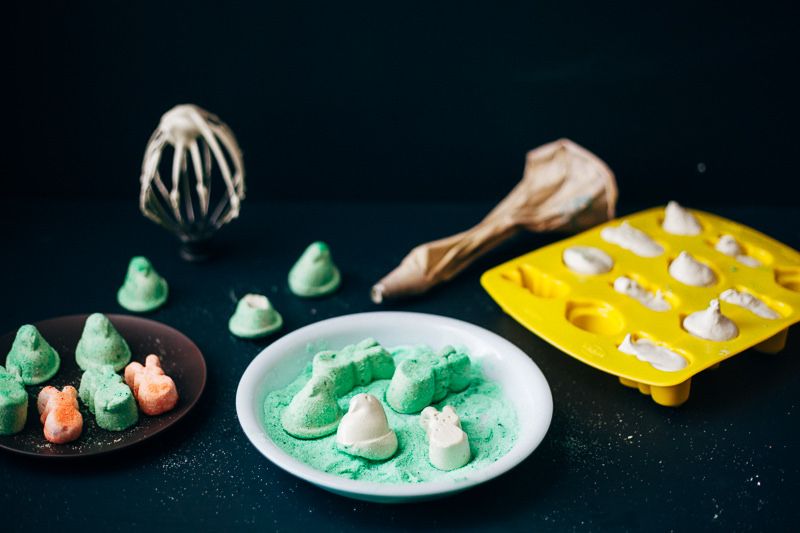 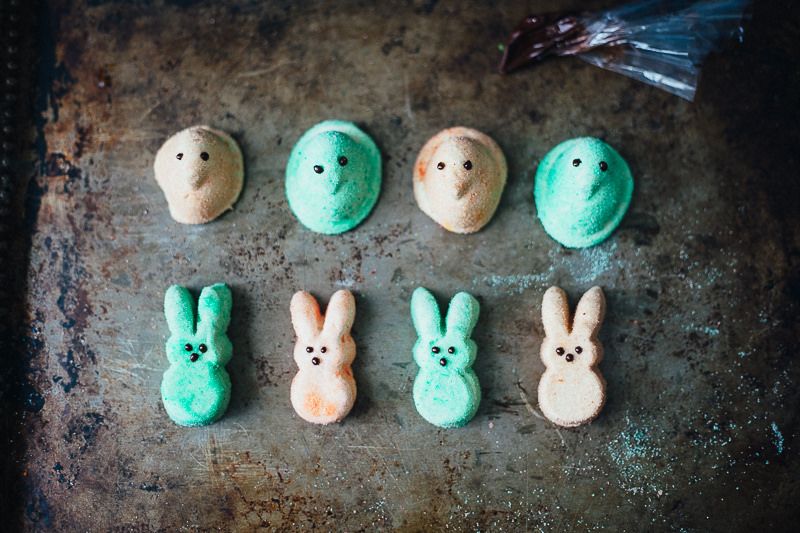 To give the Peeps faces, melt the chocolate chips and spoon the melted chocolate into a small piping bag or into the corner of a sandwich bag. Snip a tiny bit off the end and pipe on their faces.

Let the Peeps dry and then store them in an airtight container. Enjoy the peeps within a few weeks (or before the bunnies hop away). 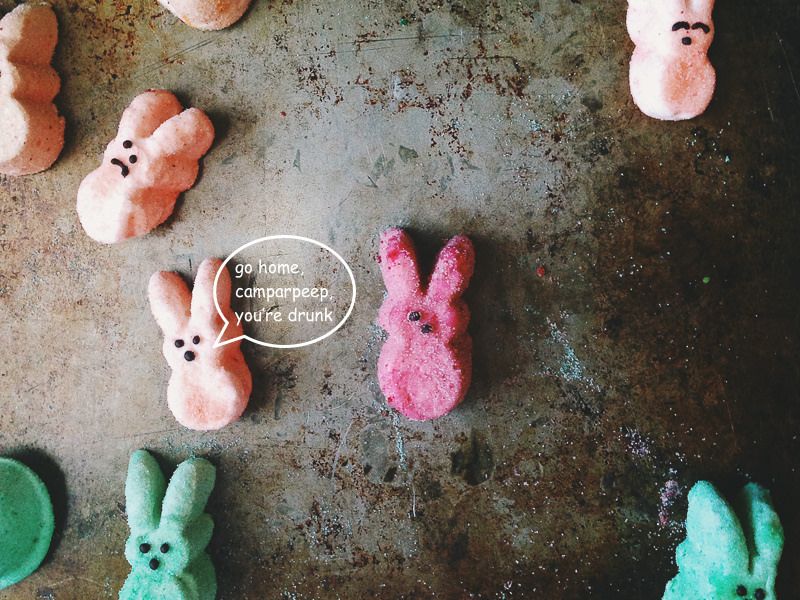 This post originally ran in 2015, we're sharing it again today in time for Easter.

Lori W. April 15, 2017
Ok, just made these delightful little peeps. Not as easy as it looks so here's what I learned. Making the marshmallow was the easy part. I had a hard time getting the sanding sugar to adhere. I THINK because I may have used too much spray [Trader Joe's canola spray]. After 10 minutes, you can see the peeps expand and they easily came out of molds; however, the bunnies were WAY too large, that's how much they expanded. The chickies, however, are perfect. So, what I learned, particularly with the bunnies is NOT to fill the cavity to the top. Also, to not use so much spray and perhaps buy brand new sanding sugars. All in all, though, a lovely experience that next year I will do with the grandkids. Thanks for the recipe!

adelelily April 5, 2015
Is there a substitute for corn syrup Please as I'm allergic?

molly Y. April 11, 2014
Hi Calinda! I found mine at Michael's and I saw similar ones at Target. Here you go: http://www.michaels.com/Peeps-Silicone-Mold/bk1536,default,pd.html?cgid=products-bakeware-peeps

Calinda G. April 11, 2014
Thanks Molly! Haha! I'm in Hawaii...worse than any wilderness in North Dakota. No Michael's or Jo-Ann's here. We do have a Target though! I'll give it a shot...but they're probably all out after seeing your post! :)

londonbakes April 11, 2014
You are too, too clever. These are pretty much the most adorable thing I've ever seen. And boozy peeps? I'm so in.