16 Stellar Ways to Use Radicchio

Plus, everything you ever wanted to know about this bitter vegetable—from when to buy it to how to store it.

How often have you been at the farmers market and, unsure of what exactly that beautiful vegetable you're looking at is called, mumbled "I'll have one of those" under your breath while pointing at the object of your desire? Let's agree to stop doing that. Head out to the market this weekend and confidently ask for the ruh-DEE-key-oh.

Radicchio is a type of chicory (as is puntarelle) and—along with artichokes, burdock, and Jerusalem artichokes—a member of the sunflower family. Endive, another member of the family, is very closely related to chicories (they’re all in the Cichorium genus), and they can be confusingly named depending on where you live in the world; what we think of as endive is known elsewhere as chicory. 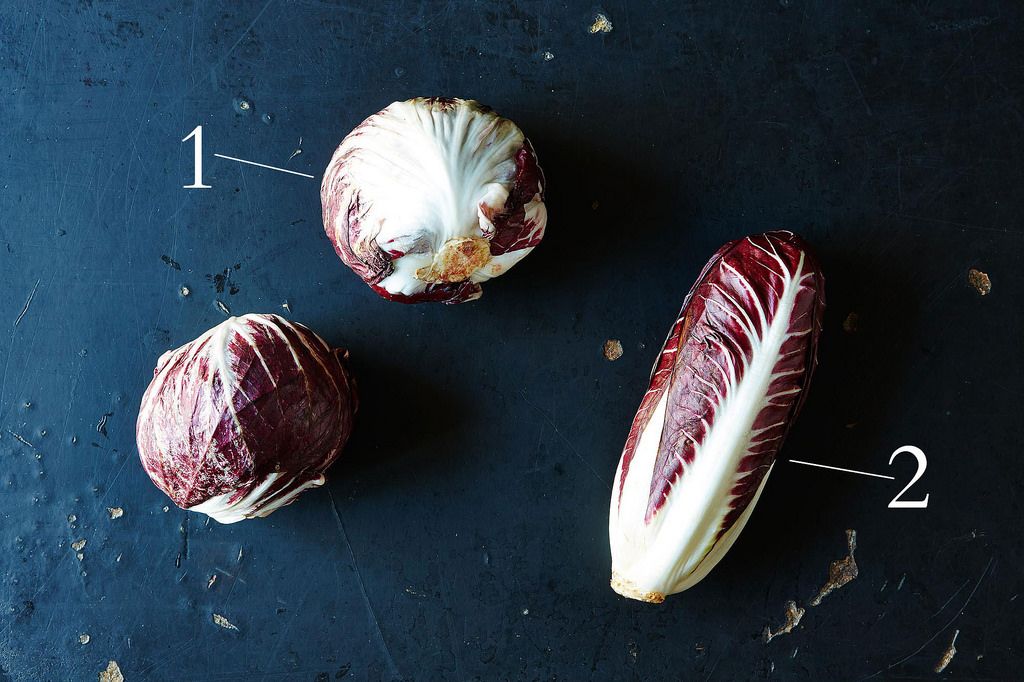 What Types of Radicchio Are There?

There are many different kinds of radicchio: Most are named after the area of Italy where they're grown, and a handful have protected geographic indication (Indicazione Geografica Protetta or IGP). These labels guarantee that the item comes from a specific region, that its quality and characteristics can be traced back to its origin, and that at least one phase of production and/or processing takes place in its designated region.

The most popular type of radicchio in the U.S.—and thus the type you're most likely to get your hands on—is Chioggia (labeled 1 in the image), or more properly: Radicchio Rosso di Chioggia. It's rounded and looks like a small head of cabbage. Once you find it, you'll be able to have it on hand for a while. Deborah Madison says that Chioggia radicchio "keeps well for weeks in the refrigerator, should you need to store it that long, though it’s always better to use things sooner than later.”

You're also likely to be able to find Treviso (Radicchio Rosso di Treviso; labeled 2), which is milder in flavor and more elongated in shape—like a giant version of endive. Tardivo comes from the same Treviso plant, but looks more like a sea creature with curling tentacles. It gets its otherworldly looks from a forced second growth, not unlike endive.

Marcella Hazan, who left us with an abundance of food wisdom, had her own radicchio preferences: “The noblest members of the family—radicchio di Castelfranco, radicchio di Treviso, tardivo di Treviso—make an eagerly awaited entrance around November...The greatest of the three, and, in my opinion, the most magnificent vegetable grown, is Treviso’s dazzling tardivo or late-harvest radicchio.” 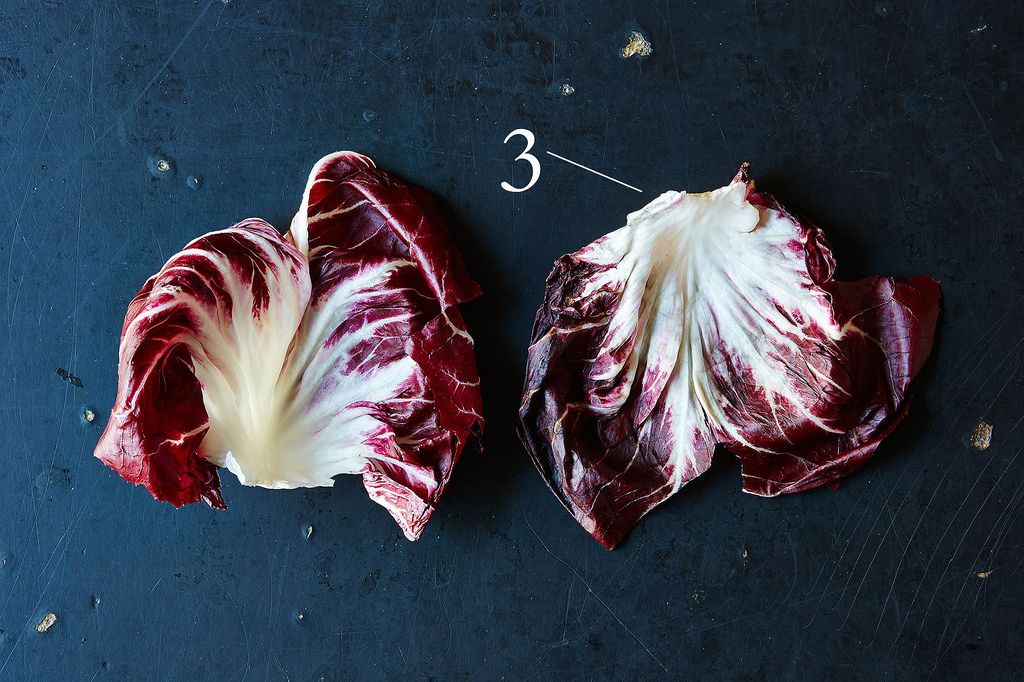 When Is Radicchio in Season?

Although you can find radicchio year-round, it’s at its best in the cooler months; its trademark bitterness is more assertive in warmer months. Select crisp-looking specimens; remove any sad, wilty leaves (3, above) before use; and mentally prepare yourself for any red radicchio to become a less-appealing shade of brown once cooked.

How to Store Radicchio

Radicchio will store best in a cold place (like your refrigerator's vegetable drawer) loosely wrapped in plastic or a perforated bag. It'll last for at least a week (and oftentimes longer) this way.

How to Cook With Radicchio

Marcella Hazan lets us in on a secret tip she learned from the radicchio growers of Chioggia: "Although the whole, bright red leaf looks very attractive in a salad, radicchio can be made to taste sweeter by splitting the head in half, then shredding it fine on the diagonal... Do not discard the tender, upper part of the root just below the base of the leaves, because it is very tasty."

Nancy Harmon Jenkins says: "Here in Italy we usually sliver the radicchio in fine slices and dress it a bit ahead of serving with excellent olive oil and a few drops of good wine vinegar, plus salt, of course. Both techniques—slivering and dressing in advance—help to cut down on bitterness."

Of course, there are countless ways to use radicchio (many of which go beyond salads and side dishes). Once you've got your hands on some, try one of our favorite radicchio recipes below.

A quick kiss on a hot pan brings out radicchio's classically bitter flavor, along with a bit of sweetness, while also adding smoke. All of this works nicely with the salad's creamy buttermilk–crème fraîche dressing, savory pancetta bits, and crisp pear slices.

This contest winner for "Your Best Recipe with Anchovies" nails the balance between the umami-rich anchovies, the bitter radicchio, and the luscious avocado and egg. Basically, it's the perfect midday bite. 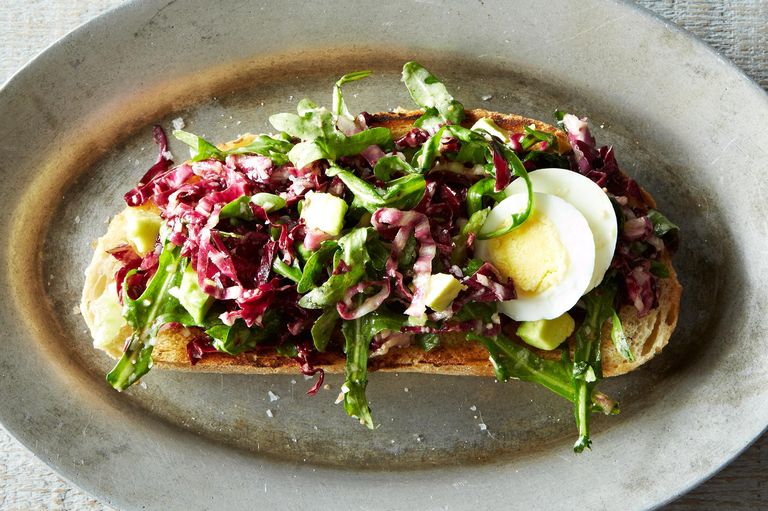 This radicchio- and leek-studded risotto is extra creamy, thanks to the addition of fontina cheese (plus the traditional Parm).

What better way to welcome fall to your dinner table than with this hearty salad starring the season's greatest hits, from radicchio and escarole to fresh apples and pears.

Radicchio and shrimp don't necessarily make the most obvious pairing, but in this dish—inspired by one of Charleston's best restaurants, FIG—they work together like a dream (with a little help from bacon). 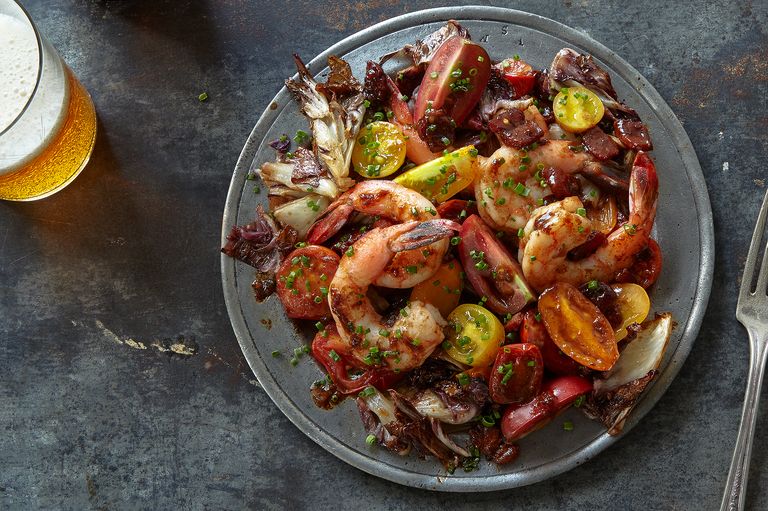 A very satisfying breakfast hash that still feels light and bright (thanks to the zing of harissa and lemon juice).

This two-ingredient sesame chicken is a riff on the popular takeout dish—but the similarities stop there (and end with a vibrant radicchio and orange salad).

A bacon-y side dish (who doesn't love one of those?) you can serve up all summer and fall long.

It's the simple radicchio salad you've always dreamed about, complete with a shower of grated Manchego.

A beautiful, cozy risotto studded with toasted walnuts and fried sage leaves, worthy of your favorite (and most esteemed) company. "This salad had me wanting seconds, and then thirds…" wrote food stylist and cookbook author Melina Hammer of her radicchio salad. You've been warned!

We get it—this roundup is supposed to be all about radicchio, but we'd be remiss if we didn't also call out the wonder of caramelized fennel, tender and earthy-sweet.

A cake made with radicchio, you say? Just trust us on this one. 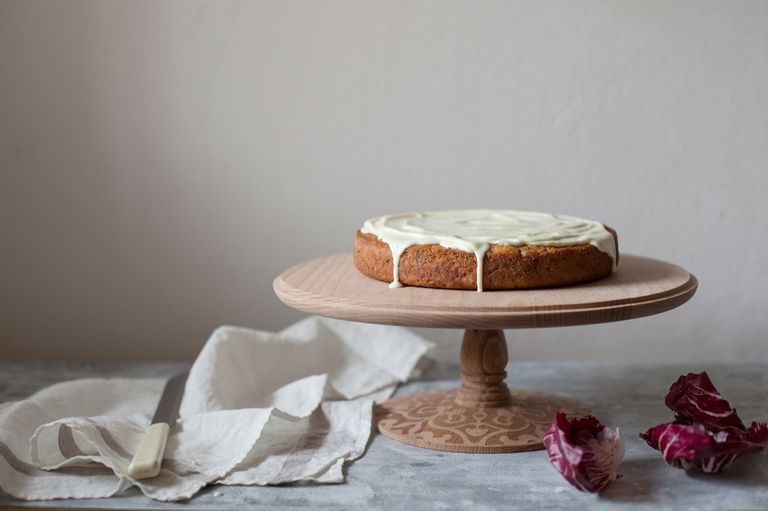 A super-flavorful, Italian-inspired breakfast we'd happily dig in to any morning of the week (or weekend).

Consider this your new favorite pick-me-up work lunch (bonus: Many of the components are make-ahead friendly).

"The radicchio, roasted and marinated, is extremely good without any of the other components—the herbs, the cheese, the dates—that push it over the top," says food writer and editor Sarah Jampel. That being said, it never hurts to go all out. How do you like to use radicchio? Tell us in the comments!

Rocky September 17, 2020
Radicchio Rosso di Treviso; labeled 2: remove loose leaves, cut lengthwise and press in a heated lightly salted cast-iron pan. I put a heavy pot on top to press with a piece of foil paper between the heavy pot and the radicchio (don't be afraid of the condensation created). I suppose if you grill you'll have a foil wrapped brink handy and so you can use that. "Grill" on both sides, serve with a drizzle of olive oil.
Chioggia (labeled 1 in the image): When in season we buy kilos! And prepare several ways. Raw in salad for sure BUT you can... Prep a large pan with a medium (red, yellow or white) finely chopped onion - use olive oil of course. Shred a kilo of radicchio and put into the pan. Don't fret if it is piled up high for it will wilt and reduce. I'll sometimes add a small glass of red wine to the pan to get the radicchio going. Using a wood spoon to mix and a pan to cover & help the radicchio reduce into a poultice. NOW = you can use it to spread on your bruschette OR to make a lasagna(!) OR daub some into your omelet OR top your burger OR just eat it out of your storage container with a spoon.

Rocky September 17, 2020
Not all radicchio is red! It can grow green and or red with green hues...

hobanny December 14, 2014
We cut wedges of radicchio and toss them in olive oil, salt and pepper, and then onto the top rack of the grill they go! They need to grill for some time, so put them on first, grill low and slow, and then finish on the bottom rack next to the meat for a minute or two on each side. The simpler the better!!

alice Y. December 10, 2014
The best radicchio dish I have had is a grilled radicchio and romaine caesar salad at MB Post.

mizerychik December 7, 2014
I love radicchio. My favorite is this stuffed shells recipe - http://www.marthastewart.com/356384/stuffed-shells. The cheese, prosciutto and radicchio makes a delicious combination.

Andrea F. December 6, 2014
Try this: cut a Chioggia in 4 to 8 pieces, salt & pepper it, then roast in a pan with olive oil for 5 minutes, add balsamico winegar and few drops of soy sauce and slow finish it for 30 minutes, covered.

Lynn D. December 6, 2014
I use the method suggested in the Toro Bravo recipe. Soak the radicchio leaves in ice water for 10-15 minutes to remove a bit of the bitterness. Then spin dry and it will be delightfully crisp