Today: An anytime cocktail from Ramona in Brooklyn. 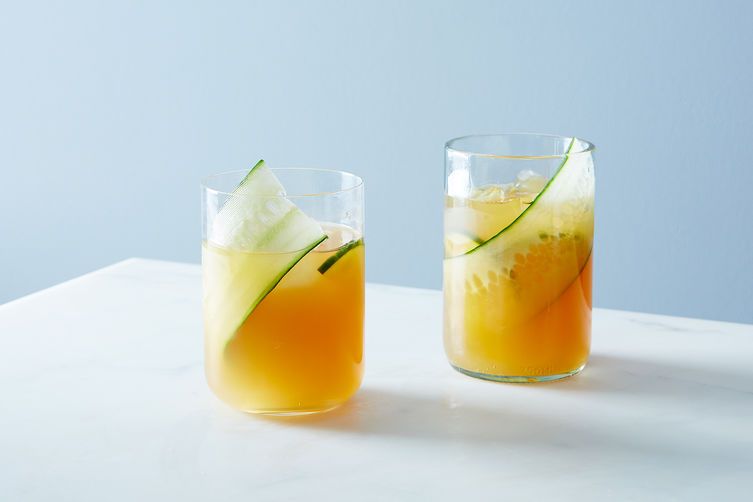 The first time I had this drink was at roughly 3:30 AM, the tail end of a night of both fortunate and haphazard drinking decisions. The cocktail sobered me, albeit in another way than water might have: It woke me to the fact that I was drinking a drink I should be paying attention to. It was generously refreshing, like spiked spa water. It was effervescent (ginger ale). And it was herbaceous, without limp herbs turning it into a swampland—that was two of the liquors saying hello: Velvet Falernum, a low-proof rum from Barbados that’s lightly spiced with cloves, ginger, citrus, and lime, and Pimm’s No. 1, a British gin-based liqueur also bodied by citrus and spice.

Hear “Pimm’s” and most immediately think Pimm’s Cup, a fruity British cocktail that might have apples, cucumber, lemon, strawberries, orange, mint, and so on. While the drink I was so enjoying (apparently an SM Jenkins) has the same affable positivity that can make it and Pimm’s Cup a friend to anyone, it's less of a circus. Instead, a handful of cucumber slices are muddled with the liquids, given a few shakes, and dirty rolled (ie., not strained) into a glass with ice. You could leave it its bare self, unobstructed by a noisy garnish, or you could add a cucumber fan like you’ll find at Ramona in Greenpoint, Brooklyn.

Before Ramona, the drink was a perennial favorite at Elsa in the East Village. After Elsa unexpectedly closed and the owners opened up Ramona, the SM Jenkins (whose namesake is Stephen Malkmus’s pen name on Pavement’s Wowee Zowee) traveled, too. It will and can never leave the menu, says Ramona co-owner Scott Schneider. But it can and should be part of your cocktail repertoire—for both daytime and very late-night drinking, if you ask me.

Janie May 17, 2015
Pimms is not a cocktail, but a long, refreshing alcoholic summer (usually) drink... If you add Falernum to your mixture, all the taste of Pimms will be eradicated..

Sue B. May 13, 2015
Typo? First ingredient should be ginger ale?
Author Comment