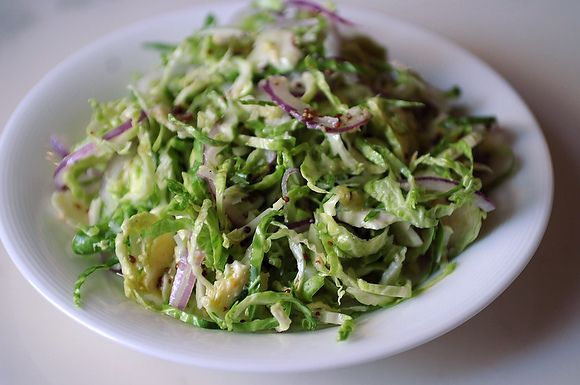 A few weeks ago while having dinner at one of our favorite neighborhood restaurants, Stone Park Cafe, my husband and I shared one of those rare and wonderful dishes that grabs hold of your taste buds and doesn't let go. It was simplicity itself: delicately shaved raw Brussels sprouts with wisps of red onion, a light, lemony dressing spiked generously with whole grain mustard, and a generous hit of tangy Pecorino. I immediately declared that I would try and replicate it at home, and this was met with great enthusiasm by my husband.

It pains me to admit that with my first attempt I couldn't resist the urge to take an ill-advised shortcut. The salad wasn't the only thing on the menu that night, and I was feeling a little harried, so instead of doing what I should have done and using a mandoline to shave the sprouts into perfect, dainty shards, I instead dumped the them into the food processor and pulsed until they resembled coarse green sawdust. Mistake.

Although I had taken the time to fiddle with the dressing, adding some honey to soften the acid from the lemon and mustard, and had soaked my onion slices in water to soften their sting, the texture of the resulting salad was all wrong. It felt a little like chewing on mulch -- tasty mulch, but mulch nonetheless.

The second time around, I took the extra few minutes to shave the sprouts properly, one at a time, using a mandoline. Yes, it takes a little longer -- and I wouldn't recommend making this salad for more than six people. But it's so worth it. I'd serve this as a first course, with a nice, crisp white like Gruner Veltliner.

1. Soak the onion slices in a small bowl of cold water for 15 to 20 minutes while you prepare the rest of the ingredients.
2. In a small bowl, whisk together the lemon juice, honey, mustard and a pinch of salt and pepper. Whisk in the olive oil until the dressing is emulsified. Set aside.
3. Trim all of the Brussels sprouts, cutting off any bruised outer leaves and slicing off a good portion of the hard root end. Using a mandoline, shave the sprouts one at a time. When you're done, use your fingers to gently separate the leaves so that the shredded sprouts resemble a very fine slaw.
4. Put the sprouts in a serving bowl and toss gently with the onions (which you've now drained) and the dressing. Fold in the pecorino, taste and adjust seasonings if necessary. Serve immediately, before it starts to wilt!

Soupy September 29, 2011
I made this for Thanksgiving, 2010, and everyone raved about it. I am so grateful I discovered this recipe.

Now, what can I "wow" and surprise people with this year?

chef C. January 16, 2011
Can not wait to make this for my church group for fasting dinner, hope they like it, better yet, I hope that I like it!

maryvelasquez December 6, 2010
I am completely addicted. I will never eat Brussels sprouts any other way. I did make one substitution that was interesting. I replaced the honey with a few spoonfuls of spicy apple butter (I have vats and I am trying to use it up). I enjoyed the autumn undertones.

AmyW November 15, 2010
I made this to take to a friend's for dinner Saturday night and all four of us dislike brussel sprouts to some degree and none of us had eaten them raw before. It played to rave reviews, so kudos on this one!

PeterBeynon November 15, 2010
The salad sounds great, especially since a raw sprout will never take on the sulfurous taste an overcooked sprout does.

To cb1984 and others wary of their fingertips (and skeptical about the efficacy of the guard with their Benriner). one of my students wears an oven mitt. I guess it works, as long as you're careful not to shred the mitt too.

SweetM November 14, 2010
I'm so excited to see this recipe! I just had a similar salad at Michael Chiarello's Bottega in Napa, but he serves it with marcona almonds and sieved egg rather than red onion. Quite delicious!

BiCoastalCook November 14, 2010
Another variation on this theme: the warm salad of shaved Brussels sprouts, little diced bits of locally-cured ham, halved red grapes, tossed in a cider vinaigrette and garnished with a lovely curving slice of ricotta salata. We eat this salad all fall/winter long at Passionfish in Pacific Grove CA. The sprouts are grown right around here and are so fresh and delicious and sweet...

PFossil November 14, 2010
Question - hope this isn't too idiotic, but why can't I save your recipes or Amanda's? I'm helplessly in search of the "save" button.

MadeInMaine November 18, 2010
Great question, PFossil! I was wondering the same thing. Seems to me I've seen a "save" button somewhere here, but if there is, where do you go to FIND the saved items! :((

Merrill S. December 6, 2010
Not idiotic at all! You can save our recipes once they appear in the recipe database -- usually a few days after our blog entries are posted. Sorry, we're working on a better solution! And MadeInMaine, you go to your profile page to see your saved recipes.

Daphne November 12, 2010
Thanks for the recipe, Merrill! We made this for a late lunch/light dinner a couple days ago and paired it with thin slices of good salami. A few brussels sprouts go a long way for two or three people here. We used our light weight, cheaper mandoline and it was easy....

georgepaul November 12, 2010
I just made this...awesome! The grated cheese makes it very satisfying, though I used grana padano because that's what I had in the fridge.

Merrill S. December 6, 2010
Sounds like a perfect substitution to me!

jotarz November 10, 2010
Stone Park rocks! Love to go when I am home in Brooklyn....this recipe looks amazing- Brussels sprouts are so much better when shredded or even when you pull the leaves apart then saute them. Am definitely going to try this one! Thanks!! :)

pickles November 10, 2010
Reminds me of this salad...http://www.101cookbooks.com/archives/brussels-sprout-salad-recipe.html which is one of my favorites. I haven't tried her suggested variation with sharp cheddar and apples but it also sounds great.

sweettarte November 9, 2010
You read my mind--I had this salad there on Friday night and haven't been able to stop thinking about it since! I have a big bag of Brussels Sprouts in the refrigerator and am definitely going to give this recipe a go. Thank you!

Merrill S. December 6, 2010
What a great coincidence -- so glad someone else got to experience the goodness!

mrslarkin November 9, 2010
Oh, how I love raw Brussels sprouts! Thanks for this recipe, Merrill! FYI, it does work pretty well with the slicing blade of the Cuisinart. Probably not as thinly shaved as you'd get with a mandoline, but pretty darn close. Here's a photo of mine done with Cuisinart: http://www.food52.com/recipes/1710_brussels_sprout_salad_take_2

Rhonda35 November 9, 2010
Merrill - Wondering why you didn't use the mandoline to slice the onion? It would give very thin slices, but maybe I am missing some key culinary info?! Thank you for taking the time to recreate something you enjoyed at a restaurant - it allows us non-New Yorkers to get a taste of what's happening in NYC's food world. Can't wait to try this - LOVE Brussels sprouts!

Merrill S. November 15, 2010
Great idea! I think maybe I take perverse pleasure in seeing how thinly I can slice an onion by hand. But there's no reason not to use the mandoline!

lemontart November 9, 2010
Yay, a great new thing to do with the brussel sprouts in the fridge. Looks so good! Have hated brussel sprouts since forever until had them roasted in duck fat last year. This looks like yet another way to enjoy a new love!

lemontart November 10, 2010
ABSOLUTELY LOVE this recipe. Thank you thank you!

pickle S. November 9, 2010
Can you use a Vitamix to wet chop the brussels sprouts? I don't have a mandoline. Looks great.

Oui, C. November 9, 2010
This looks brilliant and delicious, and will be an excellent way of fooling the kids into eating the always dreaded BRUSSELS SPROUTS. Thanks - S