How to Do Right By Kansas City Barbecue

We take on K.C. barbecue—from sit-down restaurants to hidden gems in filling stations, and everything in between. 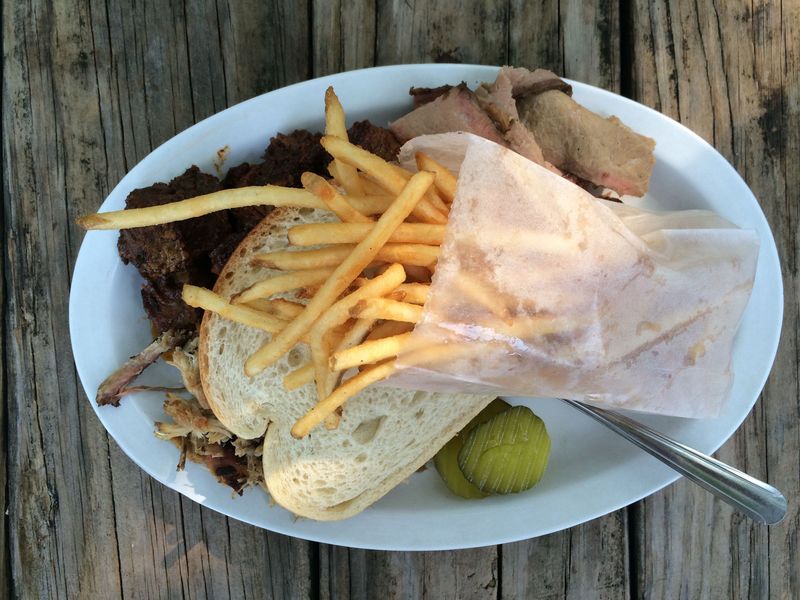 Like many little sisters of the world, I seriously look up to my big brother, Willie. No matter how much time passes, there are some questions I'll always take to him first—like, say, when I wanted to take a tour of the best of Kansas City barbecue.

Hailing from the nearby college town of Lawrence, I'm no stranger to the K.C. barbecue scene, but I moved to the East Coast at 18. Enter Willie: Just a few hours after I asked him for advice, the best email I ever received landed in my inbox. Partially because the topic had my stomach growling two sentences in, but mostly because of the depth of the reply: My brother knew his stuff, and I almost could have copied and pasted the whole email right here and saved myself the trouble. But I wanted an excuse to barbecue hop. 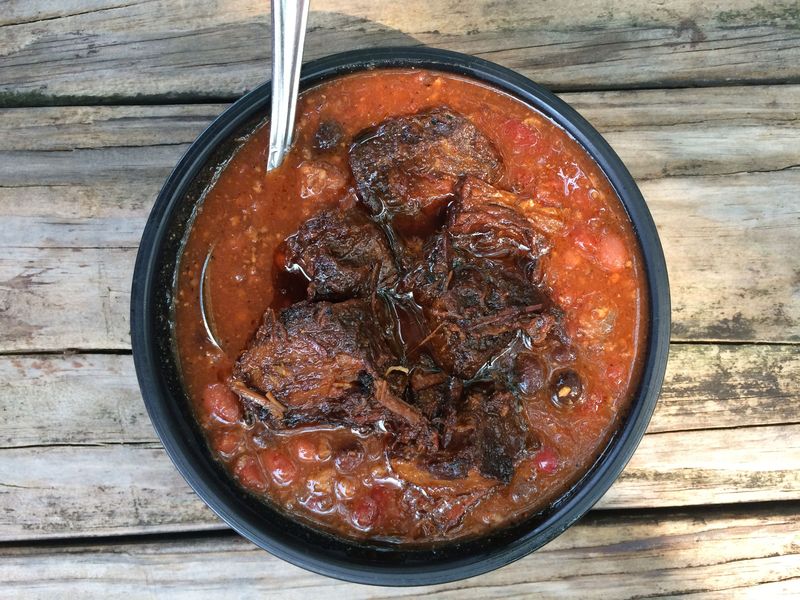 First thing's first: What makes Kansas City barbecue?
For one thing, everything. While other barbecue hubs may tend to favor one kind of meat, K.C. does it all: pork, beef, chicken, and sausage all fly here. When I pushed my brother to choose the meats that most represent this place, he begrudgingly chose ribs and burnt ends (in my opinion, the most glorious of all barbecue). Sauces can vary too. K.C. sauce is thick and tomatoey, boasting a certain sweetness but plenty of vinegar, too. No matter where you go, pickles are not optional (okay, they are—but they shouldn't be). Bread, where it appears, is soft, white, and often toasted and buttered for good measure. And sides are varied, but help define the style of each location. My brother did say one side ruled the rest: fries. (My sub challenge? To find Kansas City's crispiest fry of all.)

After eating as much smoked meat and sides as I could physically manage, I can attest that Kansas City barbecue—classic, modern, and everything in between—is worth the trip. Here are my five favorite places—plus some shout outs to some other worthwhile haunts. (Don't be confused by the locations across state lines; you can easily hit multiple places in one day.) But beware: This tour is not for the faint of heart, or light of appetite. 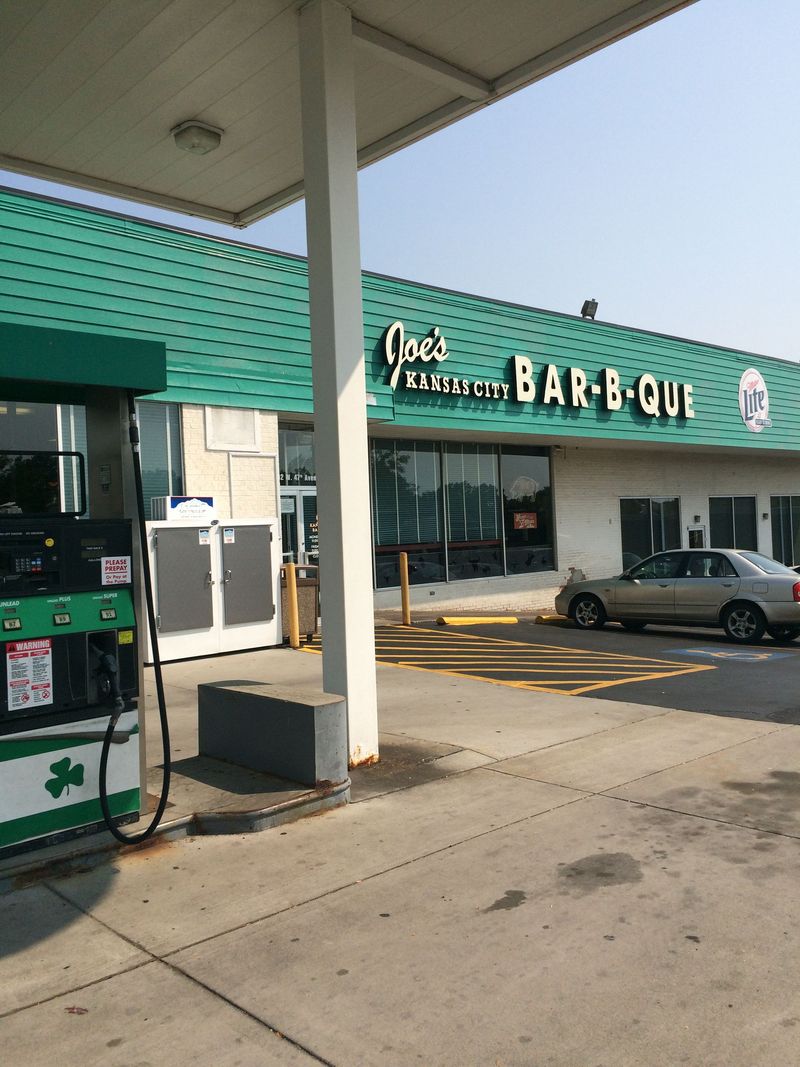 This list shouldn't exist without one name: Joe's Kansas City (formerly known as Oklahoma Joe's). It's classic for a reason—and even with three locations throughout K.C., there's always a line. We opted for the original—which can be found inside a filling station for just the right vibe of K.C. authenticity—and boasts a wall of different barbecue sauces for sale just inside the door. This knockout is known across the board for its killer meat. It's juicy, moist, flavorful, and generally so good that you could eat it without sauce altogether. Not that you'd want to—their sauce has an amazing smokiness and just the right amount of sweetness. (And to satisfy heat lovers like me, it's available in a spicy version alongside their regular.)

We gorged on ribs, pulled pork, sausage, and brisket, and each lived up to the hype. Their "Z Man" sandwich is also worth a try. And don't miss their spicy slaw, red rice and beans, and crazy crispy onion rings. There's a reason Joe's is beloved (it's even on Anthony Bourdain's list of 13 places to eat before you die!). Pro tip: If you're not a fan of the long lines and limited seating, you can always call ahead for pick up. 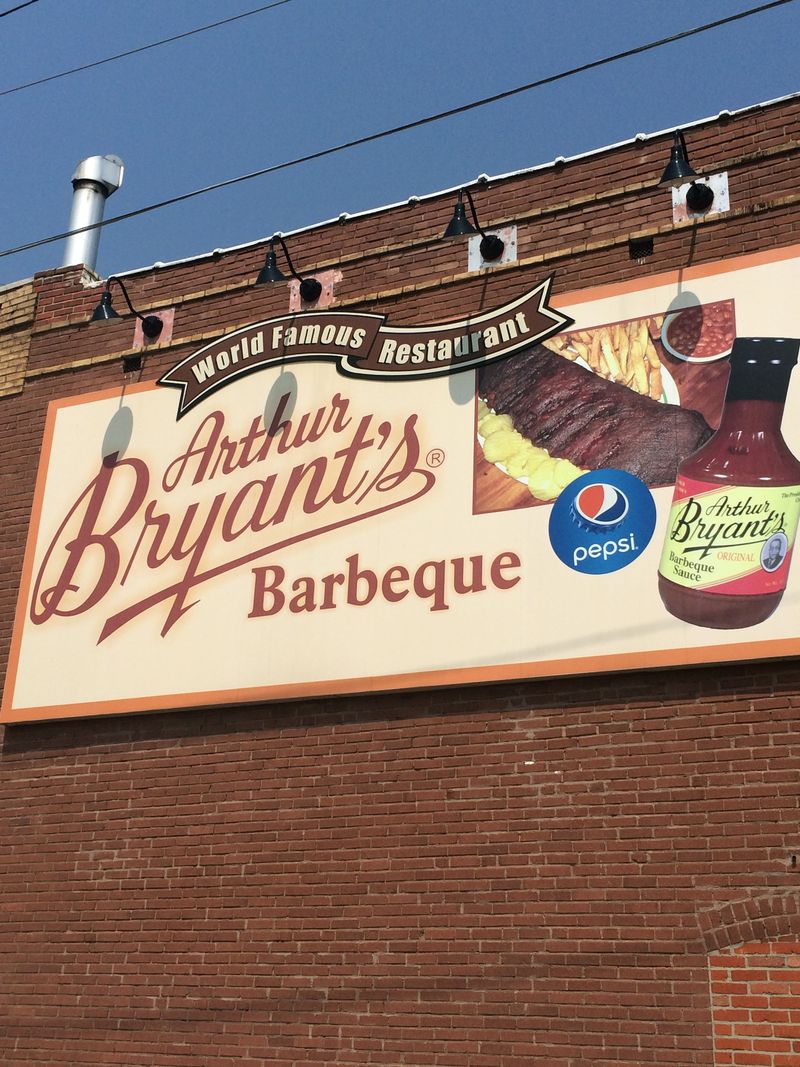 Walking into Arthur Bryant's is like coming home after winning a baseball game and finding everyone cheering for you. You stand in a line leading up to a window where servers are cranking out orders at lightning speed—and serving up wisecracks alongside. My brother said sandwiches were the name of the game here, and I immediately saw why: These bad boys were towering (plus they were a bargain)!

We opted for sausage and brisket plus plenty of fries. The sausage blew my mind: It was formed and smoked in huge, 3-inch wide and 2-foot long logs, then sliced and piled onto bread. Their sauce was simple but well balanced, and according to my server, as he doused my order, meant to be consumed liberally. There's two locations, but word on the street is the second spot isn't up to the standards of the original. Unlike other K.C. favorites, Arthur Bryant's may actually be more crowded during the week, due to a loyal downtown lunch crowd—but if there's a line, it'll move fast.

Also try: Danny Edward's, also known for their sandwiches and always bustling—open for lunch only. 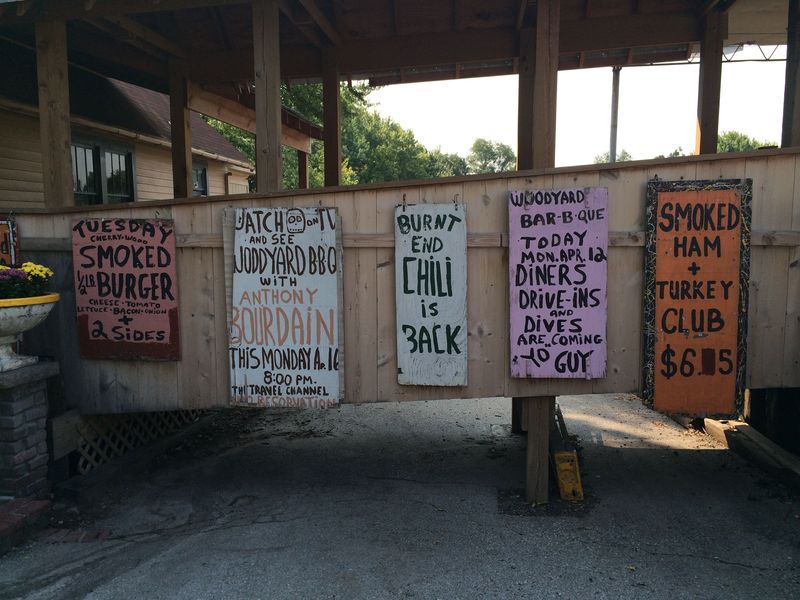 The Woodyard was our very first stop, and we were the only guests come open time. Mostly outside (but much of it covered and/or shaded), it was certainly the prettiest barbecue joint I've ever been to. Situated on an actual lumber yard, piles and piles of wood are stacked in the back lot. In the front, their outdoor smokers are churning at all times, providing that perfectly smoky smell. And the smoker on duty will gladly give you a peek inside if you ask nicely.

Their offerings lived up to the aromas: We had well-seasoned and spiced ribs, pulled pork, brisket, and burnt ends. Unlike Joe's, we needed Woodyard's sauce to keep things moist, but the sauce was thick, tangy, and delicious (another nod for their spicy version). I also couldn't resist an order of their burnt end chili, which was a smoky bowl of beans topped with a generous scoop of ends. Their sides weren't our favorite (though the corn was stellar)—but their fries actually won my award for best of the day. Thin, crisp, and perfectly seasoned—I'm still dreaming about them. 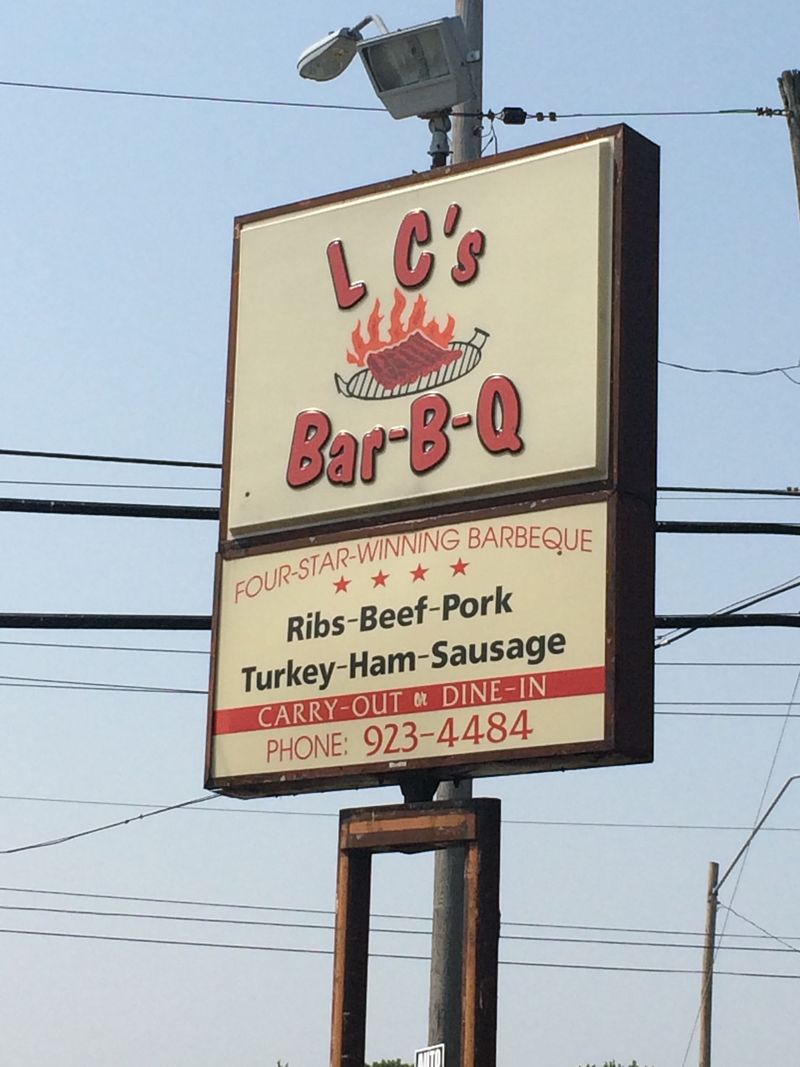 LC’s Bar-B-Q is one of the few actual, wonderful dives left, and it’s a rare breed of under-hyped in the K.C. scene. (My brother has even brought me LC’s when picking me up at the airport.) This no-nonsense place is all about the food. Seriously—this place has no website, just a whole bunch of much-loved ratings. The dining room is small and sparse, and you’ll usually see one of the same four people behind the counter.

The menu is short but sweet. We ordered the burnt ends (a must here, and my favorite of all the ends in K.C.), plus a big pile of brisket. They rock the good old fashioned steak fries, which are seasoned with a spice blend, and their sauce is on the thinner side—vinegary and good enough to eat with a spoon. But I’m a big fan of their Southern-style sides, including fried okra and mushrooms, which are dredged in a super crunchy cornmeal batter and fried until perfectly golden. If you want solid barbecue (and likely no wait at all), this is the place. If you want a stylish place to sit and eat, this may not be your jam—but you can always place an order to go and find a more scenic spot to dig in. 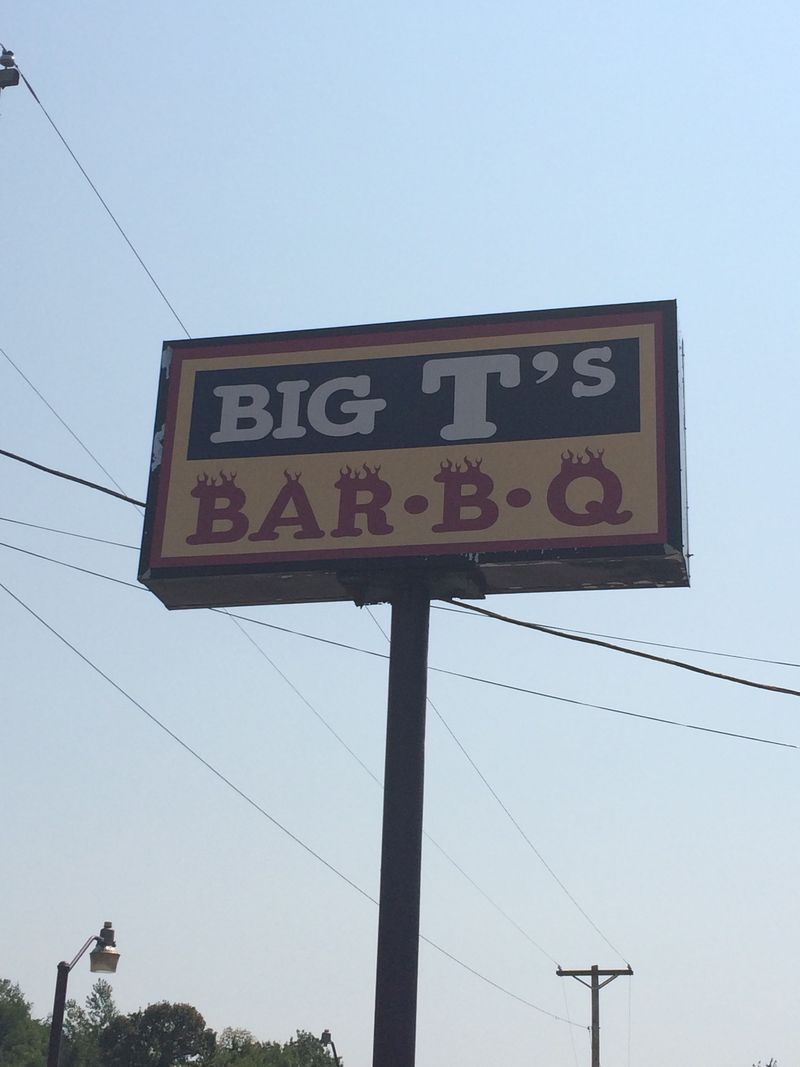 Big T’s Bar B Q is another one that’s probably not on many folks’ “must eat” list, but there’s a bunch of reasons it should be. First off: variety. The menu is huge and there are a ton of combo options, whether you’re looking for sandwiches, plates, or meat by the pound. Their sides are pretty by-the-book (slaw, beans, corn, and so on), but solid. They’re also one of the only spots we visited that offered desserts. The staff was friendly and the dining room is pretty huge compared to the others on this list. And because it’s a little out of the way (and I do mean just a little), it’s often not crowded, making it my number one pick for large groups and/or kids. Get a table—or two—and feel free to take your time.

Also try: RJ’s Bob-Be-Que is another standby for dining in or carrying out. Bonus points for their patio and live music in the evenings.

Do you have a favorite K.C. spot not on this list? Tell us in the comments!

erinjeannemcdowell.com
I always carry three kinds of hot sauce in my purse. I have a soft spot for making people their favorite dessert, especially if it's pie. My first cookbook, The Fearless Baker, is out on October 24, 2017.

Laura W. October 29, 2015
I have never liked Arthur Bryant's, I love Rosedales lean brisket and their fries, don't like most of their other sides. I love Jackstack especially for the first place to take out of towners before they try a more basic place, I've never had a bad meal at any of their locations. But you really don't find much bad BBQ in Kansas City, if it is, they don't last. I'm a brisket fan, and I love places that put meat in their beans, Jackstack's are some of the best.

Mark L. October 28, 2015
When I would visit KC for work I'd always try to stop by Lil' Jakes for their terrific burnt ends and wonderful sauce. Unfortunately they're gone, but I hope that Lil' Jake's owner Danny Edwards is carrying on the food tradition at his place.

FoodieChic September 27, 2015
Smokin' Joes on Santa Fe in Olathe is great and the ribs are awesome.

Sandy P. September 22, 2015
My family likes gates, for their large portions, three or four versions of sauce and they're friendly consistency. Personally I love Gates because their sauce is the least sweet in town and because their onion rings rock.

Doug R. September 22, 2015
You've got my stomach growling. Joe's is the best BBQ I've ever had, bar none. We've been known to drive 200 miles out of our way just to have the chance to eat there. I enjoy Gates as well, but for all that I've heard people rave, I've never enjoyed Arthur Bryant's.

Zach G. September 21, 2015
I live here! Joe's is definitely the best. I absolutely love their burnt ends. I'd have to say the best ribs are at Hickory Log, though, in a bit of a run down area of KCK.

E E. September 21, 2015
Wow, what a great round up of KC barbeque. Joe's is top of my list too. It's worth the wait. In the humble category there is a Wyandotte 2 just off of Metcalf in Overland Park.