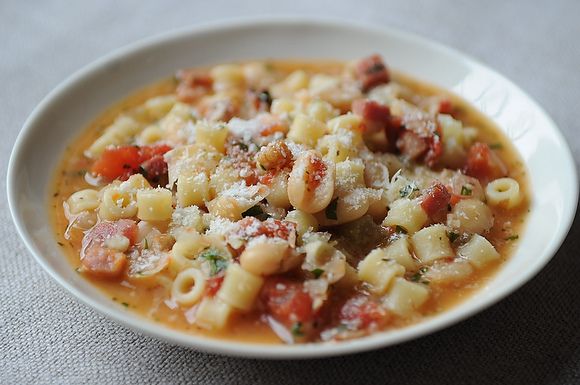 Jenny is a person who takes time to adjust. New cities never suit her at first; she sees lack of fresh rosemary and poor sentence structure in road signage before she sees new shades of sunsets or fine running paths. She has never liked a new job, at least not the first year. While the rest of her family giggles and ooohs over a new puppy, she imagines chewed chair legs and potty training surprises left behind a couch.

Too often than she cares to admit, she stands apart from new people, too, eyes narrowed, waiting for a reason to warm up. These are all bad habits, almost as bad as referring to oneself in the third person, which will stop right here.

Be all of that as it may, one thing I easily and often fall for is a new dish. Sometimes because it provides an interesting marriage of flavors I have never considered, or such incredible ease that I feel liberated by it. But Pasta e Fagioli is just deeply pleasant, completely familiar, and a great weeknight option for those rooting around their larder wondering what the heck to do.

My guess is that everyone who cooks pasta e fagioli has a recipe they favor, and probably does not like it messed with. Some of you may recall when I had the temerity to write about Pasta Carbonara with Fresh Green Beans, which set off a foodie controversy only slightly less contentious than the START treaty Senate debate. But this is just a version of some pasta soup you have made at some point and forgotten about, so here it is, a reminder of gentle goodness.

The most important point here is that you have most of these ingredients lying around, although I don’t know many people who randomly stock celery, so you may need to pick some things up.

Here are my variations: I had turkey stock frozen from Thanksgiving, so that went in instead of chicken. God has not blessed me with a store that carries ditalini, so I used conchigliette. You knock yourself out with whatever small noodle you can find.

From here, QueenOfGreen lays it out quite simply. Simmer. Stir. Add cheese (lots of it, and black pepper and a shake of red pepper flakes if that is how you like it). Feast indeed.

1. In a heavy saucepan cook bacon over moderate heat, stirring until crisp. Add onion and garlic, stirring until onion is soft and transparent. Add celery. Add broth and simmer, covered, for 5 minutes.

2. In a bowl mash 1/3 of the beans, then stir them into the onion mixture along with the remaining whole beans and tomatoes. Simmer the soup, covered for 15 minutes, or until pasta is al dente. Then remove from heat and let stand, still covered, for 5 minutes.

3. Stir in parsley and top with (lots of!) Parmesan. Feast.

Kate V. August 23, 2017
Thank you for the beautiful, nostalgic recipe. I've made mine vegetarian and it takes just like my aunties' would have made.

kissy28c February 11, 2011
Hi I just wanted to let you know that since you posted this recipe, my husband and I have made it twice and we plan to make it again tonight. We mostly stick to your recipe (adding fresh tomatoes and just a touch more bacon - Applegate organic sunday bacon is awesome - for smokiness) and it's fantastic every time. Thanks so much for sharing your great ideas.

enthous February 1, 2011
I'm a second generation Italian American and have always made my mother's version, which is much more strongly tomato-based. This was really delicious and a nice change for us. I also used pancetta, which doesn't overtake the subtle flavors, and threw in a small parmesan rind and a sprig of fresh rosemary. The rosemary added a beautiful aromatic layer that we enjoyed.

QueenOfGreen February 1, 2011
Ooh! I like the sound of that! Might have to try your modifications myself soon!

rjoskow January 24, 2011
I feel very silly asking, but do you cook the ditalini in the soup, or separately?

QueenOfGreen January 24, 2011
Just toss them uncooked into the soup! They'll cook in there!

Jane E. January 23, 2011
This is great; I will make it--and it looks like a real weeknight dish. Quite do-able. The first time I had this was in Naples forty years ago, and the hostess threw in great gouts of olive oil and raw garlic and hot red peppers by the handful. It was certainly a mouth explosion for me, who until then had never even put black pepper on my food. I have done my best to reproduce it at home. I think the original had a cheese rind in it as well. Thanks for the recipe.

mrslarkin January 24, 2011
yes! parmigiano cheese rind! stash them in a ziploc in your freezer. don't ever throw them out. this is the perfect soup for a hunk o cheese rind.

Q: do you cook the pasta right in with the soup, or separately?

innoabrd January 20, 2011
Looks yummy. Maybe when it starts to get cold again here. If I was in the US, I'd use pancetta too. Most american bacon is crap. Too much artificial smoke flavour, not to mention sugar and brine. Unless you can find a good unsmoked, dry-cure bacon, pancetta gives you more of the essence of pork, IMO.

We have the same strangest food in our profiles! How about that?

Jestei January 23, 2011
i know. i am jealous of people who have eaten sea snails tho

fearlessem January 18, 2011
Just made this tonight and it was so good! Quick, easy, and flavorful. I used pancetta instead of bacon since I prefer it in this type of soup, but otherwise made no changes... Thanks for a great weeknight recipe!

Jestei January 19, 2011
interesting -- what about pancetta do you find preferable, as i have pondered this many times. i am glad you enjoyed this dish!

fearlessem January 19, 2011
I think I prefer Pancetta because in a dish with otherwise mild flavors -- celery, white beans, pasta -- I often find that bacon winds up dominating more than I'd like it to. Pancetta has the saltiness and the porkiness without the in-your-faceness! But again -- fabulous recipe -- my husband was raving about it all night.

mklug January 18, 2011
Also check out Grobals--they're self-watering-ish mod looking little pots that have managed to save some herbs from my death hands...BTW, my New Year's resolution--one of many--was to refer to myself more often in the third person and such (love the movie "The Queen"). Have befuddled some of my clients, though, by saying things like, "Your attorney would suggest you take the plea" and having them want to know where that attorney is.

Jestei January 19, 2011
your jenny is grateful for the grobals suggestion!

Rhonda35 January 18, 2011
I always have celery! It's a good kid-friendly snack and my vehicle for ingesting large quantities of blue cheese dressing.
I'm going to give this soup a try; I grew up around Italian-American families who made a big deal out of this soup - whose version was the right one, etc. I never really understood all the fuss. Yet, there must be something sublime or comforting about it to cause all the debate. So, I will give it a shot.
Regarding herbs in the Midlantic area: you can plant everything except basil in April. By May, it is pretty hot and hard for the roots to get going. Basil can go in once there is no worry of frost. I kill everything I plant, too, but I have managed to keep my herbs going - knock on wood.

Rhonda35 January 18, 2011
P.S. Good luck with the puppy - crate train and you won't have too many messes. I was completely against getting a dog two years ago. I lost the battle and we got a lab. Now I have two because I love them so much! So, there is hope.

Jestei January 18, 2011
I love food52 precisely for tips on celery and gardens and crating and the like. It's just the best community! xx oo

TheWimpyVegetarian January 18, 2011
What a perfect comfort soup! Made this for dinner tonight but made a couple changes based on what was in my kitchen. I had a couple carrots and some dino kale I really needed to use for something, so they got thrown into the mix. And I made a fresh vegetable stock for it since I didn't have any chix stock around. Everything else I kept the same as the recipe. Love, love, love it. Can't wait for leftovers for tomorrow's lunch! Thanks for spotlighting such a perfect winter-time recipe!!!

Jestei January 18, 2011
I think kale would be a FANTASTIC addition and a great use of what is in the markets.

ronpots2 January 17, 2011
I made this for supper tonight and it was delicious! My wife came home from work and said, "Something smells good". She loved it. I ended up using 2 cans (28 oz total) of chicken broth. Wonderful w. the red pepper flakes and cheese added at the end. This will be going into our 'favorite recipes' for sure. Thanks!

Jestei January 18, 2011
nothing makes me more thrilled than reading comments from food52ers who feel inspired to go ahead and actually make the dish THAT NIGHT! thank you so much; i am thrilled you enjoyed it and i am sure queenofgreen is too.

ginam January 17, 2011
Perfect timing. I was just looking for something warm for my sick girl tonight.

Soozll January 17, 2011
Holy moly! SoCal to Wash. DC? When you make a change, you really make a change, no wonder you have a hard time adjusting! I made the reverse change..DC metro to NorCal, and have never looked back longingly, though many do (I can't even imagine that!)

I've heard a lot of love spoken about this pasta dish, but have never tried it. Will now! Thanks.

mcs3000 January 17, 2011
Love dishes like this where no shopping is needed (will just skip the celery). Gentle goodness indeed. And hang in there - cherry blossoms are coming - and even our beloved California can't match that grandeur.

@mrslarkin - thanks for the celery foil tip!

Jestei January 17, 2011
yes it's true. i am waiting for spring, and pondering snow sports. xx oo

TheWimpyVegetarian January 17, 2011
Thanks for profiling this recipe! It's perfect for tonight's dinner! What kind of puppy? We're between dogs right now and am having mixed emotions about starting all over again. I love them so much but don't miss some of the ownership responsibilities....

Jestei January 17, 2011
cockapoo. the issue in this house is the LACK of mixed emotions: the kids want it and i don't. so. guess who won. one more mouth to feed. i am sure i will be in love.....eventually.:)

TheWimpyVegetarian January 17, 2011
I'm sure you will be too - just takes a little while through the whole puppyhood thing. But it's worth it when you end up with a dog that's just a great companion :-)

mrslarkin January 17, 2011
Nice soup! I always stock celery in the veggie drawer (wrap it in aluminum foil to keep longer.) A new puppy? For serious??

Jestei January 17, 2011
thanks for that tip. i wondered how to make that happen. yes. puppy. sigh.

drbabs January 17, 2011
For somebody who doesn't take well to change, you sure have put a lot on your plate.

QueenOfGreen January 17, 2011
What a surprise! Thank you, Jenny!

Jestei January 17, 2011
I look forward to cooking more of your recipes.

drbabs January 17, 2011
Thanks for the reminder about something easy and good to make on one of those (too many) cold nights when you get home from work and wonder what to make for dinner.