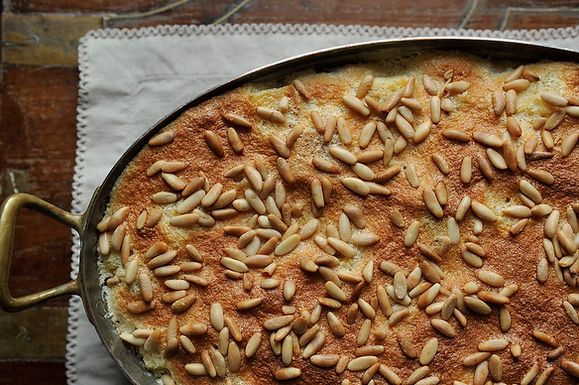 Wcfoodies won this week's contest for Your Best Onion or Garlic Soup with French Onion Soup. 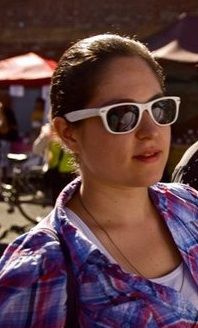 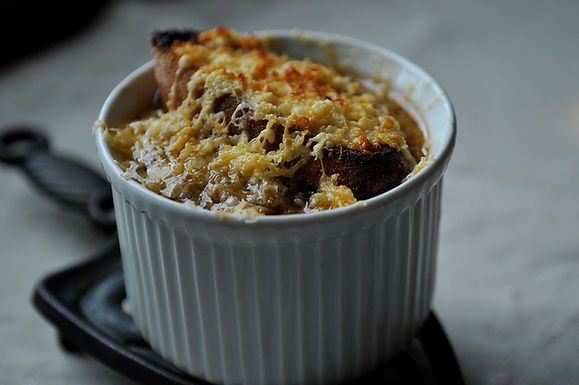 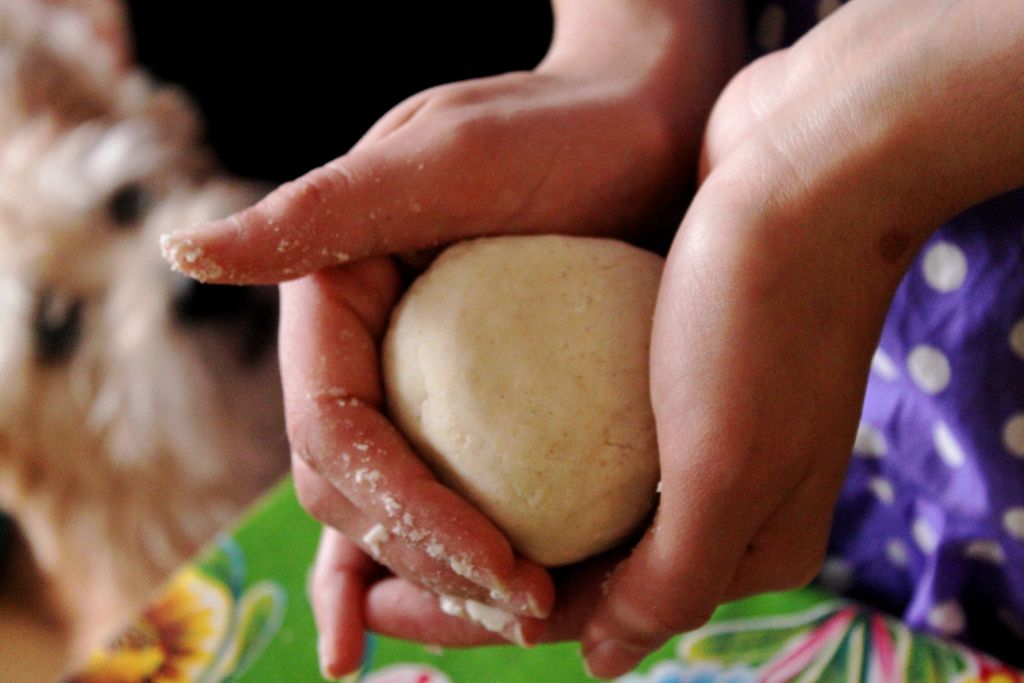 Describe an early food experience that has influenced the way you think about food and/or cooking.
I spent many summers, spring breaks and Saturdays in my grandmother’s kitchen. She was not a gourmet cook, but she put so much care and attention into preparing the food just the way we liked it and always let us help in the kitchen. And then there was the Blue Soup incident...when my brother and I made dinner for my parents. We were 6 and 8 years old, how were we supposed to know that purple cabbage would turn the soup blue? My parents ate and (pretended) to enjoy it anyway. I owe my culinary boldness to my parents allowing us to play in the kitchen.

What's your least favorite food?
Plain oatmeal made with water instead of milk; but does anyone like bland mush?

What is the best thing you've made so far this year?
Homemade vegan black bean burgers, which even my meat-loving boyfriend enjoyed!

Describe your most spectacular kitchen disaster.
As a teenager, I decided to make a batch of biscochitos (traditional New Mexican cookie) as a gift for my then-boyfriend’s family. Because I was in a rush, I accidentally flavored the dough with caraway seed instead of anise seed. What should’ve been cinnamon-sugar, licorice flavored cookies ended up tasting like rye bread! Luckily, my younger brother and mom came to my rescue and helped me prepare, rollout and cut an entirely new batch in record time.

What is your idea of comfort food?
A big bowl of whole pinto beans and Hatch green chile stew.

What's your favorite food-related scene in a movie?
The scene in “Frida” where she wakes up the morning after the honeymoon and finds her new husband, Diego, feasting on a wonderful breakfast. Frida joins him at the table and sighs with pleasure as she takes a bite. Very impressed, she compliments him on mastering ‘Lupe’s special recipe,’ only to learn that Diego’s ex-wife Lupe, who lives in the apartment above theirs, had cooked the breakfast and brought it downstairs while Frida was sleeping. In a fury, Frida sweeps the mostly untouched food into the trash and marches upstairs to let Lupe know that she’s here to stay, and to stay out of her kitchen. “You like my mole?” Lupe asks, “Well, he lives for it. If you're here to stay, you better learn how to make it.” Then, the two women end up bonding and developing a sense of camaraderie as Lupe teaches Frida how to prepare Diego’s favorite meal.

If you could make a show-stopping dinner for one person, living or dead, who would it be?
I can’t choose just one! I’d fly my parents, brother, godmother and my boyfriend’s parents out to New York, squeeze them into our tiny Harlem apartment and cook them my standard dinner party meal: roast chicken in pípan sauce.

You prefer to cook: a. alone b. with others c. it depends on your mood.
C: Depends on my mood. Sometimes cooking is my alone time, sometimes it’s our date night and sometimes it’s an opportunity to learn a new recipe from a friend.

When it comes to tidying up, you usually: a. clean as you cook, b. do all the dishes once you've finished cooking, c. leave the kitchen a shambles for your spouse/roommate/kids to clean.
A mix of (a) and (c) if that’s possible, but my beau Alex always ends up doing the dishes.

Describe an early food experience that has influenced the way you think about food and/or cooking.
Every Sunday, my family would go over to my aunt and uncle's house in the early afternoon and stay until late in the evening. There was always food--from artisan crackers and small-farm cheese to snack on during whatever sport was on TV, to delicious beef briskets, heirloom tomato and mozzarella salads, or mountains of paella, depending on the time of year. So, as a kid, I always experienced food as strong component of family, love, or togetherness. And I think that's the best thing food does: it brings us together, helps us in our celebrations, and is one of the most satisfying ways to let someone know you love them.

What's your least favorite food?
It has to be hamburgers, I think. I've had some good hamburgers, but I never crave one, and never feel good after eating one. I've never had a hamburger and felt happy afterwards. It's not a food that brings me any joy.

What is the best thing you've made so far this year?
Polenta with mushroom ragu and a poached egg. I got all of the ingredients at the green market on a cold, slushy, blustery day, went home, and within an hour I was sitting down to this incredibly rich, hearty, comforting--but not heavy or greasy--brunch. I used coarse-ground polenta that kept its thick, nutty texture even when it was fully cooked; the mushrooms, sauteed with garlic and shallots and fresh thyme and rosemary, were sweet and rich; and when I broke open the poached farm egg, the yolk mixed in with the polenta and the mushrooms to create a gorgeous, creamy sauce.

Describe your most spectacular kitchen disaster.
Aside from occasionally swiping off a chunk of a fingertip here and there? A few Thanksgivings ago, my boyfriend and I were at his parents' country house. They have two ovens, one of which is a gorgeous old open-flame oven from the 1920s. I was in charge of desserts and down to the wire;  I needed an oven for my graham cracker crust (homemade) bourbon-spiked, pecan-topped pumpkin pie, kind of a specialty dish of mine, and one that had been highly requested by the entire family. In a panic, I popped the pie into the old antique oven and turned the flame up to medium. I should point out here that the oven doesn't have a temperature gauge...something I probably should have taken into consideration first. 15 minutes into dinner, everyone pauses and sniffs the air: the unmistakable scent of BURNING was filling the room. I leapt up, ran to the kitchen, and pulled out what should have been a gorgeous, toasty-brown pie, but what was, instead, a glass pie dish full of sticky black gunk. I wasn't allowed to live the Pie Death down, and I had to throw out one of my boyfriend's mom's prettiest glass pie dishes. Fail!

What is your idea of comfort food?
Something simple and rich--which is not to say heavy or greasy. A big bowl of pasta with butter, parmesan, and thyme is a fantastic comfort food. Anything with a runny egg yolk. Things that are warm and soft on the tongue.

Apron or no apron?
No apron! They get in the way, especially the full-length ones; they pull on my neck. I keep a clean dishcloth tucked into my belt when I cook.

What's your favorite food-related scene in a movie?
The lobster scene from "Annie Hall," no contest.

If you could make a show-stopping dinner for one person, living or dead, who would it be?
It sounds really sappy, but my boyfriend. He's a great cook, and we really enjoy cooking together or for each other. Plus, we're both extremely opinionated, and often disagree about key components of a dish. It's actually kind of fun to argue about food with him; it keeps my thinking about food sharp and focused.

You prefer to cook: a. alone, b. with others, c. it depends on your mood.
B: Cooking alone is fun (especially if it means you don't have to do all the dishes alone), but I like cooking with others. I enjoy the teamwork and the flow of a good kitchen.

When it comes to tidying up, you usually: a. clean as you cook, b. do all the dishes once you've finished cooking, c. leave the kitchen a shambles for your spouse/roommate/kids to clean.
I start off with (a), cleaning as I cook; as things get underway and I'm juggling two pans, one pot, and something in the oven, it comes a bit more to (b).

spinthebottleny March 4, 2010
Congrats to the winners! Gabriela, who's your canine kitchen assistant?

gabrielaskitchen March 10, 2010
Thanks! That's Bolillo my Cairn Terrier pup hoping I drop some of that dough!
(His name means something like "Dinner Roll" in Mexican Spanish, see here : http://www.ayudamutua.org/metaforas/images/bolillo.gif )

lastnightsdinner March 3, 2010
Congrats to the latest contest winners, the Wildcard winner, and the two runners-up! There's so much great food coming out of people's kitchens, and it's a delight to see.

MrsWheelbarrow March 3, 2010
Brava and thank you to the winners!

monkeymom March 3, 2010
Congrats! I love the reoccurring themes of great food being tied to togetherness and love.

gabrielaskitchen March 12, 2010
thanks! Love is what it's all about; great food is nothing without someone to share with!