Today: A winter pie that still manages to be bright and tangy. 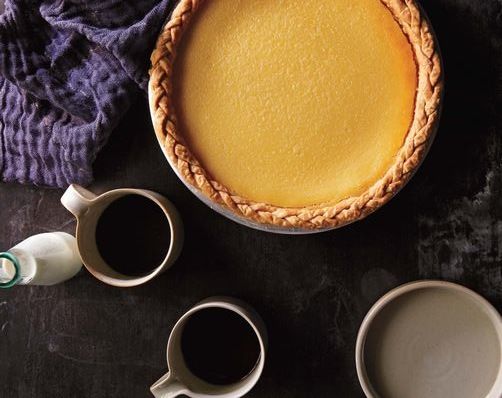 Lemon Chess has garnered a close following in our pie shop. It appears most often on the menu during the winter months, when fresh fruits are scarce on the East coast and we source from the West coast for its bounty of citrus. This tangy but rich custard is a longtime favorite of our pie shop customers.

To win a copy of The Four & Twenty Blackbirds Pie Book, tell us in the comments: What is your favorite winter pie? We'll pick winners at random at the end of the week! (Unfortunately, we can only ship domestically.)

goldengrain July 2, 2017
That Four and Twenty Lemon pie is HORRIBLE! It tastes like that filling between layers of coconut cake. In the cake it's good because the sweetness and tartness counter the subtlety of the cake. Imagine taking the entire can of that cake filling and dumping it in a pie crust. Imagine eating that filling by the spoonfull right from the can.

That's what this tastes like. Dumping a can of that layer cake filling. I had to throw it out. It was unfit for eating.

Elisa B. November 18, 2013
Huckleberry and cream cheese with a graham cracker crust

Paula R. November 18, 2013
Well, let's see. . . Anything Pear. No, wait. How about Kentucky Derby. No, wait.
Maybe an unusual cheesecake, but, then again, citrusy is luscious. Oh, boy. Pretty much all of them!

lynne November 18, 2013
O love anything lemon everyday of the year.

Chip_Head November 18, 2013
Pecan pie (from America's Test Kitchen Family Baking Book) made with and fool-proof double-crust pie dough (uses vodka in recipe for a flakier pie crust). Time intensive but worth every minute.

Lori M. November 17, 2013
Favorite winter pie would have to be chocolate...any kind of chocolate pie will do, but a dollop of fresh whipped cream on top is a must.