Why You Should Be Putting Miso in Your Roasted Vegetables

Today: Miso is so hot right now -- here's why you should love it anyway. 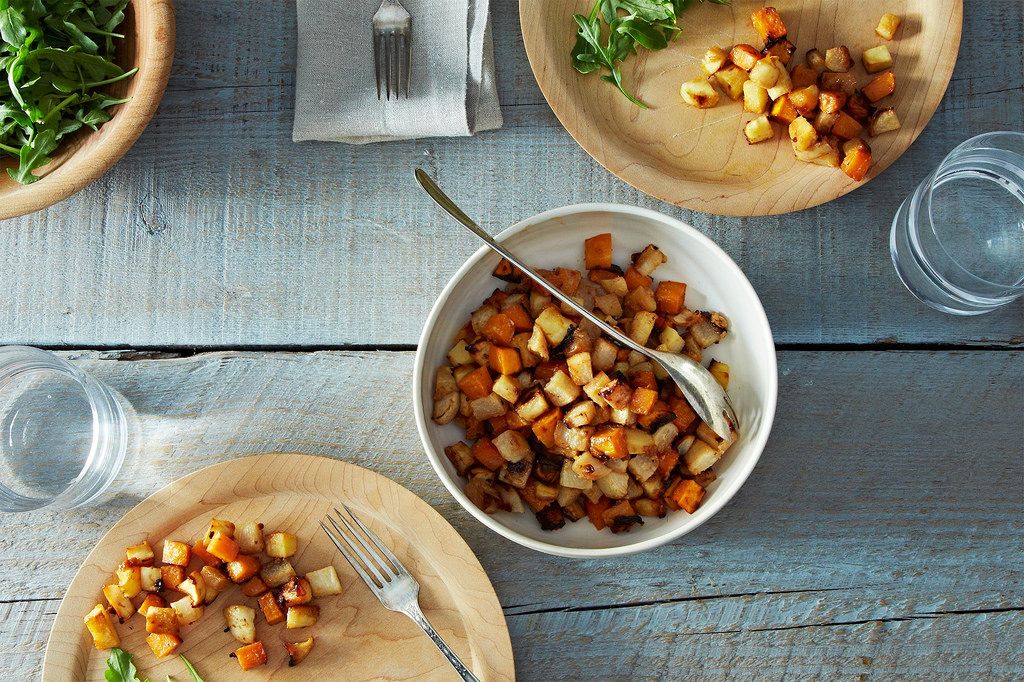 Miso should be the least faddish of ingredients. It is age-old. It is the product of a slow, semi-wild process, at least traditionally. It’s controlled rot, for goodness sake.

But it is faddish nonetheless: in the last year or so, it seems like every other recipe I see has miso somewhere in it. There are miso desserts, people.

More: Guilty! Have you tried our Miso Caramel yet?

All this miso is unambiguously good. You should eat miso! You should cook with miso! But a very small part of me looks at all this and thinks, I wanted to go to the Albanian coast first, darn it. 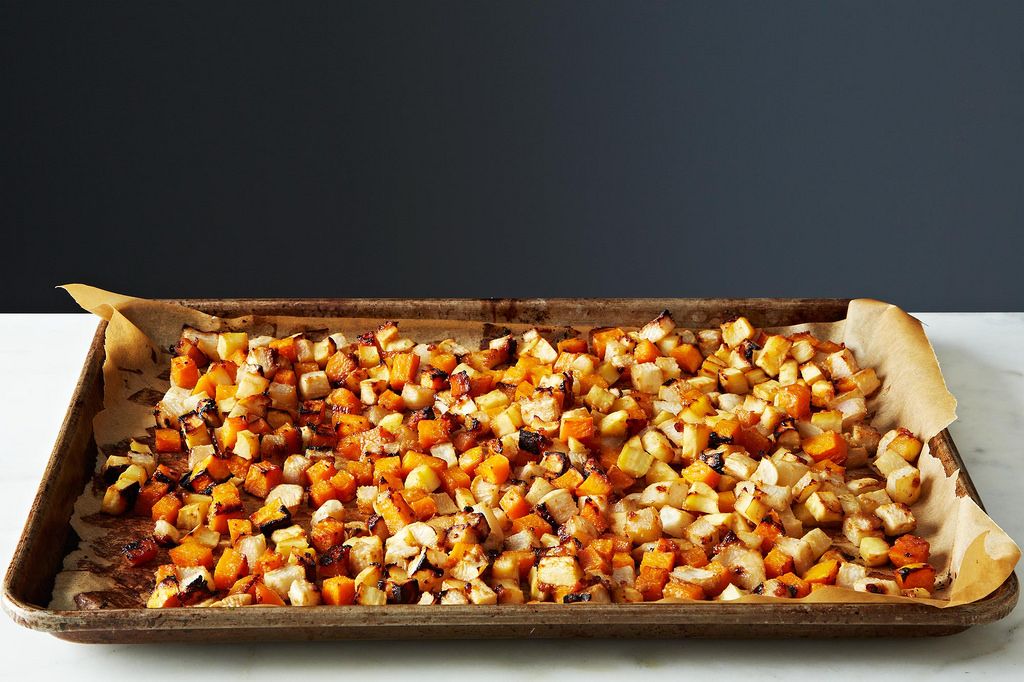 I’m thinking about this -- the question of who came first, you or the culture -- in part because to be a parent is to be hyper-attentive to uniqueness. To what makes your child your child.

This isn’t a toxic side effect of helicopter parenting. (He says, desperately.) It’s just a human response to watching someone come into being before your eyes. You notice what makes your child different from the children around him. And you nurture that difference. It’s what makes him him.

It’s ironic, though, because at the very same time you start noticing how little makes you you. Fine: me. I spent a lot of my teenage and twenty-something years marking the territory of my taste: the cadence of Joan Didion’s prose, the timbre of Marty Ehrlich’s clarinet, the funkiness of northern Thai food -- an overly curated, semi-precious aesthetic worldview. (Think High Fidelity, but even more obnoxious.) But then, sometime after small humans took up residence in my household, I glanced up and realized that I looked a lot like everyone else. 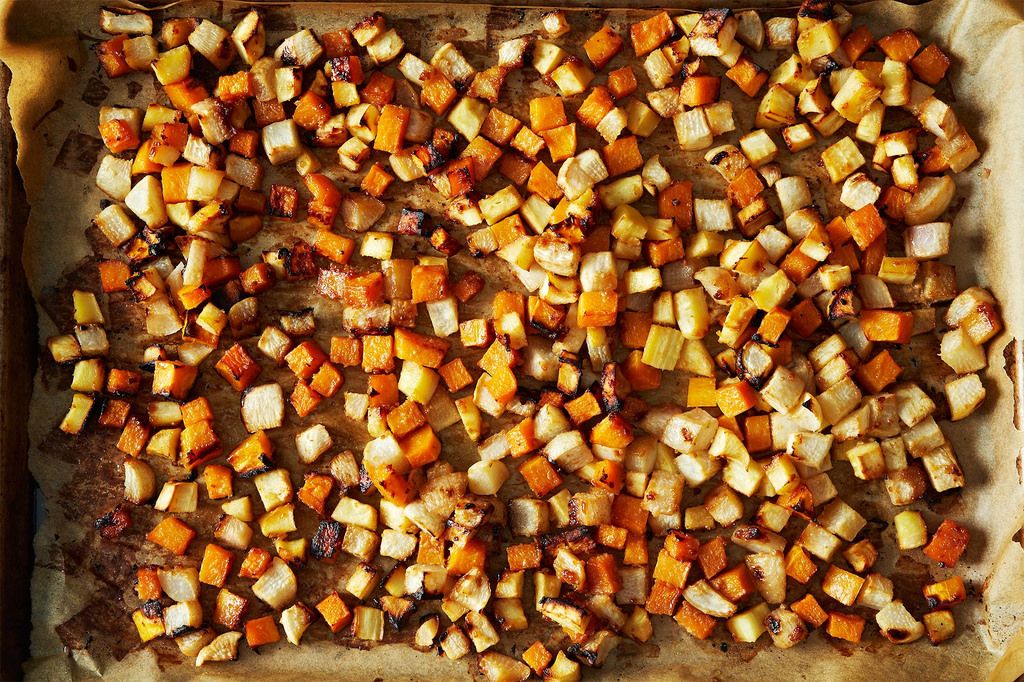 I want to say I cooked with miso before everyone else on the known internet did. But I know I am wrong. Like with so much else, I’ve been obliviously following along, so far behind I think I’m ahead.

It’s not hard to figure out why miso is everywhere. Cooking with it feels a little like using performance-enhancing drugs: you shouldn’t be achieving so much with so little effort. It’s a blast of umami, and although you can use miso very subtly, I haven’t here. These are root vegetables, tossed with a simple miso-maple dressing, then roasted at high heat. It’s the sort of recipe that makes you feel like Bobby Flay -- it is not afraid of flavor. Which is some compensation for having taken those millions of microorganisms -- the helpful offspring of all that controlled rot -- and blasted them into non-existence.

But that’s why you put miso in your dessert. 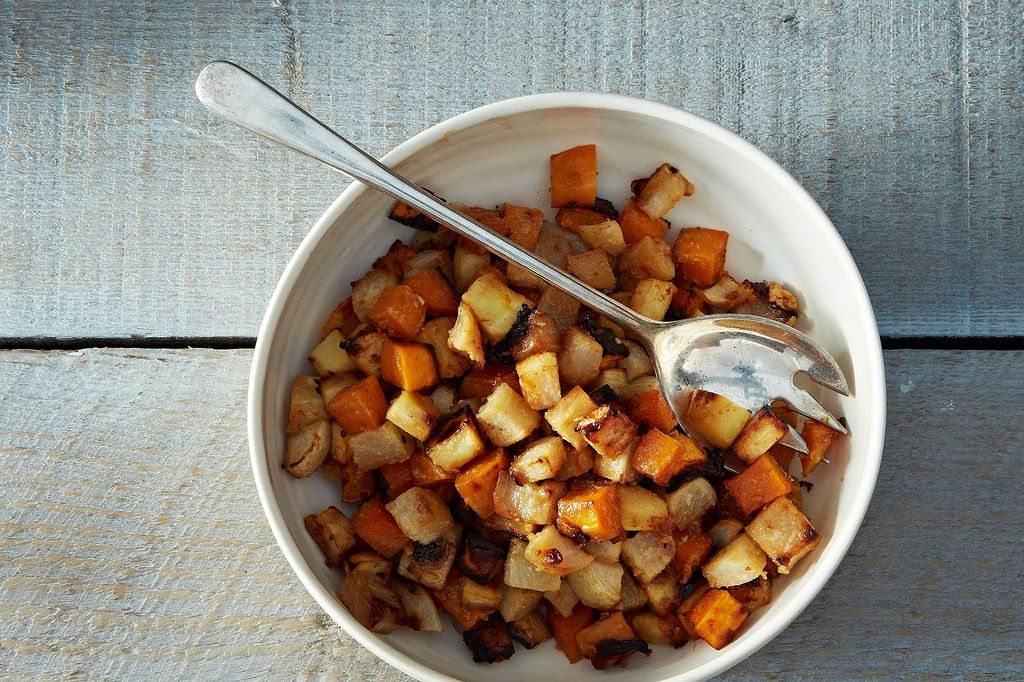 lonerngr88 April 11, 2015
I used coconut oil instead of the canola which is usually GM and highly processed.

kathy January 9, 2015
Lol, You guys are all so young. I'm 63 and have been using miso since way back. Miso has the same good flora that you find in yogurt due to the fermentation of the soy beans. There have been studies done showing it reverses the effects of radiation in the body. It would have been considered a crime back in the 60's to heat it above 118. Everyone knew that. Kinda like turning a good piece of meat into shoe leather in today's world. Keep researching what you're making. love your recipes.

Lucy September 26, 2014
Marty Ehrlich!!
He played at the "Roadhouse" late 70's, was incredibly gifted, and a rare person. As close friends, he helped to broaden my jazz collection (LPs!) with the likes of Jaki Byard, Eric Dolphy, and Sam Rivers. He gave heart and soul to the saxophone, and I remember him with amazement.

dj June 24, 2014
I only cook for myself so I need cut the recipe down. Also can you tell me the origin of your measurements. Is your Tabelspoon 3 or 4 teaspoons?
dj

Paul April 6, 2014
Not everyone loves Miso. Personally I dislike it.

missbellpepper March 2, 2014
I love you for mentioning John Darnielle. For a long time, I thought I was the only one too...

Oh, and the recipe looks delicious too!

Michelle D. February 16, 2014
Ellemmdee, heating miso above 118 degrees begins to destroy the beneficial bacteria and enzymes it contains (because it is a live, fermented food). So, when you add it to soup you should do so after the soup has cooked and cooled quite a bit. For this recipe, maybe just enjoy its flavor, or reserve some glaze to add after cooking.

pbf February 16, 2014
About the feelings of "who did this first?" -- it is nothing new -- Ecclesiastes noted the phenomenon over 2 thousand years ago -- There is nothing new under the sun! Take comfort from the fact that you are smack dab in the middle of the human experience and be happy for that! And also that miso is a great ingredient for all sort of cooking. Thanks for the recipe.

Natasha D. February 16, 2014
Wow what are the odds but I did this exact thing this week -- well, I made salmon and had left over miso-maple glaze and then tossed some veggies in to roast the next day. Very versatile!

Alexandra S. February 16, 2014
I don't know too much about cooking with miso, but I wouldn't worry too much about the high heat. I have made these vegetables, a miso-sake sea bass (the Nobu recipe), which calls for marinating the fish in a miso mixture and then broiling it. And I have made miso soup, which also gets pretty hot. But, maybe you're asking about something else — do you mean are nutrients destroyed? That I am not sure about, but I can say that miso itself can handle high heat. Hope that helps!
Author Comment

Nicholas D. February 16, 2014
See what Michelle says above -- but yes, you're doing this solely for flavor.

Alexandra S. February 15, 2014
Made these last night, and they were delicious. I used three big parsnips, two carrots, two red onions and one white onion. I used coconut oil in place of the grapeseed oil — I know coconut oil is one of those trendy ingredients that might seem unnecessary here but I love sweet potatoes roasted with coconut oil, and it actually offered a nice flavor — but otherwise, I followed the recipe to a T. The vegetables caramelize in the last 10 minutes beautifully — at 30 minutes they were slightly brown; at 40 minutes they were perfect. Glad I used parchment paper. Great recipe!

bookjunky February 14, 2014
I've noticed this trend for a while. It pisses me off, when everyone likes something I've ALWAYS liked. It makes me feel like one of the herd, pardon the expression, when I know damned well I was there first. Well anyway, I have goats and they are not all that much fun. Like last year I had to pull a dead kid, and now this winter they keep coughing and I don't know why. And I think we try pretty hard to keep them all healthy, but as the saying goes, where there are livestock there are dead stock. So you can take consolation in thinking about that and just enjoy your miso. It looks brilliant and I wish I had some of those roasted vegetables right now.
Author Comment

Rkaiii February 16, 2014
Relax. No need to get pissed.
Somebody needs to be first and you're it.
To bad they don't give medals for this, just time to move on.

AntoniaJames February 13, 2014
How did you get those vegetables to caramelize? There seem to be so many, so close together! Maybe what we get out here in Northern California is a lot juicier than what you can buy, but if I bunched that many bits on a single sheet pan, there'd be clouds of steam in my oven while the vegetables would be turning to mush, long before getting any dark brown bits like those shown in the photo. What's your secret? Do tell! Thank you. ;o)
Author Comment

Kidding! Food52 HQ takes the photos, so I defer all photo questions to them. But I bet they're using convection.

Rkaiii February 16, 2014
I got a new oven that holds the steam in. My old one didn't. I found that cracking the door helps.

Rémy R. February 13, 2014
The recipe title makes me think of Rusted Root, and that crazy giddy song they had that one time, and so I'm doubly happy reading this.
Author Comment