Moving In Together: How to Merge Your Styles

When a couple moves in together, how do they choose between two sets of everything? Jason & Tyler let us in on their plans to combine collections—and then invited us come back to see the results. Check back tomorrow to see their new place! 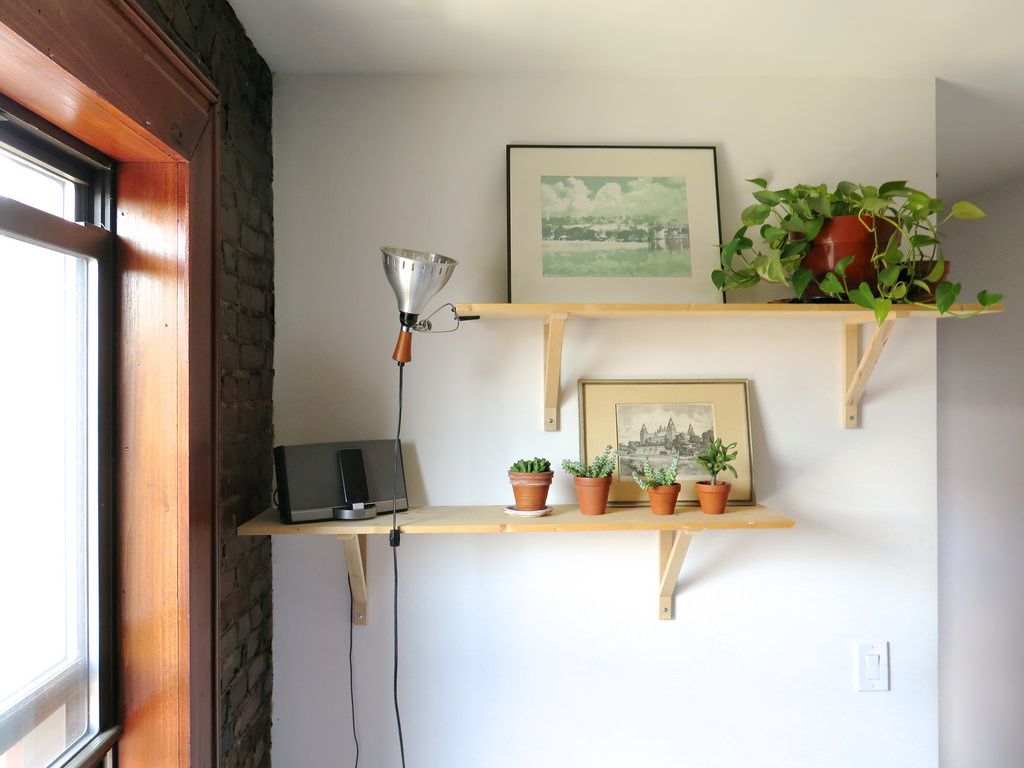 Sturdy, simple shelves are worth taking with you—unless taking them down means you might never get them back on a wall again.


With the recent launch of our registry, we've been doing a lot of thinking about stocking a first apartment and all the decisions that come along with that. When a couple moves in together, two collections have to become one. Whose couch do you get rid of? What do you leave on the curb? What big pieces do you plan to invest in? And how in the world do you merge your styles?

Last month, my friends Jason and Tyler moved in together after a few years of dating. Before, they lived in neighboring apartments, and since Tyler's lease ended first he spent a few months recently camped out in Jason's room while they looked for a new place. We poked around that apartment, got the run-down on how they expected to make everything fit, and checked back in once they got settled in the new apartment—and you should tune in tomorrow to see their new space, because DANG. It's pretty.

Here's their strategy for moving in, plus 6 tips that will make your life easier if you're doing the same. 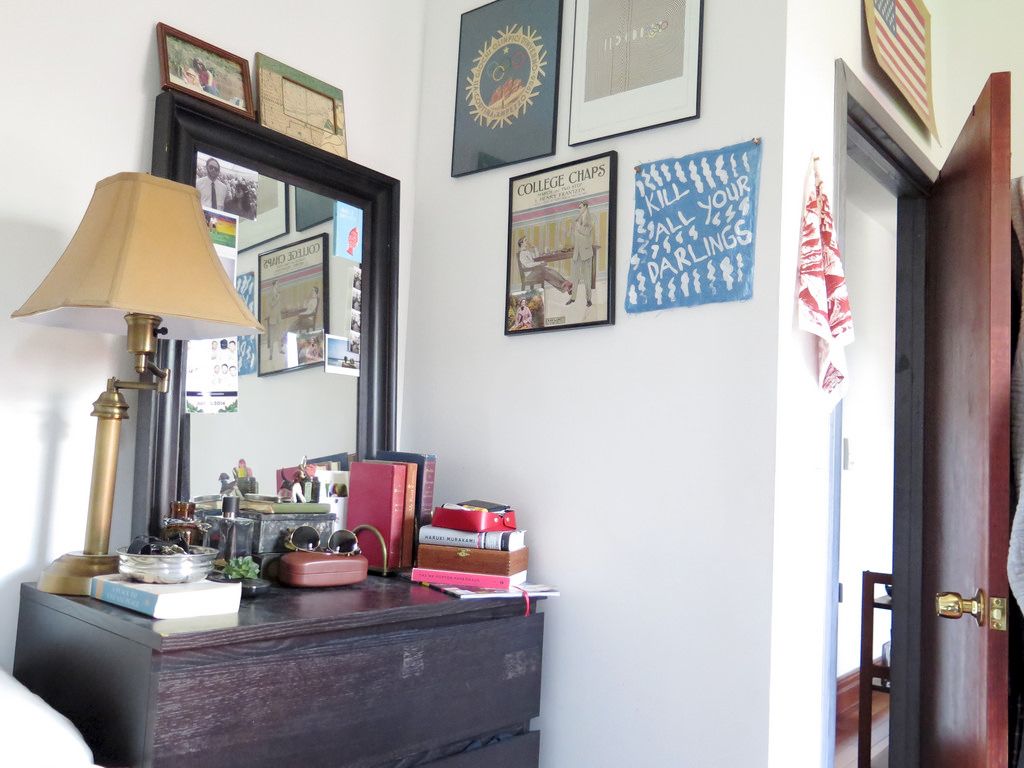 Art is something Jason and Tyler plan to accumulate naturally over time; Jason's old apartment was decorated with framed prints and his own designs.

1. Get real about merging your styles.

Tyler, who describes his taste as "clean, simple, minimalist," did not express any major concerns about coping with Jason's slightly more, shall we say, "artistic" way of living. (Full disclosure: Jason used to be my roommate, so I know.) "I love little objets," is the way Jason describes it to me, "like old bottles of all colors—my dad collects them—and curiosity pieces. If it were all up to me, every flat surface would be covered in small pretty things." How do they plan to deal? "We're going to need some shelves." 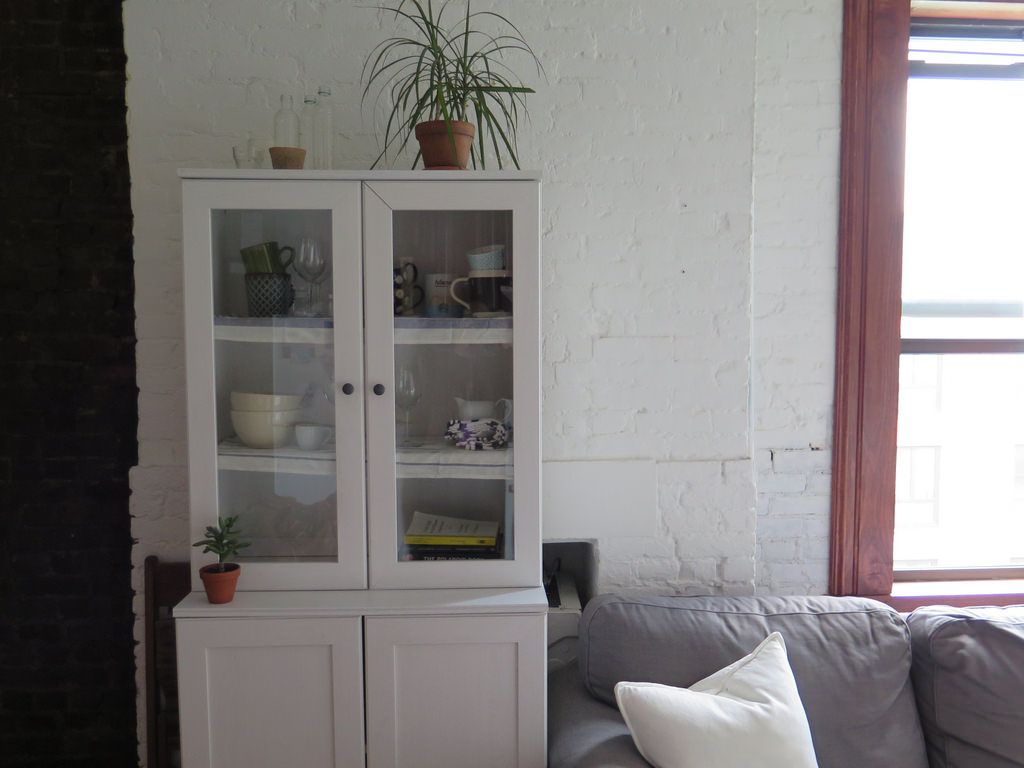 Even small spaces have room for decor with personality, though some pieces need to be simple to eliminate clutter.

2. Say goodbye to anything that's more trouble to move than it's worth.

When you're combining collections, it's important to purge. "We have some super-cheap IKEA shelves that I actually like, but if the new tenants will just buy them from us that would be a lot easier than taking them down," Jason says, eyeing them a little wistfully, "We'll also probably ditch this little white hutch, which is great, but it would be a pain to move." One look at its slanted shelves (which are buckling more like cardboard and less like antique cedar) and I tell him it is the right call.

What about getting rid of some of those objets? "Nice try—I've already packed them up." 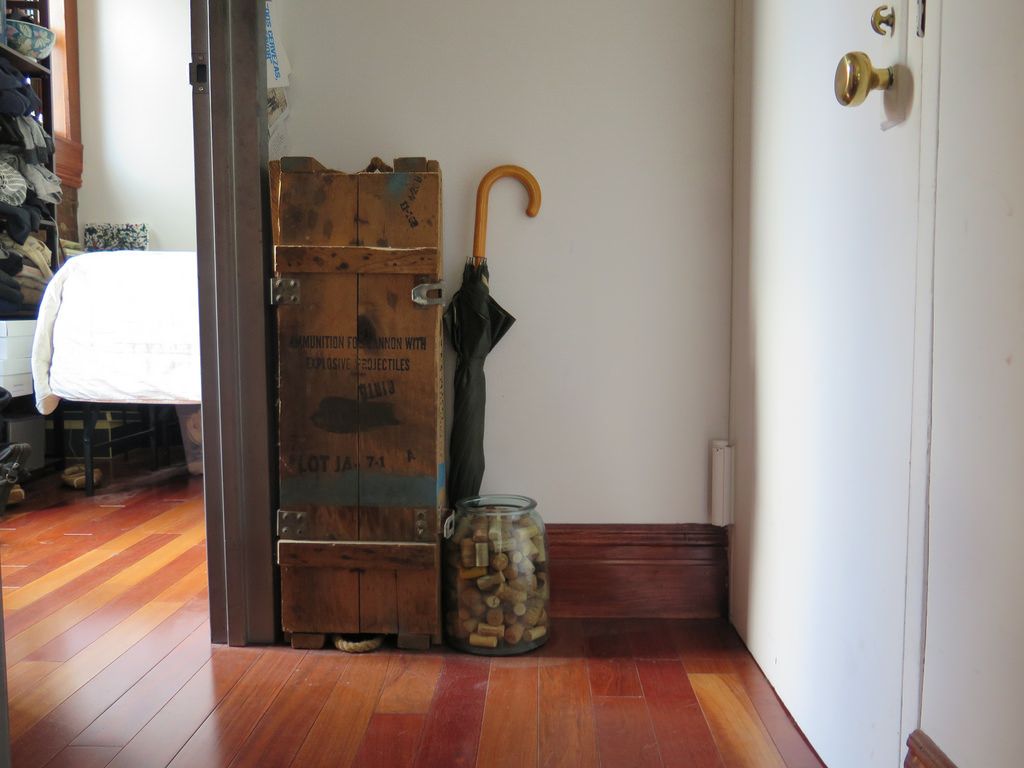 3. Keep only what's essential—and what you love so much it hurts.

It's very probable that you'll drag certain pieces around your whole life, for no sensible reason other than that you can't bear to part with them. That's okay, if you do so selectively. Jason lists what will make it into the moving truck: "We have a mattress we love, Tyler's bedding, and a simple, functional bed frame, though I admit that we're looking at Room & Board's wool throws to use as a comforter..." Jason is the kind of person who gravitates to the most expensive item in the store.

"And Jason's beloved Eames chair," Tyler adds with an eye roll I can detect even over email, "I also have this lamp that doubles as a table, which I found at a vintage store in D.C. right after college: It has a round marble surface like a tabletop, and the rest is brass and wood. It's definitely the coolest thing I'll be contributing, so I'm excited to figure out where that'll go in the new place."

A mattress, a chair, and a side table/lamp is all they're really taking—"and maybe a bookshelf?"—we're dealing with true New York City minimalists, and it's good advice. 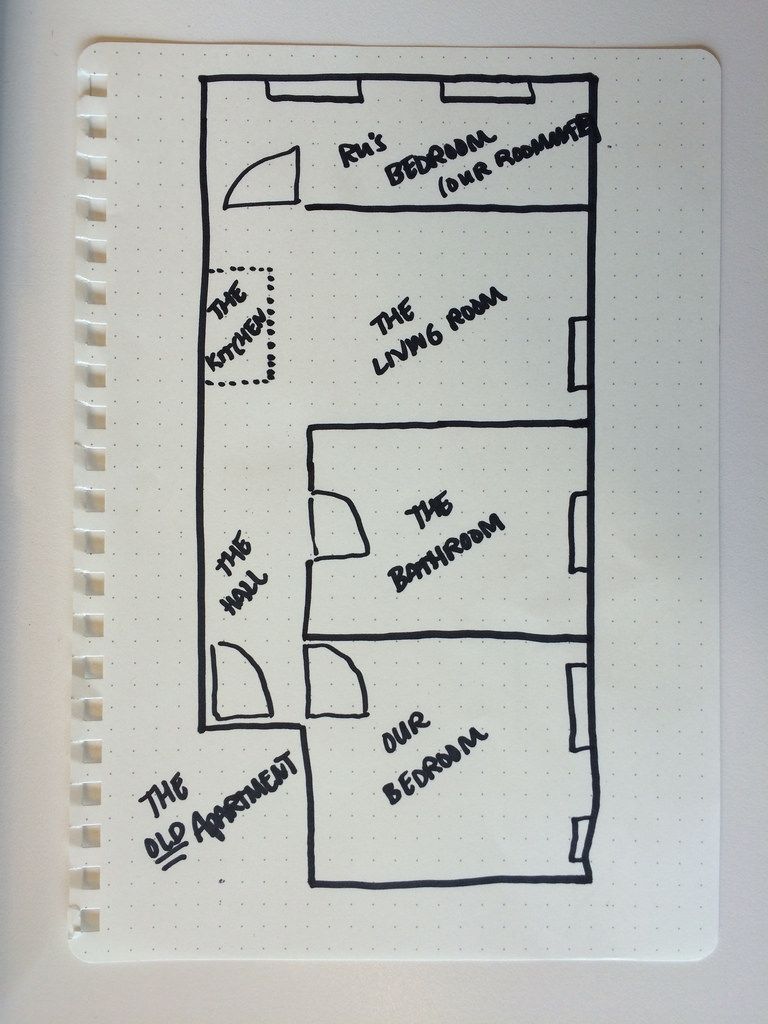 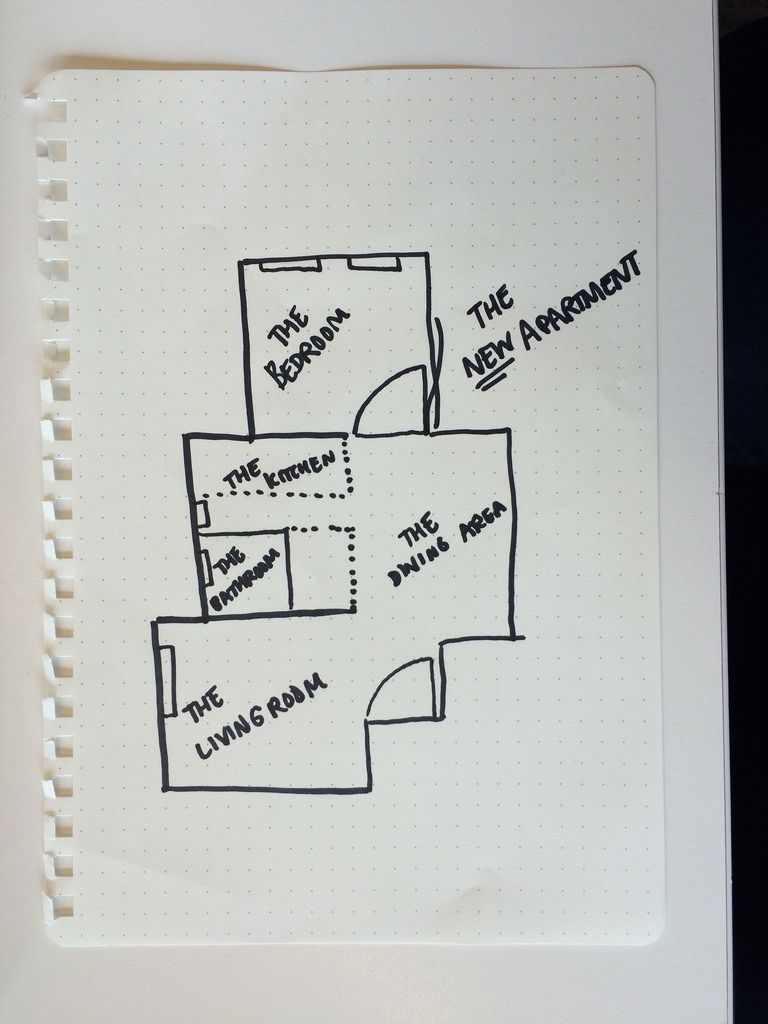 Left: Tyler and Jason's old place was shared with a third roommate (hi Ru!); right: The new space is roughly the same size, but a better arrangement for two.

4. Sketch floor plans of the new place—and get excited.

"We're making the smaller bedroom of two into a living room/den situation," Tyler tells me, "It will be interesting (and fun!) to have separate areas for dining, kitchen, and living rooms—as we've both had small apartments where those three rooms were actually just one."

Jason, no surprise, is more focused on the ambiance: "Windows. In. Every. Room. When I first moved to the city, I had this narrow little prison window that looked into the shaftway and felt like it only let in winter light year-round." I remember this room—it was so dark you couldn't see without the lights on, even at noon. "The new place has windows looking out into the courtyard from pretty much every vantage point in the apartment—even the bathroom," he goes on, a very happy camper. 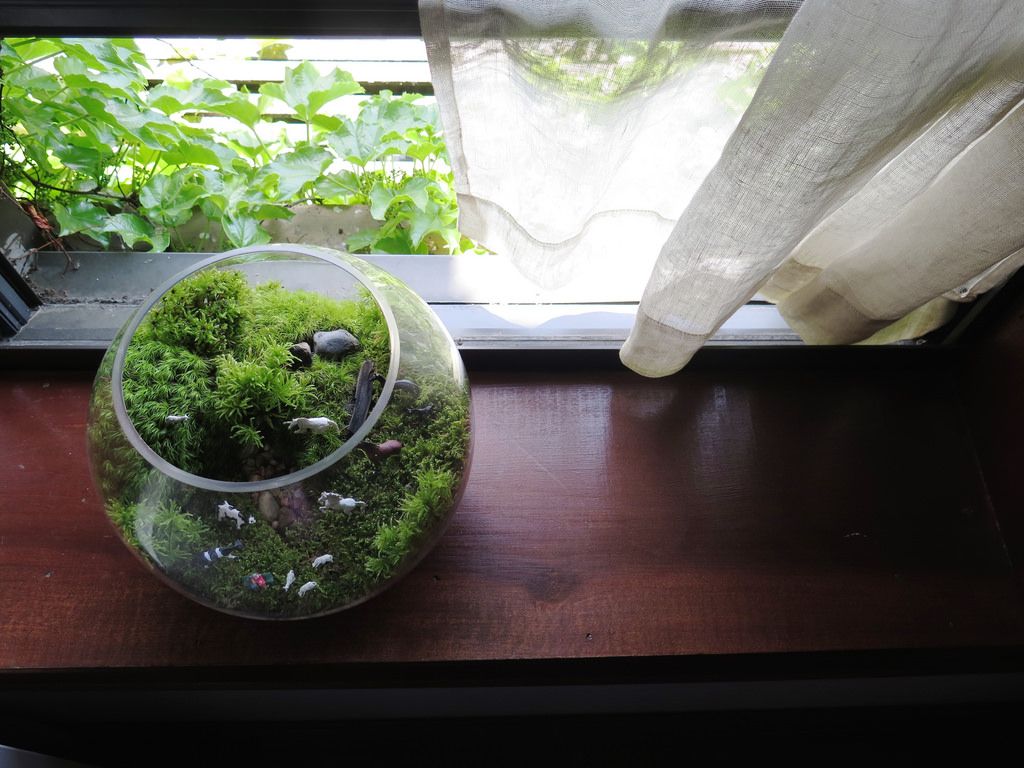 Jason's old building did have its perks, like a fire escape strewn with ivy so thick it would nearly creep in the windows.

5. Strategize for problems you already expect.

"Our main consideration is extra storage space, since the new apartment only has one closet," Tyler tells me, "We're both getting rid of our dressers and buying a real wardrobe, probably something from West Elm or CB2." Clearly the practical one in the relationship, he has already considered some options: I'd love for it to be mirror-plated if possible, to create the illusion of space even if it takes up room." Getting rid of a perfectly good piece, like two working dressers, can actually be an important step to making way for a better suited solution. 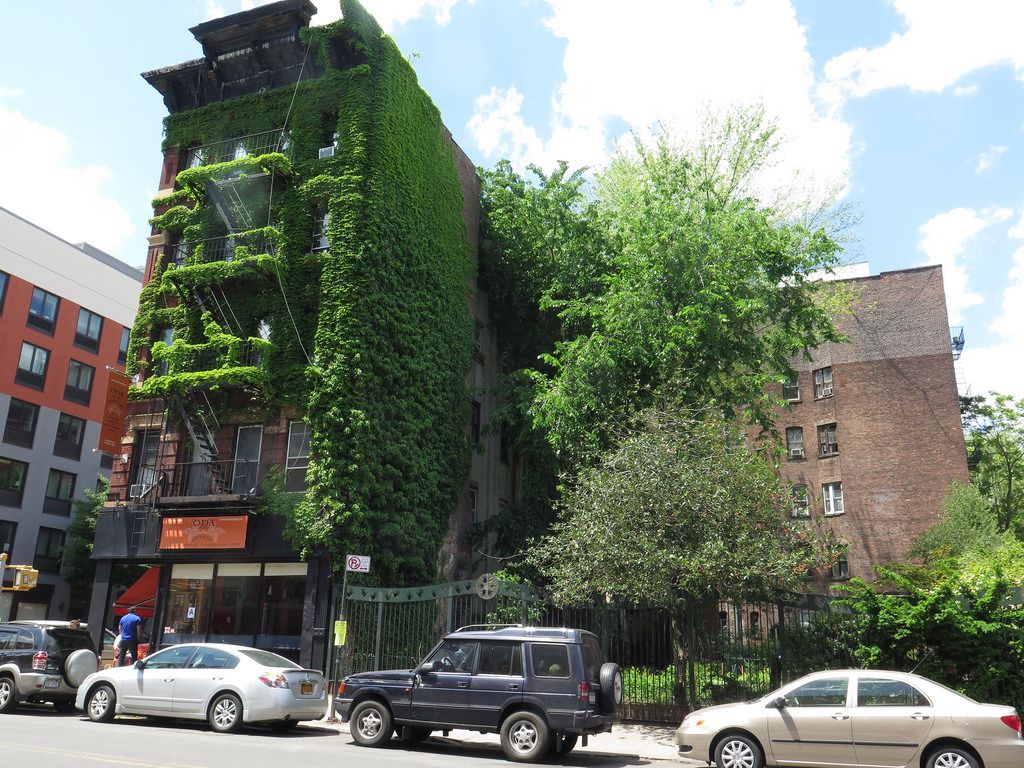 6. Save up for the new pieces you'll need—but wait to buy them until you're in.

Tyler itemizes their planned purchases for me: "We need to get the aforementioned wardrobe right off the bat so we aren't living out of boxes for any period of time, and we'll probably splurge on a new couch, since we don't want to buy that used. I had a really uncomfortable little two-seater in my old place, so it'll be nice to have a change of seatery." (Very punny, Tyler!) Jason pipes up, "IKEA couches are already $700, so it's not significantly more expensive to buy something that's better quality."

But not all of their purchases will need to be new or immediate, as they tell me about plans for finding a vintage dining table and a unique coffee table that they're in no rush to run out and buy. "I think we both want something that's a bit unique, so we'll probably do some hunting to find the right pieces," Tyler says, explaining that living without a coffee table for a spell won't be a big deal. As for the art, decor, and details? "I want those to be curated over time, and ongoing." 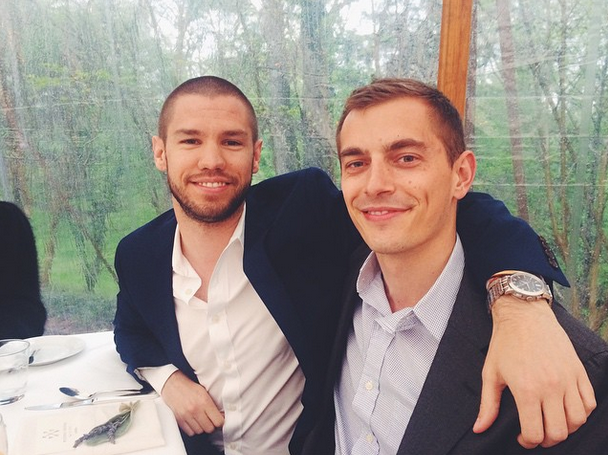 Curious how it all turns out? Check back tomorrow to see the pictures of their new place!

ThomasJ July 28, 2015
Anyone know where the clamp on lamp in the top picture is from? Really like that little lamp!