The 17 Best Restaurants in Portland, Maine & Beyond

When it comes to coastal Maine, lobster rolls aren't even the half of it. 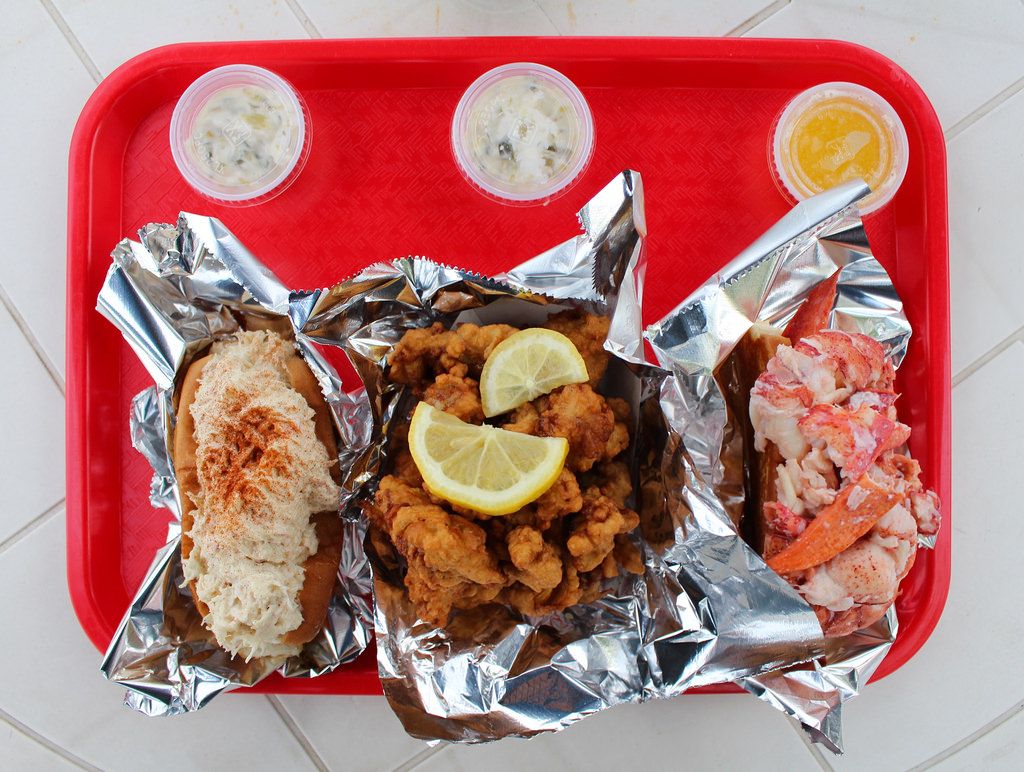 After six hours of driving through Maine, I had consumed three donuts, my fair share of lobster rolls, a blur of requisite car snacks, uncountable ice cream cones, and a pint of deep-fried clams. It was not the time to be eating light—my boyfriend and I had strategized our weekend trip to Maine with a carefully mapped selection of local favorites, return-worthy lobster rolls, and breathtaking views from our road trip the year before. We snacked, shopped, and chatted our way up to our destination: a forest-covered Bed and Breakfast in Bucksport, a small town near Acadia National Park in northeast Maine. Here are the places that made us pull over on the way up—and detour on the road back down—coastal Maine: 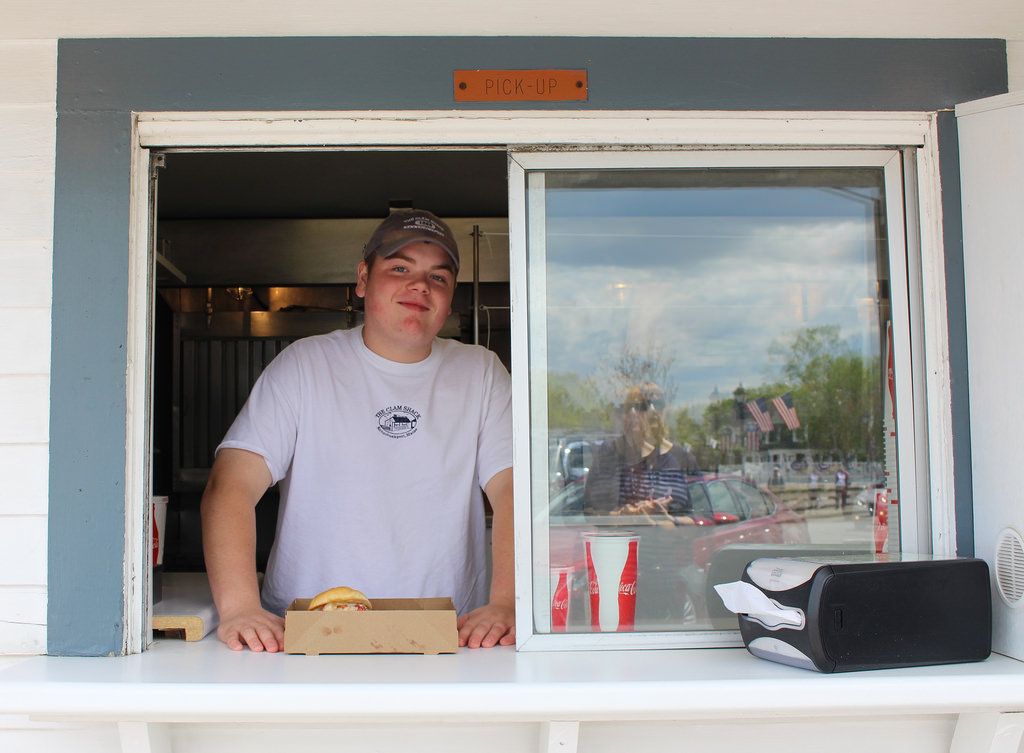 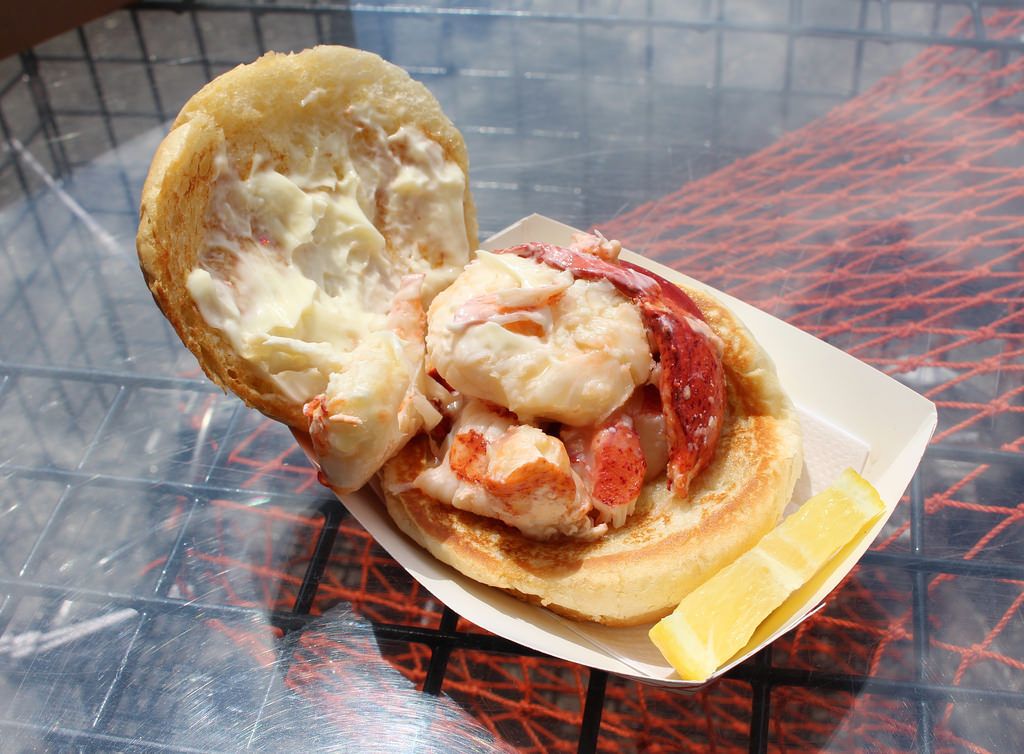 Left: The pick-up window at The Clam Shack in Kennebunk; right: Their lobster roll 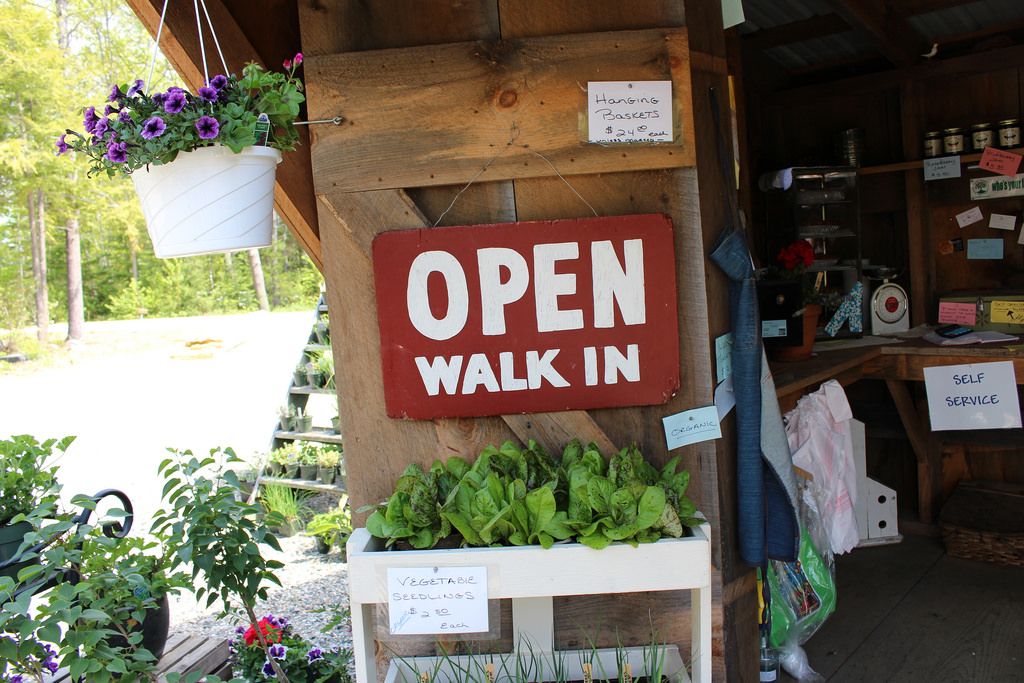 A self service farm stand just outside of Kennebunkport 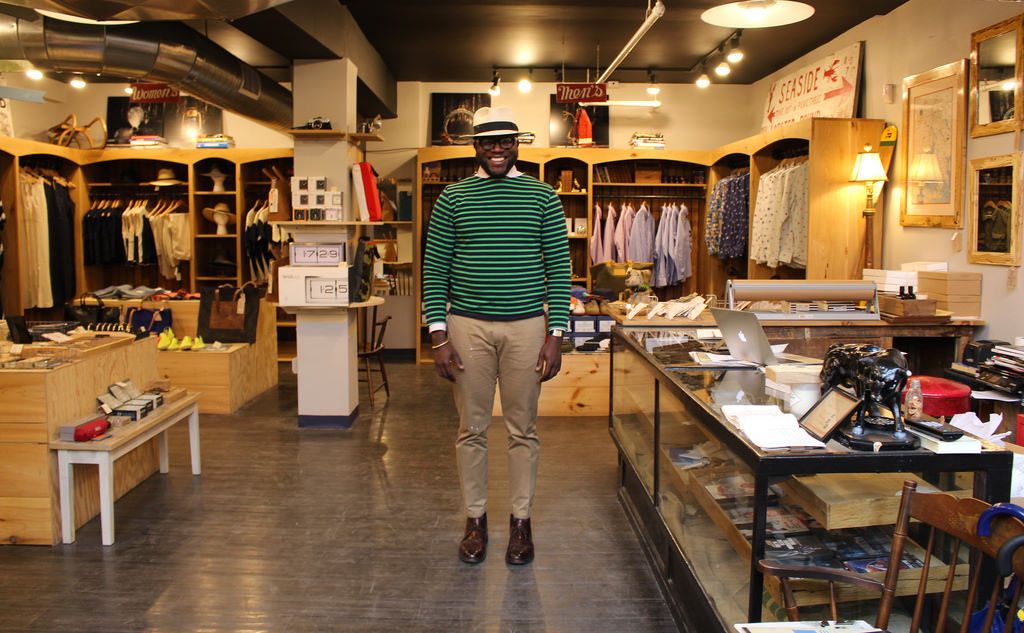 The owner of Portland Trading Co. in Portland, Maine shows off his beautiful store.

Drive north for about 35 minutes, then check out Portland: 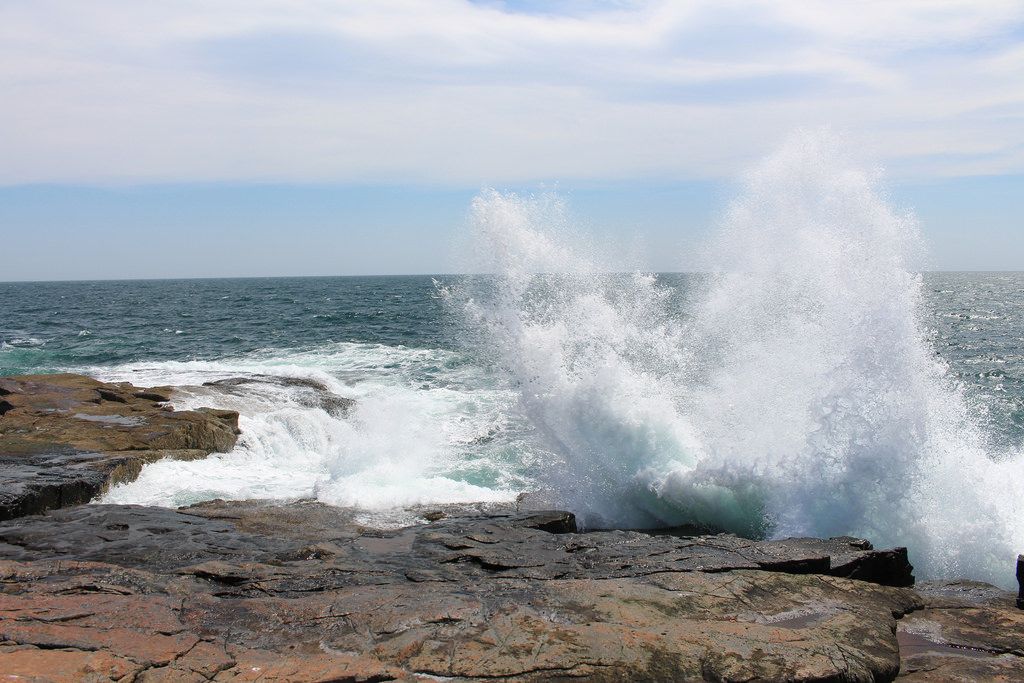 Left: The pick-up window at Red's Eats in Wiscasset; right: The breakers at Acadia National Park

Pit stops for the final stretch: 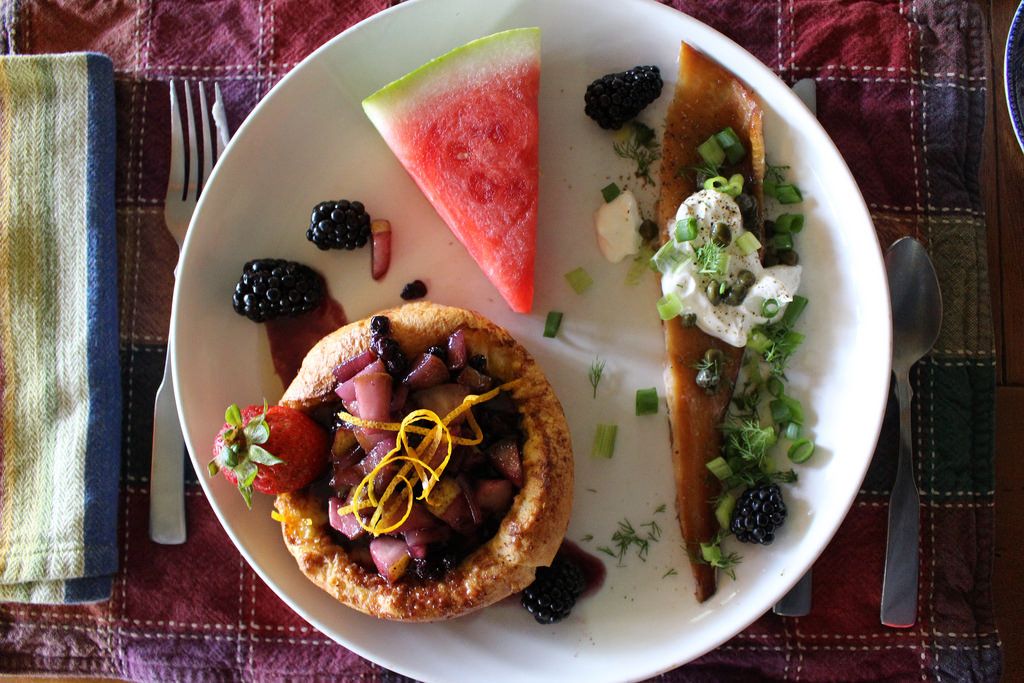 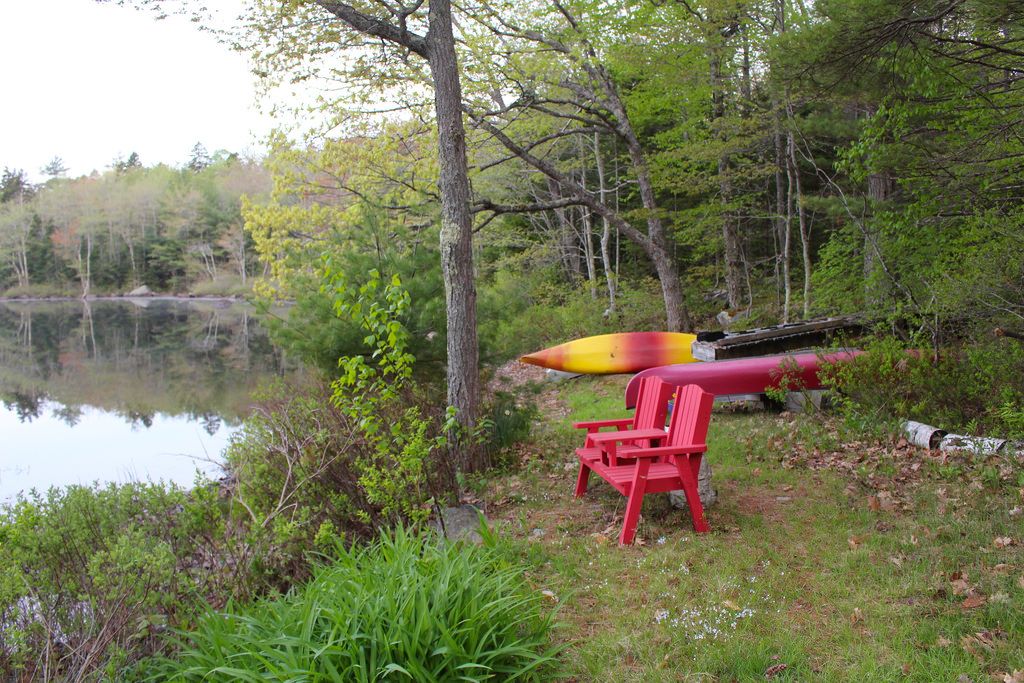 Left: A "light" breakfast at William's Pond Lodge; right: A quiet place to read (or canoe) at the lodge.

Once you get to where you're going:

There are a ton of beautiful bed and breakfasts all along coastal Maine, but I stand by my favorite, a "Bed, Breakfast, and Dessert" called William's Pond Lodge. The two-building lodge has three bedrooms and, though off the beaten path, is well worth the trip. Its proprietor, an unbelievably kind man named David, serves unforgettable breakfasts (garlic-seared scallops and eggs; German pancakes with local trout on the side) and desserts (this is where the fresh produce from the Five Acre Farm Stand comes in handy). And, if you ask nicely, he'll give you a tour of the most beautiful, often-missed parts of Acadia National Park—for the price of lobster roll, of course.

See all of our picks on the map below. Where do you love to go in Maine? Leave your suggestions for us in the comments!

This piece was originally published in June 2015, but we loved it so much that we're bringing it back this summer. Pack your bags and lobster up!

Bevi July 8, 2019
I would include Little Giant in Portland for dinner, and the Thistle Inn in Boothbay Harbor for dinner as well.

paseo July 6, 2019
Nina June in Rockport is not to be missed. The chef (Sara Jenkins) is the daughter of a great food writer Nancy Harmon Jenkins and a marvelous cook (she can write as well). Fabulous Mediterranean food with local ingredients.

Sonya C. June 10, 2019
Willard Scoops in South Portland cannot be missed. Get the salt caramel ice cream. Better yet, walk across the street to Scratch Bakery first for two chocolate chip cookies (theirs are SO good!) and make an ice cream sandwich. For an amazing farm-to-table meal, visit The Well at Jordan's Farm in Cape Elizabeth. A fun tip for getting into Eventide without waiting in line is to go for late night happy hour, which starts at 9 pm. OR, you can get there an hour before they open. Seriously. It's worth it, especially the tuna crudo. Mr. Tuna makes amazing hand rolls and was parked in front of The Shop (good for oysters) last summer.

Heading to Maine next month for our wedding! We're from Texas and live for our Maine getaway every summer.

Sammi J. June 8, 2019
Oh my! We just took that trip driving from Boston up to Bar Harbor and many of the mentioned restaurants/food spots on this list were places we tried. Glad to see that so many of the places recommended to us were on this list as they were incredible. McLoon's Lobstah Shack was amazing and worth the drive there. Duckfat, Central Provisions, Holy Donut, Primo were all so good. Lots of great brewery's too! Coming from the West Coast, we had an amazing time on the East Coast!!

Ada’s Kitchen in Rockland has the best pasta in New England, maybe even north of NY. Handmade pastas, and Italian specialties. Great bar and lounge.

Stockton Springs:
The Hichborn: a hidden gem. Some of the freshest food in Maine, beautifully crafted and don’t forget the coconut cream pie for dessert (seriously)

brunobunny May 29, 2019
Francine's closed. There is a new restaurant named Franny's Bistro. The menu looks great.

Ryan M. May 28, 2019
Next time you're in Maine, visit Cabbage Island Clambakes. We are a family owned and operated restaurant with four generations working together including my 13 year old cousin and 98 year old grandmother.

The trip includes a harbor tour and a traditional Downeast clambake with fish chowder, two lobsters, a pound of steamers, corn on the cob, baked potato, onion egg and a massive slice of blueberry cake.

Winifred R. May 28, 2019
Only eating clams fried? While those are good you have to have steamed clams once in awhile. Personally I prefer them to fried, and when I can get them clams casino. And try lobster pie if you can get it up in Maine (or New Hampshire, where I'm originally from) - lobster pieces covered with buttered cracker crumbs. Doesn't sound like much, but it's so decadent it's hard to finish a portion; wish I could remember the place in southern Maine I had it last time I was up there. Now I live on the Chesapeake Bay and people here have their own specialties like sugar/blow toads and softshell crab. There's good stuff lots of places, don't get stuck in a rut (although I'm still not big on raw oysters even though I have a Ph.D. in fisheries and know people who grow them).

Carole July 27, 2017
Nice list, but really is missing an essential Portland spot -- Eventide. Next door to Hugo's and owned by the same folks, but in my mind the only place I must visit on every trip for their wide variety of oysters, the best lobster roll ever (non-traditional -- just brown butter and lobster on a steamed Bao) To. Die, For.

Nicole June 26, 2017
Food52: I would LOVE a guide like this for more drives and regions! I make a lot of road trips and this one of these for the east coast or west coast, or cross country would be amazing!

Laurie T. July 10, 2016
Frosty's donuts in Freeport.... If you don't want to wait in line at Red's Eats in Wiscasset, go across the street to Sprague's for a lobster roll or dinner.

paseo July 6, 2019
As a resident of the Midcoast, never stop at Red's (not worth the wait or the hype). You are right, Sprague's is better.

Andrea B. July 10, 2016
Little Bigs in South Portland makes the best donuts I've ever had! Try the maple bacon crueller for sure. Plus, they sell savory hand pies that we always grab for a long drive.

Tucker &. July 10, 2016
Moose island Bakery and Quddy Bay Lobster in Eastport. If you're near Jonesport and are doing some cooking you can get your lobsters right off the boats and the freshest mussels at Moosebec Mussels at an incredible price. Truly Downeast gems.

Shari B. July 10, 2016
Some great suggestions, but Red's really doesn't belong with these other restaurants. People wait on long lines for very average food there. Skip it and come to Harraseeket Lobster in Freeport Harbor or also in Freeport Azure Cafe or the Broad Arrow Tavern, or stop at one of the great Brunswick restaurants, like Tao Yuan (Top notch--James Beard award winning chef), Little Tokyo, to name a few.

Marguerite T. July 10, 2016
Things can change in a year for eateries. I wouldn't base a trip on recommendations in an article from a year ago. A recent update would be convincing.

Ginny June 10, 2016
Three Tides part of the Marshall Wharf Brewing Co. in Belfast is where we go to indulge ourselves with Pemaquid Point Oysters (a dozen each, please!) while watching Belfast Harbor activities. Morse's Sauerkraut & Euro Deli in (outside of) North Waldoboro is incredible if you feel the urge to take a short break from Maine seafood!

melissav May 20, 2016
I know this is an old post but I'm planning a getaway with my husband in late June and I'm a little overwhelmed figuring out where to go and stay. We'd like to spend a couple nights in Portland and then head north but cannot figure where to stay for the rest of the trip. Any favorite destinations / lodging recommendations?

april June 10, 2016
Stay in Camden; is a beautiful ways up from Portland but so much good food! And definitely have a dinner at Tao Yuan in Brunswick. I can't believe that resto didn't make it on this list!

Heidi H. September 1, 2015
A must not miss: The A-1 Diner in Gardner, Maine (just South of Augusta)
also Aragosta in Stonington and Lily’s in Deer Isle when they are open.