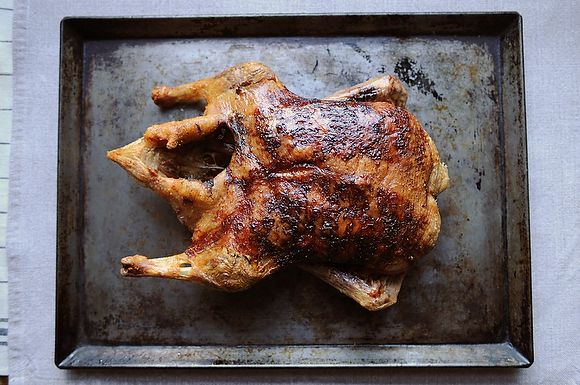 This Christmas, my family and I went to Washington, DC to visit my sister, Abs, her husband and their two children -- the second of whom was not yet a month old. We decided to do Christmas dinner potluck-style, with my mother and me bringing the veggies, and my sister handling the main event and dessert. She bought a ham and two ducks, which my mother then proceeded to show us how to crisp perfectly on Christmas afternoon.

I had never slow roasted a duck before, and I'll admit I was a little worried about the meat drying out. But my mother insisted that her method -- taught to her by her own mother years ago -- was foolproof. We watched as she pierced the fat of the duck with a carving fork at least thirty times, both front and back, salted the bird all over, and put it in the oven at 250 degrees. As the hours went by, she would periodically remove the duck, pierce it all over again, and then return it to the oven. Once it started to look browned and slightly crisp, she carved it into pieces, turned up the heat a little and stuck the pieces back in the oven on a cookie sheet. They emerged mahogany and almost impossibly crisp and crackling.

(Note: I'll be away on my honeymoon until next week, so don't be surprised if you don't see me in the comments section!)

1. Heat the oven to 250 degrees F. Remove the giblets from the cavity of the duck and rinse the bird inside and out with cold water. Dry the duck thoroughly with paper towels, including inside the cavity. Salt the cavity well.

2. Using a sharp carving fork, pierce the skin of the duck, working at an angle so you don’t cut into the meat, all over. (You want to pierce it at least thirty or forty times, all over the entire bird.) Salt the skin liberally, and place the duck, breast side down, in a roasting pan. Tuck the wings behind the neck and put it in the oven.

3. Cook the duck, removing it every half hour or so and re-piercing the skin so that the fat can escape. After 2 hours, flip the duck onto its back, piercing the fat over the breast well. After about 3 hours, the duck should start to look crisp and lightly browned. At this point, turn the heat up 350 degrees F and continue to cook for another 30 minutes or so, until dark brown and very crisp. (Alternatively, you can cut the duck into pieces, arrange the pieces on a rimmed baking sheet and return them to the oven to crisp that way.) Let the duck cool for 5 to 10 minutes before carving and serving.

Aina December 26, 2017
First duck ever made and it turned out fantastic! As well said foolproof method and very easy. Thanks!

marmar September 9, 2014
Do you think it's possible to do this in two parts? As in, half the cooking the in the morning, stick it in the fridge, and then finish it that night?

mainesoul January 27, 2014
Made it this weekend exactly as described except that used a vertical cooker so all sides were exposed. It was fantastic and easy.

annemax January 27, 2014
Great idea! I was thinking last night that I'd like to do a duck again soon, now you've given me the inpetus!

annemax January 30, 2011
I've done a version of this for years, it's the easiest way to make a duck. I use a v shaped rack and prick the duck all over with a fork and flip it every hour. Works every time!

lizellicottcity January 30, 2011
I made this duck just last night and it was fantastic. The sauce I used was the kumquat sauce in Dorie Greenspan's new cookbook, 'Around My French Table.' In addition to kumquats the sauce has red wine and chicken stock and is really delicious. I served it with truffled Yukon gold mashed potatoes (D'Artagnan's truffle butter), roast carrots and parsnips, and a homemade Lahey-style bread with caramelized onion. My guests were most appreciative.

Merrill S. February 1, 2011
So glad you liked it. Sounds like you adorned it perfectly.

Waverly January 27, 2011
Looks wonderful! I made the slow roast duck from Amanda's New York Times Cookbook a few weeks ago. It was very easy - so easy that I would love to try this recipe as well.

Greenstuff January 27, 2011
I'm a huge fan of slow-cooked duck, and Merrill's post plus kristen miglore's notes convinced me to make one for a small dinner party tonight. Besides some simple sides, potatoes roasted in duck fat and some French green beans, I was reminded of a Sarah Leah Chase "sauce" that I used to make with roasted duck. It was delicious and didn't get in the way of any crispy skin, as it's easy to serve on the side of the finished duck. It's fennel braised in wine and concentrated duck broth, green and black olives, dried apricots, a little honey (I don't much go for sweet), and rosemary.

Midge January 26, 2011
I had a duck disaster about 10 years ago and haven't cooked one since, but this approach is tempting me. Thanks Merrill (and Merrill's mom). Hope you're having a great honeymoon somewhere warm and sunny with amazing food.

Merrill S. February 1, 2011
Thanks, Midge! There was indeed lots of sun and lots of great food. More to come on that...

betsykp January 26, 2011
One holiday a few years ago, one of our house guests was a professional chef from London--yeah! He also used the slow roasted duck technique. When the duck fat was still rendered clear (hadn't browned) he collected and reserved the fat, and went on to make the most amazing pie crust for a pecan pie. I still remember that pie.

thirschfeld January 25, 2011
That is the squarest duck I have ever seen. You sure that is not a cross dressing chicken in that photo?

cynthia_stross_johnson January 25, 2011
Do you take the whole bird out every 30 minutes and again pierce it 30-40 times all over the body? Or just reach in the oven and give it some piercings where is sits? Sounds really good (and like I could do it!)

Kristen M. January 25, 2011
Merrill's away on her honeymoon, sans internet, so we're weighing in for her. You only need to pierce 30-40 times to start, then pull the duck out (it's safer than reaching in, plus you lose less oven heat that way) and pierce a few more times every half hour.

Jocelyn G. January 25, 2011
Love how easy this is! Can you recommend a compote and side dishes to complement the salt/crisp flavor in the duck? Thanks.

Kristen M. January 25, 2011
We're thinking something bright and acidic, like this Couscous with Roasted Fennel and Toasted Almonds: http://bit.ly/8Zmpgb or maybe a little tempered bitterness, like in Amanda's Broccoli Rabe in Lemon Cream: http://bit.ly/50EDvC You won't want a compote or sauce getting in the way of all this great crispy skin though.

Jocelyn G. January 27, 2011
Just want to clarify that the duck *does not* cook on a rack. Is the duck basically cooking in its rendered fat? Not that there's anything wrong with that :-). Thanks.

Kristen M. January 27, 2011
Merrill didn't use a rack, which may have helped the breast meat stay juicy during the first couple hours before flipping.

Jocelyn G. January 27, 2011
Thanks very much for your super-helpfulness.