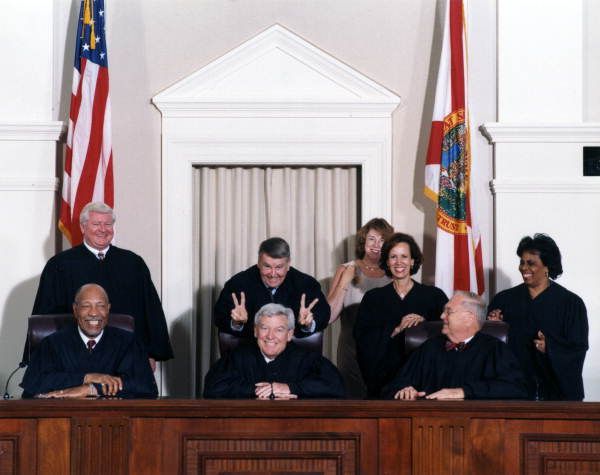 Photo (of the Florida Supreme Court in 2000) by Newhall Photography.

deidre.dostal September 6, 2011
Madeleine Kamman; a famous classic French Chef that ranks with James Beard, etc., [which truly is "Culinary Elitism"], aired in San Francisco circa 1980's and her recipes were centered around old French Cuisine, with butter and cream.

However, very different from Paul Dean--in the sophistication level. "Madeleine's French cooking standards of using the freshest foods and the proper techniques. Never compromising on her cooking, she used the bounty of American ingredients and melded them with her homeland's techniques. A whole new culinary world was born: a French chef cooking and enjoying such dishes as Corn Grits with Okra and Squashed Tomatoes."

I cooked with Madeline once and you were NOT going to tell her anything about food.

The (3) shows I refuse to watch: Paula Dean, Rachael Ray & and the most significant person Anthony forgot to mention: Semi-Homemade, Sandra Lee

I so agree: "Anthony Bourdain's candid and colorful comments about Paula Deen were absolutely delightful and refreshing."

Johnny D. September 5, 2011
Rock on Tonee!...PD comes from the "Cream of Mushroom soup southern cooking" the type of food feed to us after the help went home...lunch was always the big meal in my Alabama home because it had the verite of soul food mixed with influences of Creole, Cajun and Low Country prepared by black women who knew that fried chicken, biscuits baked with lard and long simmered greens were what God intended us to eat...Mr. Bourdain is a cook...a true Blue collar hot line guy who tells it like it is....

nratt September 5, 2011
Tony speaks as Tony does; no reservations!!

nratt September 5, 2011
Tony speaks as Tony does; no reservations!!

RisaCooks September 4, 2011
I am a fan of Bourdain too BUT I thought he went a bit far in his interview in TV Guide. I have eaten at Deen's restaurant and the food is so good. There are healthier dishes on the menu, not just lots of butter and mayo. Most folks go there for the buffet (which ain't cheap BTW). When U R on vacation U don't care about the calories or the fat (just saying).

Also, she is not obese. She is fat, yes, but even she admits that she doesn't eat that way all the time. I don't think that she is the reason our children are fat (mine isn't). Making an assumption like that is what is evil. He doesn't have to like the Food Network (he DID work for them at one point - Anyone remember "A Cooks Tour").

Yes, Deen does work for Smithfield, and yes, we are not happy with that, but saying that she is "dangerous" is a bit strong.

I realize that Bourdain's modus operandi is to be kind of curmudgeonly and cynical but being nasty to someone like Deen is ridiculous.

Also his "apology" was far from one. So even though he was a prick for what he did, doesn't mean I will stop watching him OR stop reading his books. I won't ban him from my tv or my book shelves.

I just think he should think before he speaks. His mouth can get him into big trouble.

Forget that her accent has gotten progressively thicker to the point of caricature over the years. Here's an obese woman pushing disgusting recipes as if they're authentic Southern cooking. Shoving oversized helpings of food into her piggy mouth, looking as if she is experiencing a transcendant moment is more than enough to make a well-mannered Southern hostess cringe. Why can't Food Network have a program that features healthy Southern cooking, instead of this unhealthy cartoon of a woman?

At least, Bourdain is honest about owning his past, about honestly reviewing the food he eats, and actually knows good food! All more than I can say about Paula Deen, one of the many jokes Food Network is putting over on the viewing public.

Shame on Frank Bruni. Paula Deen hijacked what could have been a conversation, and led Mr. Bruni down the sideroad of deliberate misinterpretation of Mr. Bourdain's comments. Granted, Bourdain could have been more polite but that's not our straight-shooting Tony.he wasn't advocating that people buy:conse "$58 steaks" his emphasis was on our children eating healthier and, by the way, unhealthy food costs more than healthy (buy less, cost less, eat less), especially factoring in health costs over a lifetime. We're facing not only neatly issues, but also a generation that will not have the same life expectancy as their parents. Ms. Deen is unconsciousably wrong in pushing boatloads of sugar and deep fat frying. It's neither politics nor culinary elitism (a media-created term?). It simple common sense, otherwise known as "we are what we eat." I urge Mr. Bruni to work to regain his sense of integity, and for Ms. Deen to work on getting some(integrity). Mr. Bourdain, I salute you. May you continue to give your cojones.a regular outing!

SKK September 4, 2011
Useful comments and your last line has me still chuckling!

BandannaNinja September 4, 2011
SKK-yes the village voice article is GREAT. I think it makes an excellent point that these are two different people expressing two different ideas. Anyhow, I love Bourdain and I watch No Reservations regularly and I think really it's best to take most of what he says with a grain of salt. It's his shtick so-to-speak. He's a cynical guy, he says cynical things. Now I will say that Sandra Lee's show is more creepy than charming and her recipes (which I have actually tested) should be marketed as semi-homemade alternatives to emetics.

As for GMO foods, I have studied enough Microbiology and Plant pathology to say that I think they have been given a very overhyped bad reputation. They are actually very beneficial when used PROPERLY however I think things got blown WAY out of proportion when companies like Monsanto, who have made more than their fair share of scandalous headlines, abused this technology.

I agree we should have more access to information to what is in our food however that doesn't mean banning something that could "possibly" be dangerous when we really don't know anything at all.

boulangere September 4, 2011
Love your comments. Paula Deen vs. Anthony Bourdain, not even a fair fight. I've given up my TV habit, but I swear Paula Deen lays awake nights trying to find a way to deep fry butter. Yes, I love her boot-strap story. But enough is enough.

SKK September 2, 2011
Regarding the Deen vs Bourdain confab, neither won. What we are talking about is the politics of food. An interesting articley by Rebecca Marx who uses the opportunity of this issue to look into what shapes the thinking of each side, including Bruni who blew the whole thing out of proportion. http://blogs.villagevoice.com/forkintheroad/2011/08/bruni_culinary.php

Losers in my opinon are:

Nestle Chairman of the Board "the chairman of the board of one of the largest food companies in the world—whose tripling in profits from 2009 to nearly $43 billion in 2010 was generating from selling mainly processed foods produced with inputs from industrial, chemical farms—is “skeptical” of organic food, reports FastCompany.com.
http://civileats.com/2011/08/29/three-strikes-youre-out-the-three-pronged-attack-on-organic-food-and-why-its-wrong/#more-13050

http://www.right2knowmarch.org/ "The GMO Right2Know March is the first of it’s kind in America, and will have daily events between its kickoff in New York City and its finale at the White House, in Washington, DC. Come for the knowledgeable speakers, fun presentations, camping, and much, much more! Now is your chance to make your voice heard. We will win back our Right to Know what’s in our food – one step at a time!"

boulangere September 4, 2011
Thank you SKK for some good, grounded research.