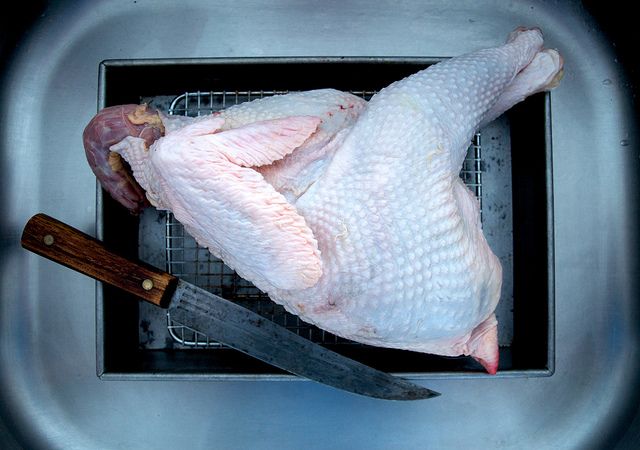 I was in the mood to tinker. I had been thinking a lot about Coq au Vin, which was weird since I pretty much always found the dish muddled. It's one of those stews that cooks so long it is hard to distinguish any one real flavor, but I guess I was thinking about it because it was such a classic French farmhouse dish, and the one French dish that most Americans had heard of vis-à-vis Julia Child. It had been a long time since I had made it, years in fact, and I had to wonder, knowing my cooking skills had improved considerably since then, if it might not be better this time around.

I decided I would patiently wait on Sunday. Then I would get my classic French cuisine on, put on some pre-1930s jazz, and start the day by making Pain de Campagne, clarifying butter, peeling carrots, and trimming pearl onions. I would spend the day in the kitchen, my happy place, with a fire in the fireplace and the girls and their Momma just an eyeshot away playing games at the kitchen table. 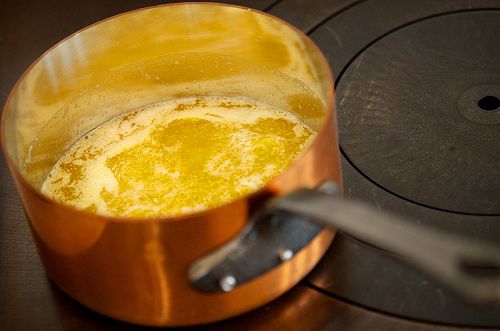 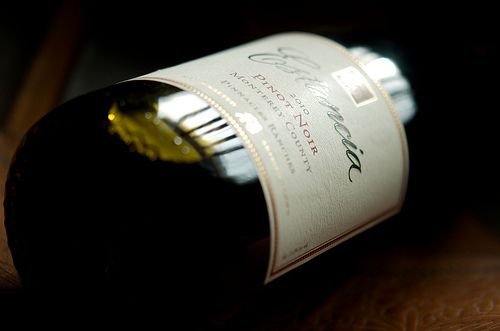 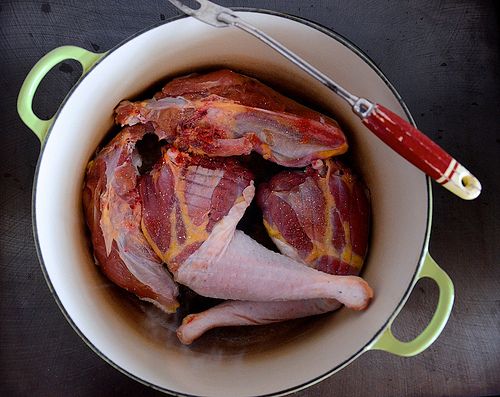 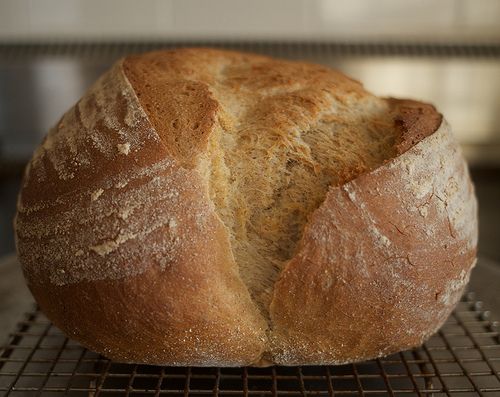 It used to be I would only let Vivian name the chickens Breakfast, Lunch, or Dinner so she wouldn't get attached. That way, when anyone asked her a chicken's name, she would answer appropriately depending on which chicken was being pointed to. Nevertheless, over time she developed a disliking for the roosters and only wanted to eat them. She had been telling me for a month we needed to eat Rusty. Rusty has been a good rooster though, and age was his pardon this time around. I would cull a younger bird.

If I was going to do this I was going whole hog, so I set in by air chilling, in the fridge in the garage, a 24-week-old rooster that I just brought back from the processor along with a few geese and ducks that I had also raised. They needed a little hang time so the natural enzymes in the meat would do their thing and tenderize the birds a bit — after all, there was no need to rush into this thing. 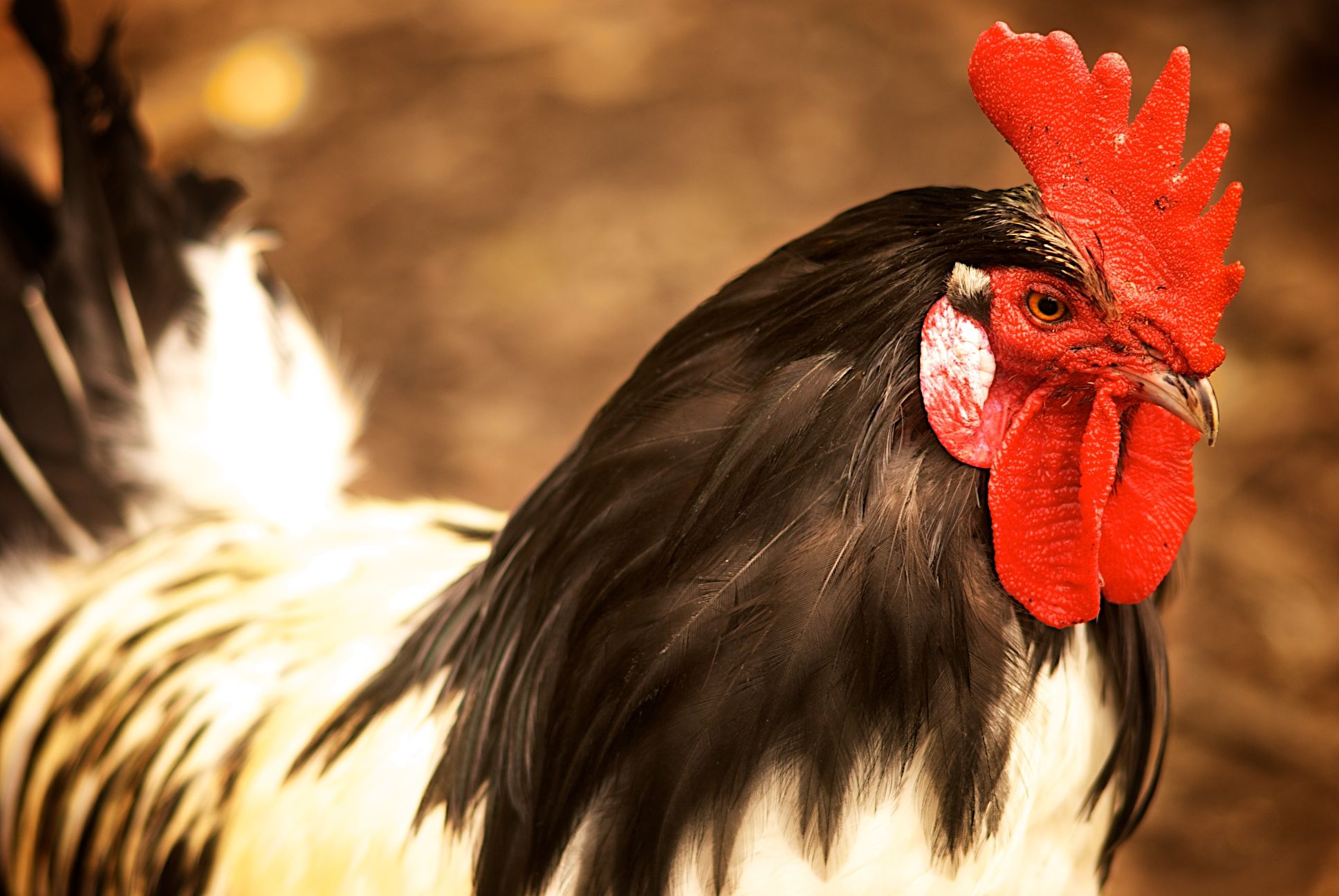 The flavor profile of a rooster is what interests me. It is different, wildly different — wild might be the closest term, though maybe not exact. No, it isn't gamey, it's unctuous, and the breed I butchered, a Black Langshan, is dark, darker than turkey thighs, with extremely rich meat that's even sticky like braised short ribs or beef cheeks. It's something that many Americans have never eaten.

Never eaten because rumor has always foretold of a tough, virtually inedible bird. I am here to tell you that if you raise your heritage breed rooster to optimal butchering age, it will be far from inedible, and more like incredible. Now, that doesn't mean you are going to roast it in the oven at a high temperature until it is dry and tough, but rather that you are going to fit the right cooking method to the right type of bird. With a rooster, you want to braise it. 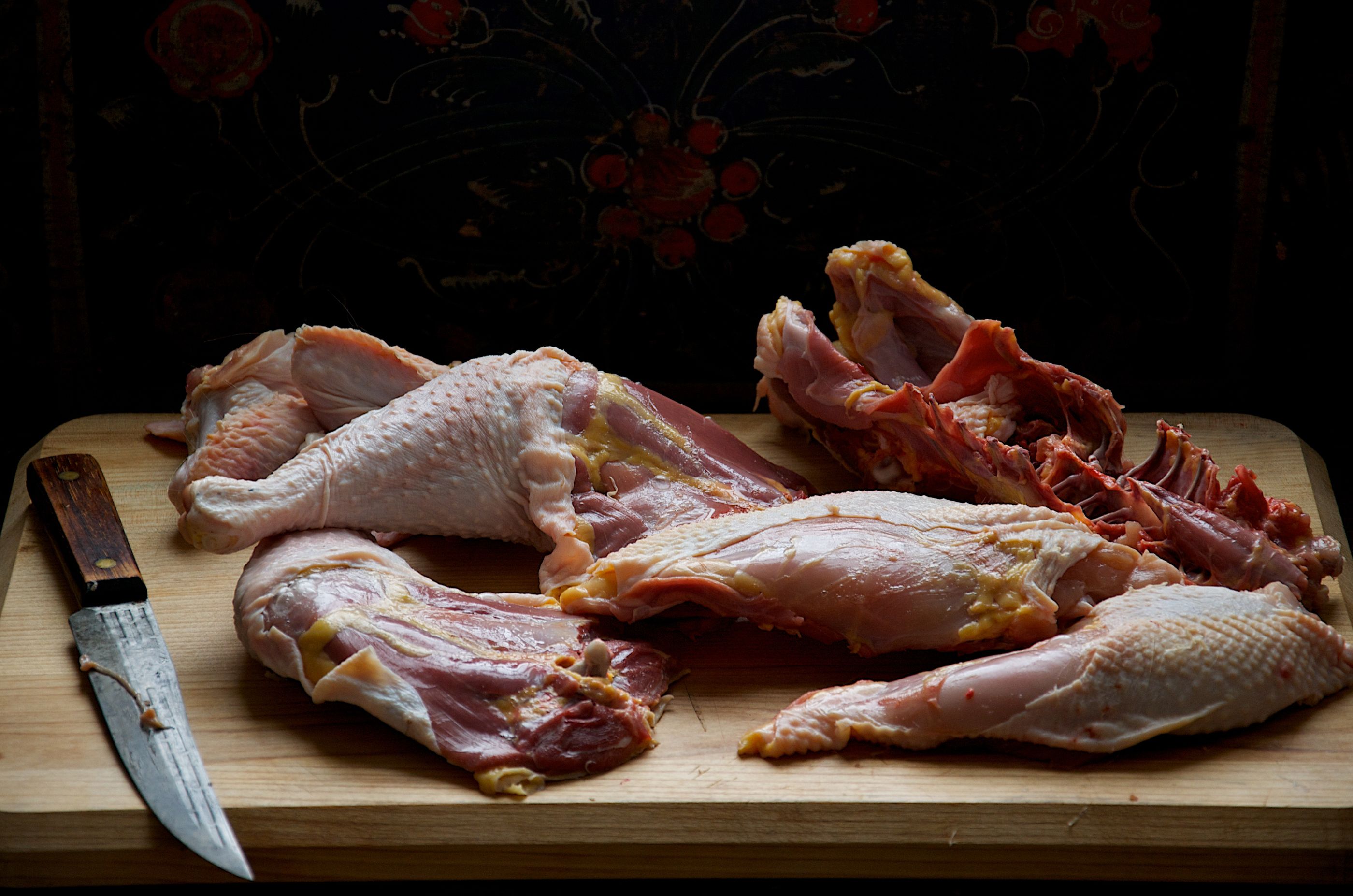 The meat sizzled as I gently laid the it into the hot clarified butter, but it didn't splatter. It didn't splatter because it was air chilled, so when it hit the oil excess water didn't spew and pop grease everywhere. The skin became very brown and crispy. I added the mirepoix. The smell was ridiculous as the chicken fat mingled with the butter and vegetables. I scraped around on the bottom of the pan getting at all the little brown and tasty bits. The wine sizzled when it hit the bottom of the pan deglazing the rest of the stuck on goodness. Then the glug glug glug as the whole bottle of wine emptied. The house was starting to smell so good. The wine reduced and I added the stock. I went over to the table and sat down with the girls to play a game of Clue, my stomach grumbled. 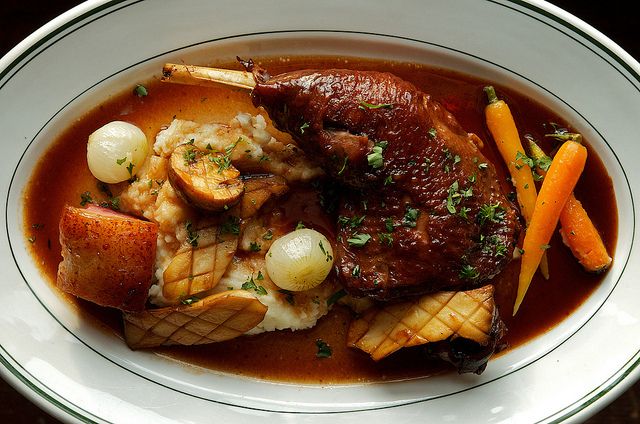 A great way to serve this would be over Aliwaks's Fluffy Mashed Potatoes.

clarified butter
3 1/2 pound rooster or fryer, quartered
1 bottle burgundy or pinot noir
2 onions, peeled, trimmed, and quartered
2 carrots, peeled and cut into 1 inch chunks
2 celery stalks, washed, trimmed, and cut into 1 inch chunks
1 leek, top only, rinsed (save the whites for another dish)
6 thyme sprigs
5 curly leaf parsley sprigs
5 cups rich goose, duck, or chicken stock
2 1/2 tablespoons tomato paste
Kosher salt and fresh ground pepper
piece of parchment paper cut into a round to fit the pot
8 smallish carrots, about 1/2 inch round, peeled and trimmed
8 boiler onions, peeled and trimmed
a healthy handful of mushrooms, if they are large cut in half and scored
8 ounces slab of unsmoked bacon or pancetta

blanka.n June 9, 2012
I've been making this dish for 25 years or so. I must say I am really impressed with the richness and complexity of your ingredients - can't wait to make it for my husband. It's his favorite. Sadly I might have to take all the credit.
Thank you!

blanka.n June 9, 2012
I've been making this dish for 25 years or so. I must say I am really impressed with the richness and complexity of your ingredients - can't wait to make it for my husband. It's his favorite. Sadly I might have to take all the credit.
Thank you!

Hippo F. February 5, 2012
I just made Coq Au Vin this week with an old layer of ours. My husband loved it, as did the neighbors. Me? I am thinking of making stock with the remaining 3...

TriciaG February 5, 2012
I love Sunday food -- takes me back to spending Sundays with my grandparents and eating dinner there. Thank you!

MrsWheelbarrow February 4, 2012
Tom, I'm so so pleased to see this column debut. I can't wait to cook along. Just wish I had a rooster in the backyard. Wait a second... maybe I just wish I lived closer to you.

healthierkitchen February 3, 2012
Always love reading your column and savoring your descriptions and photos. Another beauty!

BlueKaleRoad February 2, 2012
I love your new column! Your writing and photography is just beautiful. What a striking rooster - we have 3 pretty girls pecking around our backyard but aren't allowed roosters.

TasteFood February 1, 2012
Oh good, I was missing you on Food2. This sounds like a wonderful column - congratulations!

mariaraynal February 1, 2012
Tom, it's so nice to see your wonderful stories and gorgeous photos back on Food52. Looking forward to many more.

Miafoodie January 31, 2012
I add my congratulations. . . Food 52 is the best!!
Looking forward to your column,prose, poetry and recipes.
Forgot to mention your photography and hopefully an occasional
picture of your beautiful girls. Here's to success. . . . .

Oui, C. January 31, 2012
Nice to see you back in the saddle, my friend. I'm so excited about this new series of yours. I can't believe the color of the rooster meat, it is so dark it looks like duck to me....bet it was fabulous! - S

thirschfeld February 1, 2012
thanks Oui, it is a pleasure to be back. I think I am going to get to a batch of those oatmeal cookies at Oui Chef this weekend. They look great!

LLStone January 31, 2012
The article and pictures are inspiring! I have a technical question - when you take your roosters/geese/ducks/guineas to the processor, do you take them alive or dead? I also have chickens/roosters/guineas and while I've had some bad luck with my own dogs and some other critters getting my fowl, I wonder about the processing because, at some point, I will want to know how to do this!

thirschfeld January 31, 2012
Thanks LLStone. You take them alive and they take it from there. I know there is a place near Jasper that processes but they are closed until May, if I remember right, as are most poultry processors in winter.

LLStone January 31, 2012
Thanks, Tom. It's super hard to catch guineas!! :) But thanks, that helps. I think there is a place in Darmstadt that is now processing poultry. I didn't really want to end their life too early (freshness-wise), although I was totally prepared to do so! And, Jasper is not too far.

pierino January 31, 2012
I am sooo looking forward to this column Bro T. Put on some Django while you are cooking the coq. And I do love rooster too.

thirschfeld January 31, 2012
Nothing wrong with a little Django and thanks.

TheWimpyVegetarian January 31, 2012
Welcome back! I'd been missing your writing, food and photography :-) So good to see you back here.

thirschfeld January 31, 2012
Thanks Suzanne. And thanks for the WimpyVegetarian I have been enjoying it.

arielleclementine January 31, 2012
absolutely wonderful! thrilled we get more columns from you!

thirschfeld January 31, 2012
thanks arielleclementine. I notice you have a little one in your arms in your profile pic. ?

arielleclementine January 31, 2012
i had a baby! his name is henry, and he just turned 9 months old. he is delightfully plump and loves all manner of foods :) he ate a number of thirschfeld dinners in utero, and is now joining us for more at the dinner table! lucky him and lucky us!

thirschfeld February 1, 2012
What a great name. He looks like a cutie. Lucky you and congrats on a life changer!

thirschfeld January 31, 2012
Kelly surprisingly this time the bottle went into the pot!

duclosbe1 January 31, 2012
I'm glad we still get to hear from you, Tom! That last photo of the coq au vin is breathtaking. Now I have to try and patiently wait until your next column.

jenniebgood January 31, 2012
Jenny on Mondays. Tom on Sundays. This keeps getting better! Congratulations on the column Tom - looking forward to reading it!

Burnt O. January 31, 2012
I hope you'll be turning all these columns into a book one day! I am putting in my pre-order now.

thirschfeld January 31, 2012
I am working on some things along that order but if someone wanted to get in touch with me that would be fine too. LOL. thanks Burnt Offerings you are too kind

Burnt O. January 31, 2012
I'm serious. At the risk of fawning, I think you could give Gabby Hamilton a run for her money with your prose.