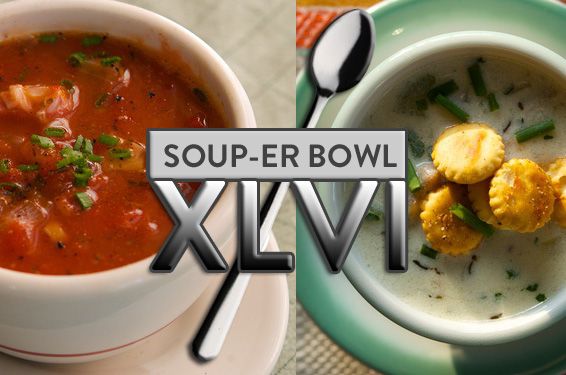 We've all been waiting for this moment. A trail of blood, tears, and broken dreams lies behind us. No, silly, we're not talking about the thrilling finish of The Piglet Tournament of Cookbooks!

We're talking about the other thing happening this week, the biggest eating day of the year (besides Thanksgiving and Meatopia). The thing that, strangely, we're not supposed to refer to by name. So, to keep it all legal, we'll say it with soup.

At the parties you'll all be throwing this Sunday, give the chili a year off. Because 2012 is the year of the chowder: New England vs. Manhattan, clam vs. clam.

Which team is your money on? Pick your Soup-er Sunday menu below (or hedge your bets and serve them both). 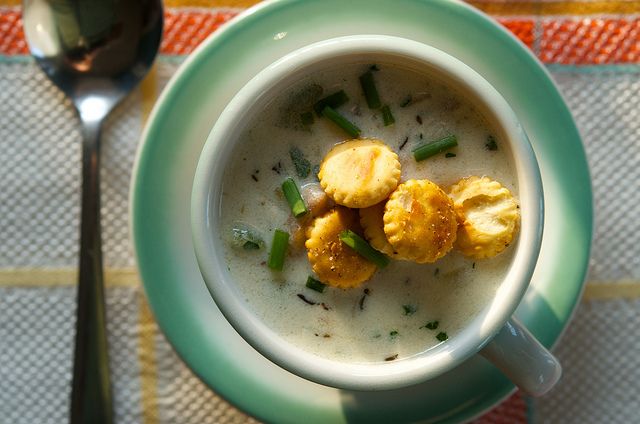 Representative chowder: New England Clam Chowder. The perennial favorite for a reason: rich and brawny, a patriotic charmer -- and more than ready for some hot vengeance. With chives on top. 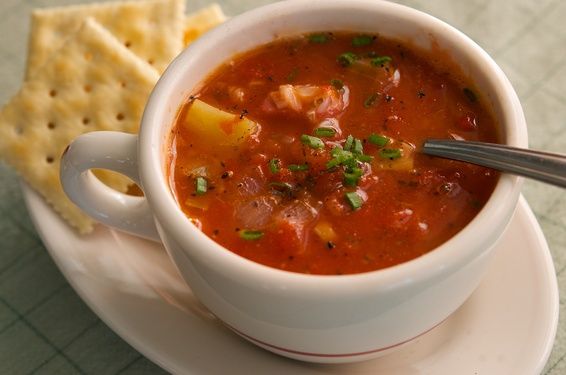 May the best chowder win.

Photos and recipes by the great Tom Hirschfeld of bonafidefarmfood.com

Lynne G. October 14, 2013
If you've ever had a steaming cup of NE Clam Chowder on a chilly October Martha's Vineyard day you will no doubt have never forgotten the bliss...New England style all the way.

deucemom February 12, 2012
I am definitely a Manhattan Clam Chowder fan. I am happy to find a couple of sources for good recipes - I haven't made it in years. Thank you, once again, Food52!

Hillerns February 12, 2012
Can't we all just get along? Manhattan vs. New England? In name alone, they are comparative, but they hardly resemble the same dish. As Texas chili and everything else, I suppose.

On both subjects, I have my thoughts. Being from Oregon, we have our take on a little bit of everything, but we respect all chowders and chilies, in general. For chili fans and chowder fans, I offer the following:

baltimoregon February 5, 2012
Manhattan all the way! I recommend the recipe from Arthur Schwartz's New York City food (made with hand-dug clams from the Oregon Coast); http://baltimoregon.com/2009/05/18/digging-clams-from-sandy-spade-to-chowder-bowl/. Wish I'd thought of this in time!

We had The Silver Palate's excellent chili for a crowd, enhanced with Kalamata olives: http://baltimoregon.com/2009/02/10/the-simplicity-of-soup-a-meaty-tangy-chili-for-the-ages/

HRH February 5, 2012
Thank you, for a "bowl" I can actually care about!!! As much as I hate to side with NY on anything, I'm definitely going for the Manhattan on this one...

inpatskitchen February 3, 2012
Sorry...so many of us don't live near a coast where we can get fresh clams and fresh clam liquor..we can still make excellent chowder..and we do!! We all make do with what we have...I make a New England chowder very similar to Tom's and around here we think it's excellent!!

Greenstuff February 4, 2012
Don't get me wrong, I've no doubt it's excellent. Just not a New England v. New York smackdown!

Sydney February 3, 2012
If this says anything about what may happen with Sunday's scoreboard, I say it's a close call! This is an amazing bowl showdown! However, my preference for this classic, is without doubt the New England version!

MealPlanRescue February 3, 2012
The only problem I see is not all chowders are created equal on either side. But I'm going to give my vote to the Manhattan Clam Chowder. And if you've never had it from a small joint in Carmel, CA called Flaherty's, you're missing out.

Nozlee S. February 3, 2012
This is AMAZING, and I don't know the first thing about football. I'm psyched to make one of these this weekend!