Winner of Your Best Mangoes

Congratulations to boulangere whose Cambodian-Style Spring Rolls won this week's contest for Your Best Mangoes! 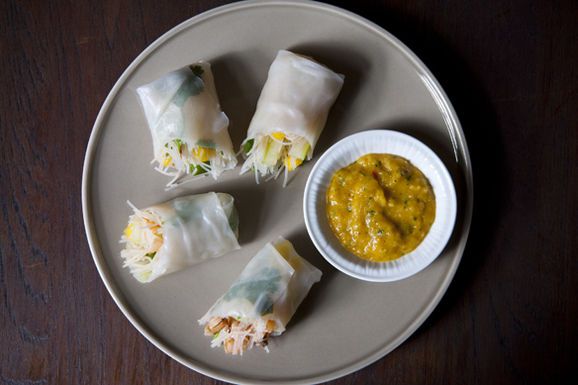 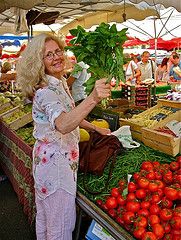 The first time I ever prepared a "meal" myself was when I was 7 years old. My mother had gotten me a Betty Crocker children's cookbook and I thought the photo of carefully sectioned grapefruit with a maraschino cherry was the most exotic thing in the world. It took me a couple of hours to make them for my parents and sisters, and I don't recall that anyone complained about the wait. But then, it's entirely possible my mother was sneaking real food to them. I think that may have been the only time in our lives that my mother bought maraschino cherries.

2. What's your least favorite food?
I'm just not crazy about squid, even when it calls itself calamari.

3. What is the best thing you've made so far this year?
First Night in Florence Spaghetti!

4. Describe your most spectacular kitchen disaster.
There have been so many, but this one stands out as an example of "if at first you don't succeed, erase all evidence of ever having tried." Culinary school is ripe with I Love Lucy moments. One night, 2 classmates and I were in a kitchen upstairs from our usual one at the time, making an exponentially increased batch of chocolate mousse. That probably gives you an idea where this is going. We were using a 120-quart Hobart mixer to whip the cream. I'd left the kitchen briefly, and when I returned, it was clear that a mathematical error had been made. The first thing I noticed was whipped cream sloshing up over the edge of the hot-tub-sized bowl and plopping all around the mixer. Then I realized that Bridget and Jamie were shrieking as they dodged blobs of whipped cream that were being lobbed around like mortars. It was so hysterically funny that I literally collapsed on the floor laughing while they furiously inched their way to the mixer to shut it off.  Even as we rushed to clean up the considerable mess, I'd periodically come apart all over again. I still do whenever I think about it.

5. What is your idea of comfort food?
Softly scrambled eggs with some just-snipped chives.

7. What's your favorite food-related scene in a movie?
Oh, easy!  The scene in The Seduction of Joe Tynan with Meryl Streep and Alan Alda where they're sitting in bed with a massive, overflowing tray of fruit that he's wolfing down and she says, "Why can't you just smoke like other men?"

8. If you could make a show-stopping dinner for one person, living or dead, who would it be?
Richard Olney. His Simple French Food is on my night stand right now, as I reread it yet again.

9. You prefer to cook: a) alone; b) with others; c) it depends on your mood
I always cook alone, but I love entertaining and having house guests so I have others in the kitchen.

10. When it comes to tidying up, you usually: a) clean as you cook; b) do all the dishes once you've finished cooking; c) leave the kitchen a shambles for your spouse/roommate/kids to clean.
A, definitely. Especially whipped cream.

SKK June 11, 2012
I don't know where I have been to have missed this amazing recipe! Congratulations on your win, another well deserved win. Boulanger, I love this photo of you! You are more beautiful that your kitties.

boulangere June 17, 2012
You are so kind, SKK. That may be the nicest thing anyone has ever said about me. But I don't think the cats should know.

jenniebgood May 31, 2012
boulangere - I love your description of your kitchen mishap above - I was giggling as I read it! Congratulations on winning the mango contest -these spring rolls sound amazing and I can't wait to try them!

creamtea May 29, 2012
Congratulations, boulangere! These look great. Your whole q & a and everyone's responses have me still chuckling.

fiveandspice May 29, 2012
Congrats again B! Your whipped cream story is the funniest EVER!

deanna1001 May 25, 2012
Congratulations on this fabulous winner! Making it this weekend for sure.

Loooooooosie - you got some 'splainin to do... Thanks for the belly laugh. That story reminded me of watching my mother attempt to make chocolate sauce in a blender, with the spoon in it. All over the ceiling, kids, kitchen....same idea, different color. I'm still laughing many years later...

boulangere May 25, 2012
OMG, I am laughing my head off! Fantastic image! Have a wonderful weekend!

aargersi May 25, 2012
BIG Congrats B! These look fantastic! LOVE the Q&A as well. You are a great cook AND funny!!

boulangere May 25, 2012
Thank you Ab! The ability to laugh at oneself will help get past many of life's messes, don't you think?

BoulderGalinTokyo May 24, 2012
So nice to meet the person behind such inspiring recipes!

boulangere May 24, 2012
Thank you very kindly. And watch out for whipped cream - it'll get you if you're not watching!

dymnyno May 24, 2012
Congratulations! You concocted a great recipe which I will be making soon! I love spring rolls and the mango addition is perfect. Whew!!! This week was a hard one to pick...you both were winners.

boulangere May 24, 2012
The whole batch contained marvelous recipes. Thanks for your kind words!

drbabs May 24, 2012
Congratulations, boulangere! I love that you even turned your winner's interview into a perfect story with a wonderful circular ending. Both your writing and your recipes inspire me. XO

boulangere May 24, 2012
Thank you so much, DrB, and thank you profoundly for your help with my eyes the other night!

gingerroot May 24, 2012
Congratulations, boulangere! I've been traveling all week but was delighted to turn on my phone in Denver airport yesterday to see that your lovely recipe won. I can't wait to try it.

boulangere May 24, 2012
Thank you, Gingerroot, and welcome home!

Katie May 24, 2012
Congratulations! I loved reading about your hilarious kitchen disaster; it makes me feel better about my many "miscalculations" in cooking. I look forward to trying your spring rolls- they look mouthwatering!

meganvt01 May 24, 2012
Your I Love Lucy story made me laugh out loud! I love it. Congrats on an inspiring dish that I will be making this weekend (despite my trepidation about creating the ugliest spring rolls on the planet :)

boulangere May 24, 2012
I only wish I had pictures! If I could get the hang of these, I'm sure you can, too. Fortunately, rice paper wrappers are inexpensive, so buy extra, and if one tears, dump out the filling and start over. Persevere!

hardlikearmour May 24, 2012
Congratulations, b! You're catastrophe could've been an episode of I Love Lucy!!

boulangere May 24, 2012
Thank you, hla. I still see it vividly in my mind. I think it may have been a first for that kitchen.

Kitchen B. May 24, 2012
Congratulations - these are in my weekend plans! Someday I'll buy a round the world ticket and travel 'Food52' - stopping in every US state, enjoying scones, jams, and wonderful foods from food52ers. Till then I remain in awe of the love, the friendships the support we all give and share.

boulangere May 24, 2012
Travel52 - I love it! This is a remarkable place that opens us to all sorts of possibilities. Have a wonderful weekend!

And what IS it about whipped cream?? I have experienced similar disaster scenarios involving said ingredient, minus the Hobart, plus one husband.

boulangere May 23, 2012
SO glad to know I'm not alone! Just imagine 120 quarts of it. I'll honestly never forget it. Glad you got a husband out of the deal!

Bevi May 23, 2012
It's just great that you are recognized for your inspiring food, which you always present with the best stories and advice.

calendargirl May 23, 2012
Congratulations, boulangere! Love your voice and cannot wait to try these.