It's Recipe Writing Week at FOOD52 -- so why are we talking about George Carlin? 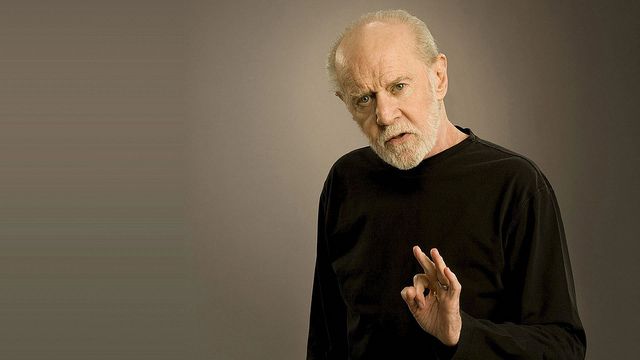 The late, legendary comedian George Carlin was as outspoken about nonsense lingo like "jumbo shrimp" as he ever was about religion or politics, and he mercilessly skewered the excesses and misdirections of the English language in his routines. He was like William Safire, but with a lot more swearing.

Carlin may have thought when he complained about "rain events" or "boarding processes" that he was shouting into a vacuum, but with at least one of his rants (and surely more), he's made a difference. He may yet topple one of the cluttered words that so infuriated him:

That's another complaint of mine -- too much use of this prefix "pre". It's all over the language now — "pre"-this, "pre"-that, place the turkey in a "preheated" oven. It's ridiculous! There are only two states an oven can possibly exist in: Heated or unheated! "Preheated" is a meaningless fucking term! -- George Carlin, 1992

Note that his argument has nothing to do with fighting for or against turning on the oven well in advance of putting food inside. Carlin doesn't care -- no matter how far in advance you do it, you're still just heating the oven. 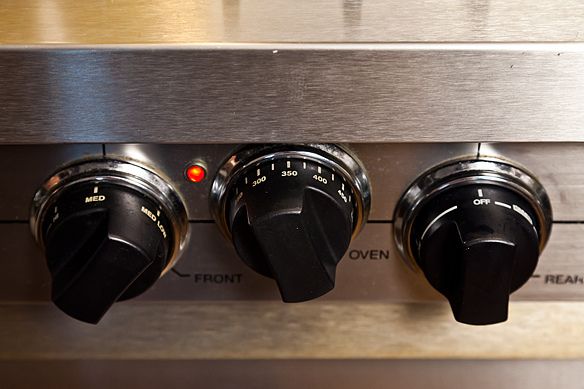 Here's where the recipes come in.

Over Thanksgiving 2006, Todd Coleman, then the new Executive Food Editor of Saveur, was watching a George Carlin marathon on HBO with his brother and saw the bit, from Carlin's 1992 comedy special "Jammin' in New York". 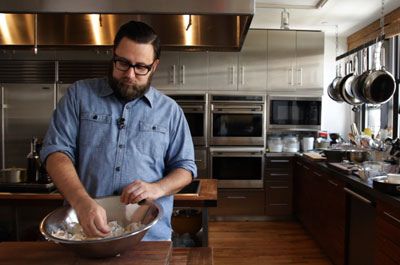 "I thought 'My god, he's absolutely right. I'm going to change it'," Coleman recently told me. He did so immediately, and preheat was replaced by heat in the January 2007 issue of Saveur. "Back of the house dictates can get musty, but people are loathe to change them," Coleman said. But there was a new editorial regime at the magazine, and they were looking to shake things up. (Plus, with space at a premium, hacking off a prefix is much easier than adding anything new.)

When Amanda and Merrill launched FOOD52 in 2009, they were all about paradigm shifts too -- and Merrill's husband Jonathan is a George Carlin fan. So from the start, FOOD52's house style (as much as a crowd-sourced website can have a house style) has been in the Carlin mold: down with preheat! If you flip through The FOOD52 Cookbook or its precursor The Essential New York Times Cookbook, you'll see. 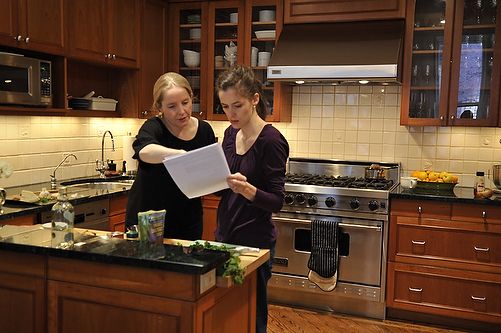 The word preheat has been around since 1862, and used in the context of home cooking from around 1915 (per Jesse Sheidlower, Editor-at-Large of the Oxford English Dictionary).

But in the first half of the 20th century, many recipes still didn't explicitly prompt cooks to turn the oven on. It was assumed that they would read ahead and notice Bake in a moderately slow oven in step 3, for example. In modern recipes, ample warning -- not just to turn on the oven, but to pre-turn it on -- has become the norm. (Food historians out there -- feel free to chime in.) But that's starting to change.

It's natural to feel attached to the familiar preheat -- Julia Child told us to and so did The Joy of Cooking. It's in the fabric of our education as cooks; in baking recipes we've followed all our lives. Who is Carlin to tear that down?

But you know he's right. When a recipe merely instructs Heat the oven to 350°F, will anyone really be confused about what to do? As Safire himself said, "What cook pops a pie into an unpreheated oven?"

Many of the big food publications -- Bon Appetit, Food & Wine, The New York Times -- still tell us to preheat, characters be damned. But we smaller, fast-moving types are setting the stage for a George Carlin-fueled recipe revolution. 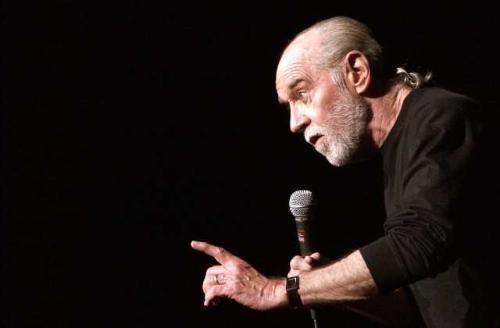 gr8chefmb July 2, 2012
George Carlin was SERIOUSLY FUNNY and he is most definitely missed! His riffs on just about everything and anything induced roll-on-the-floor/side-splitting laughter (I think it was mostly due to his facial expressions myself - they were sometimes funnier than his words) while at the same were profoundly thought-provoking. Sure, he was a bit profane; so were a lot of comedians. I have smile and I am laughing just remembering some of his riffs and bits, such as cleaning out the refrigerator: "Well, you smell it! I don't wanna smell it." Another personal fave is his take on words and phrases such as beer nuts, cotton balls, pussyfoot and garbanzos. :-)

dymnyno July 2, 2012
Before the wine business Freddy and I were in the radio broadcasting business. George Carlin's Seven Dirty Words legally set the bar for words that could not be used on radio.

BoulderGalinTokyo July 1, 2012
I agree with dymnyno it is a waste of energy to turn the oven on so soon--my gas convention oven will heat in about a minute, so pointless to turn it on while I boil pasta for a casserole, etc. KNOW THY OVEN.

But I agree with Greenstuff, i thought food52 was about experienced cooks writing recipes and sharing new ideas so that beginners and experienced alike can learn.

Greenstuff June 29, 2012
I just remembered that in years past, I had electric ovens with "preheat," "bake," and "broil" settings. Under "preheat," both the top and bottom heating elements lit up. The goal was to heat the oven as quickly as possible. If you forgot to switch from "preheat" to "bake," your cakes would be pretty brown on top.

I haven't seen those separate settings for a long time. Do they still exist?

susan G. June 29, 2012
Most recipes that call for preheating give that direction as the first step in the process. Then, occasionally, they call for letting the meat sit in a marinade for an hour, or the bread dough to rise in the fridge overnight etc. Maybe that's the real meaning of preheat: walk into the kitchen, turn the oven on to the designated temperature, then start the prep no matter how long it takes!

ChrisVeros June 29, 2012
So if you started with, "heat the oven in advance of preparing the food so that it's hot when you're ready to put it in," preheat was a huge timesaver.

If you want to hear a real annoyance... my oven has a light that says "preheat". But it doesn't say whether it's preheat-ed or preheat-ing. Now that would be a helpful distinction.

Sophia H. June 29, 2012
Actually I think the preheated oven began with the introduction of gas ranges, it was a given the coal, or wood would have been previously heated, since the ranges were often used for heat as well as hot water for the entire house and were more of a hearth than a stove. Preheated was a peculiar issue of the gas-stove, also there was an initial fear of the gas stoves, people wondered if the gas was healthy and it would get into the food as it was cooking, Yeah, coal not, but gas? One recipe, Cooks Country, pointed this out, was designed to show the fuel and time efficiency of using gas, as well as it's convince and ease. The cold oven pound cake. You did not have to preheat and the was a revolution.

There is the other aspect of baking, you preheat an oven often when baking cakes and breads to a certain temp and length or time before you place your item in. The idea of preheating means to heat the oven to a temp and often for a specific amount of time to ensure proper results. Three ways of saying the same thing.

Here is another clue. Mrs Beeton, is the one who revolutionized the writing of recipes, prior to her books you had to read the entire recipe to know what ingredients you needed.

Here is an example,

Take a penny weight of flour, add three eggs, yolks beaten with equal weight, scraped sugar, till thick and creamy, whites beaten till stiff, add.... the complete recipe would be a run on sentence of ingredients, amount, additions and techniques. Again preheat oven or at what temp warm, hot very hot, at the beginning of the recipe save the cook from making bricks instead of feather biscuits.

TasteFood June 29, 2012
I'm feeling revolutionary. Off to heat my oven.

dymnyno June 29, 2012
Wow...I can see this going on to include a lot of nit picking! Remember that George Carlin is a comedian and this subject is not brain surgery.

AntoniaJames June 29, 2012
Okay, guilty as charged. And you're right. His "brand" was ranting. With a fair dose of irony included. ;o)

AntoniaJames June 29, 2012
Actually, I think he's sort of wrong. There are three states: off, on but increasing temperature to get to the desired temperature, and at the desired temperature. "Preheat" is a somewhat imperfect shorthand for "turn your oven on in enough time to make sure it's at 400 degrees when you're ready to put the pie in." The use of the prefix indicates that you are to do it beforehand. So I for one am not at all bothered by it. But then, I have a "life is too short" approach to just about everything. Carlin obviously did not. And, incidentally, I just came across a recipe for Cuban bread that has you put the dough into a cold oven and turn it on. Haven't tried it yet, but plan to do so this week. ;o)

Greenstuff June 29, 2012
"What cook pops a pie into an unpreheated oven?" I don't know, but it wouldn't surprise me to see a new cook do just that.
Author Comment

Kristen M. June 29, 2012
Fair point! But they probably wouldn't make that mistake if they were simply told to "Heat the oven" early enough in the recipe, where "Preheat" would normally be. The "pre-" doesn't really need to be there for a new cook to follow along.

dymnyno June 29, 2012
In the 70's when I was just getting going with cooking California was in crisis mode regarding resources, including electricity , gas, and water. so I "grew up" being admonished among a lot of things to begin cooking everything in a cold oven. The notion of turning on the oven in advance was that it was wasting energy. I have since disregarded that rule. That was also the era of the Smother's Brothers and their friend, George Carlin.