What happens when food stylist, entertaining expert, and cookbook author Susan Spungen finally gets to build her dream kitchen? She does it right. Follow her lead, get tips, and plot your own perfect kitchen in Building a Dream Kitchen on Food52.

Today: Working out of tiny kitchens was fun while it lasted. 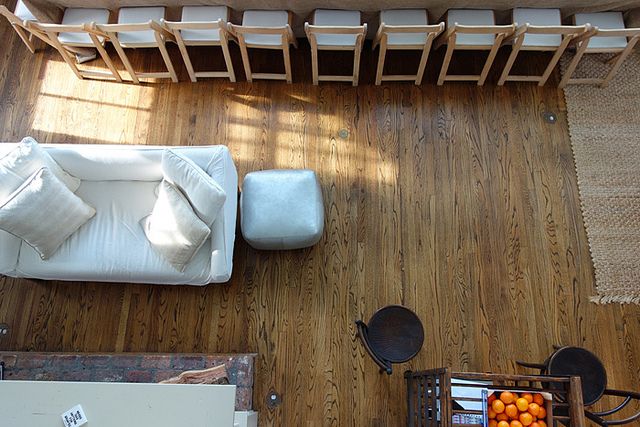 I recently bought a new weekend house in Amagansett, New York a.k.a. The Hamptons. The most thrilling thing about this is that I am finally getting to build my “dream kitchen” from scratch. I’ve been working around food my entire professional life, and have been working freelance, using both my small New York City apartment kitchen and my weekend house kitchen as my workspaces for the past 10 years.

I had another weekend house for 11 years before this one, but it was a 1,000-square-foot cottage, and the only part I could not afford to renovate was the tiny galley kitchen. So I painted the green Formica counters and old brown cabinets white, and made do. 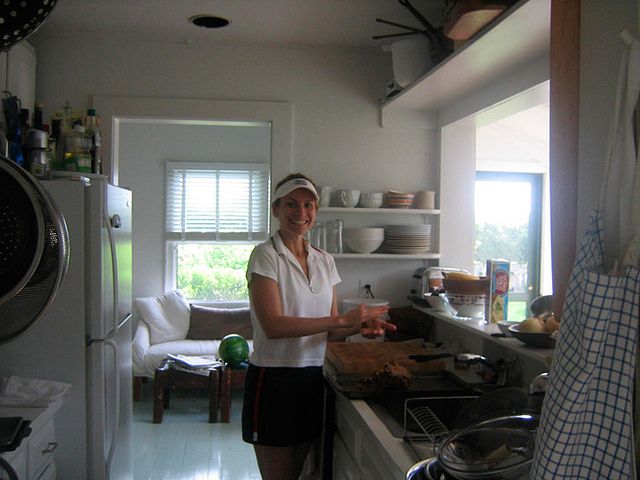 Here’s my friend Carolynn in my old kitchen. She must have come over to bake cookies before an evening party. You’ll notice she is balancing a cookie sheet on the edge of the sink, because there was so little counter space. There is also a watermelon in the living room! But we had fun!

It was a one-person kitchen at best, and also served as the only passageway from the front to the back of the house. Despite this, I developed many a recipe, styled and shot my entire cookbook Recipes, and had many food shoots there. My husband Steve and I entertained regularly there, and I cooked for as many as 100 people for my annual Fourth of July barbecue. 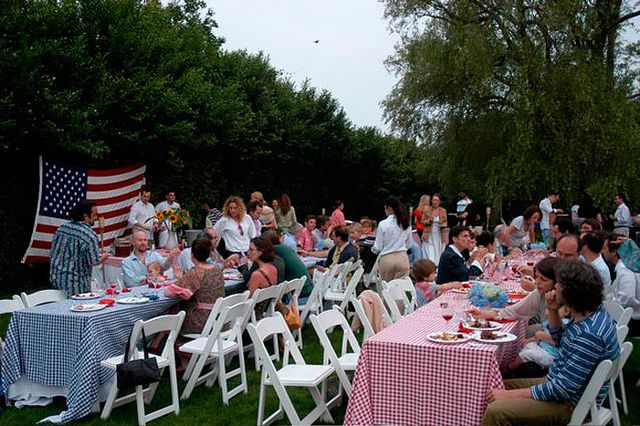 Did I really just cook for all these people in that little kitchen?

When I first found the new house, I fell in love with the setting and the feel of the house, but it needed work. At first I thought the kitchen could be renovated and possibly expanded a little, but after talking to some friends who had recent experience with building a house nearby, and subsequent conversations with architects and contractors, I began to think outside the box.

I realized the best solution was to build an addition that would house the new kitchen and dining room, which would really open up the living space. While the house felt a lot bigger than the old one, it was only bigger by about 650 square feet, which wasn’t much. The old kitchen, seen below, will become an annex to the new one, and will be full of storage, with a desk for me to sit at while I am working on recipes. 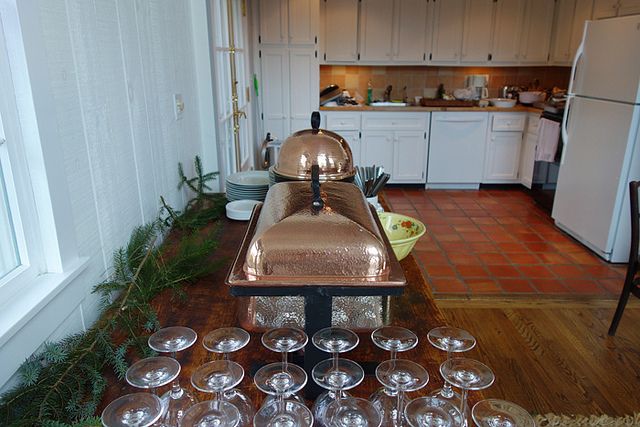 The old kitchen in the background. The new kitchen will be to the left of this table where there is now a wall. My desk will be where the sink is now.

Once the plans were underway, we decided to have a “before” party, not only to warm the house, but also so that our friends could appreciate what we had done, instead of always asking, “Was it always like this?” like they had about my first house, which was a total gut. We tacked the architect’s drawings to the walls, rented some tables and chairs, and invited 20 adults and some kids over for lunch on the Sunday before New Year’s Eve.

Here’s a bird’s-eye view of the living room with the few pieces of our furniture we moved in so we could live in the house before we started the renovation. The tables and chairs are rented. 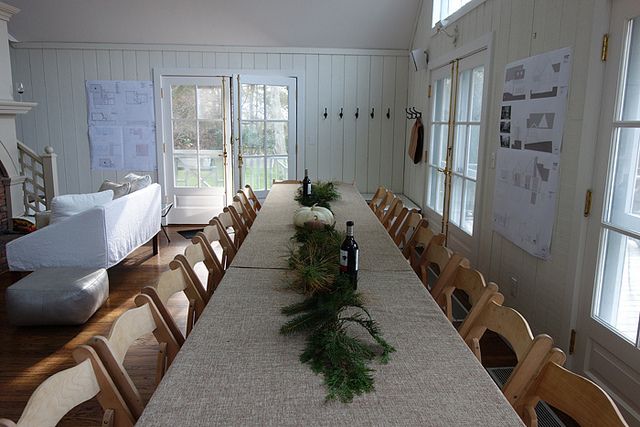 My husband Steve is very good at getting the table ready while I am finishing things up in the kitchen. He does “front of the house” while I take care of the back. He gathered these greens from the property, where there are about 200 trees, many of them evergreens. We put the drawings on the wall so our guests could take a look at the plans. 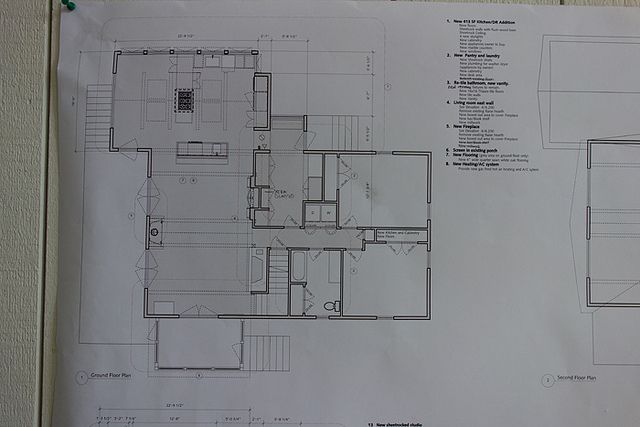 Here are the plans for the new kitchen and entertaining space. 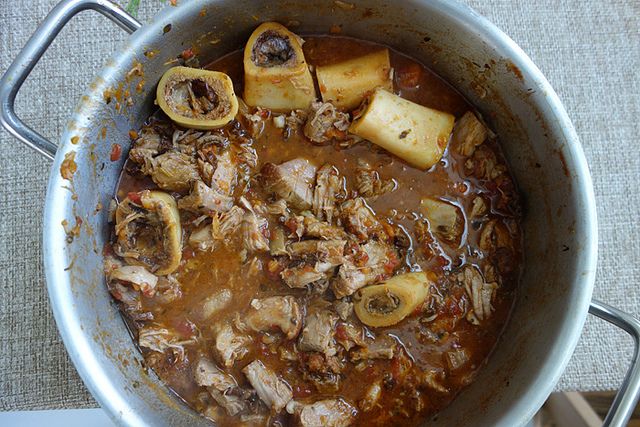 I had ten pieces of Osso Buco left over from a shoot, which I stashed in the freezer for a few weeks. I turned it into a ragout, which stretched it enough to feed twenty adults, along with some other items. 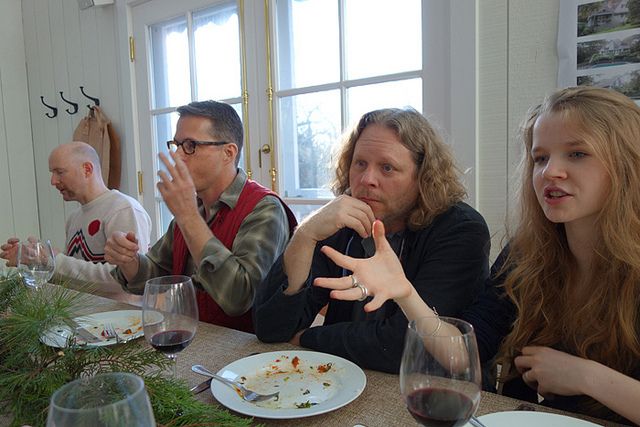 People were so involved in conversation, we decided to plate dessert (which was an apple crisp made with apples I had picked a few months earlier), so as not to break the mood. That’s Christopher Baker, accomplished photographer, who I have worked with for years, and his lovely daughter Hannah. 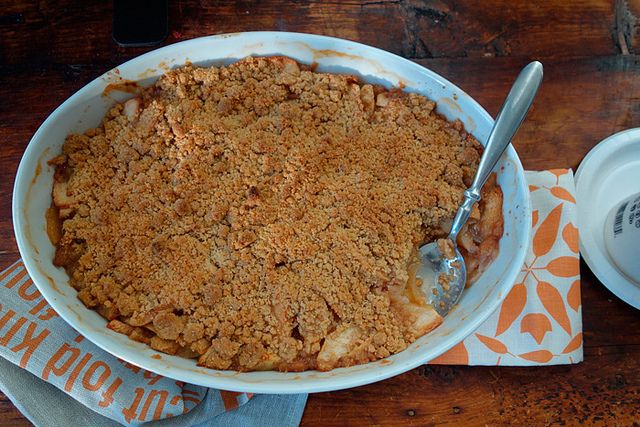 I brought a gratin dish out from the city for the crisp. The dishtowels were a house gift from Claudia Fleming. 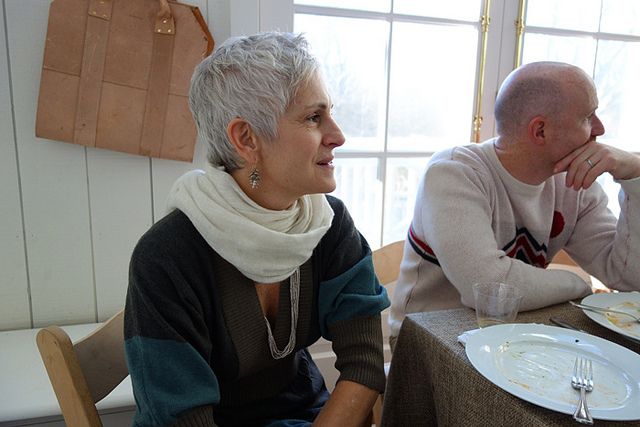 No, I’m not afraid to cook for chefs. Here’s Claudia Fleming, renowned pastry chef and owner of North Fork Table and Inn and Lee Hanson of Minetta Tavern. Notice that they have cleaned their plates. Everyone likes a day off.

The success of this gathering proved once again that you don’t need a fancy new kitchen to make some really good food, and that a good party is really about the people. We all got to bask in the beautiful light, and I could start to imagine what it will be like when we finish the renovation, when we’ll have everyone back again.

I’ll be chronicling my journey throughout the renovation process here on Food52. Next time, micro-planning the kitchen storage and choosing a contractor. 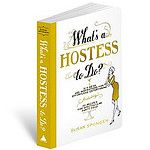 In Susan's new book What’s a Hostess to Do?, she explains everything you need to know to host an elegant party effortlessly and with elegance.

Her tips -- all 313 of them -- are time-saving (“Ten Jobs You Can Delegate”), money-saving (“In Praise of Cheap Wine”), and face-saving (“How to Word a Last-Minute Invite”), with 121 recipes for spectacular party food to boot.

susanspungen.com
I am a food stylist for print and film, a cookbook author, recipe developer, culinary consultant, and dedicated home cook.

Maria July 17, 2013
Will be following your progress. I love to see kitchen renovations and apply some of the ideas to mine. I am sure it will be an amazing kitchen.

Kathy G. April 22, 2013
Love this piece. We're house shopping now in Sonoma and though I have a fairly good sized kitchen in our current place, I'm looking to get my perfect (or almost) working inenvironment.

Alexandra H. March 28, 2013
So excited for this series!  Susan, I love your cookbook "Recipes" so much that I bought two copies: one for the kitchen and one for bedtime reading. Even pre-ordered your new book before the cover was even available!  Adored reading about your food styling in "Julie & Julia" and "The Help," too.  Huge fan of your work!.  All the best, and thrilled to see you on Food52!!

ChefJune March 28, 2013
I wish you loads of fun with your reno, Susan. My kitchen is 7 x 14. 7+ years ago I upgraded my appliances and generally spiffed up the space. Not much one can do to a 7 x 14 inch kitchen when there are no walls you can blow out, but I do love it.

dymnyno March 27, 2013
Love this! I lived in a 1200 sq ft farmhouse when we bought our vineyard 20 years ago(now on the Nat'l Historic Reg) and I cant' believe how many wine dinners and lunches I hosted on the porch while cooking out of my tiny kitchen on a 1946 O Keefe & Merrit. Now that I have a much larger house and kitchen(Architectual Digest June 2005) I still remember with great nostalgia the "good ole days"!

AntoniaJames March 27, 2013
Can't wait to see future articles. Seriously. This is going to be good. (Having been the prime on my own renovation, albeit without any build-out, I'm acutely interested.) ;o)