Congratulations to Kitchen Butterfly, who won this week's contest for Your Best Swordfish Recipe with Suya Swordfish. 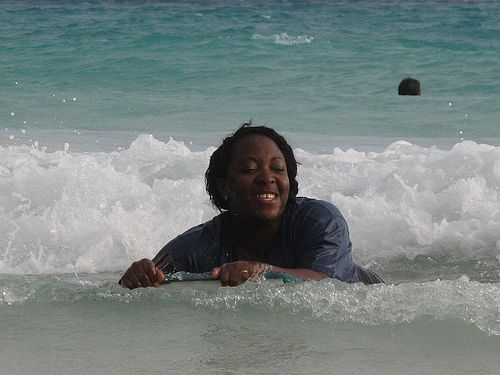 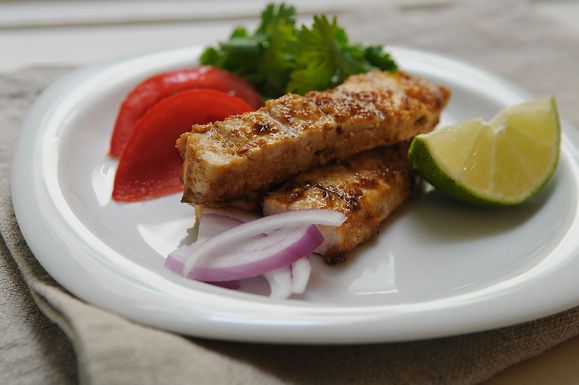 Describe an early food experience that has influenced the way you think about food and/or cooking.
I hated food till I was 9 and that was hell for my mom and late dad who did everything they could do to get me to eat. As for me, I was fine, hiding behind curtains eating sugar cubes for sustenance! Then we went abroad (from Nigeria) to Scotland on holiday in the summer I was nine and I discovered the joy of 'happy meals' at Wimpy, a fast food chain. I ate a kid's meal, without threat and my dad in shock offered me a second -- he had never seen me eat with so much ease. After the second round, I cried from being full. I haven't looked back since! Though my mom cooked well, it was my dad who broke the bounds of tradition and inspired me to cook - he had lived as a bachelor in the UK in the 50s and taught himself to become kitchen-smart. I admire his style -- he focused on the quality of food and rarely used any seasonings save for salt and pepper. He understood timings, experimented a lot and everything he made was delicious, especially his lemon sole with onions, which we always had for Sunday breakfast. He was also big on gadgets and making things at home -- grinding his own plantain flour, making popcorn in his popcorn maker and using the food processor to the limit. I find too that I am in constant pursuit of everything homemade & experimental.

What's your least favorite food?
Though I love celeriac, I HATE celery with a passion -- the thought of it in anything turns me off.

What is the best thing you've made so far this year?
Hands down my Blackberry Cheesecake & Jelly Verrines -- I made 6 small pots and ate them ALL by myself. Something about the combination of jelly, cooled whipped cream, softened blackberries and a crisp almond topping with a squeeze of lime juice reeked and tasted of heaven on earth!

This happened days after after I got married in 2002: I tried to make a traditional Nigerian soup, which involves using fresh ground prawn heads to thicken the soup. Unknown to me, I was meant to pass the ground prawn mixture through a sieve and discard the shards. Well, I didn't know....so I didn't, dumping the entire mix into the pot. Well, my poor husband, only so soon after tying the knot had to have his love tested! Though he ate it without complaint, as did I, the texture was all wrong and I learnt my lesson -- get Mama to hold your hand before embarking on such a venture.

What is your idea of comfort food?
Turkish yogurt (similar to Greek yogurt) with jam and flaked almonds, layered in a small deep bowl and eaten with a long dessert spoon, especially when assembled and left to 'set' overnight -- the yogurt firms up, attains a super creamy and smooth texture and the jam liquefies in the whey from the yogurt softening and causing the almonds too to soften. I love it because it requires no cooking and tastes great with whatever jam you choose. Lately, I've had it with everything from ginger jam to peach & orange, ancho strawberry preserves a l'Amanda and even a Gaia melon & citrus marmalade!

Apron or no apron?
Definitely no apron -- no time for that :-)

What's your favorite food-related scene in a movie?
It'll have to be when Dick Van Dyke makes a breakfast of eggs and sausages for his kids in Chitty Chitty Bang Bang. I loved the contraption of a food conveyor belt/cooker and have never forgotten that scene!

If you could make a show-stopping dinner for one person, living or dead, who would it be?
It would have to be Paul Newman, something about his amazing blue eyes and blonde hair!

You prefer to cook: a. alone, b. with others, c. it depends on your mood
Cook alone -- I like to be in charge of the success/failure. If it fails, then I know what element(s) to vary the next time but if someone else is involved, it makes it hard to judge what went wrong, when and why!

When it comes to tidying up, you usually: a. clean as you cook, b. do all the dishes once you've finished cooking, c. leave the kitchen a shambles for your spouse/roommate/kids to clean.
Do all three, depending on how tired I am and how late I'm cooking!

Kitchen B. July 29, 2010
Thanks EVERYONE for your lovely comments - I've been beaming for the last week solid just to be in the finals and then to win - now I can rest :-)...till September at least! Thank you

shayma July 29, 2010
congratulations, KB! so pleased for you. xx shayma

gingerroot July 28, 2010
Congratulations Kitchen Butterfly! This looks so delicious - something about the combination of peanut butter (homemade, no less), citrus and chilis - I cannot wait to try it.

dymnyno July 28, 2010
Congratulations!! You always come up with a delicious and unique recipe. I love your stories about your recipes.

WinnieAb July 28, 2010
Yay KB! I've loved so many of your recipes and I'm so happy to see you as the winner here! This recipes looks really delicious and I cannot wait to try it!

Teri July 28, 2010
I want to eat breakfast at your house! Congratulations and I can't wait to make homemade peanut butter.

Kitchen B. July 29, 2010
Teri, you're welcome anytime, as long as you bring some Yuzu and promise to make your Shiso pickles for us!

mrslarkin July 28, 2010
Congrats, KB! Lovely recipe. And Chitty is one of our all-time fav movies, too!

MrsWheelbarrow July 28, 2010
I made this dish last weekend and everyone raved! Thank you for this, and all your brilliant recipes. Congratulations!

Kitchen B. July 29, 2010
I'm glad it worked out well - there's always nervous tension (for me anyhow) when my recipes get tested and they are liked! Thank you

aargersi July 28, 2010
Big congratulations! A really wonderful recipe. LOVE the stories and even more the photo of you in the surf - you look so happy!!!

Kitchen B. July 29, 2010
I was happy - it was on a holiday/family reunion in Barbados in March - my first time ever to the Carribean and to see such gorgeous seascapes plus the heat!

Sagegreen July 28, 2010
What a great history! An amazing story. Btw I love yogurt the same way.