Strawberry Juice and a Champagne Cocktail

Today: A juice for the little ones -- and a cocktail for you. Everyone wins. 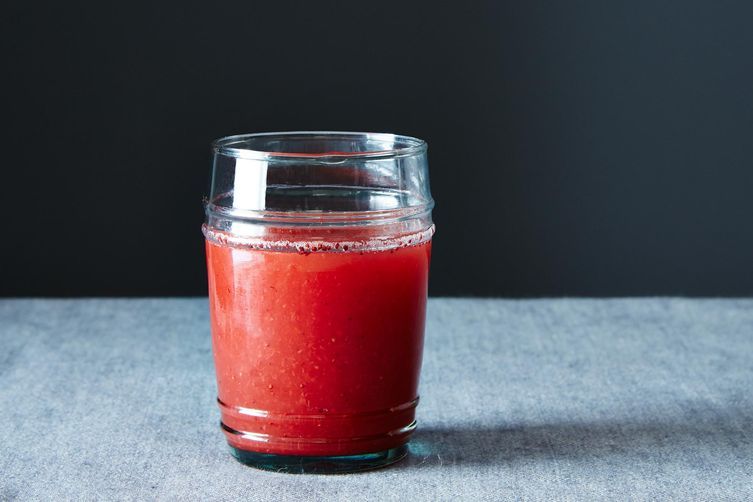 A few weeks ago, my husband, Jonathan, and I went to Italy for vacation. We spent a few days in Rome, followed by a few days on the coast of Maremma, in the southern part of Tuscany. Most days it was warm and sunny, with just a hint of a breeze to keep us from breaking a sweat; artichokes and chicory were in full swing, and tomatoes were just coming into season; the poppies were in full, glorious bloom. I know what you're thinking: what a drag, right?

More: A tomato sauce just like Nonna's that you can make even when tomatoes aren't in season.

It was the first time we'd left Clara for more than a long weekend. I was nervous, but I shouldn't have been. She spent ten days being spoiled rotten by her grandmother and babysitter, and we were able to Skype with her pretty much every other day. I think she was hardly aware we were gone. 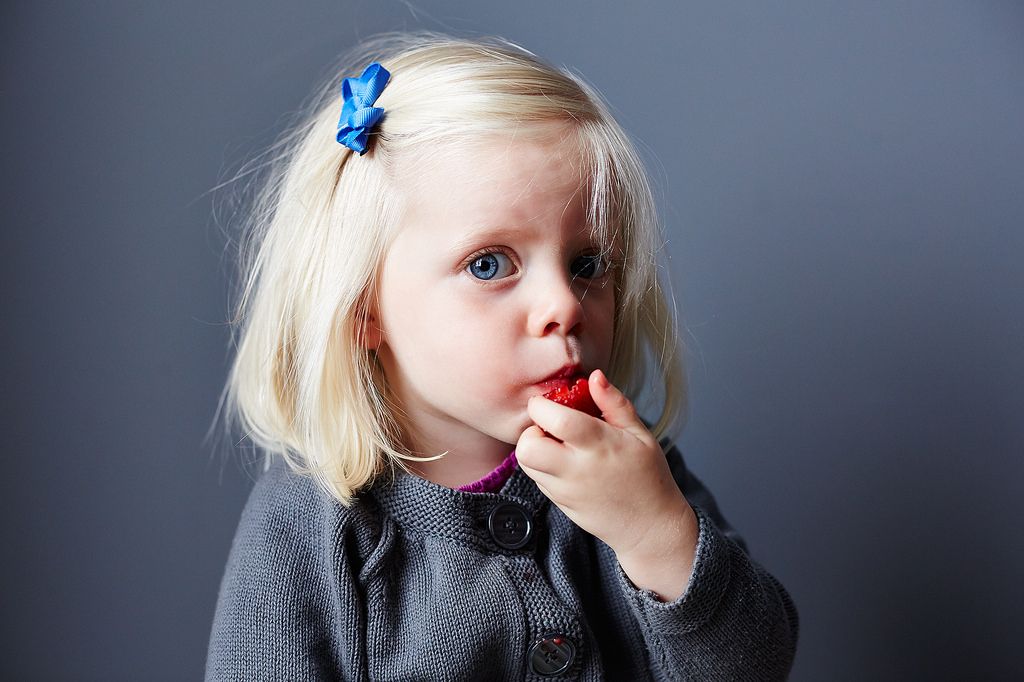 We were keenly aware. We ate delicious food, drank great wine, met lots of nice people (including an old school friend of mine who just happened to be staying at the same small hotel in Tuscany -- small world!), and I got to brush up on my Italian, which I hadn't spoken in nearly eight years. (I was a little arruginita.)

It was Jonathan's first time in Italy, and within 24 hours he admitted the trip had already far surpassed his expectations. Besides all of the food and wine, we had some fantastic cocktails. Our favorite was the Rossini, a frothy aperitivo of strawberry puree and Champagne that we both ordered every night before dinner at the hotel in Tuscany. We sipped them overlooking the sea with the sun beginning to set, a little plate of salty hors d'oeuvre by our side. 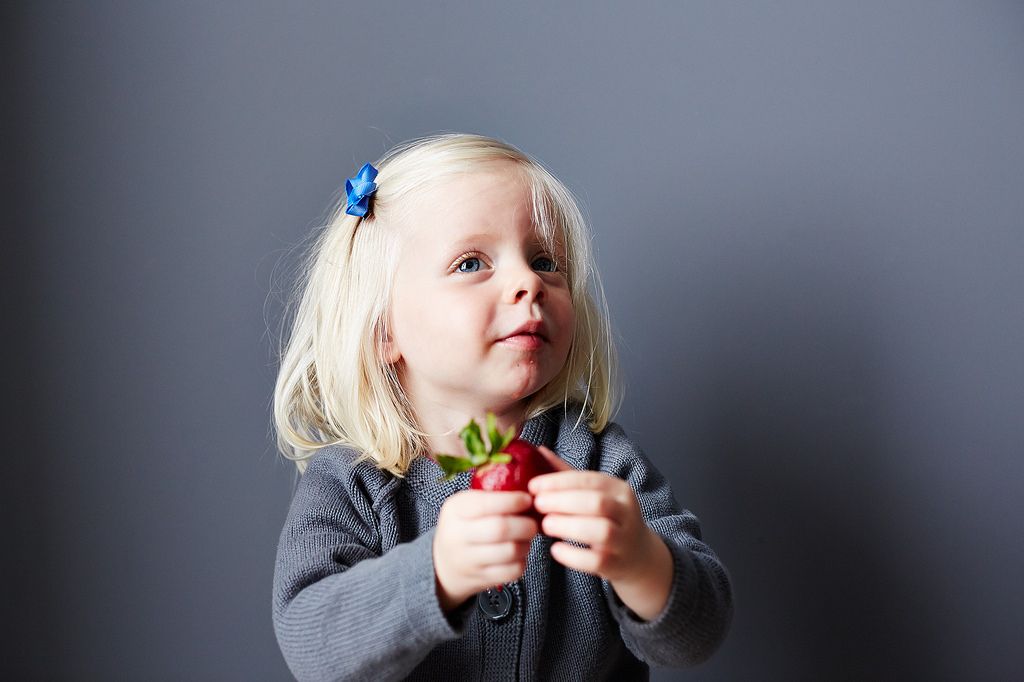 I promised Jonathan I would make Rossinis when we were back home to remind him of Italy, and last weekend, our suitcases long unpacked and our sunburns a distant memory, I did. And so Clara wouldn't feel left out, I made her a toddler version, the strawberry puree cut with a little water instead of Champagne to make what I'm calling strawberry juice. Someday, when she's old enough, we'll take her to the Tuscan coast for the real deal. 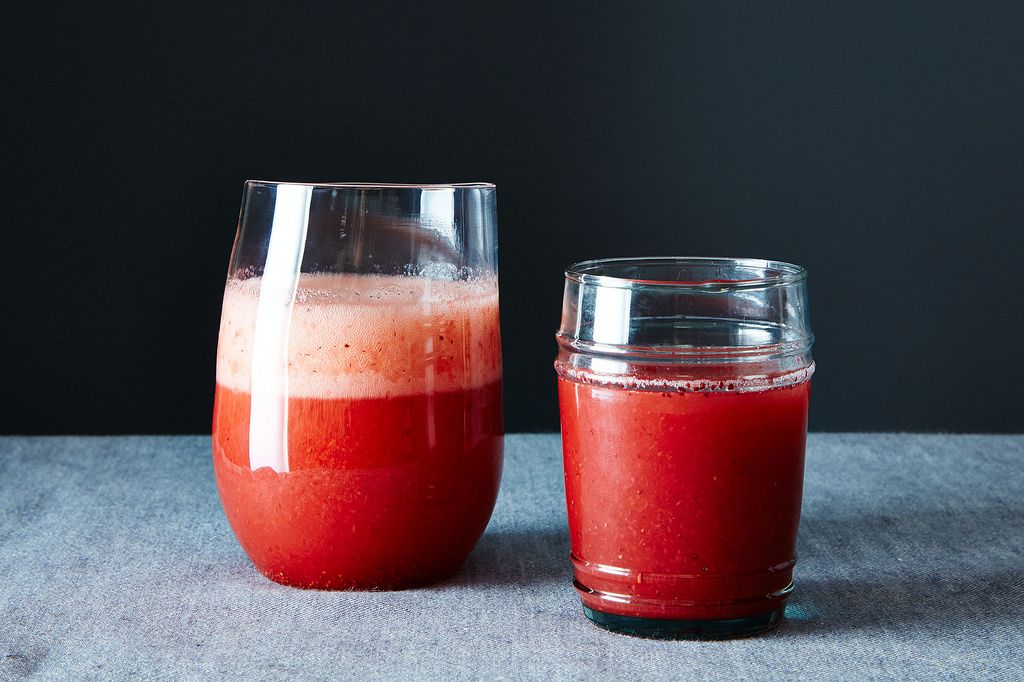 Strawberry Juice and a Champagne Cocktail

Makes about 2 cups strawberry puree, enough for 8 to 10 drinks

1 quart ripe strawberries, rinsed and hulled
1/4 cup superfine sugar (plus more, depending on the sweetness of your berries)
Squeeze of lemon juice
Champagne (optional -- and not a really expensive bottle, but no swill!)

Amit July 14, 2014
I wonder how cutting the strawberry puree with sparkling mineral water would have worked. (I love drinks with a little fizz, but rarely drink alcohol.) Sounds like something to try one day!

ChefJune June 17, 2014
Darn, Merrill! You've got my mouth watering. Can't wait for the tri-stars to come to the market to try this with the best of the best! Did you use sparkling water for Clara's mocktail?

ATG117 June 10, 2014
Would love more details on your trip, specifically where you stayed and what you ate.

Merrill S. June 17, 2014
Where do I start? We stayed at an AirBnB flat in the Monti neighborhood in Rome, which I would do again in a heartbeat -- great to have a home base and to be able to cook some of the stuff we picked up at the market. We stayed on an island near Grosseto in Tuscany, so we were right on the water. Lots of great seafood (including the best fritto misto I've ever had) there, and of course we had to have bistecca Chianina one night, which we ate in a cute little place in a beautiful hilltop town called Pitigliano.

Sara June 10, 2014
Please don't use Champagne in a fruit cocktail. Cava or Prosecco will do just fine. No reason to ever mix real Champagne. And if you mean sparkling wine, please make that distinction in your recipe. To do otherwise is just sloppy.

Merrill S. June 10, 2014
I don't mean sparkling wine, I mean Champagne. This is how the drink was made where I had it, and this is what I'm recommending. And I find your condescending tone inappropriate.

Sara June 12, 2014
Rossinis are traditionally made with Prosecco. I guarantee your hotel didn't use Champagne. This post plus the Jell-O shots made with Champagne post that appeared on your site today make it apparent to me that you don't know what you're writing about when it comes to wine. Either that, or you're especially enthusiastic about your readers wasting their money. I would implore you to hire a wine professional, at least to consult on your wine-related posts.

Merrill S. June 12, 2014
I asked specifically if they used Prosecco or Champagne, and they told me it was Champagne. I chose to believe them. If you don't approve of our content, there are plenty of other places you can go -- this is a supportive and constructive community, and we welcome all who approach it as such.

Allyn June 10, 2014
Strawberries should go in everything this time of year. And champagne in everything all year long. Looks delicious!