Congratulations to JSCooks, who won this week's contest for Your Best Recipe for Plums with her Late Summer Plum Cake. 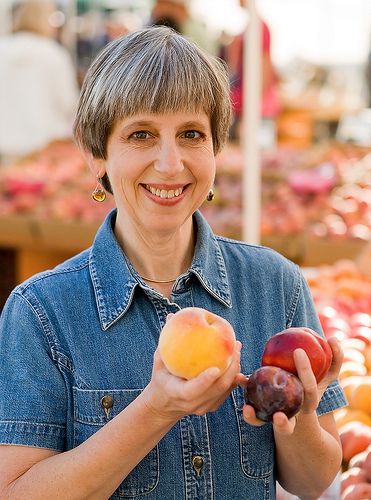 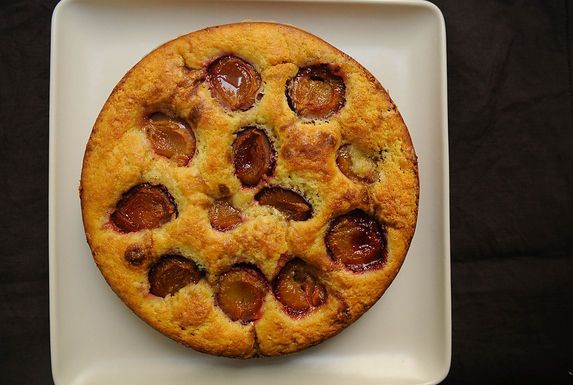 Describe an early food experience that has influenced the way you think about food and/or cooking.
I think more than anything my cooking was influenced by sitting in front of the television, glued to Julia Child. She always appeared to be having fun, and she was never fearful of making a mistake. I loved to "play along" at home with The French Chef cookbook. Because I was young and fearless, one of my earliest baking attempts was a towering fruit- and cream-filled meringue Vacherin.

What's your least favorite food?
Blue cheese. I've tried, but I just can't do it.

What is the best thing you've made so far this year?
Sour cherry pie. Can't get enough of it.

Describe your most spectacular kitchen disaster.
As a child, I once roped my friend Emily into baking something from the Peanuts cookbook (I think it was Franklin's Jam Tarts). Not only were they a terrible flop, but I also managed to set the kitchen curtains on fire. My mother was not amused.

What is your idea of comfort food?
Pasta with whatever vegetables are in season and a poached egg.

Apron or no apron?
Usually no apron.

What's your favorite food-related scene in a movie?
The scene from When Harry Met Sally -- “I’ll have what she’s having" -- is classic. I also loved Like Water For Chocolate. And there are some great food scenes in Fried Green Tomatoes.

If you could make a show-stopping dinner for one person, living or dead, who would it be?
My wife.

You prefer to cook: a. alone, b. with others, c. it depends on your mood
I love the idea of cooking with others, but I think they generally prefer if I cook alone. You could say I'm not good at relinquishing control. Unless we're cooking and gabbing together, but each working on our own dish. That can work.

When it comes to tidying up, you usually: a. clean as you cook, b. do all the dishes once you've finished cooking, c. leave the kitchen a shambles for your spouse/roommate/kids to clean.
Clean as I cook. Always. I don't mind making a mess but it doesn't stick around for long.

JSCooks August 19, 2010
Thank you all so much for your kind comments. I have already submitted a recipe in the corn contest, and this won't be the last you'll hear from me. Winning is very motivating! :) I'm sorry now that I didn't get started earlier. Though I have frequently looked to food52 for ideas, I hadn't realized what a wonderfully creative, talented, and embracing community has grown here. I'm honored to be a part of it, and I look forward to trying out and reviewing your recipes and contributing more of my own. In fact, I have a stack of macarons recipes sitting on my desk, and egg whites in the fridge, just waiting to find time to give them a go!

Lizthechef August 19, 2010
So looking forward to trying out your lovely recipe - congrats!

Kitchen B. August 18, 2010
Congratulations. It does look like the perfect cake to accompany the last of the summer wine. Well done

Sagegreen August 18, 2010
Congratulations on the win! So glad you are joining this community with your recipes.

AntoniaJames August 18, 2010
I second that! And like the others, am hoping you'll post more recipes, and join in discussions, testing, etc. of others' submissions. ;o)

nannydeb August 18, 2010
Congratulations! Looking forward to more of your recipes!

lapadia August 18, 2010
Congratulations on the win and thanks for sharing your fabulous cookbook recipes with Food52! PS – I can relate to sitting in front of the television watching Julia Child and “playing along”….totally!!

aargersi August 18, 2010
Congratulations on a great win! This CRACKS me up :
I love the idea of cooking with others, but I think they generally prefer if I cook alone.

dymnyno August 18, 2010
Congratulations! I have been checking on all your accomplishments ....hope we see a lot more of your recipes!

thirschfeld August 18, 2010
Congatulations. I have not made this cake yet but I will really soon because it looks wonderful.