Congratulations to thirschfeld, who won this week's contest for Your Best Meatballs with his Meatballs Emilia-Romagna with Pasta Sheets. 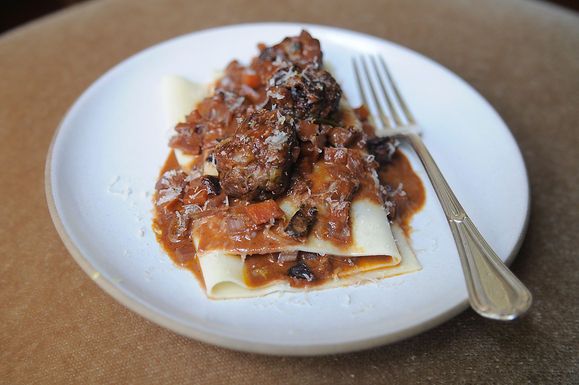 Describe an early food experience that has influenced the way you think about food and/or cooking.
Oh so many, but I think one of my earliest memories is of my grandmother's German scrapple, fried rabbit and Sunday dinners. We didn't get to eat at her house a whole lot cause they lived two hours away but I remember when we did.
What's your least favorite food?
I like them separate but do not serve me mint and chocolate together. Somehow my brain has never been able to overcome this combination.
What is the best thing you've made so far this year?
I think the best thing I have made this year is a toss up between barley noodles with Swiss chard or the peach and wild black raspberry skillet pie that I made while on a weekend getaway. I have been trying to perfect my noodle-making skills by adding different grains to the noodles. The biggest surprise was barley flour. It adds so much to the flavor and texture I can't imagine going back to making pasta with just white flour. The skillet pie was a test of resourcefulness, meaning no pie pan, no rolling pin except for a whisky bottle and someone ate half the peaches but luckily I found ripe wild black raspberries. It was fun to make as well as delicious to eat.
Describe your most spectacular kitchen disaster.
When I turned on the heat lamps at the restaurant where I was working on Mother's Day morning. The chef had put all the fondant decorations and decorated cakes underneath them. In my defense, it was the first thing we always did on arrival and the switch for the heat lamps was not near the heat lamps, a wall divided the two. Fortunately the chef blamed himself for putting them there but I still really felt awful.
What is your idea of comfort food?
Collard greens with home cured ham hocks and black skillet cornbread, made with yellow cornmeal and bacon drippings.
Apron or no apron?
No apron until I was looking for clothes to wear for a casual occasion and could not find anything without stains.  So apron.
What's your favorite food-related scene in a movie?
The scene where Ratatouille names all the kitchen stations and his excitement at the sense of urgency. I felt the same the first night I worked in a restaurant.
If you could make a show-stopping dinner for one person, living or dead, who would it be?
Of course someone like Ducasse,  Keller, or Jean-Louis Palladin but in reality the most fulfilling would be to someday cook my daughters' favorite meals for their kids, my grandchildren.

You prefer to cook: a. alone, b. with others, c. it depends on your mood
I like the idea of cooking with others and do pretty well as long as it is not my wife. And we both get that, she is the bartender/ sommelier. And a really good one at that.
When it comes to tidying up, you usually: a. clean as you cook, b. do all the dishes once you've finished cooking, c. leave the kitchen a shambles for your spouse/roommate/kids to clean
Most definitely I clean as I cook.

Jennifer A. August 29, 2010
another wonderful recipe - congratulations! (and lucky us)

Kitchen B. August 26, 2010
Thirschfeld - WELL DONE. I love your in-depth knowledge of food - your understanding and the absolutely gorgeous recipes which are the result.

luvcookbooks August 26, 2010
have you tried chocolate mint, the herb?

lastnightsdinner August 25, 2010
Congratulations on yet another well-deserved win.

healthierkitchen August 25, 2010
Congratulations on the recognition for a great recipe!

Victoria C. August 25, 2010
This really looks delicious, and I am going to try it very soon.

Lately, I have been making an adaptation of my Nanny's meatballs with toasted pine nuts and plumped currants added. 1 egg to a pound of meat (preferably beef and pork), a small amount of dried breadcrumbs, and lots of freshly grated parmesan cheese - browned and turned in a plain tomato sauce and served with pasta with cheese and black pepper - no tomatoes.

I also make a meatball goulash dish from Delia Smith (she's English and has a website). It is really delicious, and sometimes I make it with ground dark-meat chicken (my idea). You might like it.

thirschfeld August 25, 2010
Sounds great. I use my roosters for ground chicken and it is the darkest dark meat I have ever seen. It actually looks like beef and is so rich. I am really looking forward to making Coc au Vin this fall.

AntoniaJames August 25, 2010
I'm totally with you on the barley flour . . . since I started keeping it on hand, always, for use in bread, I've also used it almost exclusively when making a roux. It's a great touch, adding just the tiniest whisper of that nice, nutty flavor. Your win is so well deserved. I'm thrilled for you! ;o)

thirschfeld August 25, 2010
Thank you so much and the barley flour great isn't it?

MyCommunalTable August 25, 2010
Congratulations... fabulous recipe... now I am waiting for the barley noodle recipe. I can just imagine...mmmm.

nannydeb August 25, 2010
Congratulations! Another great recipe that I've added to my list to try!

Sagegreen August 25, 2010
Really enjoy hearing more and more about your food and family history! Congrats on this win.

drbabs August 25, 2010
You are so inspring. Congratualtions, and thank you for sharing your skills, talent and wonderful recipes with us.

monkeymom August 25, 2010
Big congrats! Hope you will give us a lesson in noodle making soon. I just ordered some buckwheat flour from Anson Mills and would like to try making soba, but I'm afraid!

thirschfeld August 25, 2010
I make a buckwheat noodle but I am not sure how traditional it is. I will say I make them a lot because they are really good.

mrslarkin August 25, 2010
Congratulations thirschfeld on the win. It's a beautiful recipe! Is the skillet pie recipe here?

thirschfeld August 25, 2010
thanks and it will be posted soon

aargersi August 25, 2010
Congratulations! All of your recipes are great, this on included of COURSE!!!!

thirschfeld August 25, 2010
thanks aargersi, the salsa asada looks mighty tasty by the way.