Congratulations to Oui, Chef, who won this week's contest for Your Best Red Pepper Recipe with his Roasted Red Pepper Soup with Corn and Cilantro. 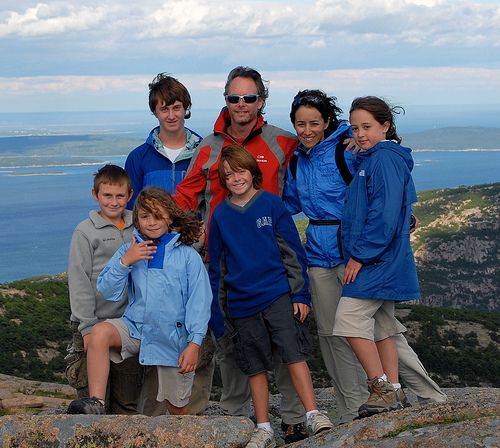 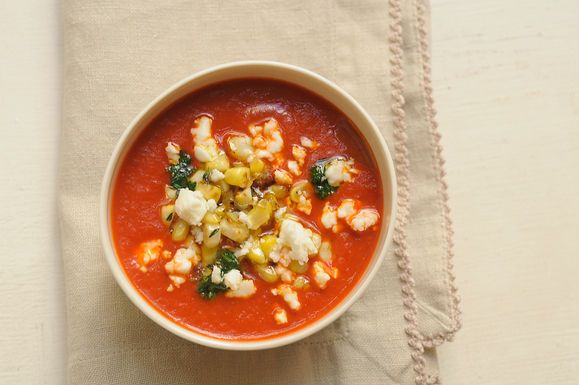 Describe an early food experience that has influenced the way you think about food and/or cooking.
Sunday dinners at my Italian Grandmother's house were a seemingly endless feast of great food, love and laughter, all orchestrated and executed by my tireless Nana.  I have very fond memories of watching her at work, and occasionally being recruited to her side to help.  These days I find I'm happiest when the house is full of family and friends, all milling about and having fun, while I'm up to my ears in it, just like she used to be.

What's your least favorite food?
I was about to say "fishy" fish, but I think I have to go with Andouillette sausage.  Andouillette, not to be confused with Andouille (which was the mistake I made in ordering one in the first place), is a French sausage stuffed with tripe, or pig chitterlings (intestine and colon).   A Brit I know likes to call it "arse sausage", and that moniker pretty well captures the horrific smell and taste of the stuff.

What is the best thing you've made so far this year?
I recently made two quiches for a friend's 50th birthday brunch that were really outstanding.  They were Thomas Keller's Florentine and Lorraine quiches from the "Bouchon" cookbook, and I must say that they were among the best things I've ever put in my mouth.

Describe your most spectacular kitchen disaster.
Years ago, when I first started to cook "seriously" I made a shrimp and pasta dish for a visiting friend who I knew to be a gourmand.  I had pulled the recipe from a popular cooking magazine, and there was a typo in it which called for 1 cup of flour (as opposed to 1 teaspoon, or tablespoon which I suspect is what was really required) to thicken the sauce.  It seemed odd to me at the time, but I didn't yet have the kitchen confidence to trust my instinct and question the recipe, so I added the full cup of flour to the dish.  Ugh....I can still see the look on my friends' face as he graciously choked down that truly inedible meal.

What is your idea of comfort food?
Almost anything that is cooked low and slow qualifies for me, whether it be a confit or cassoulet, braised short ribs or osso bucco, or a delicious tagine.

Apron or no apron?
Generally no apron.

What's your favorite food-related scene in a movie?
The prep and consumption of the final meal in "Big Night".

If you could make a show-stopping dinner for one person, living or dead, who would it be?
I can't decide on just one, it would have to be both Amanda and Merrill.

You prefer to cook: a. alone, b. with others, c. it depends on your mood
There are somedays when I like the peace of cooking alone, but I'm usually in the mood for company.

When it comes to tidying up, you usually: a. clean as you cook, b. do all the dishes once you've finished cooking, c. leave the kitchen a shambles for your spouse/roommate/kids to clean.
My wife will almost certainly raise an eyebrow of disbelief if she gets to read this, but I am a clean as I cook kind of guy.  It was one of the first lessons drilled into me when I studied at LCB, and one that I am most thankful for.  It is hard for me to cook well, or efficiently, if my "station" is not clean and organized.

Bevi September 16, 2010
Re: Big Night - the prep of the timpano was a movie highlight for me as well.

WinnieAb September 15, 2010
OMG your family is adorable. Congrats... I'm so excited to make this soup!

TheWimpyVegetarian September 15, 2010
Congrats Steve!! Wonderful recipe and a great way to kick off this new year of cooking. Love the photos of you and your family - esp the little purse and what looks to be a stunning little shawl.

drbabs September 15, 2010
Congratulations, Oui Chef! I'm so happy to get to know you better, and your recipe is just wonderful. Great photos--you have a beautiful family!

Oui, C. September 15, 2010
WOW....what a terrific surprise! Thanks all for your kind words, and for your tolerance of my occasionally unusual fashion choices. Looking forward to another great year with you all here at Food52! Cheers - S

lastnightsdinner September 15, 2010
Way to start Book 2 off with a bang - congrats!

Kelsey B. September 15, 2010
Congrats! I loved your q&a and the pictures of your family are wonderful!

aargersi September 15, 2010
Congrats on a great recipe! Love the Q&A and appreciate the word of warning on arse sausage - a mistake NOT to make ... you ARE a well dressed fella aren't you!!!

lapadia September 15, 2010
Congrats Oui,Chef! Thanks for sharing your wonder family photos too!

thirschfeld September 15, 2010
Love the photos. The clothing accessories are what makes the man. You are allowed to travel all you want as long as you bring back recipes like this.

MyCommunalTable September 15, 2010
Congrats on the win and thank you for sharing your family... Bravo!

MrsWheelbarrow September 15, 2010
Wonderful to see you featured, Steve, and to see all your adorable kids. The handbag - not sure it's your color. :)