From Babylon to Brooklyn: The History of Rooftop Gardens

As soon as it’s warm enough to wander outside on the streets of New York, I like to look up and see if I can spot trees -- the city’s tell-tale sign of a roof garden. In nearly every city across the country, you can find restaurants that utilize their roof space for growing produce: Roberta’s in Brooklyn, New York; The Bachelor Farmer in Minneapolis, Minnesota; Post & Beam in Los Angeles, California; and Park 75 in Atlanta, Georgia. But this rooftop garden craze isn’t merely a trend (even though it does seem we're living its golden age). Our collective love of nature in the clouds has existed since the beginning of recorded time. 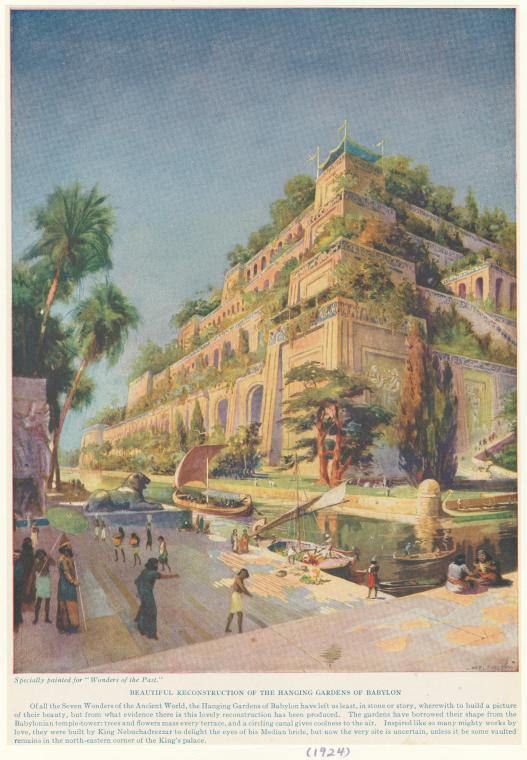 Reconstruction of the Hanging Gardens of Babylon, 1924, from the Collection of the New York Public Library

The first known roof gardens are thought to be the ziggurats of ancient Mesopotamia, the most famous of which is the Hanging Gardens of Babylon, one of the Seven Wonders of the Ancient World. Usually located in the courtyards of major cities, these enormous pyramid towers had stairways that spiraled along their outer edges, with trees on the staircase landings to provide some respite from the harsh desert sun. Our only proof of their existence are classical writings based on oral histories; no archeological proof has ever been found (although, recently a British academic claimed to have identified the true location of the Hanging Gardens of Babylon.) 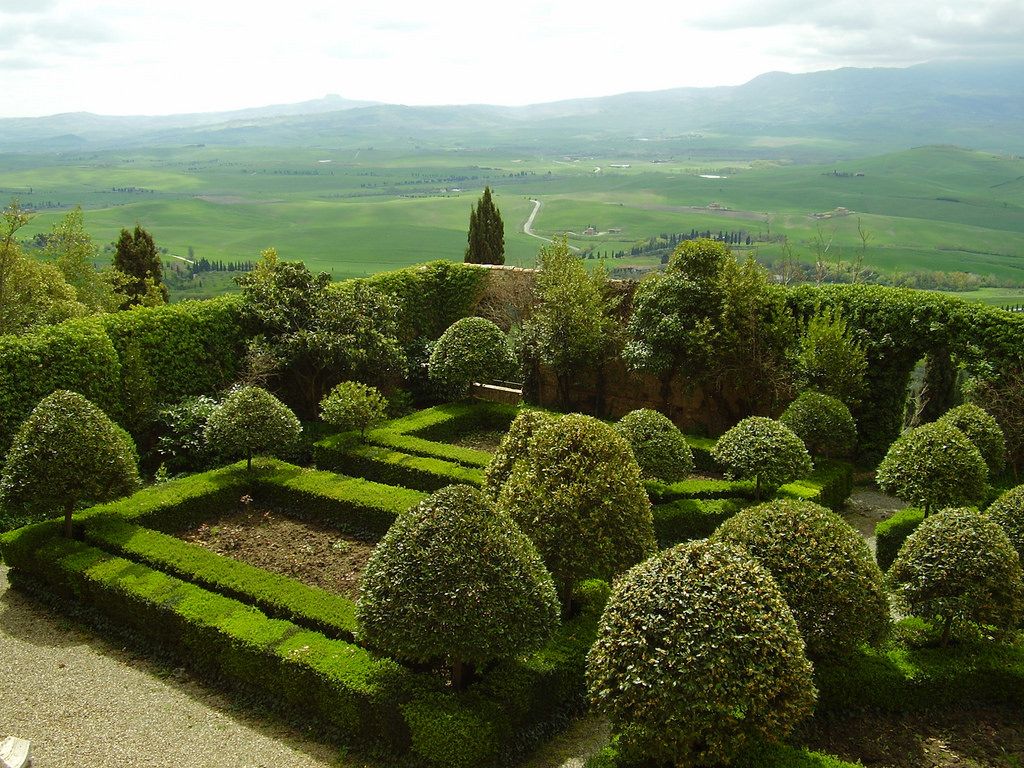 Piccolomini Gardens, by Entoaggie09, is licensed under CC BY 2.5

Fast forward to The Renaissance, when Italians were crazy for their gardens -- the more symmetrical and ordered in design, the better. The oldest and best preserved roof garden is from this time, located in the town of Pienza in Sienna, Italy. Pienza was the birthplace of Aeneas Silvius Piccolomini, who had a palace built for himself there when he later became Pope Pius. On the roof, a formal garden was erected for him to hold audiences. The entire town of Pienza -- now a UNESCO World Heritage site -- and its palace have remained virtually untouched since the 15th century. (If you’re lucky enough to find yourself in Tuscany, put this on your must-see list!) 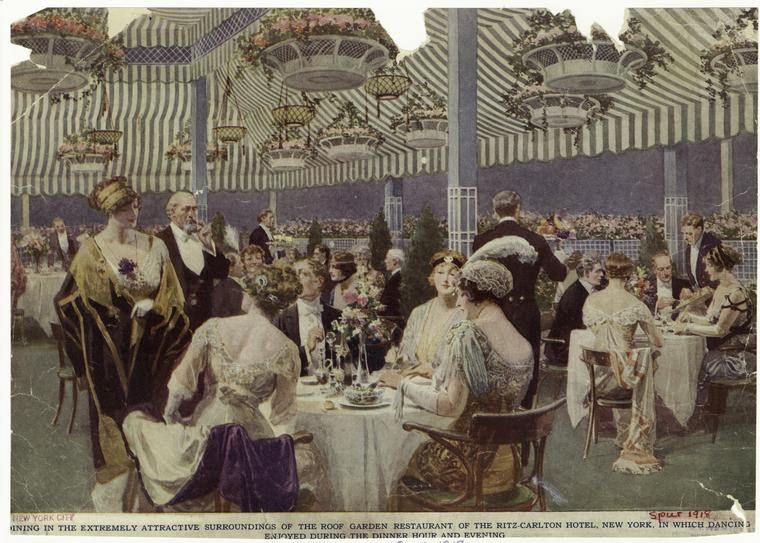 Dining on the roof garden restaurant at the Ritz-Carlton Hotel, New York City, 1918, from the Collection of the New York Public Library

In more modern times, roof gardens developed into social hubs for the public. Prior to the advent of air conditioning in the 19th century, they were a choice way to cool off in the evenings. Although the Casino Theater was the first theater to be completely electrified when it opened in 1882, the biggest draw wasn’t the bright lights but rather the roof garden theater. It quickly became the city’s “in” destination on hot summer nights, and set off a roof garden craze in Manhattan and nationwide. At a time when most theaters were forced to close down for the summer due to the heat, these open-air theaters were a way to keep businesses going. Summer lineups included singers, dog acts, magicians, and dancers, who were able to hold their own amid a raucous audience of eating and drinking people -- and the noise of city streets. 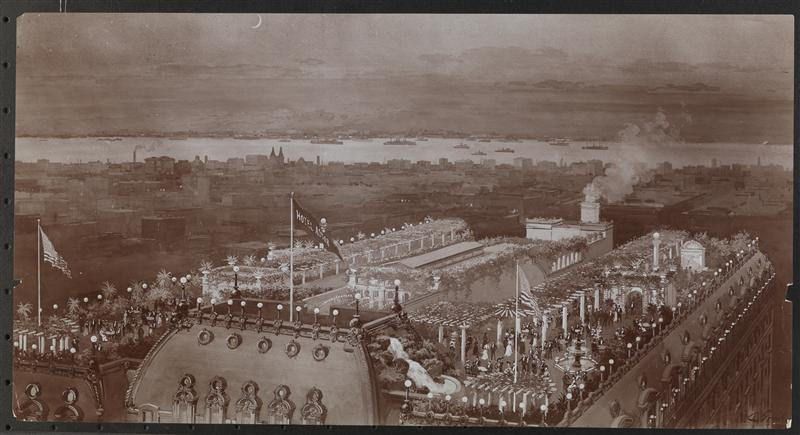 Drawing of the Hotel Astor roof garden, 1905, from the Collection of the Museum of the City of New York

The roof garden craze that followed was a classic show of New York City one-upmanship, each building trying to outdo the others. There was the massive rooftop garden at Madison Square Garden (the reason that we still call it “The Garden”), which spanned the entire block between Madison and Fourth Avenue and was large enough to accommodate 4,000 people. Then there was the Paradise Roof Garden, which featured a village setting complete with a windmill, pond, waterfall, two cows, and a milkmaid. And finally the Hotel Astor, which outdid them all with 20,000 feet of roof garden space that included a 1,000-foot-long tree-lined promenade. The New York Times reported on the Astor in 1920, saying that “a unique feature of the restaurant is the gabled-glass roof over which flows a miniature Niagara.” 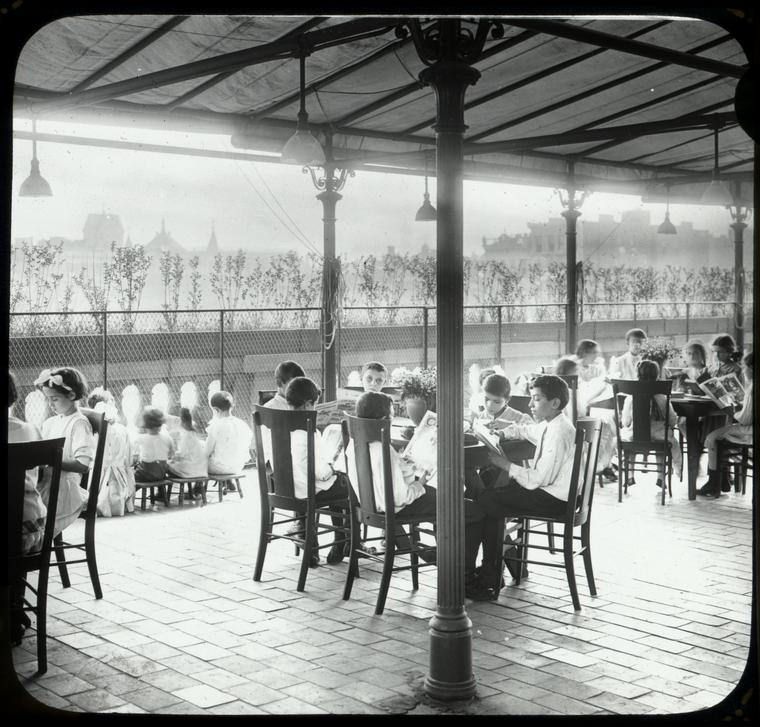 Hamilton Fish, children reading on roof garden, 1875, from the Collection of the New York Public Library

Wealthy New Yorkers adopted the trend for their own homes and, soon, a penthouse wasn’t complete until it had a roof garden. But it wasn’t just those with deep pockets who looked to escape the heat by climbing up: New York City libraries soon established reading rooms on roofs. Then, as now, if you had access to a roof you were going to use it. The most recent trends in roof gardens are both ecological and practical: metropolitan restaurants growing their own ingredients, green roofs for stormwater management, and hydroponic roof gardens for small-scale urban agriculture.

In cities, we might not have a plot of land that we can call our own, but most of us do have a roof over our heads. Don't give up if gardening on your own roof isn't an option! For years, I lived in a Brooklyn apartment where I was denied roof access by the landlord, but I managed to convince a friend to let me share his roof space for an urban apiary. This spring and summer, take inspiration from the many intrepid rooftop gardeners who have come before us. If you have a hankering to escape the heat come July or even grow your own tomatoes, just look up.

Posie (. March 2, 2015
Love this! It's pretty amazing to be reminded of all the clever ways cities use their extra spaces.