If you like reading what Amanda feeds her kids, you'll love taking a look into what other people -- both in the food world and the world at large -- prepare for their own children (and occasionally their signifcant others and maybe even their pets). Prepare to be either resentful or appreciative of your own parents.

Today's lunch comes from Deb Perelman of Smitten Kitchen, who we wish would pack our lunch (even if she hates doing it). 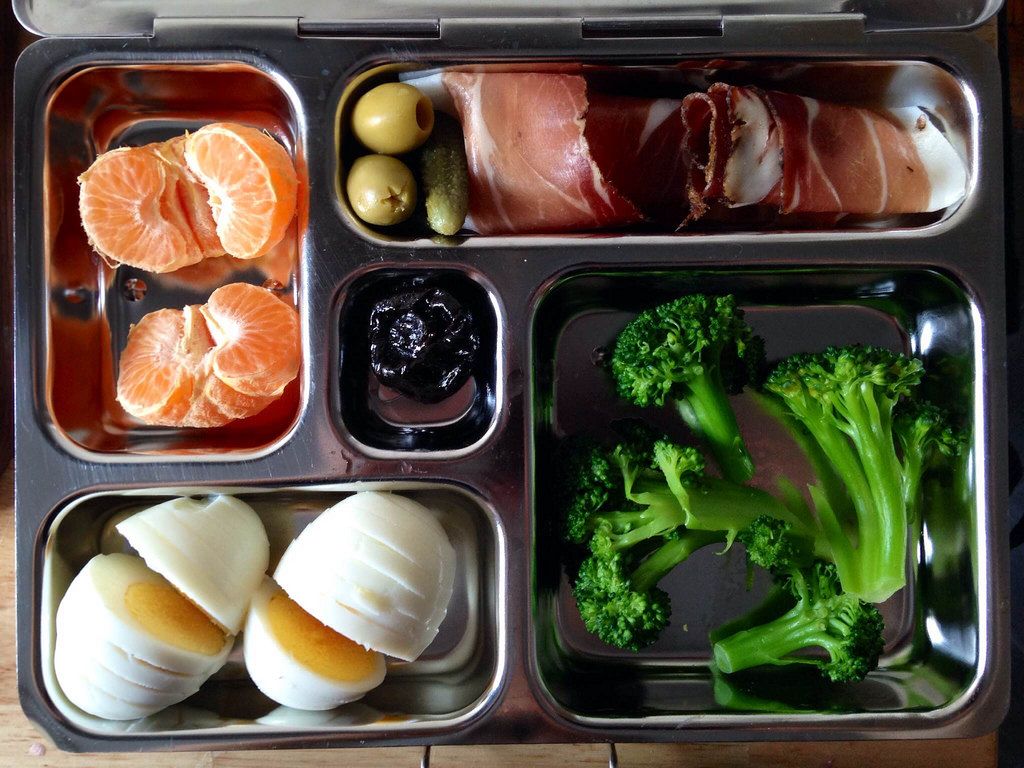 We cannot have a conversation about my son's lunch boxes without me coming clean from the outset: They are the bane of my existence. Not because he's a particularly terrible eater (he's...normal), or because he sends back everything uneaten (thank God, not very often), or because it doesn't give me pleasure to know that he ate five strawberries and four cucumber spears at lunchtime. Rather, I resent the bigger system: That school lunches aren't better (despite efforts), and that we're not making it a priority to normalize warm, balanced meals on real plates in deliberate, un-rushed meals—that these things aren't considered life skills. Also, I'm usually packing these lunch boxes at about 7:32 A.M. and the last thing I want to is a) be awake at all or b) smell steamed garlic-pork dumplings.

I don't do cute or fancy lunch boxes. I have a system—two vegetables, one fruit, one piece of dried fruit, and something savory—and I lack the inclination or creativity before my first cup of coffee to vary from this. The savory thing is usually the compromise; ideally it's something with protein—maybe leftover chicken or pasta—but it's equally likely to be a peanut butter and jelly or grilled cheese sandwich (no more than one a week is our agreement) or organic chicken nuggets from the frozen food aisle (ditto). To me, the primary benefit of packing his lunch box is that he'll eat two more vegetables and one more piece of fruit than he would ever put on his own cafeteria tray, mostly because I choose them exclusively from the narrow list of things he's shown willingness to eat. In case you were wondering if I negotiate with terrorists: always.

The other morning, he took great interest in my grumpy lunch box packing and insisted that I include olives (which he'd taken interest in for the first time the day before, because they were in a bowl next to a pitcher of Bloody Marys we'd set out for friends and I let him go "fishing" for them with a toothpick) and hard-boiled eggs (also a new interest, mostly because I introduced him to the egg slicer; had I realized this would be what piqued his interest, I'd have dug it out of useless kitchen gadgets purgatory years ago). He also chose the boiled broccoli; even I wouldn't subject a kid to cold, soggy florets while the other kids are eating three-color goldfish crackers and things with sprinkles. With two slices of prosciutto, a prune (we jokingly call him a mini-grandpa), and a clementine, I primarily took a photo because this 5-star Michelin lunch box cracked me up.

Frederique M. May 12, 2016
We have the Lap top lunches (now bentology) boxes and my daughter loves them. I find packing lunch right after supper when I have to put away the leftovers and do dishes anyway is WAY easier. Requires less discipline on my part. She'd go hungry if i had to count the times i press snooze in the morning if i packed it then! I always have healthy crackers, healthier deli meats, cheese, eggs, 5 types of fruit, baby tomatoes, cucumbers and baby carrots on hand at ALL times, so if she is not getting leftovers in her thermos, or a sandwich, she is getting an "antipasti" platter of deli meat and cheese or boiled eggs made into funny faces with crackers, fruit and cut up veggies (with hummus please!). I also always by that italian tomato pizza from the bakery so to have a switch up for the crackers. Fancy lunchables beat the plastic ones for her ANYTIME. I think that it IS all about having stuff on hand, and definately teaching the kids to eat what THEY want to eat, and not the junk others may have. Here in Canada they have banned chocolate, chips and other junk food from school lunches. Cannot have them at the cafeteria, cannot bring them from home! So kids don't really compare lunches, they all have healthy foods!

Colleen M. June 25, 2015
I got my niece a PlanetBox lunchbox before she started second grade. She is now in 7th grade and still brings it every day but the last Thursday of the month- their school party day. I have given her different magnets a few times so she has several sets. I also think I got her the yogurt container. Well worth the money and she even won an Earth Day award most eco friendly lunch!

Rachel S. April 21, 2015
I can't remember how old your son is (although I remember his debut on SK...I'm too old to try and figure out how long ago that was!), but the best day of my life was the day I passed the lunch making baton to the eaters of said lunches (they were in 2nd and 4th grades by the time I realized this was an option)! MY mornings improved dramatically. But I really like your system...might have to incorporate that.

Awads April 20, 2015
I tried making my son's lunches, but they usually came back half-eaten, or less than half. i decided he can NOT eat the school lunches just as well....maybe next year?

Deborah S. April 7, 2015
I LOVE our Planetbox Rover more than words...and also HATE packing lunches more than words. I wonder how many hours total in a school year I would save if I just sent my kid to school with $2.25 and didn't care about what went in his mouth. But that's not an option, so pack I must. Side note: you can order magnets (or make your own) to decorate the Rover. Helps keep it current with what your kiddos are interested in. We got the fairies set for my daughter, and my son drew some minecraft art which we uploaded to Planetbox's make-your-own magnet feature.

MrsButtons April 7, 2015
Just need to reiterate what a great investment the PlanetBox Rover is. The magnets are a great stocking stuffer!

Cynthia A. April 6, 2015
YES, LIKE jORJ, I'D LIKE TO KNOW WHERE I COULD FIND A LUNCH BOX WITH ALL THOSE NIFTY COMPARTMENTS

Lindsay-Jean H. April 7, 2015
It's from PlanetBox, scroll down a bit in the comments to see Deb Perelman's comment on it.

debjean April 6, 2015
This may be a silly question, but if you pack chicken nuggets, grilled cheese, or leftover pasta do you try to keep them warm until lunch? If so, how? and do they hold up?

Deb P. April 6, 2015
I wrap warm things in foil, and usually put pasta in a covered dish that fits in the largest container. However, I have no idea if they actually stay warm. No complaints, though... yet!

JORJ April 6, 2015
What's the container you are using? It's pretty awesome.

Lindsay-Jean H. April 7, 2015
It's from PlanetBox, if you scroll down a bit in the comments, you'll see Deb Perelman's comment on it.

Alyson T. April 6, 2015
Deb, your son looks like he has a wonderfully complex palate. Lucky him!

Deb P. April 6, 2015
Don't worry, given his druthers, he'd eat mostly pasta bambino (butter and parmesan), pizza and things with sprinkles, just like any other 5 year-old.

Deb P. April 5, 2015
The lunchbox is from PlanetBox. It's held up great so far, but it's definitely on the pricy side. We won't really know how good of an investment it was for a couple years, I think, but we hear they last a long time. The carrying case for it has held up less well; I can't seem to get it clean and think I'll just cave and replace it in the fall, begrudgingly.

hominniebits April 5, 2015
Look up bento boxes. There are so many different styles and lots of different websites that offer recipes and ideas. I love the images of peoples lunches. They are so creative!

Michelle M. April 5, 2015
A reasonably healthy lunch would be soooooo much easier to pack if all the other kids didn't have doritos, juice bags (and sometimes those blue or purple barrels), candy, packets of cookies or those sexy, albeit inedible plastic Lunchables. I can't compete with that, so we have a serious lunch 'situation'.

hominniebits April 5, 2015
Look up bento boxes. If you are creative, I bet all the other kids will throw their lunches away and beg their moms for what you pack for your kids!

Jessica C. April 5, 2015
Yeah, right. I'm all for healthy food, but I'm a realist. My kid's friend gave her the back of a lunchables pack "so I'd have the recipe to make lunchables." Someone is feeling deprived with her healthy lunches and pining for plastic tasting lunchables.

Deb P. April 6, 2015
I completely agree. My kid is only in K, so he hasn't much noticed other kid's lunches yet. But I know he will, and it will get so much harder. Then again, real life is like that too (i.e. me eating my muesli and yogurt right now while other people eat chocolate croissants, sigh).

Jess B. April 10, 2015
My daughter is in pre-k and came home saying that someone said something in her lunch box was icky. I can't remember what it was (maybe a prune? she loves them too!) but it prompted us to have a conversation about not worrying about other people's foods and to just pay attention to our own. She's never had an issue since. We also talk all the time about how real foods and water keep us healthy. It's def sunk in with her. She tells me water keeps her strong all the time. She still has a sweet tooth but she eats all her real meals with no problems!

Vanessa R. July 19, 2015
You never know! My daughter took (mostly) healthy packed lunches in elementary school, and for a while we had a problem with her not getting enough to eat because other kids were either begging for her food or downright helping themselves to it. The worst offender was a girl who brought nothing but chips and candy for lunch every day, so even kids can get tired of junk and want real food after a while.

Deb P. April 5, 2015
I know! I was shocked too. But there are no allergies in his class or grade or beyond. It's like the Twilight Zone!

Tracy M. May 2, 2015
My daughter's school allows peanut butter and they definitely have kids with food allergies. Not sure how they came to that decision, but it was a surprise when I found out.