5 Hudson Valley Towns That Won't Remind You of Brooklyn

The places to go to love the Hudson Valley for what it is—more than an arm's length from New York City. 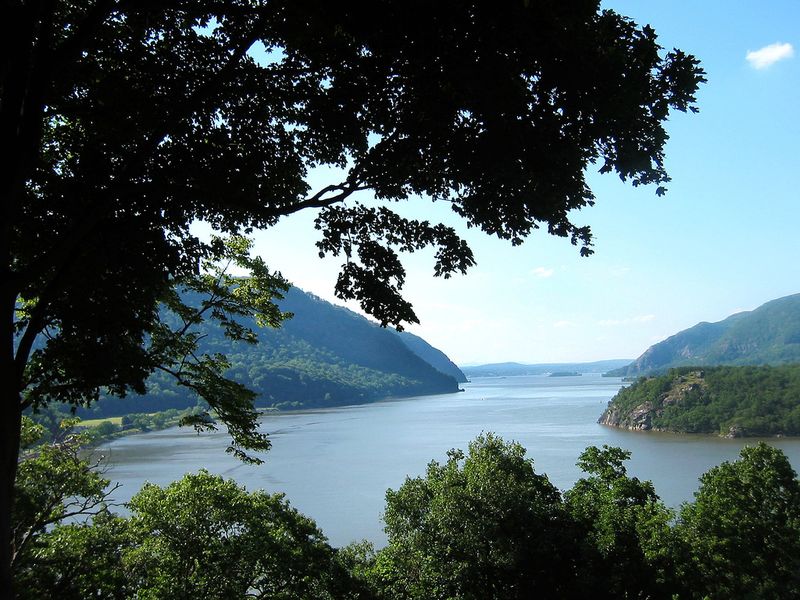 New Yorkers will give you any number of directions if you ask them how to get out of the city for a few days.

They’ll say to take the LIE all the way to Montauk on the tip of Long Island (perfectly acceptable), or to hop on New Jersey Transit for a trip to the Jersey shore (just fine), or to head to the Adirondacks and Finger Lakes to really get away from the urban (nice!). And, hopefully, some of them will say: the Hudson Valley, dang it. One of those people would be me, and the simple reason is that its attitude reminds me of home—if Indiana, where I'm from, had lumbering mountains, a sparkling river, and fewer fast food restaurants.

I know, I know—everyone’s squawking about how it’s an extension of Williamsburg, or giving you their recommendation for the most rustic home goods store in Hudson. But if you peel just off the main drag, you’ll find the places that make the area special and worth a little exploring. Here are the places I go to get more than an arm's length away from Brooklyn, organized by the time it takes to get there (in a car, from New York City):

One hour to: Bear Mountain State Park and Peekskill 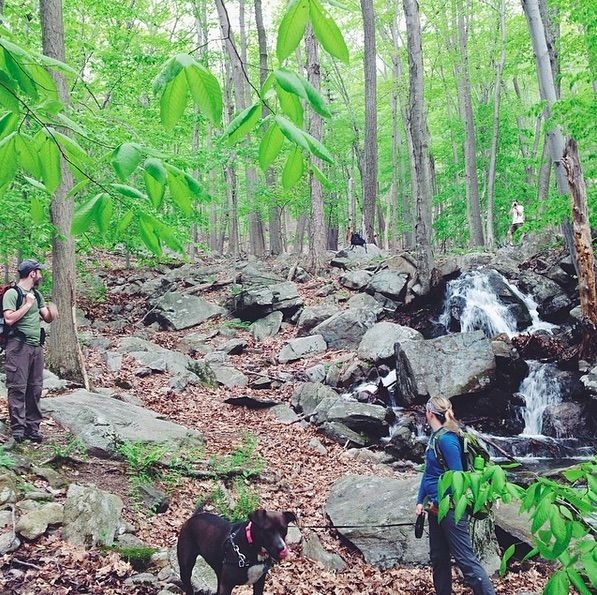 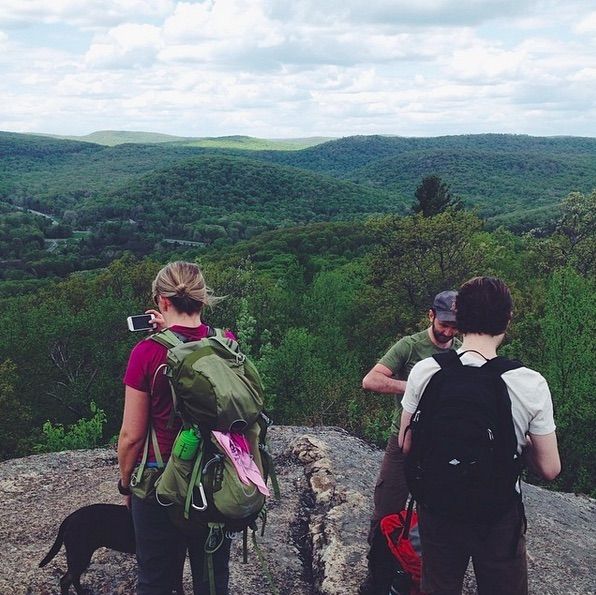 Eat: Stop at Birdsall House for comfort food. (Where else do you eat in Peekskill? I always just end up here.)

Drink: All the beers at Peekskill Brewery.

Do: The trails in Bear Mountain-Harriman State Parks aren't the most rigorous you'll encounter, but the views of the Hudson are unrivaled—and you can camp, too! The parks have multiple entry-points and are in close proximity to Peekskill Brewery (important—seriously). You can supplement your need for the outdoors with time in Blue Mountain Reservation, too.

One hour and a half to: Beacon 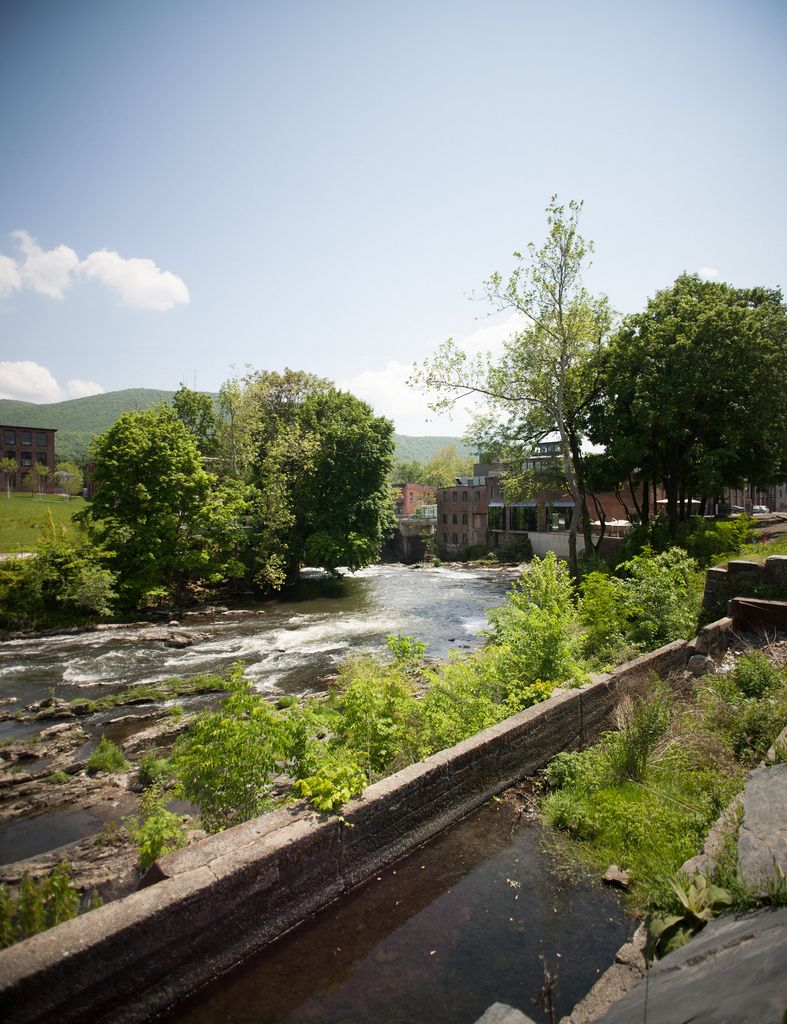 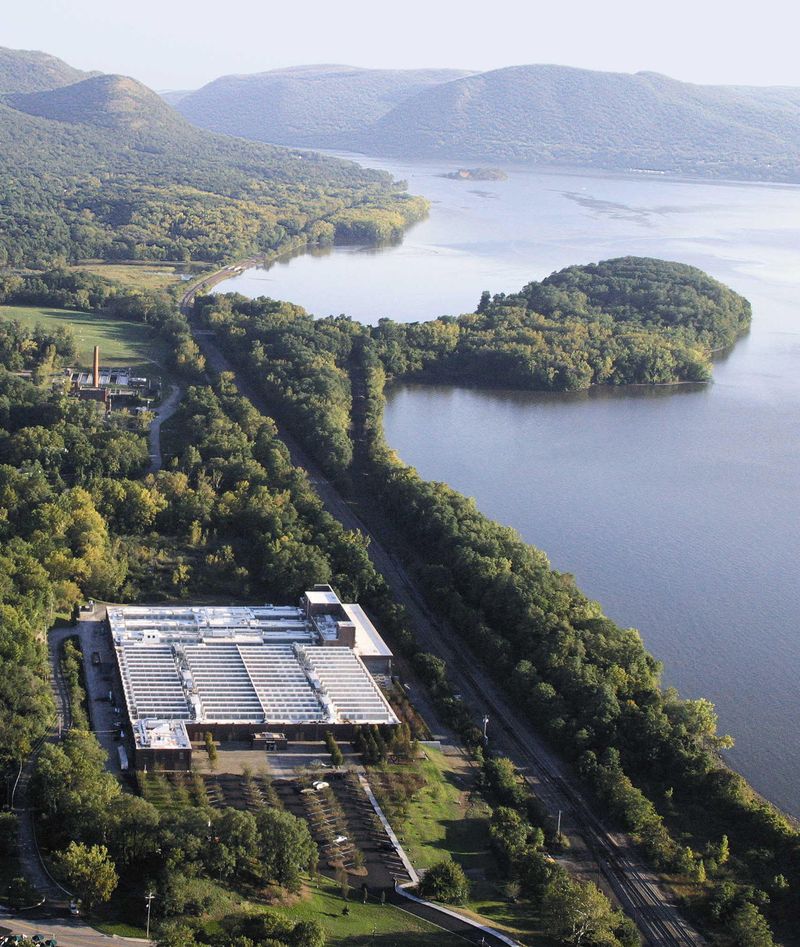 Eat: Homespun Foods, with its fresh sandwiches and hippie vibe, reminds me of a cafe in a really granola college town (and I mean that in the best way). Or order a burger at Max's on Main, a lively pub with a good beer list.

Drink: The Hop borders a little on the cutesy—"craft beer and artisanal fare"—but their tap selection is pretty hard to argue with. The Dogwood is also worthy of a stop-off for cocktails.

Do: Hike up Mt. Beacon, or take the backroads out to Fishkill Farms and pick apples. Get your fill of art by visiting Dia: Beacon and Storm King Art Center. If you are staying over for a night, Mt. Beacon Bed and Breakfast is cozy, affordable, and serves delicious food. And even if you don't have a car, everything's mostly within walking distance from the MetroNorth station. 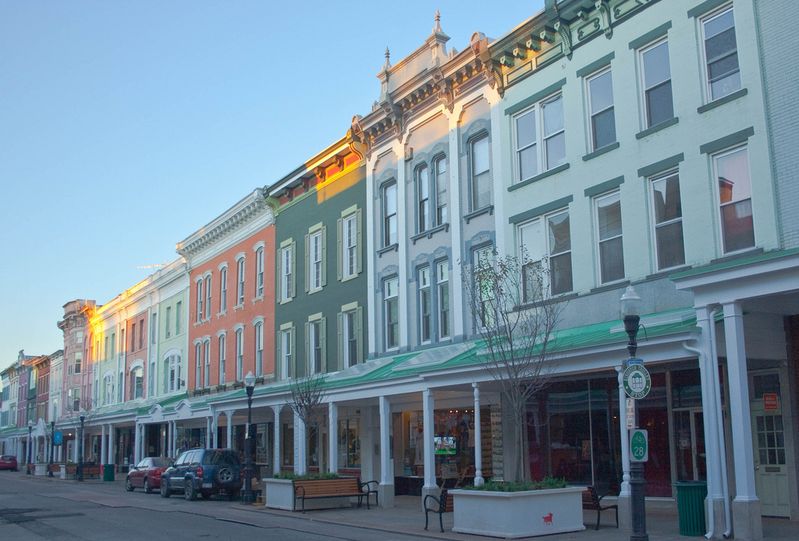 Wall Street in the Kingston-Stockade district of Kingston, New York.

Eat: Slurp oysters on the back deck at Boitson's. Pick up sausages at Fleischer's (you can even take butchery classes, but it's not twee, I promise!). Walk along the Rondout and eat pancakes at Dolce. Stock up on wine at Kingston Wine Co.

Drink: Do not not order a local Keegan Ales Mother's Milk Stout wherever you are. Stockade Tavern serves the best cocktails in the Hudson Valley.

Do: Kingston is a little scrappy, and that's the way I like it. But it's also historic, covered in stone houses and old churches—some dating from the 17th century. Visit the Hudson River Maritime Museum for a little tributary history. Do some antiquing. You're also close to the Dutchess Couty Fairgrounds, which always has something curious going on—plus one of my favorite kitchen stores, Warren Cutlery.

Two and a half hours to: Germantown 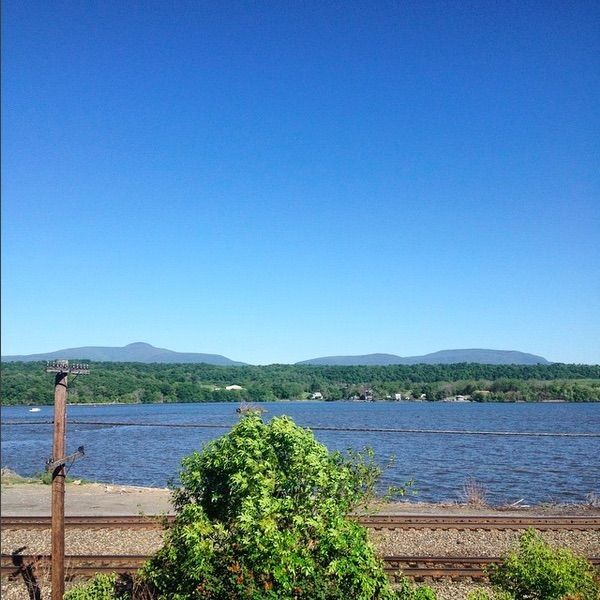 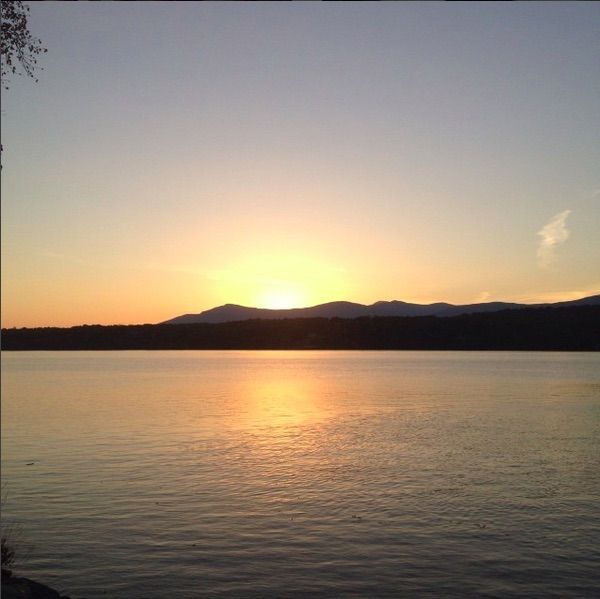 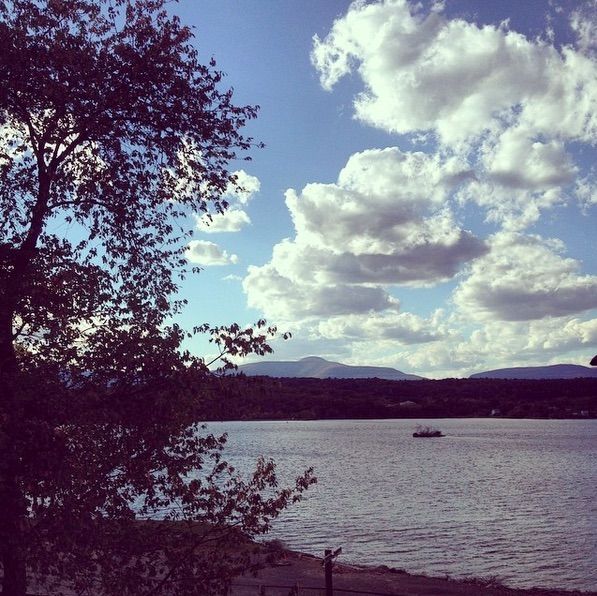 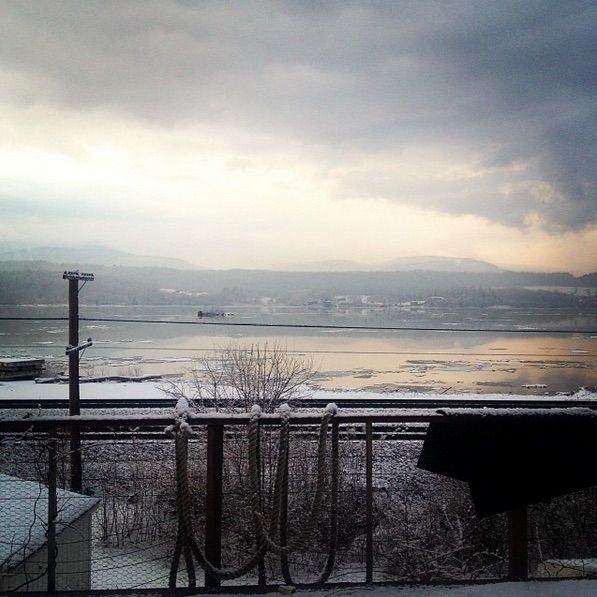 All four seasons from Cheviot Point in Germantown.

Eat: Grab a sandwich and provisions at Otto's Market. Stop by Montgomery Place Orchards for every type of fruit (and honey, and apple cider, and so many pumpkins, once they're here). Pull over for a burrito in neighboring Red Hook's Bubby's Burritos, or sit down for a hearty bowl of pasta at Mercato.

Drink: Get a beer at Gaskin's. Tool over to Tivoli for a few more options—like margaritas at Santa Fe, which are sizable and strong. 20 minutes down the road finds you in Philmont, at the low-key, beer-filled Main Street Public House (affectionately called Philmont Pub).

Do: Good weather means a picnic at Cheviot Point (pictured above). In the summer, head to the Spiegeltent on Bard College's campus for cabaret. Take to the Tivoli Bays during fall. And in the winter, hit Ro-Lin Lanes to bowl a few games. (You can even get your own ball drilled!) 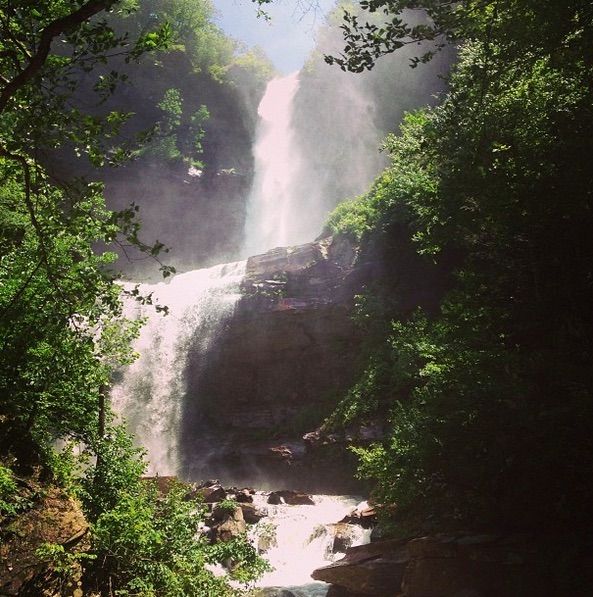 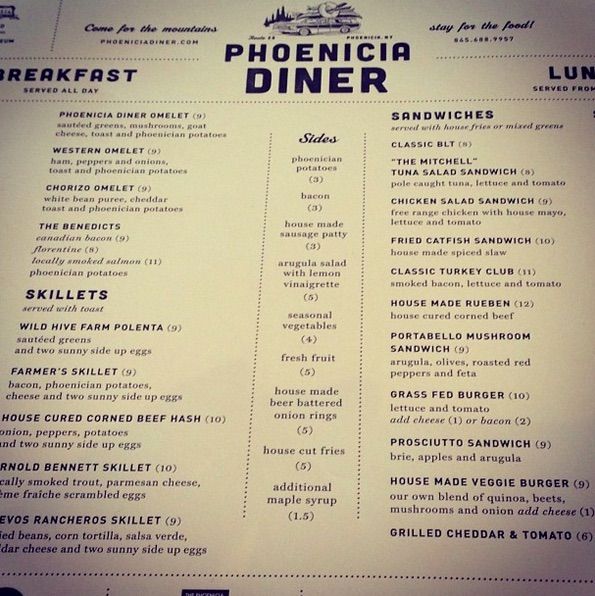 Left: Kaaterskill Falls; and right: the menu at Phoenicia Diner.

Eat: Hit Phoenicia Diner before the trails and pizza at Brio's is casual and easy.

Drink: For a beer, head to Peekamoose Tavern, or order a martini at Ricciardella's.

Do: Hike Kaaterskill Falls. Go skiing nearby, or tube along on Esopus Creek. Meet a few goats at the nearby Woodstock Farm Sanctuary. Breathe in the quiet.

There are so many incredible towns that dot the landscape of this lush region, and this is just my little slice of it. I want to know: Where do you like to go in the Hudson Valley? Tell me what I'm missing in the comments below!

Donamaya May 18, 2021
Bear mountain,Kingston and Phoenicia are on the west coast of the Hudson...

Tania P. February 1, 2016
Keegan Ales Beer ROCKS!!!! sorry for anyone's loss of one of the top award winning craft beers in the country!

Linda October 22, 2015
I grew up in Newburgh New York, just across the Hudson from Beacon. In those days there was no bridge; we had to take a ferry to get to the other side. Back then Newburgh was a magical place to grow up. Small town values, beautiful neighborhoods, great schools and easy access to all that New York City had to offer. I'm very happy living in Southern California but I do miss the beauty of the Hudson Valley, especially in the fall.

lunule October 22, 2015
Who knew the Hudson Valley was so controversial! ; )
Thanks for the list Samantha and everyone's additional suggestions. Your piece is so timely because we are new to the area and planning a fall getaway. We were thinking of Rhinebeck but some of the places that you mentioned also sound great. Keep the suggestions coming!

gardeningal September 23, 2015
We would always go "upstate" from L.I. for hiking. But to visit Kingston, you have to go to THE steakhouse: Rudigans. We found it by accident one year...it's been a while since we've been there. Hope it's still nice.

Linda C. September 23, 2015
Deborah, I know how you feel. I live in Florida and it has been ruined by people flocking here to enjoy the way life "use to be"

Deborah September 23, 2015
I'd tell you about the amazing place I live in the Hudson Valley, but then Brooklynites might start coming here in droves, and while that might be good for the economy temporarily, in the longer term it drives up prices of real estate and at local stores for locals, driving out the longtime local businesses (a beloved cafe in my village just closed for this very reason). It means more traffic on roads where we used to joke that the only traffic jams were caused by slow tractors or cow crossings. It means weekenders buying homes that once were owned by families who sent their children to our public school.

Deborah September 23, 2015
All that being said, we're pretty awesome, and when visitors respect that we're an actual community, not just a playground, we love you and appreciate you. We have a film festival in a 1920s era theater, an outdoor dance venue, a nearby sculpture park, several excellent restaurants and bars, a brewery, family farms, places to buy local food, and a strong sense of community.

Cipriana C. September 7, 2015
I'm sorry but, the restaurants listed for Kingston are obscure! I live there and have never even heard of them. Like, what about Dallas, Broadway Lights, any Guido Establishment, Tony's (or any decent pizza spot), Mickey's...?

Jack September 6, 2015
I'm with Amy Daidone on this one. This article, like almost every other in these tres hip blogs, is 100% Brooklynite clickbait. Almost every establishment you mention is founded run by Brooklyn gentrifiers with the express purpose of luring up monied Brooklynites for an "authentic" Hudson Valley experience. I also enjoyed the wary reference to Kingston's "scrappy"-ness. For those of you not fluent in Brooklyn gentrifier euphemisms, scrappy means "black." I liked Janis Borgueta's comment about the City of Newburgh. Sorry to break the news Janis, but Newburgh is likely a bit to "scrappy" for the author's taste.

Suzanne B. September 6, 2015
Another really neat place to visit in Saugerties is The Catskill Animal Sanctuary.

Andy N. September 6, 2015
Phoenicia Diner is a scam. Big city bullshit. Far from an authentic Catskills experience. Take it from a native.

btglenn September 6, 2015
Why no mention of the great Storm King Sculpture Museum south of Newburgh. Its rolling hillsides contain wonderful sculptures and also has a picnic site for those who prepare their own outdoor feasts. There is also an indoor museum for smaller works.

Amy D. September 5, 2015
The Woodstock Farm Animal Sanctuary has recently moved to High Falls, which is about 30 minutes South of Woodstock. In fact today is opening day for them there

Janis B. September 5, 2015
Totally forgetting to include the City of Newburgh. A great place to view the Hudson River, tour George Washington's Headquarters and more. We have some pretty amazing restaurants in town that are way more amazing than those on the waterfront. Try Cafe Macchiato, The Wherehouse, and El Solar to name a few. After lunch and a beer at the Newburgh Brewery head out to the apple orchards and pick apples this fall. All sorts of local cider is available too. Yes, you left out the City of Newburgh. We are only 65 miles north of NYC and nothing to be missed.

shannon September 4, 2015
Just outside of Phoenicia is a cute place that never disappoints. Catskill Rose has the best food that we never miss going to when we are in the area. Why does it seem like the places mentioned are always mentioned? Go forth and explore!

Homer &. September 4, 2015
If you're headed to Phoenicia, stop by and say hi to us at Mystery Spot Antiques on Main Street! (You can find us by the 14-foot tall statue of Davy Crockett out front). We've got seven rooms of antiques, records, vintage clothing and plenty of oddities to entertain the kids.

Sarah September 4, 2015
We have a home in Phoenicia, and some of our favorites include dinner at Tavern 214, amazing pizza at Brio's, brunch at Zephyr in Pine Hill [about 11 miles down the road], and a sandwich to go made by Margaret at The Phoenicia Deli [hint - get the roast beef that is made in-house]!

Marybeth M. September 4, 2015
Worth noting that two establishments mentioned above have been closed for some time. Sweet Sue's and Woodstock Farm Sanctuary. (Phoenicia). But absolutely still worth a visit to our town!

Samantha W. September 4, 2015
Thanks for spotting that about Sweet Sue's -- it's been a while since I've been back. Sad to hear about it closing.

Samantha W. September 4, 2015
And I'd love to know your favorite places in Phoenicia if they weren't mentioned! It's such a wonderful, calming place.