The Ultimate Guide to Pairing Beer with its Proper Glassware

When it comes to beer, the glass can matter just as much as what's in it. 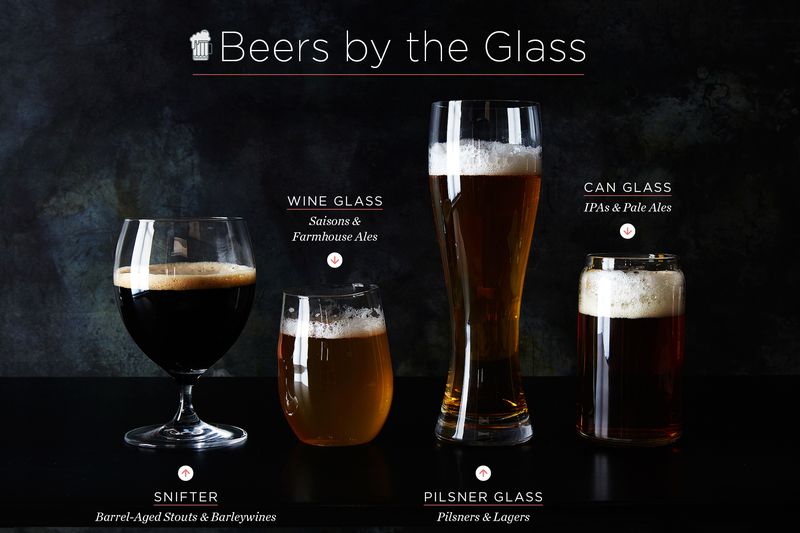 Just like the liquid it holds, beer glassware has come a long way over the last decade. The lamentable, ubiquitous shaker pint—which, as the name implies, was originally used to mix cocktails, not serve beer—is still the standard at most bars and restaurants. But now bartenders and especially sommeliers are recognizing the need for serious stemware to match the increasingly high quality of beers on the market.

As with wine, the one-size-fits-all model doesn’t always cut it. Lighter beers like pilsners and wheat ales are best dispensed in generous pours into tall, straight-walled glasses. Rich, intensely flavored beers like barrel-aged stouts and barleywines, on the other hand, are partial to short pours in squat, bulbous snifters. With so many glasses to choose from, it can feel daunting to decide what glass is appropriate for which beer. In general, look for stemware that is versatile rather than style-specific, and choose sleek and classic (a wine glass) over clumsy and trendy (the beer-in-a-Ball-jar trend is mercifully on its way out). Here are our picks for matching the best glassware with the best beers: 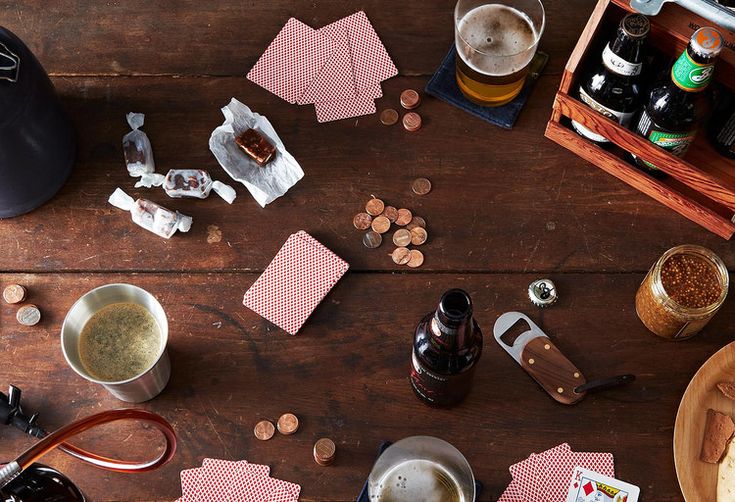 Because of their high ABVs and strong, aggressive flavors, imperial stouts and barleywines are meant to be served in small pours at cellar temperatures (around 55° F). This makes them perfectly suited for a short-stemmed, globe-shaped snifter like the kind you’d use for bourbon, brandy, or cognac. The balloon shape focuses volatile aromas that would otherwise dissipate in an open-topped glass while allowing the beer to unfurl and develop as it warms in the glass.
Our pick: Riedel Vinum Brand Glass

The Style: Saisons and Farmhouse Ales
The Glass: Wine Glass

No, it’s not pretentious to put beer in a wine glass! Especially if you’re drinking a fruity, light-bodied, highly effervescent saison or farmhouse ale like the ones brewed in Belgium and France where wine glasses are de rigueur. Not only is it the perfect size for beer (comfortably holding around 10 to 12 ounces of liquid), the stem prevents your hand from warming the beer as you hold it. Need more proof? Wine glasses are increasingly the go-to stemware at serious beers bars like Tørst and Spuyten Duyvil in Brooklyn.
Our pick: Stölzle Red Wine Glass

The Style: Pilsners and Lagers
The Glass: Pilsner Glass

“Pilsner” glasses come in many shapes and sizes—from slim, towering vessels to clumsy, thick-walled steins with knobbed handles. Our favorite design is one that is sleek and thin-lipped and that holds a significant amount of beer without allowing it to become warm and flat by the time you get to the bottom of the glass. (Remember: pilsners should be served not just cool, but cold.) Though they may not be traditional, many new pilsner glasses are designed with short stems which look sophisticated on a dining table and and lend a touch of elegance to a beer style that doesn’t often get much love.
Our pick: Nachtmann’s Vivendi Pilsner Glass

The Style: IPA’s & Pale Ales
The Glass: Can Glass

Over the last few years, one of the most widespread trends in beer is the packaging of big, hoppy IPAs and pale ales in 16-ounce cans. Minnesota’s Surly Brewing jump-started the movement in the mid-aughts, while Vermont’s The Alchemist cult-ified it several years later with their uber-popular (and extremely limited) Heady Topper Double IPA in cans. Now glassware designers have begun selling 16-ounce can-inspired glasses that are literally pint-sized.

It may sound hokey but these glasses are legit. First of all, they’re a great alternative to the ever-present (and wholeheartedly clunky) shaker pints, especially if you can find a thin-ish one. And second, the slight taper at the top concentrates the hop’s ephemeral, invigorating aromas of citrus, flowers, and herbs. Plus, they fit a proper 16-oz pint pour in a single glass!
Our pick: Libbey Can Shaped Beer Glass

If We Had to Choose Just One: Spiegelau Beer Tulip (AKA Stemmed Pilsner Glass)
This is truly the most versatile beer glass you can buy, perfect for anything from pilsners and saisons to hoppy ales and imperial stouts. Its thin rim and curvaceous, tapered shape make any beer you pour into it seem like a revelation—it concentrates aromas, keeps the liquid inside it cool, and feels great in your hand.

Do you pour your beer in its proper glass? Would you rather allot your cabinet space to plates? Tell us in the comments below!

Joel October 22, 2015
Spiegelau makes the best glass around, hands down. But don't leave out the new proper plasticware movement! Check out B Cups plastic IPA cups for all the utility, half the cost and no breakage! http://bcups.net

Samantha W. September 21, 2015
Down with the shaker pint! Up with weird shapes!

Alan September 21, 2015
I lived in Belgium for quite a few years and every beer has its own glass there (and many Belgians will send their beer back if it's not served in the right glass). Most of them tend to be a variation on the snifter, except for pilsners and witbiers, which are typically served in a thin-walled half-pint version of the shaker glass. Anyway, as a result of this experience, I own a rather large number of beer glasses. By far my favorite is one I brought home a beer festival. It was used as a tasting glass there, but it is large enough to hold a full 330 mL bottle and resembles the Spiegelau Beer Tulip that you recommend. I paid about the same for mine as Spiegelau is asking for theirs, but mine came filled with beer....

Amanda S. September 21, 2015
So fun!! PS, when is it appropriate (always?) to drink wine from snifters as we do in my house? To me, it is the perfect marriage btw a tumbler and a long stemmed glass.