James Ransom resembles a pin-ball as he bounces between the camera and his computer, ricocheting off of lighting adjustments at the window to re-angle a knife in the shot.

His camera is pointed at a burrito in mid-assembly on what looks to be a marble countertop in a brightly-lit kitchen (see below), but, rather like a family dog patrolling for dropped scraps, props and wooden boards are poised just outside of the shot, ready to transform the scene into a dinner table tableau. Even further out is James's computer, enclosed by ceiling-height cardboard walls that block out ambient light and turn an otherwise open space into Food52's photo studio. 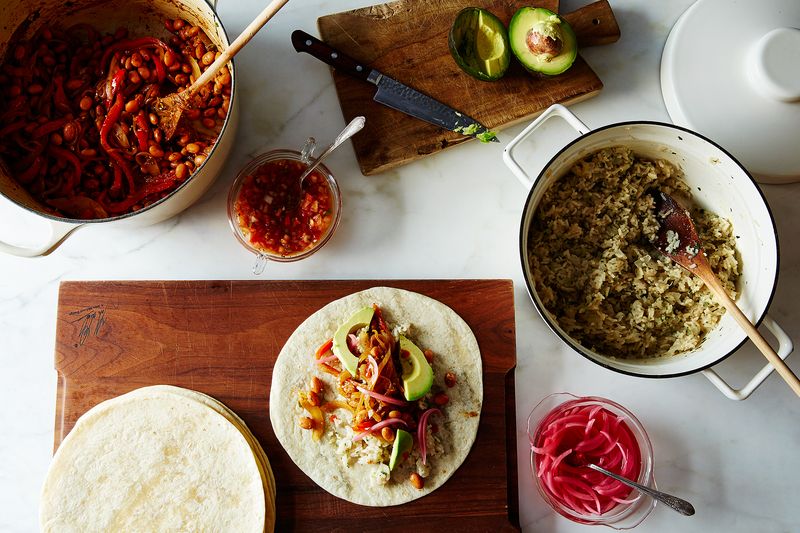 The props in this ingredient shot of the burrito are in a circular layout, which James says leads your eye through the composition.


When James first started at Food52 three years ago, his "studio" was Amanda Hesser's bedside table, which had the best natural light in the house (that was when we were still cooking in her kitchen for photo shoots). "We were shooting on a trunk by her bed," he remembers, "we'd put a board down and shoot food on it." (While we've re-shot many of our favorite recipes from this time, it's still possible to see evidence of the original photos, by clicking through certain recipes' photo galleries.) These spatial restrictions and James' ability to navigate them contributed to Food52's recognizeable style of photography. James says, "We had these space limitations, so we were forced to make something amazing out of limited resources, space, and time. When we [moved into] a new office, we were able to replicate it, but with room to shoot an entire dinner scene."

Sarah, the editor of the article featuring the burrito (a piece on getting enough protein as a vegan), removes the ingredients to set up for a "finished shot" of the burritos. James asks her, "Should I come down to three-quarters?," using photographer speak for a shot that's somewhere between head-on and overhead (see below). 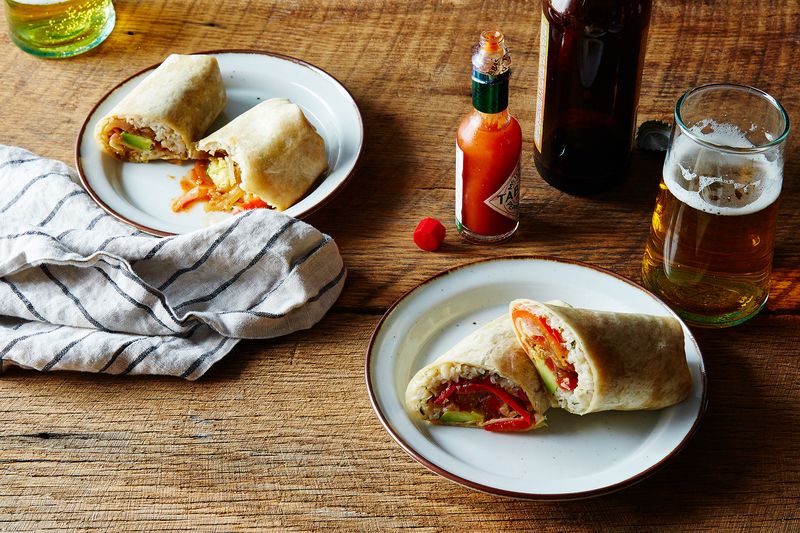 In this finished burrito shot, James loves the contrast of the warm wood and hot sauce bottle against the cool color of the plates and napkins.


As he lowers the camera, James directs me to the photo he just took of the ingredients. I've styled countless shots with James, but this is something I like to do whenever I'm on set with him: Assess the photo after the fact and pin-point what made it work. "I think every shot's different," James says, "I try to compose in a way that helps your eye moves around the image, so there's nothing bothering you like too many objects touching. The visual weight should be evenly balanced." He traces the direction of the utensils with his finger, which form a barely-noticeable circle in the photo. "The more time you want to spend looking at a picture," he continues, "the more successful it is. 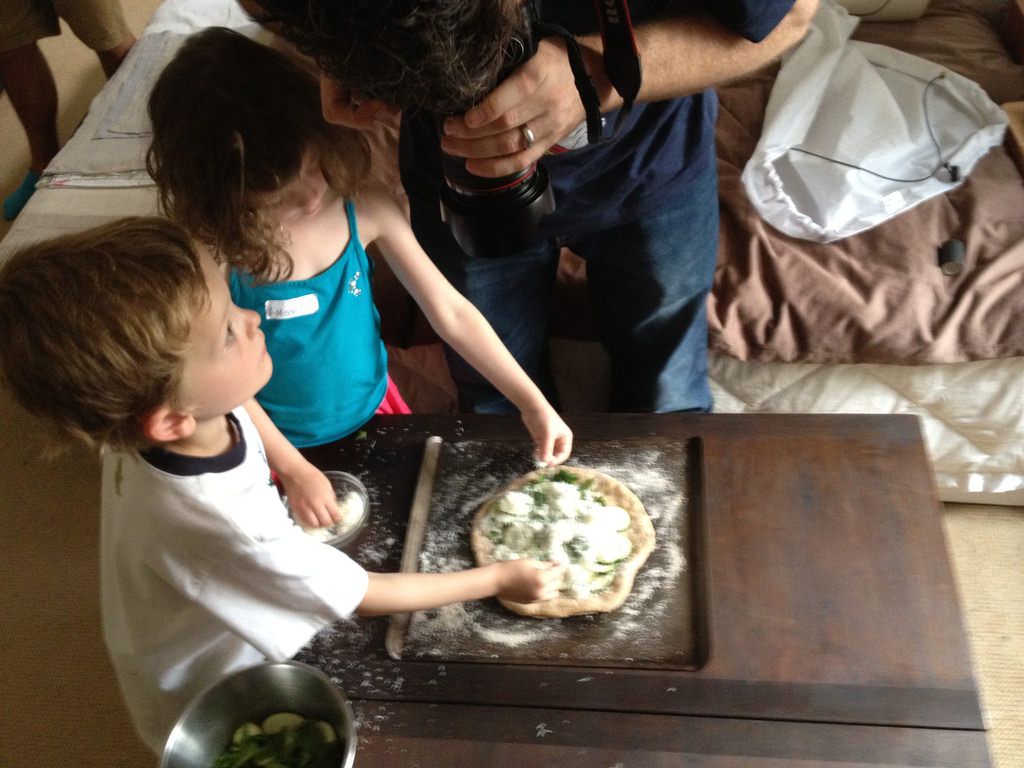 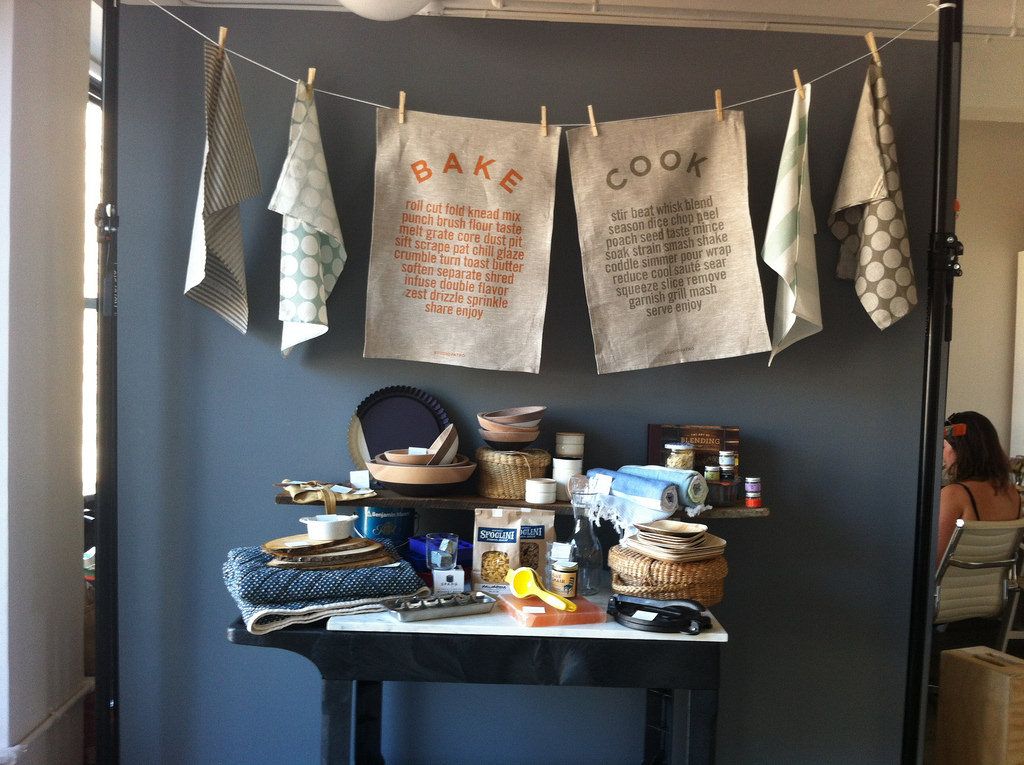 Left: James photographing some little helpers in the "studio" at Amanda's house. Right: The upgraded studio at our last office space.


James didn't always shoot pots of beans and rice with knives placed just-so—he thought he was going to go into product photography until he served as a photo assistant on a shoot for the late Gourmet magazine. "It opened my eyes to what food photography could be," he says of that shoot, "Some of the commercials I had done before faked the food to make the turkey last all day, but at Gourmet, and later at Food52, the food was realistic." It was a perk of the job when he started at Food52: "We used to joke around in my contract that I got to eat whatever I was shooting."

More: Here are five of James' essential tips for taking a beautiful photograph.

James' train of thought is disrupted as he takes a photo of Sarah's tabletop arrangement. "That Tabasco sauce right now is amazing," he says, sounding genuinely awestruck in reference to the bottle of hot sauce placed between the two burritos. James says that color is the first thing he looks for in a photograph. "In my head, I see things a little more colorful than they are in real life, so I sometimes add a little saturation. I like things just a little juicier." When I ask him if it finds it ironic that he photographs for a company that loves neutral colors (and even has their own shade of gray), he says, "My favorite color is gray because it's a platform for other colors." 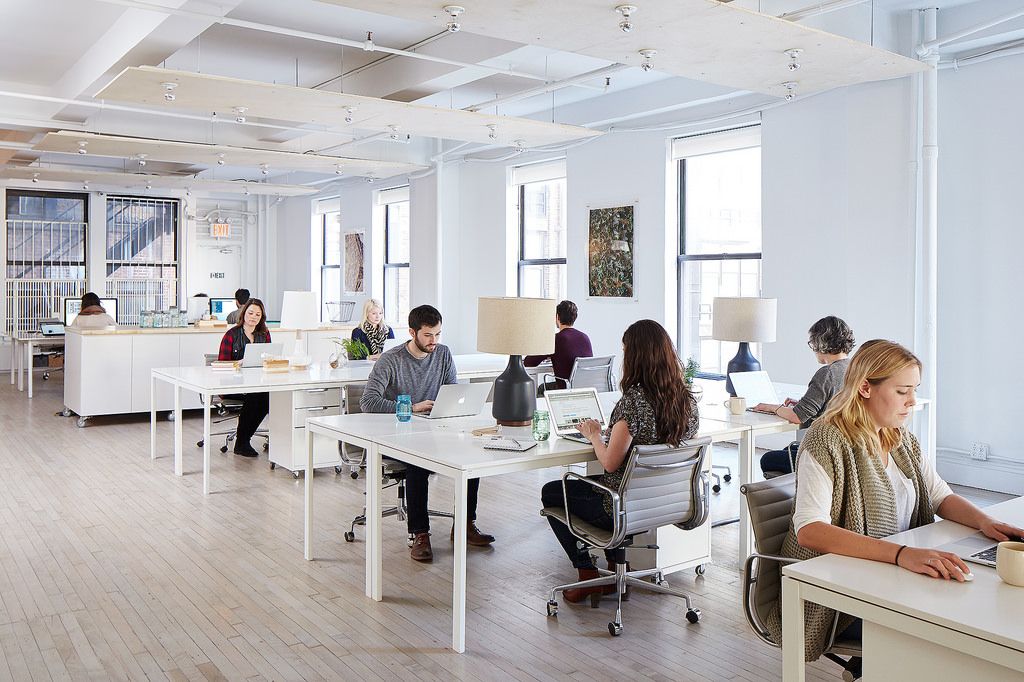 Enlarged versions of James' photographs are framed in the Food52 office (and newly available in our Shop!).


It's fitting then that gray serves as the background for the photographs James chose to display in Food52's office, which are now available for purchase exclusively in our Shop. The three photographs, part of James' series on roasted food, are all shot directly on a sheet pan. "I didn't discover this series until we were trying to find prints to put into the new office," he says of the images. "Many of our shots were too strong or overpowering for a room, but when we pulled these three up, they just made sense and became part of the room." 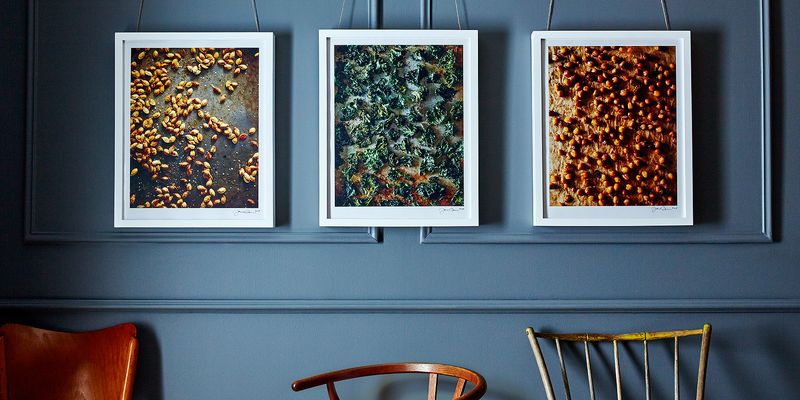 
Each of the photographs features a different roasted food (chickpeas, kale, and pumpkin seeds), but what's most interesting is how unique each print is. The roasted kale creates a textural pattern, like an elaborate line drawing, with an ombré effect from some browning on the pan. "The kale almost looks alive when it's roasted," James explains, "it takes on this sculptural shape that doesn't exist in raw kale." On the other end, the the salt and roasted spices on the pumpkin seeds offer a contrast to the maze formed by the seeds themselves. In particular, James is smitten by the chickpea photo, saying, "When you look at chickpeas, they're blah and beige, but when you roast them you get these oranges and yellows. It turns into something else completely." 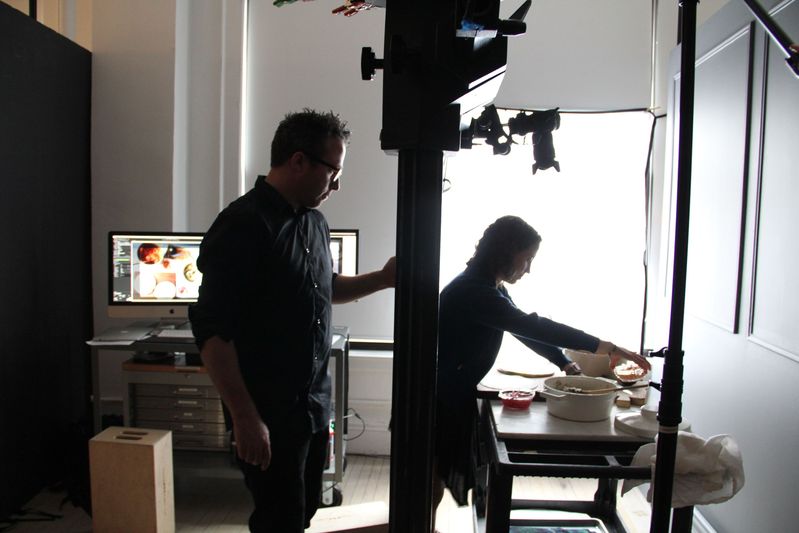 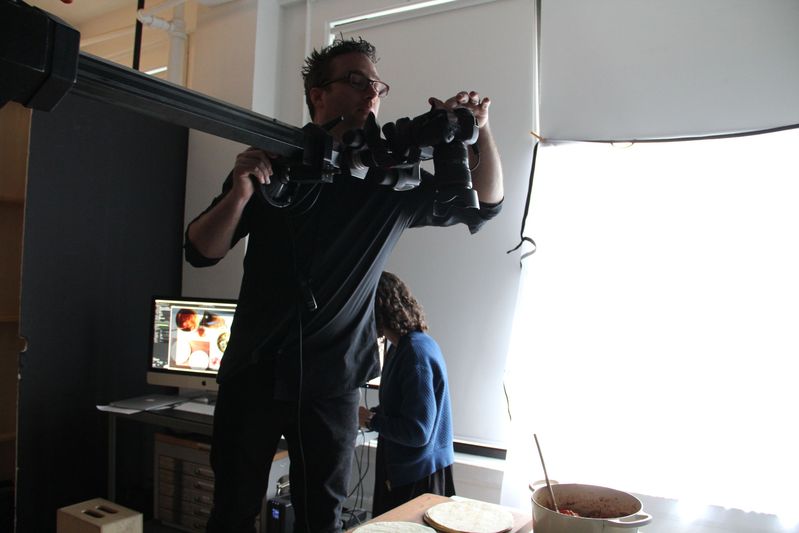 
The patterns formed by these roasting pans of food transform them into something that can be appreciated by anyone. James says, "I think people who love food will understand these really well, and people who don't love food will still appreciate them. That's the happy medium—they’ll work for lots of different types of people." But an appreciation of food is always welcome.

James' attention returns back to the shot at hand as Sarah rearranges the burritos. "Okay James," she says, "Do you want to take a bite out of one?" Yeah, I do.

What are some of your favorite food styling tips? Is it just us or is James living the dream? Tell us in the comments below!

Photos of burritos and prints by James Ransom; photo of office by Mark Weinberg

Kathleen C. November 4, 2015
I would love to know what paint color is used in your backdrops? The photographs are so beautiful!

joan October 24, 2015
He definitely is living the dream.
Great article.

Gabi V. October 19, 2015
I love this behind the scenes peek! I actually use my desk for taking photographs for blogs - which can sometimes be pretty inconvenient. But, already on the search for new textures and "backdrops" (aka your marble board!).