What if the point of building a tiny house in the woods is not to live in it? What if it's not entirely about embracing a minimal life, reducing one's footprint, or the assumed relief of having hauled the bulk of your material posessions to Goodwill? What if, in fact, building a small shelter in a remote location is really just about the act of making it? Living in the cabin isn't the dream. Building it is. 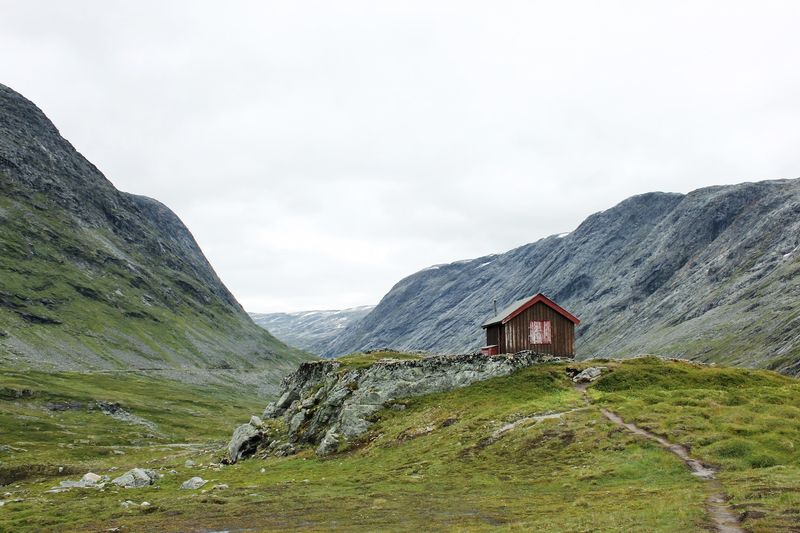 A recent New York Times feature chronicled the realization of Beaver Brook, the real-life cabin—or, rather, network of small structures—in the woods that's the property of Zach Klein (creator of the viral Tumblr called Cabin Porn and a new book by the same name) and the lucky friends he's invited to be a part of it. The journey—starting with Klein's earliest inklings that he'd like to build an off-the-grid retreat—is characterized in this piece as indicative of a "back to the woods movement," in which today's busiest bodies eject themselves from the torments of social feeds, strangers, and smoking, smelly traffic, to live outisde for just enough time to feel good about going back.

After speaking with Zach, who, yes, was a partner at College Humor and one of the founders of Vimeo, I was pleasantly surprised that what he was most eager to share wasn't about a new American dream and his role at the helm of it, but something more humble and human: his mistakes. (You'll find a few in the Times feature—"Composting drew bears" is one—but mainly, it dwells on Beaver Brook success stories, especially a brand new bunkhouse that can sleep 20.) 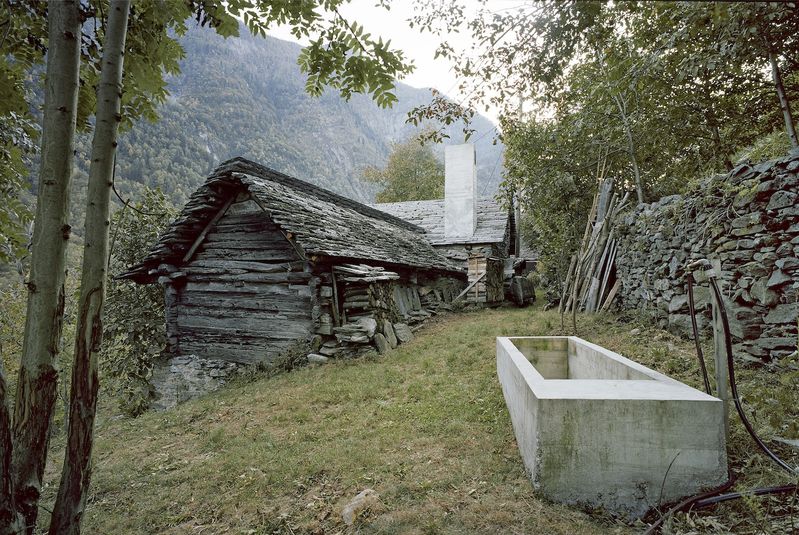 Turns out, Zach's not that proud of that bunkhouse. "When I look in it, I realize we didn’t understand that the challenge wasn’t only to make a building that sleeps 20 people—it was to make building that belonged," Zach says of the project, not wistfully but with the confidence that must come from having done this before: We did something wrong, but had the right intentions. We are not ashamed at all, and we learned some critical lessons. What could be more relatable?

If you build it... Kevin Costner thought he heard across an Iowa cornfield, but Field of Dreams wasn't a movie about baseball games. The building of that diamond (and the people who started cropping up) was the whole point. 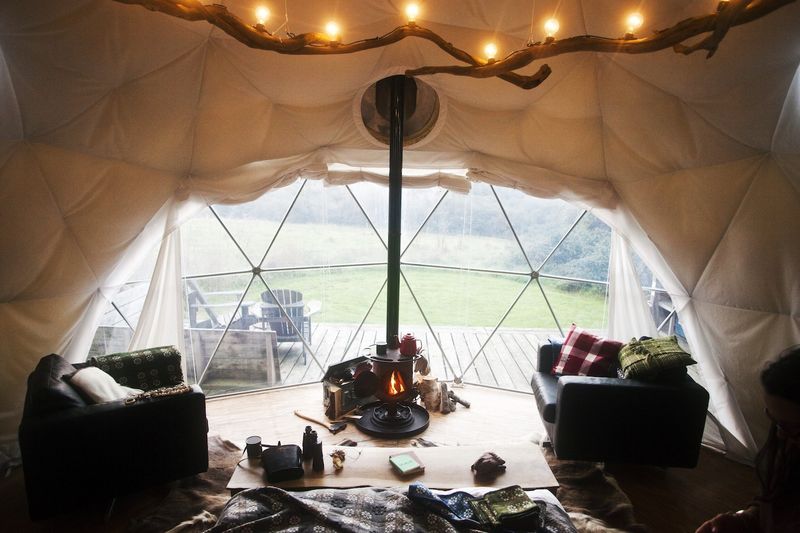 "The interiors are really the most special; there’s a lot more complexity inside. You can see the artifacts of peoples’ lives, which tell a better story, and that’s what the book was for us. We made a decision when we started the blog that we wouldn’t make it something we wouldn’t have time for (so many great blogs have died because they’re too ambitious)—this thing would never be too much trouble. That said, I feel a tremendous frustration: I know we’ve missed so many great stories, and so the book was our chance to tell them. It was our reconciliation for those stories we didn’t get to tell." 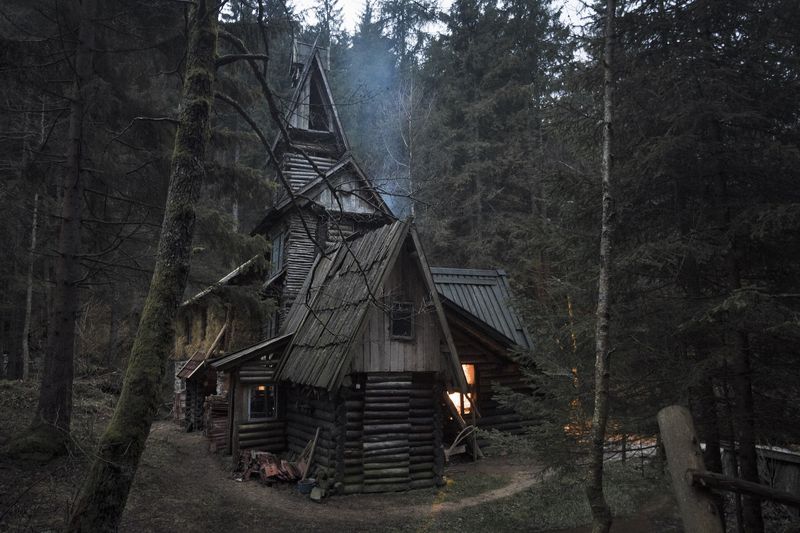 1) Maybe the word "shelter" is better.

"We don’t live in the cabin, we live outside," Zach says of his upstate retreat. "The shelters just serve as storage, as places to sleep, as places to get out of the rain. I think that’s the primary difference between a cabin and a home—a home has an atmosphere." At Beaver Brook, visitors eat 95 percent of their meals outdoors: "For us, the key priority is that the cabin provides a convenient shelter to be close to nature. It's mostly so you just have a short trip to get outside."

Halfway through building Beaver Brook, Zach read Christopher Alexander's Pattern Language: "It was deeply influential on me. Alexander suggests that when people buy a piece of land, they shouldn’t build their house on the prettiest site, because a tremendous number of factors and forces came together to create it and that place should be preserved. Instead, go find the ugliest place on the site—that’s the place that deserves our ingenuity, that’s the place to make something beautiful." 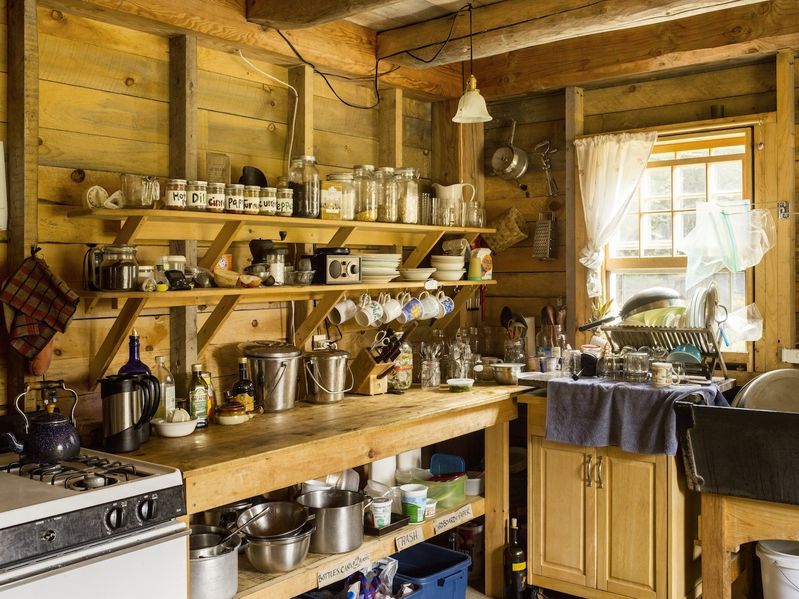 3) Some skills are best learned on the job.

"Cabins are things that you and your friends can build yourself; they don’t require techniques and tools that are too difficult to acquire," he says sincerely. "The goal is to construct a building that’s durable and does’t require much maintenance, since it's probably going to be challenged by the elements more than a typical suburban home would."

4) A surface and a heat source make a kitchen.

In the modern western world, having a kitchen island (for extra storage, extra counter space) is almost considered a necessity. But in tiny house design, excess is the first thing to go:

"At Beaver Brook, our kitchen is nothing more than two working surfaces with a propane cooktop and two single burners. There's no refrigeration, so we use coolers and ice and a water tank that can be filled up periodically (for storing potable water). For dishes, we have a large basin on a propane burner outside, that we fill with water and heat up." There's something to learn from that simplicity.

5) It is okay (and even brave, brilliant) to kill a darling.

Zach describes the reason they built the bunkhouse at Beaver Brook, the structure built to sleep twenty: "because we wanted to spend more time here, we wanted something to accommodate our friends and family who aren’t really up for camping." (This is the building that's really the focus of the New York Times piece—a symbol of knowledge earned and community living.)

To build it, "we salvaged a barn frame 20 miles away and we built this looming building—we designed and managed and kept it up. But in doing that, we’ve realized this building doesn't belong here...We borrowed and repurposed it, and designed it away from the land." The way he says it—that they'll have to start afresh—is with relief.

6) Understand the problem you're trying to solve.

"The thing I’m most proud of at Beaver Brook is not a cabin—it’s a bridge we built," Zach says, of an airy, almost ethereal construction that spans a creek on the property. "It took us a week to build and was designed by my friend Jace Cooke. We had been using a tree and then a few of us fell. It’s a thing we use the most; it’s something that we built that feels like a perfect setting. We photograph it, and we love seeing the joy of people who cross it. It feels like it belongs."

Editor's note: An earlier version of this story said that Zach had plans to tear down the bunkhouse, but there are no plans to do so.

clotilde October 16, 2015
Wonderful piece, Amanda, thank you. I especially like the concept of not building your house in the prettiest place on your land. I'm sure there's a broader life lesson to draw from that.
As an aside, many people say the (very ugly) Montparnasse Tower in Paris is the best place to live in the city, because it's the only place from which you *can't* see the Montparnasse Tower. ;)

Rhonda35 October 22, 2015
Clotilde, I was in Paris a week ago and heard that sentiment regarding Montparnasse Tower several times. :-) I, too, like Christopher Alexander's concept of leaving the prettiest places as is.