How to Make a String of Mini-Pumpkin Lights

Small pumpkins are cute and all, but they tend to just sit on tables as centerpieces or on stoops as an attempt at festive decor.

So this Halloween, we decided to turn baby pumpkins into something surprising and at least slightly useful: a string of lights. I admit to having obsessed over this a little bit—Should we somehow affix them to a string of Christmas tree lights? How dangerous would it be to use real candles and flammable twine? How many mini pumpkins on a string of lights is too many?—but it all turned out for the best. 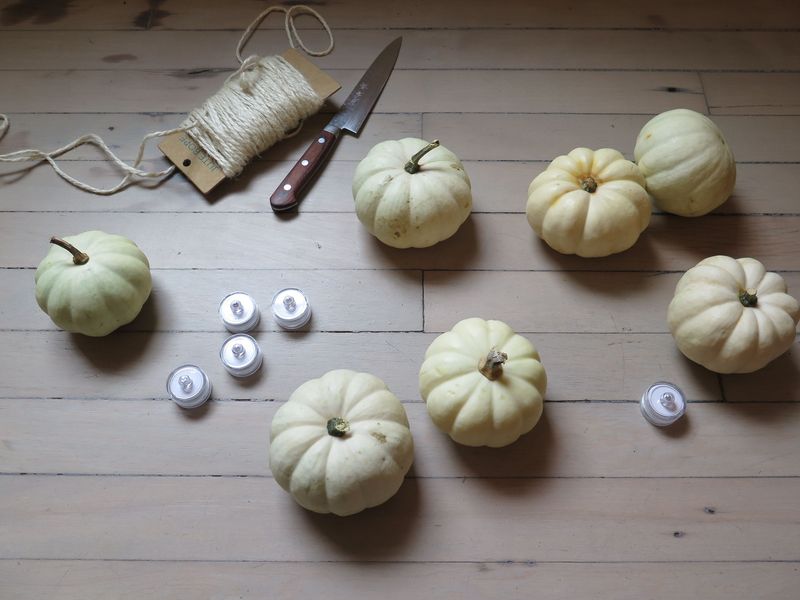 6 or so small white pumpkins
A sharp knife
A metal tablespoon, for hollowing
An awl
White twine
Electric votives

How to turn your baby pumpkins into a string of lights:

Carefully slice around the stem with a paring knife, remove the pumpkin's hat, and scrape out the seeds and gunky bits with a metal tablespoon (the sharp, sturdy edges will make this go very quickly). 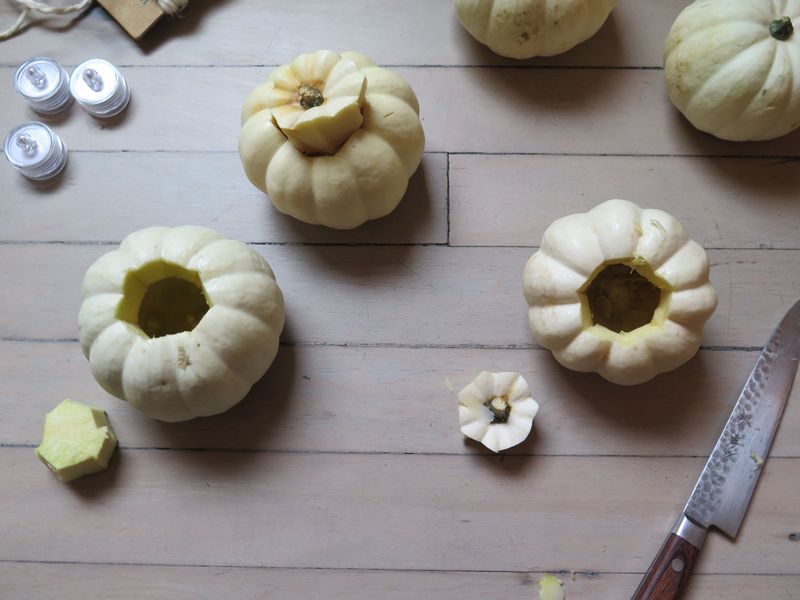 2) Make holes for the string.

Using an awl, punch two holes in each pumpkin, one on each side of the top opening. 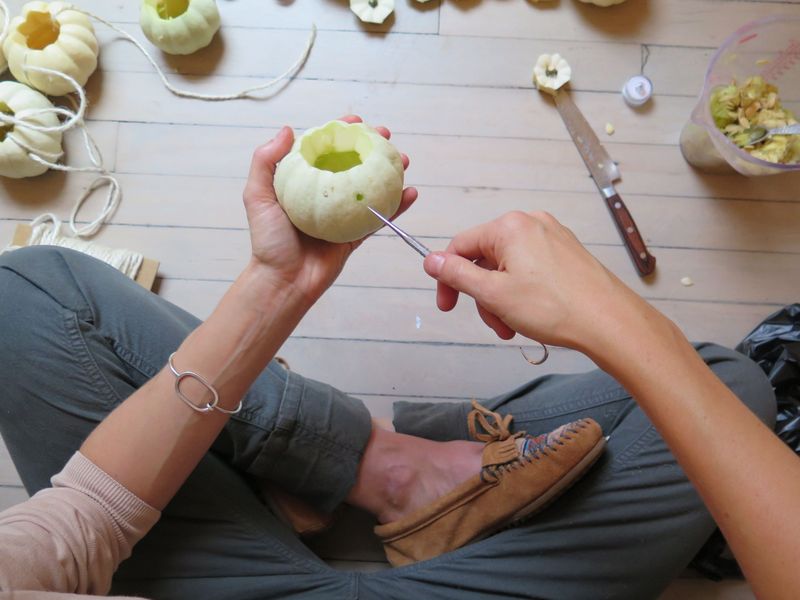 3) Thread your pumpkins onto a string. 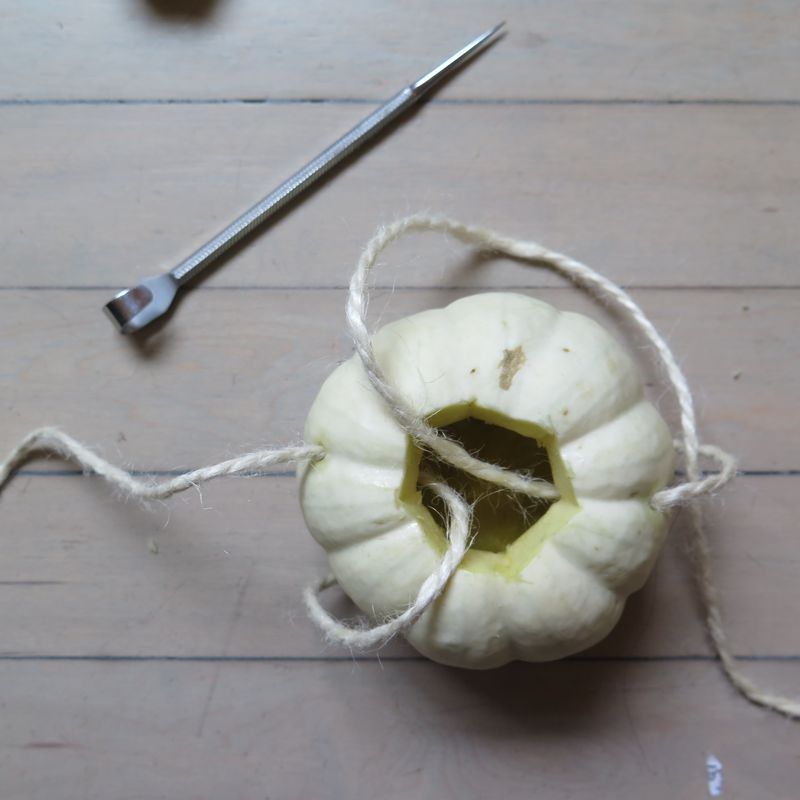 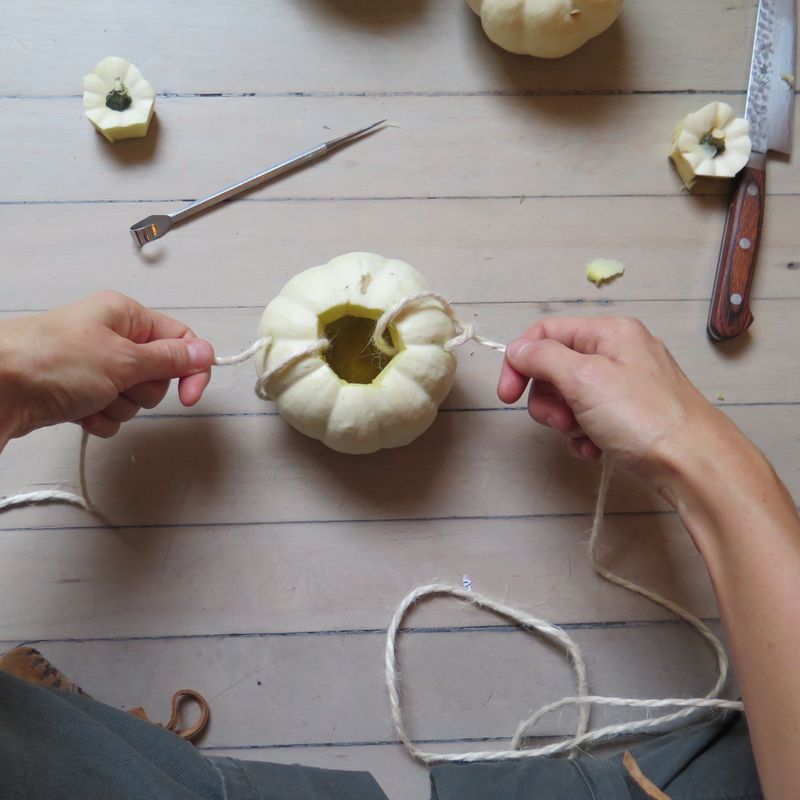 Now, wrap the string back towards the hole you started with, under the pumpkin, and through the hole on the other side (also pressing it through from the outside in), and then back out the hole where the stem was (see the path of the string in the image above, left). Allow about a foot of string between pumpkins, and then repeat until they're all strung together.

You can use real votives for this, which will make the lights even glowier, but electric ones are much safer and easier to handle. Turn them on, drop them in the pumpkins, and then hang them up. 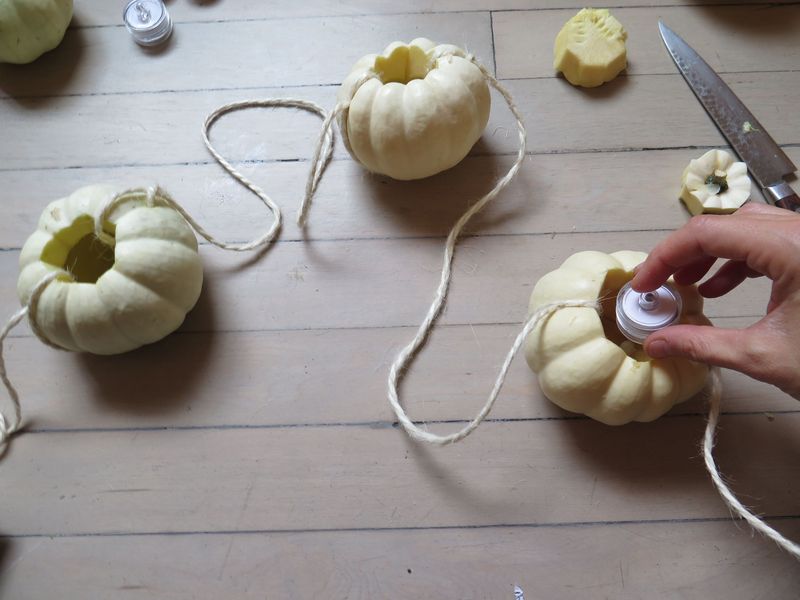 For some pumpkins, just one votive will be enough to make it glow, but others will need a few dropped inside. If all else fails, puch a few more holes with the awl to let some light out. 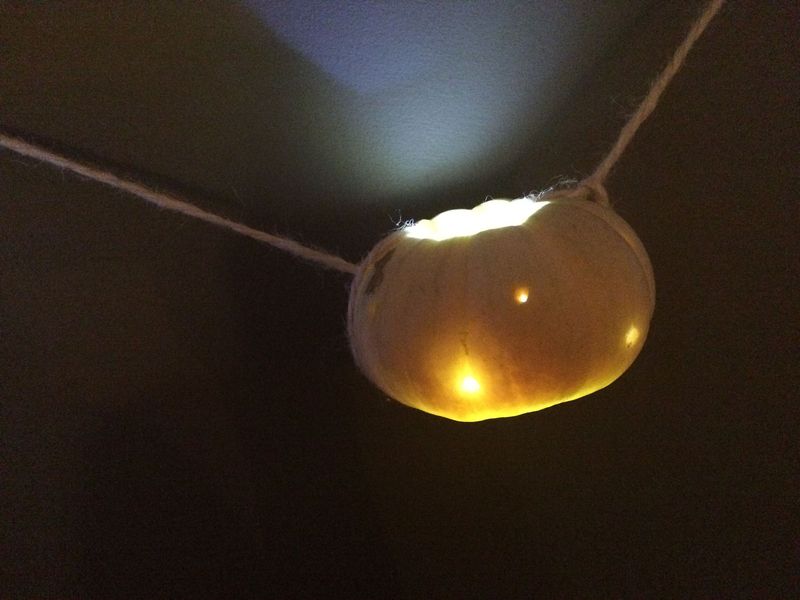 How do you decorate with tiny pumpkins? Let us know in the comments!

IlovePhilly October 30, 2015
This is super cute! I wish I'd come across it earlier in the season. Next year!

amysarah October 23, 2015
I love mini white pumpkins. I often do a cluster of them, mixed with a few (mismatched) small white ceramic vases. Next time, think I'll carve them and add votives to the mix!

Btw, your votive idea reminds me of these: http://globaltable.com/product_view.php?id=7 (you probably know it already, but if not - great shop for interesting, well priced dishes/serving pieces, etc. - maybe for photo props.)