The Story of our Dinnerware Line from Hawkins New York

Last month, a bus dropped off the entire Food52 team in front of a small shop in Hudson, New York, which is a town about two hours north of New York City on the Hudson River (did you see #f52fieldtrip?). As we rolled out of our seats and breathed in the fresh, non-Manhattan air, Nick Blaine and Paul Denoly, co-owners of the shop Hawkins NY, greeted us and welcomed us into their store. 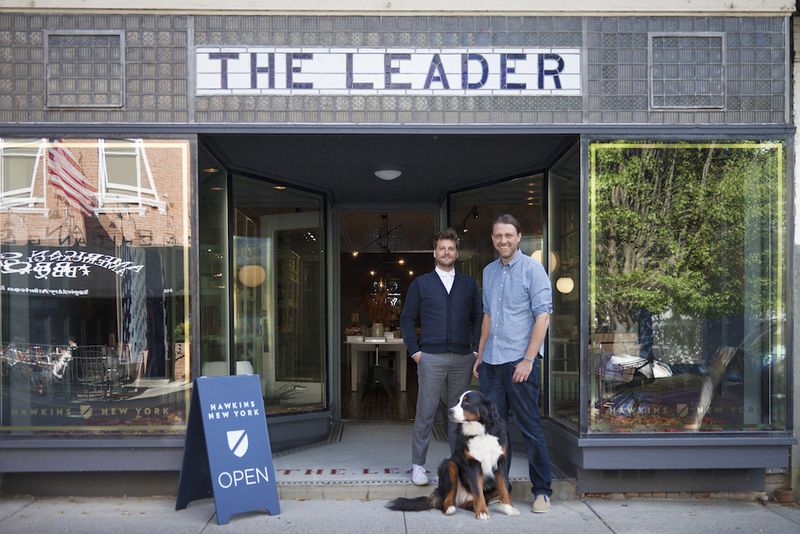 Nick (left) and Paul (right) stand with their dog outside their Hudson store.


The light-filled Hawkins showroom was lined with goods we recognized from our Shop—Moroccan tumblers, a two-toned vase, wood candlesticks—as well as several products we hadn't seen before. We've long been fans of this creative team, who had organized a wonderful meal for all of us after the trip upstate.

But what we didn't see that day was a project going on behind the scenes, one that's been almost a year in the making: Hawkins New York's brand new dinnerware line designed just for Food52. The pieces, which Nick describes as "modern and timeless—having both depth and warmth" include dinner and salad plates; cereal, shallow, and serving bowls; and mugs and platters—all of which are newly live in our Shop today. 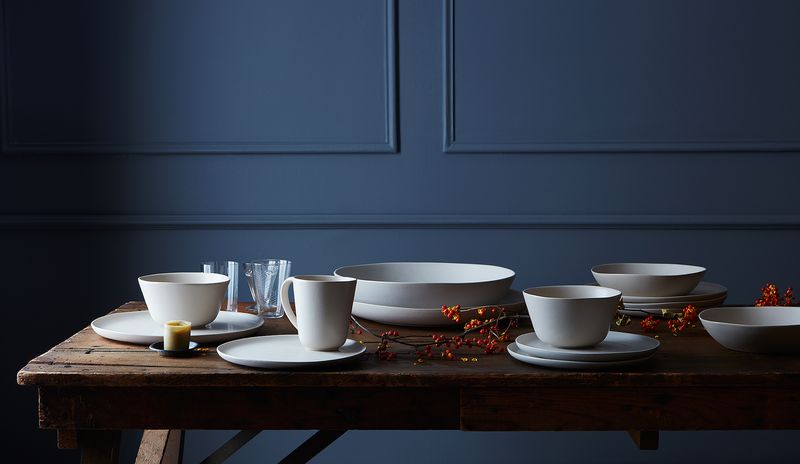 
Born from a joint design process (both teams had creative input) that lasted several months, the new dinnerware is exactly how we hoped it would be: The pieces have an organic shape to them, with a natural matte gray glaze that's elegant enough to use for special occasions, but down-to-earth enough for weeknight dinners. "We wanted a design that would highlight the food rather than take away from it—with easy care and versatility," Paul explains.

You can tell it's not machine-made. "The idea for this line came from the fact that we were sick of mass-produced dinnerware," Nick says, "We wanted something that had an organic shape, so we worked with our makers in Portugal to create something that...isn't totally even or perfect." The resulting dinnerware is cast from molds of handmade pieces so it has the look of handmade items—but without the price. It's what Nick and Paul eat on every day—and they each have their favorite pieces.

While Paul's favorite is the Shallow Serving Bowl (he loves that you can serve a whole roast chicken on it, like the one above), Nick loves the personal-sized Shallow Bowls. "I recently served Boeuf Bourguignon in [them] for a dinner party, over quinoa to modernize it," he says, "It's also a great way to eat a pork chop on the couch without flinging half of it onto the fabric."


With visions as strong as these, it's no surprise that most of Hawkins' products are designed by Nick and Paul themselves, who were once Manhattanites before ditching the city for the great outdoors. "We came up [to Hudson] on a Friday, went to a wedding on Saturday, and started looking for houses on Sunday," Nick remembers. Then, as happens to many New Yorkers who discover (or re-discover) the appeal of the Hudson Valley, "The weekends quickly became three-day weekends, and then I stopped wanting to go back to the city at all." Paul, a retail buyer, continued to work in the city, while Nick, who has a background in retail and visual merchandizing, managed their then-new design business from upstate.

The decision to start a company was also spur-of-the-moment. "About six years ago, we were out to dinner with some friends who were lighting makers and they couldn't keep up with production, so we volunteered to help them," Nick recalls. It didn't take long for the duo to start reaching out to other designers, like Nick's friends from his alma mater, the Rhode Island School of Design, and soon Hawkins NY started to take over their entire house.


As the business grew, and Paul was able to leave his job to join Nick upstate permanently, their collection of items started to take on a modern look that incorporated the homey feel of Hudson. "We both really respond to all kinds of design," Nick says, "We both love antiques and traditional items, but we also like a contrast." (We can hardly disagree.) We've only known Nick and Paul for the better part of two years, but it already feels like a long, happy friendship. They even shared a recipe for an herby green salad that they serve with every meal—proving that sometimes the simplest things are best.

See the whole recipe (and save and print it!) here.

What do you look for in dinnerware? Do you have secret dreams of moving to Hudson now? Tell us in the comments below!

Top photo by Genevieve Garruppo for Lonny Magazine; photos of glasses and candles by James Ransom; photos of dinnerware line by Mark Weinberg

Holly January 14, 2016
What is the dog's name? He (?) has quite a presence. Love NY city and state. Hudson sounds very interesting. The dinnerware is cool. Will explore.