colombedujour won the contest for Your Best Apple Cake with Rum Apple Cake.

apartmentcooker won the contest for Your Best Potato Gratin with Individual Sweet Potato Gratins with Creme Fraiche, Onions and Bacon. 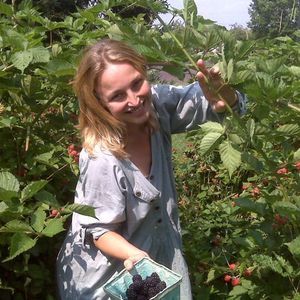 The first time I helped my grandmother make her coconut angel food cake. She still makes it to this day.

One of the first times I was in the kitchen with her, she had me
decorate the cake. She sent me to the patio to pick some magenta
impatient flowers to put on the cake. The cake is coated in coconut,
so it’s white and putting the flowers on dressed it up considerably.
In that moment I realized how beneficial it is to have things growing
in the garden that you can use in your cooking. My grandparents lived
in a small town so they had a huge yard where they grew so many
things. It was impressive to me because we could go out in the yard
and pick tomatoes, potatoes, beets, string beans-all sorts of things.
It was so different than what I was accustomed to growing up Chicago
as a city kid.

I guess this is where my desire to have flourishing edible window
boxes at all times must come from.

I made some delicious sesame noodles a few days ago to bring to a
picnic. For the sauce I used peanut butter and Tahini, shoyu, mirin,
ginger, hot sauce, toasted sesame seeds, scallions.
What is your favorite food publication and why?
Delicious Magazine is great. It features beautiful photographs and
travel related food stories. I like Gastronomica too because it
includes a broad range of food topics. I'm also a fan of Donna Hay’s
magazines. The photographs are always fun to look at.
Describe your most spectacular kitchen disaster.
One that comes to mind is when I was making butternut squash with
rosemary lasagna for a dinner party. There were about 20 people over.
It bubbled over and bits were burning on the oven floor which set the
smoke alarm off. Super loud and annoying as you can imagine. We opened
all of the windows and the doors, fanned the smoke alarm with a
newspaper. A friend told me to put baking soda on the bottom where it
had bubbled over. I guess it was spectacular because I learned the
handy trick that night and I've used it several times since as a
preventative measure.
What's the kitchen activity that's most cathartic for you? Least cathartic?
Most cathartic-pitting cherries, cleaning stringbeans
Least cathartic-cleaning shrimp
Apron or no apron?
I prefer no apron, but if I’m having a dinner party, I like to wear an
apron just in case something gets on my favorite outfit.
What's your favorite food-related scene in a movie?
There’s an amusing one in 9 ½ weeks.
What do you listen to (if anything) in the kitchen?
Depends on my mood. Yesterday it was the Grateful Dead live from Cairo.
I like brazilian and jazz in the kitchen too.
Your favorite cutting board is: a) wood b) plastic
a. wood
When it comes to tidying up, you prefer to: a) clean as you cook, b) do all the dishes once you've finished cooking, or c) leave the kitchen a shambles for your spouse/roommate/kids to clean.
definitely a.

My grandmother gave me a recipe for my great-great-great grandmother's famous sugar cookies. As I walked out the door she said "Here, take this", and handed me an old cookie cutter. "It's the one she used to make these cookies." That's when I realized the best part about food: it not only fuels us, but it lives long after we're gone.

A simple spinach salad with roasted mushrooms and bacon wrapped figs.
What is your favorite food publication and why?
Cook's Illustrated because it's so wonderfully informative and timeless.
Describe your most spectacular kitchen disaster.
When I was 16, I announced to my mom that I wanted to go to cooking school. She rolled her eyes, and warned me that I had better not make a mess in her kitchen. One day while she was out gardening, I embarked on a candy-making adventure. I melted chocolate in these tiny glass bowls she had and stirred it with little butter spreaders she had that had plastic fruits on the handle. The bowl wasn't heat-safe glass and I accidentally left the spreader in it once and stuck it back in the microwave because I got distracted by the phone. I was on the phone, blabbering away, when suddenly the whole bowl ignited in the microwave. I panicked, dropped the phone, and put out the fire, and moved the bowl to the counter. Then I picked the phone back up and said "Ok...everything is FINE". Then the bowl exploded, and burnt chocolate, glass, and melted plastic went everywhere. Maybe she was right to assume I would make a mess.
What's the kitchen activity that's most cathartic for you? Least cathartic?
I love baking bread. The smell of it, the way my hands feel in the dough, the enjoying all of it's crusty goodness when it's done. Sometimes I get sick and tired of peeling garlic, because I use so darn much of it. I guess it's time to invest in a garlic press.
Apron or no apron?
At home, no apron. But I am desperate for a "party apron". My mom has this snazzy apron she wears when cooking at parties so that she doesn't spill on her nice clothes (it's bright and frilly).
What's your favorite food-related scene in a movie?
The spaghetti slurping scene from the Japanese film Tampopo. Because the noisy slurping noodles is a sign of enjoyment in Japan, a woman was teaching her students American ettiquette of quietly eating spaghetti. None of the children understood, and slurped loudly for about 10 minutes.
What do you listen to (if anything) in the kitchen?
Music or the sounds of sizzling.
Your favorite cutting board is: a) wood b) plastic
I like my plastic ones for smelly things like onions and garlic, but wood for everything else.
When it comes to tidying up, you prefer to: a) clean as you cook, b) do all the dishes once you've finished cooking, or c) leave the kitchen a shambles for your spouse/roommate/kids to clean.
A mixture of all of the above. I try to stay tidy until inevitably everything turns to shambles, then I scramble to do all of the dishes unless the boyfriend offers to clean up.