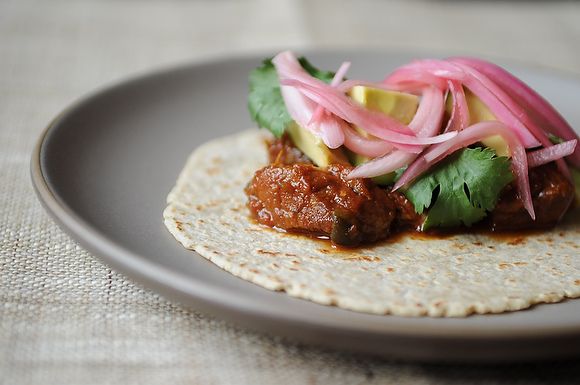 One of my goals for 2011 was to try more new recipes at home, rather than subsisting solely on old standbys like Linguine with Sausage and Broccoli or Roast Chicken. (Alas, even the best-loved dishes get stale after one too many encore appearances.) So I've been turning more to other publications for inspiration. Whether I stick to the original version of a recipe is another story, but I've found all sorts of great ideas in magazines and online over the past several weeks.

Last weekend, while checking out a cartful of home organization supplies at Lowe's (another New Year's resolution), I was mesmerized by a particularly gorgeous photo of bacon-wrapped meatloaf on the cover of a December issue of Fine Cooking (don't ask me why it was on the shelf in March, but it was), and in a fit of spontaneous consumerism, I chucked the magazine in the cart. The issue was full of treasures -- enticing one-pot meals from notable chefs, an article on ancient grains, and of course, instructions on how to make the meatloaf pictured on the cover -- but it was a photo of a pot of chili con carne, adorned with supple chunks of avocado and a spray of finely chopped red onion, that captured my attention. This recipe would be my muse for Sunday dinner.

We'd been eating a lot of beef recently, so I decided to try the chili with pork shoulder instead. Then, I thought I might reduce the liquid a little and get rid of the cannellini beans, so I'd end up with more of a thick stew than a soup. Maybe I should stuff the pork into corn tortillas, instead of serving it in bowls? And while I was at it, I might as well sub in aargersi's addictive, multi-purpose pickled onions for the plain old red onion, right?

With these and a few other modifications, some delicious pork tacos were born -- all thanks to the fine folks at Fine Cooking. And if my husband has his way, this will be the first recipe on our new list of old standbys.

Skinnyfatkid March 28, 2011
I just got a new slow cooker that will actually fit the pork butt that I find at the grocery store. This will be on the menu very soon!

Rhonda35 March 23, 2011
Merrill, you have solved my Friday night dinner-for-different-people-at-different-times issue! Thank you - I'm so glad you are a spontaneous consumer. I am one, too, but sadly for my waistline, it is of food, not goods.

Fairmount_market March 23, 2011
Looks delicious. I recently submitted a similar recipe for slow cooked pork, but using tomatillos instead of tomatoes, and included beans (http://www.food52.com/recipes/10507_anasazi_beans_with_tomatillo_shredded_pork). There are so many variations one can make on this theme.

Dono March 22, 2011
Delicious....I like to smoke pork shoulder for the tacos using hickory and apple wood...mmmmmmm....

Rhonda35 March 23, 2011
I wonder what this would be like with a pre-smoked pork butt from the grocery store??

dymnyno March 22, 2011
Sounds delicious...all you need is a squirt of fresh lime juice.

boulangere March 22, 2011
Spontaneous consumerism - I love it! Something in a whole grain soft taco or something over pasta are my frequent what on earth do I have for dinner answers. This looks fabulous!

singing_baker March 22, 2011
what a crazy coincidence! Thursday I was going to make slow cooker pork tacos and I was doubting the recipe I was going to use. I am definitely swapping out that one for this recipe. They look delicious and I love pickled red onions. yum. Also I just made some homemade pork stock and didn't know what to do with it. now I'll just swap out the chicken stock for pork. I am so excited!

Merrill S. March 22, 2011
Wow, I bet this would be delicious with homemade pork stock. Let me know how it goes.

singing_baker March 25, 2011
I quote my husband "best tacos I have ever tasted!" And he has had his share of tacos. Will definitely be making this again, its dinner party worthy. And I think the pork stock really made a difference. You know what happened, I could only find bone in pork shoulder so I ended up trimming the meat off and was left with this enormous bone with meat attached and I thought hey lets make some pork stock. I highly recommend it if you can't find boneless pork shoulder.

Mardi M. March 22, 2011
So funny - I made a VERY similar recipe yesterday, based on something I ate in Mexico over Christmas and a few variations I found online. I was lazy and didn't brown my shoulder before I threw it in the slow cooker (I also didn't toast the spices) but it cooked for 7 hours on low and came out deliciously falling apart pulled pork to die for! I added a touch of pineapple juice and some chunks of pineapple also to try to get that "al pastor" taste... it's good - a bit of heat a bit of sweet. I have printed yours out for next time though!

Burnt O. March 22, 2011
I find it enormously amusing and gratifying that someone who tests recipes a few days a week for a living still needs inspiration. My family always teases me about making something different every day, but even I get stuck every now and then. Last night was a perfect example. Cupboards were bare and I was too lazy to run to the store. Pasta carbonara with some sun dried tomatoes - here we come! PS I bet the folks at Fine Cooking would be happy to comp you a subscription. I love that magazine!