Congratulations to this week's contest winners!

Melissav won the contest for Your Best Stuffing Recipe with Ciabatta Stuffing with Chorizo, Sweet Potato, and Mushrooms. 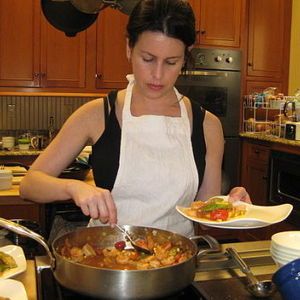 What is the most show-stopping dish you have ever eaten or prepared?

Chef James Dean Max is the chef at a local restaurant, 3030 Ocean, which we particularly enjoy. I once made a lobster dish from his cookbook, A Life by the Sea, for Valentine’s Day.  The lobster is poached in a homemade court bouillon, removed from the shell, chopped, returned to the shell, and served with a tokaji ginger sauce.  It was much more labor intensive than I anticipated but the end result was fantastic; maybe a little too fantastic as neither I nor my husband spoke for at least five minute once we dug in!

Describe a restaurant meal that stands out in your memory.

My earliest great restaurant memory is when my parents took us to NYC when we were fairly young - I was probably still in elementary school.  One night, we went to Mr. Chow for dinner.  We didn’t order anything, which in and of itself was a strange, new experience for me.  The waiter simply brought out a parade of food, each course more different and unique to my young mind than anything I had ever experienced.  I don’t remember any course in particular, other than the duck, but it was the first time I realized that food could be an experience, not merely a means to an end.  I think it was one of the defining moments in my life that initiated my love of food and cooking.

What's a piece of kitchen equipment you're dying to own?

I really miss having a gas stove so that is number one. I’d also like to have a countertop rotisserie.

What was the menu for the last dinner party you hosted?

Shellfish stew with chorizo, fennel, leeks, carrots, and green beans in a saffron and romesco flavored broth served with crusty bread.  I believe we started with a variety of appetizers, including baked goat cheese with tomatoes and a small Spanish tortilla. We finished the meal with ice cream, fresh fruit and a glass of port, my favorite!

Usually no apron but I really should never be without one. I never remember to put it on until it is too late.  Not only do I completely lack grace but I’m also a major klutz so I almost always end up wearing what I am cooking (as does the floor, the counters, etc.).  To top it off, I’ve been on crutches for the last 2 months, cooking up a storm while I roll around the kitchen on an office chair.  The mess has been compounded by my inability to get around and repeatedly rolling through the mess with the chair.  Luckily, I have a very patient husband.

That’s a tough one but the one that comes to mind first is the scene in Pretty Women when Julia Roberts is having dinner at some fancy restaurant and her escargot shell goes flying across the room.  I love that because I can totally imagine that happening to me.

What would you cook if you suddenly found out friends were coming for dinner tonight?

Goat cheese and mushroom encrusted rack of lamb, roasted asparagus, and roasted fingerling potatoes. I typically keep a few racks of lamb in the freezer and it is so easy to put together but looks much more impressive than it actually is.

You prefer to cook: a. during the day, b. at night, c. whenever

I would prefer during the day but that thing called work always gets in the way. Hence, I usually cook at night.

I always start out with (a) and as things come to the end, it always gets a little crazy so it ends up at (c).  Luckily, my husband is very good at doing the dishes and all the other little tasks I hate like chopping herbs, grating cheese, peeling potatoes; however, I think he is starting to catch on that I am giving him all the grunt work.

What is the most show-stopping dish you have ever eaten or prepared?

In Portland, Maine at a dive bar - they served raw scallop cocktail. They were huge, fresh scallops and while almost nothing was done to them, they were probably one of the best things I've ever eaten.

Describe a restaurant meal that stands out in your memory.

As a wedding present, my closest friends gave us a gift certificate to Le Bernadin. It was a completely special, unique and amazing 8-course experience that we never would have had if not for them. And, it was, obviously, all seafood and fish, which always makes me very happy.

What's a piece of kitchen equipment you're dying to own?

What was the menu for the last dinner party you hosted?

It was for my friend's birthday. The theme was Vietnamese: shrimp paste on sugar cane skewers, rice noodle salad with seared squid, whole red snapper and a banana-coconut milk tapioca pudding. It was a lot of fun and easy because even though there were a lot of little parts, they were all completed in prep so that the actual meal was (mostly) stress-free.

No-apron - but I do own about 8 that hang in the corner of my kitchen.

Probably more for the sentimental part of me than for the cook in me, but I always think about a scene at the end of Hanging Up - a movie I realize many people have not actually seen - when the three sisters finally come together and the two who don't cook are cooking Thanksgiving dinner for the sister who always handles family meals.

What would you cook if you suddenly found out friends were coming for dinner tonight?

Spicy Thai Mussels, Brown Rice with Spinach and I would probably buy ice cream for dessert, then regret not baking something.

You prefer to cook: a. during the day, b. at night, c. whenever

Whenever I find the time.

I wish I could say that I clean as I go, but I don't. Without fail, the kitchen is a mess when I'm done and my husband kicks me out to fix whatever damage I've done.

MrsWheelbarrow November 19, 2009
Hearty congratulations. I'd love to come for an impromptu dinner at either of these homes!

Kelsey B. November 18, 2009
Congrats everyone! It appears that all three of us have an apron problem...