For the past five months, we've been sharing videos and recipes from Perennial Plate's cross-country real food road trip. This week's installment is extra special for us, since our own mariaraynal helped plan it from the beginning, along with Lisa Ludwinski of Funny Side Up and Julie Alvin of AutoWeek.

Read on for Maria's report from the day -- accompanied by her daughter Mary Raynal's lovely photos -- and don't miss Perennial Plate's video of the event below. 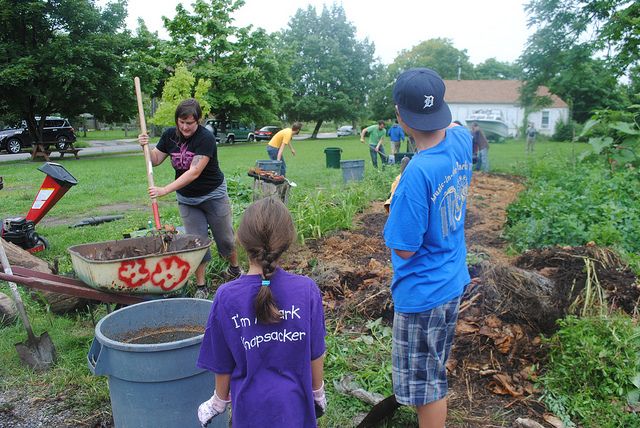 A few months back, Amanda posted that Food52 and The Perennial Plate hoped to conduct an experiment in transferring the camaraderie of online community into community action. In Detroit.

Wait, what... Detroit? To many, the city of Detroit is broken beyond repair, a wasteland unworthy of rescue. If you come here and drive the streets, perhaps you'd agree.

But I don't. I grew up here, in a leafy lakefront suburb bordering the city limit, watching the city fall into despair. In my mind, Detroit is like an old woman, her face deeply grooved, hands twisted and gnarled. To put it kindly, she's timeworn, tired. But if you look closely, you realize she was a stunner. A person of substance, determination and quiet dignity.

And she has stories. 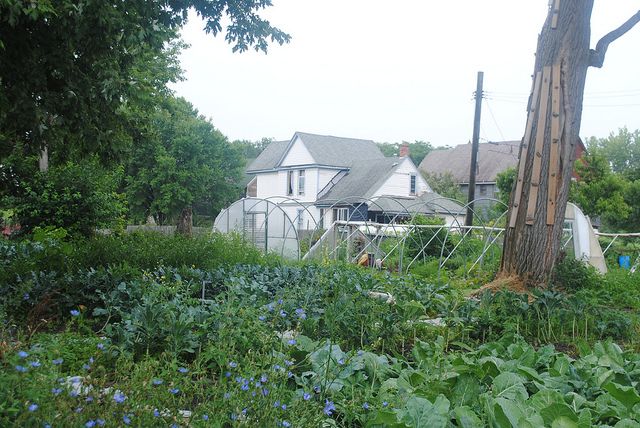 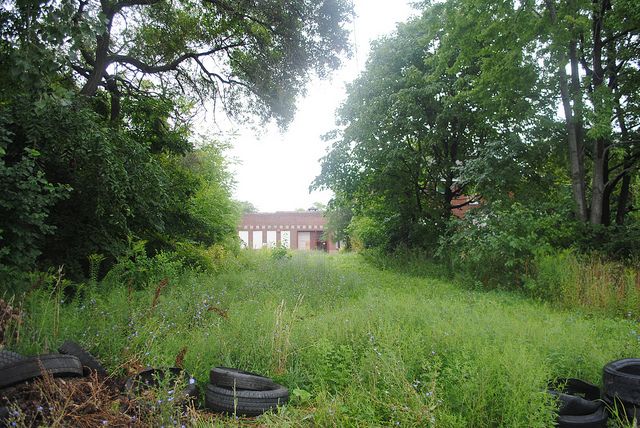 Today, few tales are as compelling as the rebirth of the urban farm and grassroots food community in Detroit. As the city struggles to reinvent itself, a patchwork of food collectives, coffee shops, restaurants and urban farms has become a small but mighty force; clusters of gritty resolution and hope amid a crumbling landscape.

Greg Willerer is at the core of Detroit's food scene. A few years ago, he took a big leap and left a 15-year teaching career to devote himself full-time to Brother Nature Produce, his 1-plus acre urban farm at his 1915 Victorian kit home in Detroit's Corktown. He had no real aspiration to become a farmer, but as his backyard garden flourished, with help from Greening of Detroit, he saw an opportunity to educate and inspire with food.

Today, he sells his produce to eight local restaurants, including Michael Symon's Roast, Mudgie's Deli and Atlas Global Bistro, has a thriving stand at the city's iconic Eastern Market and has launched Detroit Dirt, an initiative to make and supply compost to local farmers and backyard gardeners.

This is his life's work, but more than that, he's become a passionate advocate for food justice and developing a viable, self-sustaining, fairly priced food system in the city. 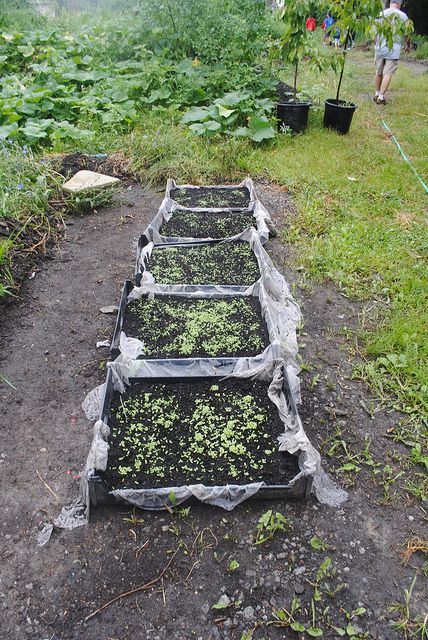 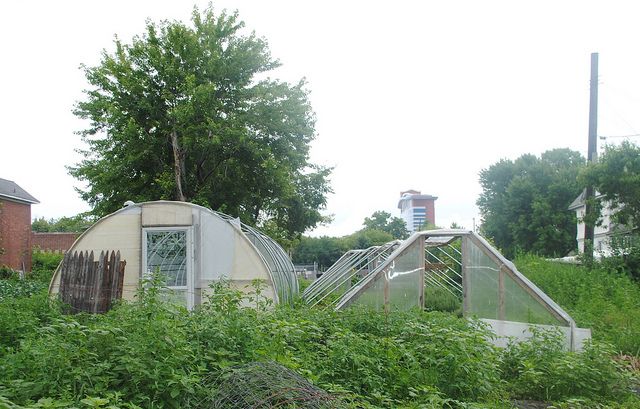 "The best way nowadays to generate change isn't by rioting or protesting, it's by creating small, socially just businesses that help create change in our world and our economic landscape," he says.

Last year, he helped create the first CSA in the city limits, providing fresh food not to wealthy suburbanites, but to young urban families living in neighborhoods deemed a food desert by national media. His approach is thoughtful, he doesn't simply pack the box with seasonal produce; he'll add a container of homemade, straight-from-the farm cilantro pesto, plum stir-fry sauce and other extras. Fast food from the farm, if you will. He hopes to make mealtime easier for his members, and more importantly, to make local, high quality food accessible to all.

"We want people to be able to get food straight from the source and help them eat as if the planet matters, as if their bodies matter."

With Detroit Dirt, he's created a facility that uses food scraps from local restaurants and turns it into compost for the area's urban, community and backyard farms, in a partnership with Canadian Pacific Rail and General Motors. Volunteers who tend the heaps receive compost in return for their labor, and he sells it on a sliding scale to customers at a hefty discount. 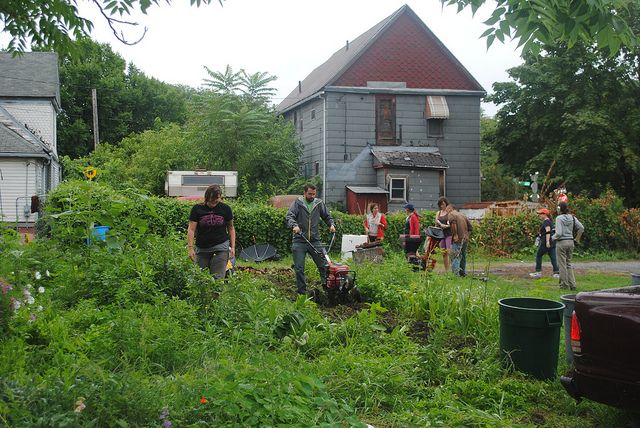 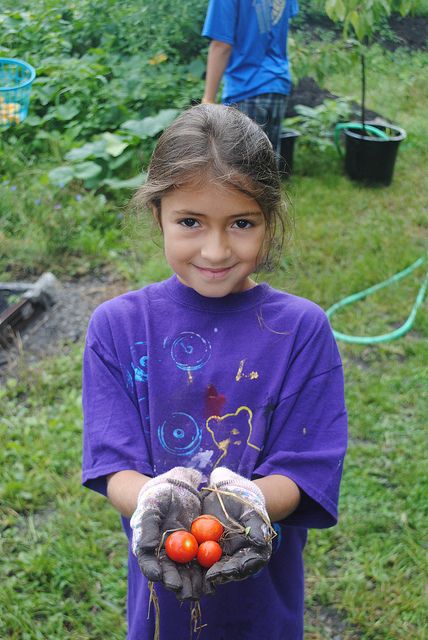 So, on a pearl-skied, gauzy mid-August day, the Food52 work crew, a.k.a. a collection of metro Detroiters, gathered to experience a day on the urban farm. Set on the famed Rosa Parks Blvd., in one of the city's oldest neighborhoods, Greg's land is unmarked, almost anonymous. When you walk the grounds, you'll see it stretches back an acre, with a patch of sunflowers here, and a bed of dahlias there. A well-groomed school sits on one side, and a sprinkling of homes surrounds the greenery.

Neatly sowed rows of broccoli, kale and herbs mingle with a tangle of zucchini, butternut squash and peas. Hoop houses in varied states of repair pop up in seemingly random fashion. A few dead trees, stripped of their leaves, stand starkly in contrast to the lushness, with trays of fresh seedlings lying nearby. The metaphor isn't lost on us.

We arrive at the farm at noon, a bit unsure of what to expect. The atmosphere is surreal, misty, thick with cool humidity. Our crew: me, my husband Wes, daughter Mary, 19, son Tim, 14, niece Sofia, 8. Also on site is our friend Julie Alvin, who discovered the Detroit Dirt project for our video event, Lisa Ludwinski, a native Detroiter and New York chef who coordinated the project, about 10 volunteers and Perennial Plate's Daniel and Mirra. 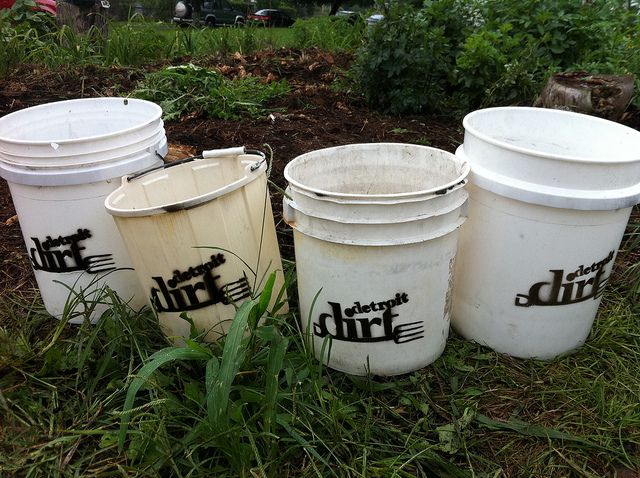 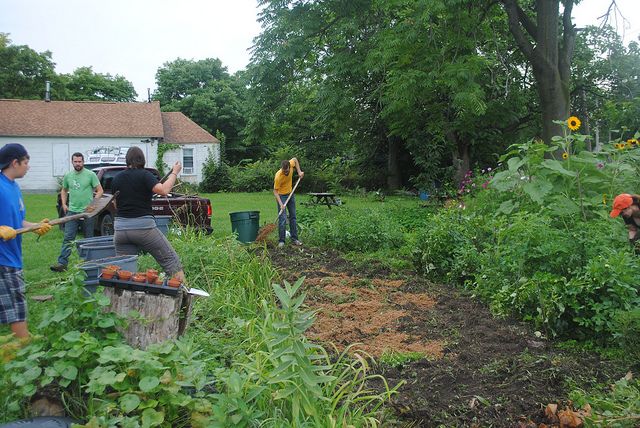 Greg welcomes us, then puts us to work weeding the rows, turning the compost heap and creating a bed of compost from locally sourced waste materials: used coffee grounds and filters from the hipster Astro Coffee Shop, hay and manure from the Detroit Zoo's rhinos and spent grain from Motor City Brewing Works. The Perennial Plate crew collected these goods the day before, filming the process.

We split into small groups and tend to our tasks. Greg moves swiftly from group to group, working alongside us, offering a few tips and answering questions. He'll stop mid-sentence, lean over and pull a sorrel leaf, a nasturtium or a pea shoot for us to taste on the spot, his eyes brightening when we experience the flavors he describes. 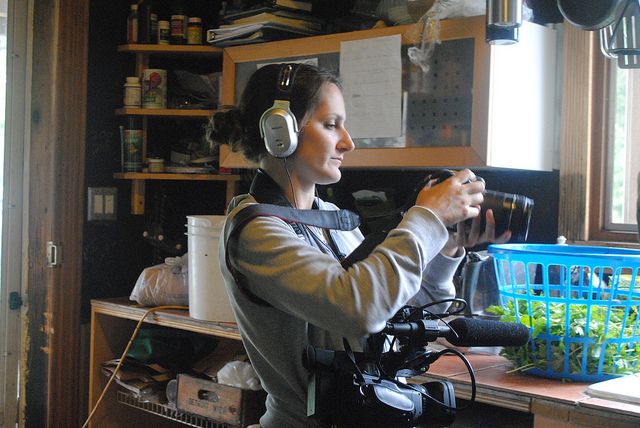 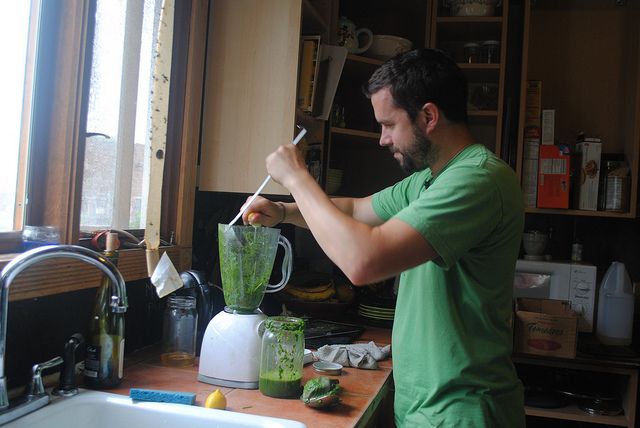 After an hour or two of farmwork, we forage for greens and other fixings, then retreat to Greg's kitchen. The house is wonderfully, authentically Detroit, with Greg's personal stamp evident throughout. Mirra films while Daniel deftly preps the produce, creating two gorgeous salads: classic tomato, extra virgin olive oil, kalamata olives, sliced almonds and herbs; and mixed greens with parmesan, sunflower seeds and nasturtiums. He buzzes a dressing of sorrel, garlic, extra virgin olive oil, salt and pepper to drizzle atop. 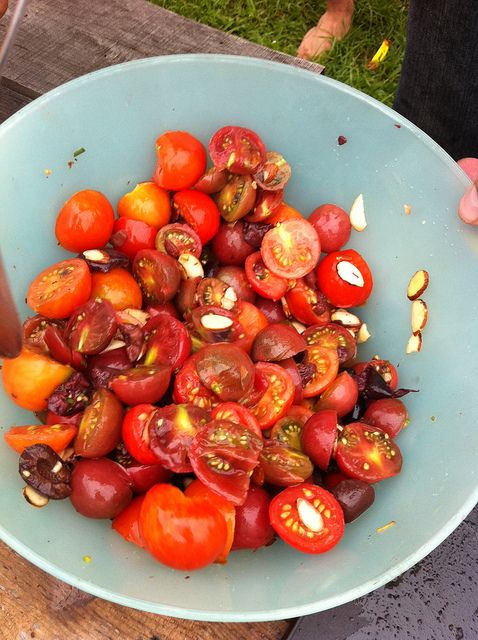 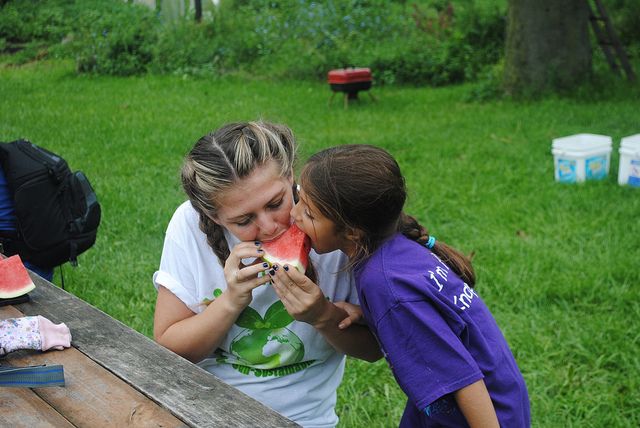 We gather around a couple of well-worn picnic tables to eat. We wish we'd thought to bring wine. Damn. The kids sample all manner of new-to-them produce: edible flowers in flaming orange, yellow and red, pea shoots, mizuna, sorrel. They devour the salads -- plate after plate -- then ask when they can come back again to work. Our hearts soar. 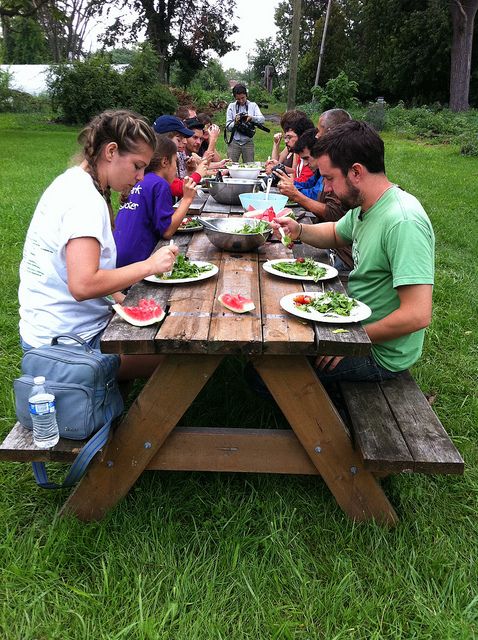 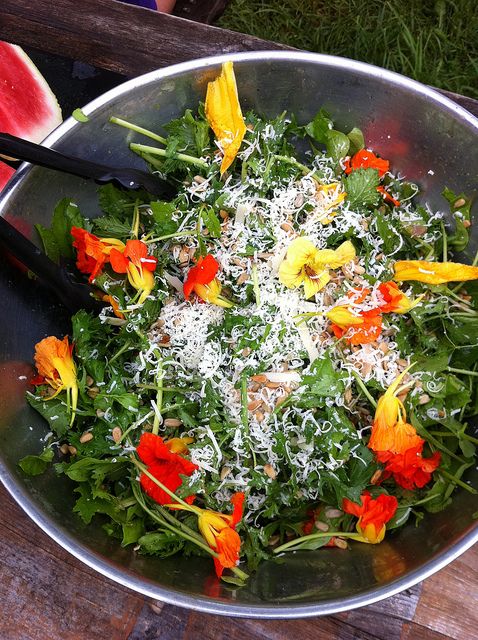 We clean up, pack up and say our goodbyes: a farmer, a film crew, an assortment of volunteers and a family, crusted with layers of dirt, sweat and mosquito bites, satisfied after a great day on the farm. Experiment: successful.

fresheatsathome.com
I'm a self-trained home cook and freelance food writer who enjoys cooking and eating seasonally and locally whenever possible. When I travel, visiting the farmers' markets, local groceries and specialty food shops is as important as the shopping, museums and restaurants. I love to immerse myself in cookbooks, then go into the kitchen and experiment; and writing about food and the chefs who cook it is my latest pursuit. By day, I'm an executive speechwriter and event planner.

STC October 5, 2011
I have a dear friend whose sister lives in the Detroit area; so inspiring to see this in an urban setting.

ashleychasesdinner October 5, 2011
What a wonderful article! I lived in metro Detroit for 10 years. So great to see this!!

drbabs October 5, 2011
What great writing, too! I felt as if I were there on the farm with you.

aargersi October 5, 2011
What a great experience, effort, and article! Love this Maria - keep them coming!

mariaraynal October 5, 2011
Thanks, Abbie, you would've loved it there.