Congratulations to this week's contest winners!

ENunn won the contest for Your Best Pancake Recipe with Lemony Cream Cheese Pancakes with Blueberries. 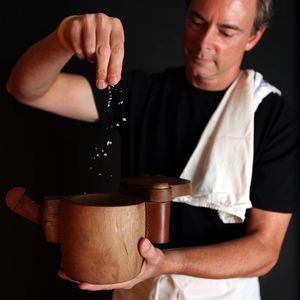 Is there a dish that you are known for among friends and family?
I don't have what you would call a signature dish, but I do get a fair amount of requests for the braised beef short-ribs that I make.

What's a food you really don't like?
Any kind of liver but foie gras makes me want to gag.

What is your favorite fall dish?
Beef Bourguignon with some hearty bread and a Cote du Rhone.

Describe your most spectacular kitchen disaster.
Years ago, when I first started to cook "seriously"  I made a shrimp and pasta dish for a visiting friend who I knew to be a gourmand.  I had pulled the recipe from a popular cooking magazine, and there was a typo in it which called for 1 cup of flour (as opposed to 1 teaspoon, or tablespoon which I suspect is what was really required) to thicken the sauce.  It seemed odd to me at the time, but I didn't yet have the kitchen confidence to trust my instinct and question the recipe, so I added the full cup of flour to the dish.  Ugh....I can still see the look on my friends' face as he graciously choked down that truly inedible meal.

What was the menu for the last dinner party you hosted?
Braised "mediterranean"lamb shanks with silky mashed potatoes, and sauteed kale with garlic and bacon.  Dessert was a Fig and Anise Clafoutis (imagine that)

Apron or no apron?
Generally no, unless I am spending a few hours in the kitchen, then I'll tie one on.

What's your favorite food-related scene in a movie?
The final dinner scene in "Big Night".

You prefer to cook:

A. during the day.

C. - Whenever, and wherever.

When it comes to tidying up, you usually:

a. clean as you cook.

b. do all the dishes once you've finished cooking

c. leave the kitchen in shambles for your spouse/roommate/kids to clean up

My wife will almost certainly raise an eyebrow of disbelief if she gets to read this, but I am a clean as I cook kind of guy.  It was one of the first lessons drilled into me when I studied at LCB, and one that I am most thankful for.  It is hard for me to cook well, or efficiently, if my "station" is not clean and organized.

Is there a dish that you are known for among friends and family?
My Ragu Bolognese (is that redundant?)--it has evolved a lot over the years from a recipe I put together using Mark Bittman and Mario Batali recipes as a guide. We're having it at my sister's house again this year over the holidays. It cooks forever, has lots of fat, including cream, and should not be eaten on a regular basis.

What's a food you really don't like?
Lima beans. They seem unripe.

What is your favorite fall dish?
It's a toss-up between Marcella Hazan's veal stew with peas or my own butternut squash risotto. And for dessert simple apple crisp, sometimes with cranberries, with whipped cream.

Describe your most spectacular kitchen disaster.
The worst thing that I've done in the kitchen is burn my hand so badly that it made my family avert their eyes, like that dinner scene in "Alien."

What was the menu for the last dinner party you hosted?
Homemade pizzas and big green salad.

Apron or no apron?
No apron. If someone would give me one that stays on and covers my arms, too, I'd wear it. A haz-mat jumpsuit might work.

What's your favorite food-related scene in a movie?
I love the end of "Big Night," when Stanley Tucci makes eggs for Marc Anthony, as the busboy, and neither of them speaks.

Pandora! Most recently I listened to the Elvis Costello station, but I also like to listen to the John Coletrane station. And I listen to Broadway showtunes, sparingly, because people will kill you for that. I often cook over the sound of sports on television, however, but that is incidental and beyond my control.

You prefer to cook:

A. during the day.

C. whenever, although I do it mostly at night.

When it comes to tidying up, you usually:

A. clean as you cook, as much as possible.

B. do all the dishes once you've finished cooking.

C. leave the kitchen in shambles for your spouse/ roommate/kids to clean.

Kelsey B. December 3, 2009
Congrats! These both look like awesome dishes!!

maggie4ewes December 2, 2009
Congratulations, we're so excited for you. Of course, the pancakes will have to be on the breakfast menu next time you're here. ME

Oui, C. December 2, 2009
This is just too cool! Congratulations to you too, Emily, and thanks to all of you who make Food52 such a fun place to be!

EmilyNunn December 2, 2009
I am so thrilled I can barely eat! But I'll manage a little something. Congratulations to Oui, Chef, too!

WinnieAb December 2, 2009
Yay! I finally picked the winners! So happy for both of you, and very excited to cook these winning recipes!

melissav December 2, 2009
Congrats! Looking forward to making both recipes. And loved that you both picked the same movie scene. PS - Oui, Chef - it would be great if you shared the recipe for the braised beef short-ribs that you mentioned!