Before sugar became married to chocolate, there was spice. Celebrated since ancient times, the combination of chocolate and spice is dark, complex and typically addictive. These shots from Your Best Chocolate & Spice skillfully convey what our tastebuds are thinking: "Give me more." 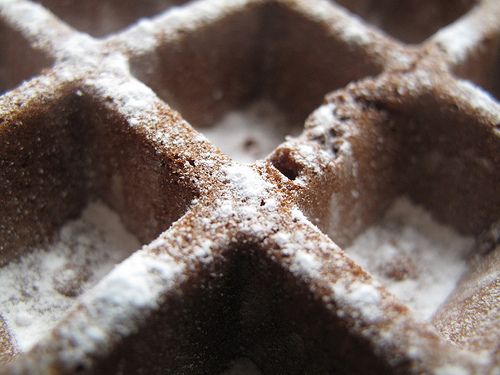 Kitchen Butterfly takes us where we really want to go – nose first into that sugar-dusted Chocolate and Cardamom Waffle. Her shot is a beautiful study in texture and contrast. Up close we get a macro glimpse of the waffle's lattice structure and the sugar collecting like snow in its deep pockets. Despite the subject's strong cross-hatch, the atmosphere of the shot is soft, thanks to a) the blanket of sugar, b) the natural light, and c) the shallow depth of field. From a central point of focus the image fades to a blur. It’s a wonderful effect, especially for this type of subject, where the the eye could easily lose interest in the symmetry and repetition. 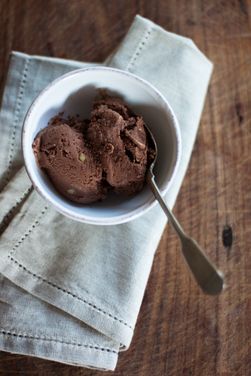 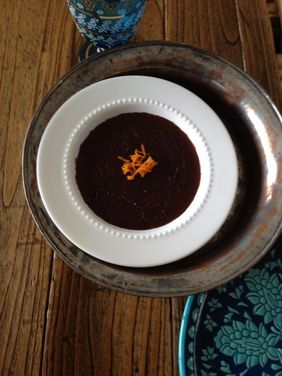 Left: Emiko demonstrates how simple a gorgeous shot of food can be. All you need is a white bowl, a utensil, a napkin, a rustic background, and Chocolate, Cardamom and Stewed Fig Gelato. The compositional arrangement of this shot is what really makes it work: the napkin -- folded naturally -- extends past the frame, a soft buffer between surface and subject; the bowl, positioned slightly above-center, allows the spoon room to protrude into the negative space below. The hue of the wood surface complements the gelato, bringing harmony to the entire composition.

Right: The combination of chocolate and spice evokes imagery of exotic places, and Mercimek’s photo of Cumin-Orange Chocolate Semolina Pudding transports us to that scene. The notes of turquoise and orange lend a foreign flair, and we feel as though we’re about to indulge at a rustic table in Morocco or Oaxaca. I love the layering effect of the pudding bowl inside the metal vessel -- it adds depth to an otherwise flat overhead shot. 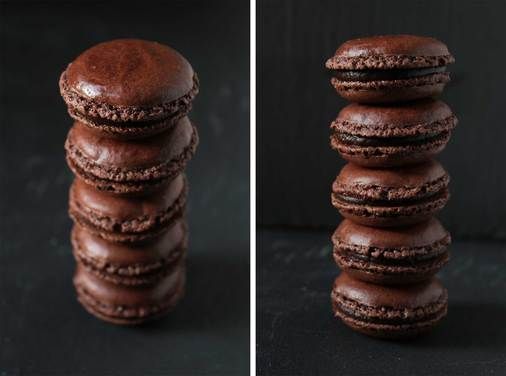 Marie-poirier shows us why certain foods benefit from certain angles. Her Tonka & Chili Chocolate Macarons--confections built around the concept of layers--certainly lend themselves to a stacked shot. She gives it to us two ways: 1) shot from an angle not-quite-overhead, focus diminishing down the stack, and 2) shot from chin-level, the whole subject in focus. In both shots, the black background sets off the macarons dramatically. A party of five stacks up well (typically odd numbers create more interesting compositions than even), but we'll take any number of those spicy-sweet confections. 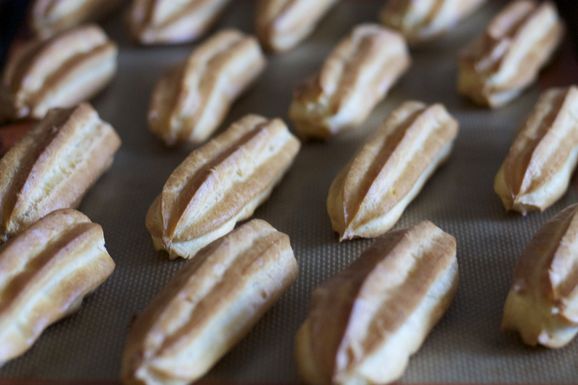 Sugarmountaintreats presents a poised army of Churro-Inspired Eclairs with Spicy Chocolate Pastry Cream in this shot. I love that it’s the second row of éclairs that gets the focus -- our eye hurdles the front line to the middle ranks, while fully aware that the surrounding squad may extend indefinitely. The angle she takes is really interesting -- it shows off the textural ridges of the éclairs as they emerge from the oven. It's like an arsenal of little torpedoes lined up for release -- yum.

Meatballs&Milkshakes March 15, 2012
Thank you! This is such a wonderful article and I'm always trying to learn how to make my shots more interesting. Thanks again for all the tips!

Kitchen B. March 7, 2012
I have MISSEd Feast your eyes. Don't tire of hearing me say it but food52 - all of you, ROCK. SOLID. I love that I not only learn to cook but I learn to improve and understand my photography and to write better. I am inspired by the multitude of stories I read here! Thank you again.

carol_tanenbaum March 6, 2012
As both cook, and photographer, I really enjoyed these. Can't wait to try the recipes. Thanks!

carol_tanenbaum March 6, 2012
As both cook, and photographer, I really enjoyed these. Can't wait to try the recipes. Thanks!

Dabblings March 6, 2012
Everybody did such a fantastic job. When I'm done with my no sugar thing I'll be trying some of these recipes out for sure!