AntoniaJames won this week's contest for Your Best Bean Dish with Lentil and Sausage Soup for a Cold Winter's Night. 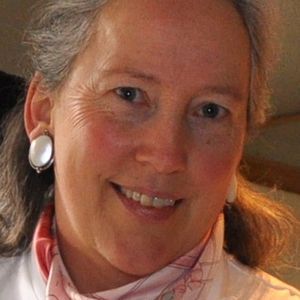 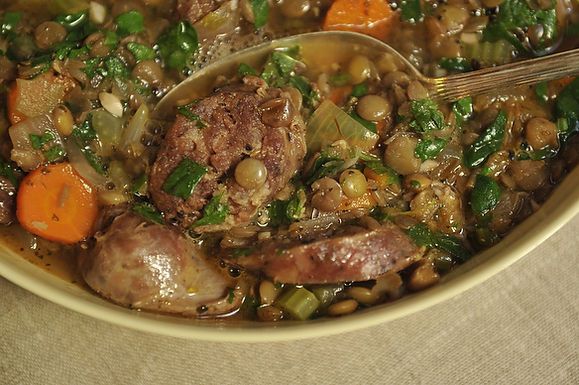 Deensiebat won this week's contest for Your Best New Year's Resolution Dish with One Pot Kale and Quinoa Pilaf. 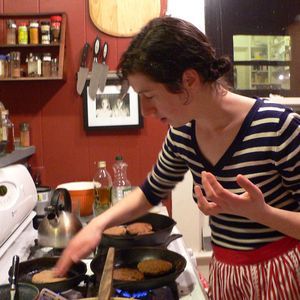 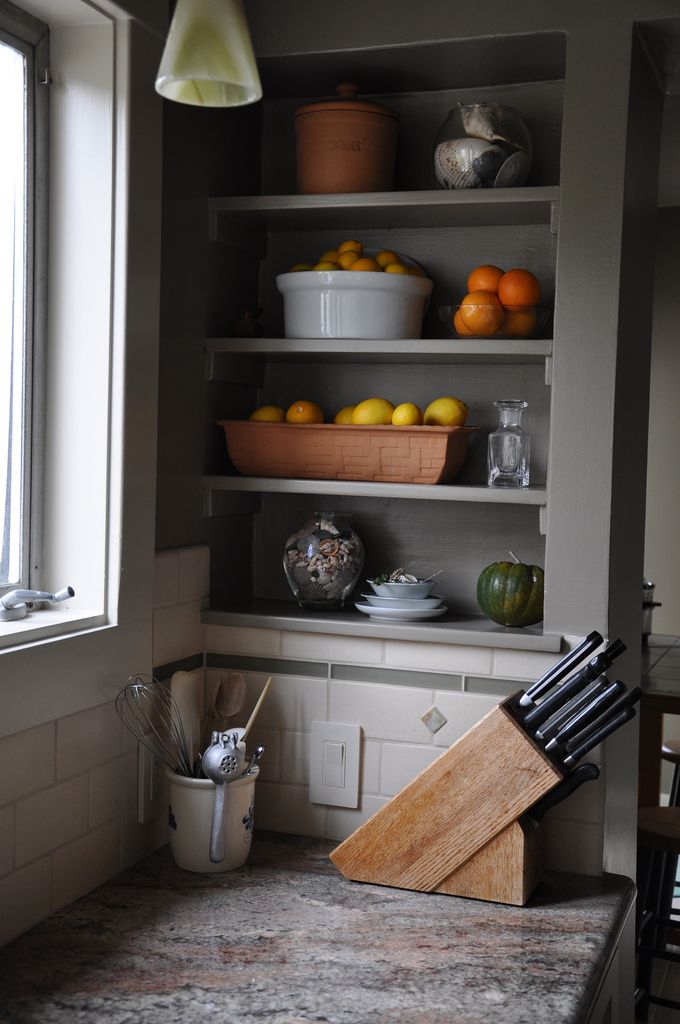 My parents designed and built their kitchen with a raised counter behind the stove, over which we kids watched everything my mother cooked, and talked to her while she was preparing our meals. She’s an amazing cook. Beef Burgundy, Coq au Vin, Quiche Lorraine and Cassoulet were standard fare. I learned a lot from her, too, by serving as her sous chef, preparing for the fabulous dinner parties she and my father often threw.

An apple pie that I made for my sons on New Year’s Day.  We used tart apples and the crumble topping in Amreen’s Sweet Potato Crumble recipe (modified a bit, of course). Scrumptious!!

Years ago, someone half-jokingly gave me a potholder that had printed on it, “Dinner will be ready when the smoke alarm goes off.” I had to stop using it within about six months, however, because it had too many holes burned through it. That pretty much sums up all of my kitchen disasters . . .some spectacular, some less so.

Apron or no apron? Always a jacket, unless it is uncomfortably hot (rare here in the SF Bay Area); then, I wear an apron. Look at my jackets some time, and you’ll understand why!!

What's your favorite food-related scene in a movie? Last week, I would have said, the diner scene in “When Harry Met Sally,” when the Sally character orders a piece of pie à la mode, with detailed instructions similar to the kind of requests I sometimes make. But then I recently saw “It’s Complicated.” The scene in which Ms. Streep and Mr. Martin make croissants in her bakery, in the middle of the night, is priceless.

Laurie Colwin, because (a) I know I could just cook something that I really love to cook and eat, and she’d love it, too; and (b) more importantly, I’d give anything to have a meal and to talk about food, and food experiences, with Colwin.

You prefer to cook: a. alone, b. with others, c. it depends on your mood

C, with a caveat: No matter what my mood is, please don’t discuss business or the details of travel plans with me while I’m working in the kitchen!

When it comes to tidying up, you usually: a. clean as you cook. b. do all the dishes once you've finished cooking. c. leave the kitchen a shambles for your spouse/roommate/kids to clean.

Most nights, it’s a bit of all three–I clean as much as possible while cooking, but won’t sacrifice efficiency for that. If I have time, I’ll tidy up as much as I can once my cooking activities are substantially finished; whatever is left, Mr. T and/or the boys cheerfully finish. Aren’t I lucky?! 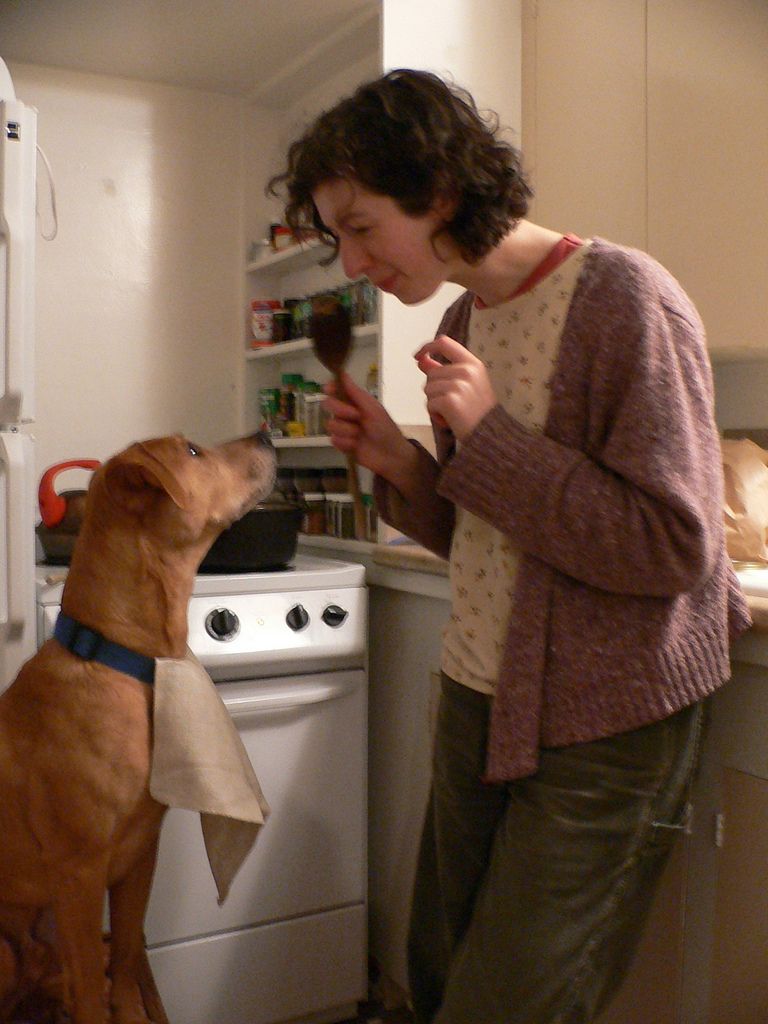 (Deensiebat readying her dog for a proper dinner)

In high school I worked at a neighborhood bakery/cafe that turned out squishy whole wheat sandwich bread and buttery chocolate chip cookies. Baking at night involved learning the secrets of gluten, singing along to good music, talking about life and sex with my older and more worldly co-workers and making pizzas out of bits of french bread dough topped with whatever we could find in the coolers. Christmas parties involved happy people picking up their pies and happy workers drinking toddies and exchanging presents in the kitchen. I stupidly thought that that's what life was like at any grown-up job. I haven't yet found a job that works like that, but I try to recreate the food and feeling in my home kitchen.

This year's a bit too new to be representative–perhaps a North African halibut and couscous. Last year I'd say some dinners I cooked with a visiting Basque friend. And an excellent batch of rhubarb liqueur (probably excellent because I actually let it age and mellow, instead of slurping it down one week out).

Too many to count. I tend to think I'm too cool for a timer, with the expected results.

Usually my clothes are so stained that it doesn't matter. But sometimes yes, to feel like a Real Professional Cook (or Saucy 1950s Cook, depending upon the apron).

It depends what I'm craving: "In the Mood for Love," "Big Deal on Madonna Street," "La Grande Bouffe," etc. Although generally I get hungry for whatever someone's eating on screen.

It's hard to choose just one! The beauty of dinner is that you get to have it every night.

You prefer to cook: a. alone b. with others c. it depends on your mood.

d. It depends on the others.

10. When it comes to tidying up, you usually: a. clean as you cook. b. do all the dishes once you've finished cooking. c. leave the kitchen a shambles for your spouse/roommate/kids to clean.

Maria T. January 17, 2010
Congratulations to both Antonia and Deensiebat and also to the wild card winner! The recipes are great, your answers very interesting and great fun to read about both of you.

Kelsey B. January 16, 2010
Congratulations ladies! Antonia, I love your answers - I am a Laurie Colwin devotee as well. These are both great recipes!

AntoniaJames January 14, 2010
Thank you, everyone. I'm speechless, and honored to be among all of you. ;o)

EmilyNunn January 14, 2010
Congratulations, you two--you're both terrific, and I can't wait to make these dishes. I'm going to have to put another refrigerator in our apartment and take out a closet to make a pantry.

MrsWheelbarrow January 14, 2010
Hearty congratulations to both winners and runners up. Wonderful recipes to kick of 2010!

TheWimpyVegetarian January 13, 2010
Congrats to both of you! And I love both of your answers re: the questionnaire.

TasteFood January 13, 2010
Congratulations to the winners and the runners-up who created 4 great recipes!

dymnyno January 13, 2010
CONGRATULATIONS TO YOU BOTH. Thanks for great inspiration. Thanks for your wonderful recipes (all of them).

lastnightsdinner January 13, 2010
Congratulations to this week's winners, and to the runners-up as well!