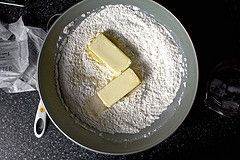 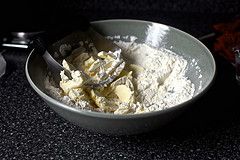 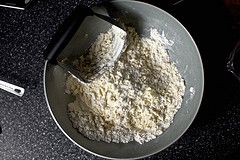 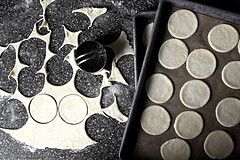 Presenting Pearls of Wisdom -- in conjunction with FOOD52's Recipe Writing Week, we'll be bringing you pro tips from the food world's best chefs and writers. Stay tuned for more every day this week.

You'd be hard-pressed to find a food lover who doesn't nuture a crush on Deb Perelman, the cook and blogger behind the wildly popular Smitten Kitchen. With her first cookbook coming out in just a few months, she jotted down a few of her best recipe writing pointers. Her secret? Pretend like you're describing a recipe to your best friend.

We love that she also addresses her philosophy towards photographing her cooking process. Shutter-snappers, take notice:

1. You're allowed to sound like yourself: I often read recipes that sound very serious, like the voice we imagine professionals would have. But I think of home cooking as a conversational thing, conversations about transforming whole ingredients into tasty dishes, or more concretely, how to put dinner on the table. People have been having these conversations since the beginning of time, long before there were professionals who systematized recipes.

2. Pretend you're talking on the phone to your best friend: When I write a recipe, I really try to speak to the person making it that way I would, you know, speak to you. Well, I admit in my head it has more retro sensibility. I picture the yellow phone my parents used to have on their kitchen wall, back when people communicated things over phones, and those phones had cords and the phone in the kitchen had a longer cord so you could cook dinner while you friend walked you through the steps. But I guess that's neither here nor there.

3. Consider all the things you'd warn a friend about: If you were talking to your friend over the phone about how to make pie dough in real time, you wouldn't be overly austere. You wouldn't admonish them for having no patience for pie weights. And you'd say things that maybe don't make it into recipes in magazines and classic cookbooks, like, "Ugh, butter is really a pain to cut into cubes, I know, because the pieces always want to stick to each other," and "You're going to start cursing me right now because you'll think I've led you astray because no way is this mess going to become a pie dough but trust me, just knead it a couple times and itwill come together." You'd explain everything. You'd make fun of the some of the ridiculous things cooking requires.

4. Edit down the chattiness, but keep the details that inspire confidence: There are usually way more little tidbits than any reasonable recipe could fit, so in subsequent edits I try to trim away the overly chatty parts (I, um, talk too much in person too) and keep the parts in that I think are essential to soothe the frazzled nerves of someone making something for the first time. Here's one about the importance of keeping pie dough cold at all times, and I left it in because I remember acutely how flustered I used to feel when I thought I was doing everything right, but my pie dough got harder and harder to handle:

"Soft dough … will also annoy you and make you think that you're bad at working with pie dough but you're not. You're just warm-blooded and you need to put the pie dough back to chill for two minutes." (Apple Pie Cookies)

5. You don't have to photograph everything: On Smitten Kitchen, I like to give people the impression that I'm sharing step-by-step photos while, in fact, only sharing tiny snippets, often less than 10 percent of what the recipe entailed. I do this for space considerations but also my own selfish reasons -- I get bored of editing endless variations on photos of chopped onions and I'm not dedicated enough to take photos of each process. Instead -- again, selfishly -- I take pictures of whatever I feel like that day, whatever strikes me as pretty or curiously textured or having cool light on it or even looks strange, like dried spaghetti that stops looking like dried spaghetti from a weird angle.

I think it works -- most of the time, though there have definitely been times when a picture of the cake's crumb would have been very helpful to have -- because even if you don't show the whole cooking reel, these real splices of stuff however it lands in your messy kitchen, on your busted up old cutting board, with the bowl of cherries you were snacking on as you cooked in the background, looks like real life because it is real life. And this unapologetic representation of real life isn't something you're ever going see in styled shots from a studio, even if they remember to add some cake crumbs or a messy knife to the set. But it is exactly what your readers kitchens look like at home, and I think they take note. I hope seeing a real, imperfect kitchen inspires confidence.

Tomorrow we'll be sending off our Pearls of Wisdom miniseries with a bang with two fantastic contributions -- one from Aki Kamozawa & H. Alexander Talbot, who you know from Ideas in Food, and one from cookbook author Patricia Wells, whose iPhone app for Parisian food we covered recently. See you then!

If you're just catching up on Pearls of Wisdom, don't miss advice from Ruth Reichl, JJ Goode, Rose Levy Beranbaum, and Charlotte Druckman.