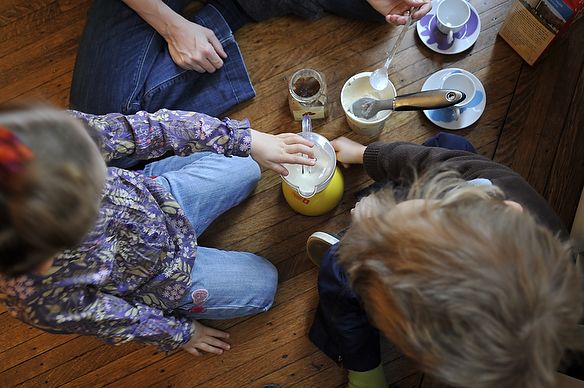 This past Christmas, “Santa” brought my 3-1/2-year-old twins a battery-operated blender (apparently fashioned by his elves at Amazon.com). Bright yellow with a plastic “blade,” it whirred along excitedly when I added some dried beans to the container – whap! whap! whap! And for a few days this entertained my kids with occasional bursts of loud fun (and beans ending up in the strangest places.)

About a week ago, I decided it was time to take the dried-bean training wheels off the blender and put it to work in the kitchen: it was time for milkshakes! We set the blender on the floor. I pulled out some salted caramel ice cream I had in the freezer, some milk and some breakable Illy espresso cups I’d had for years thinking they’d be perfect for when we had children (until I actually had children, saw how often their cups plunged to the floor, and decided to let the cups sit in the cabinet for a few more years).

Together Walker, Addie and I scooped the ice cream, poured the milk, put on the lid, and then turned on the little plastic blender-that-could. It chugged and struggled and whirred and in a few moments the lumps of ice cream began to slowly unmoor from the sides of the container. Without a blade, the “blade” swished the ice cream until it broke down and the blender filled up with slushy foam. It never occurred to me that you could make a milkshake without intensely blending the ingredients. But it turns out that all you really need to do is emulsify the milk and ice cream until they achieve a texture that’s not quite milky and not quite solid but “ploppy” as I explained to my kids. We watched the mixture spin and checked the ploppiness factor and when it was just right, poured the milkshake into the thimble-sized cups. My kids brought the cups to their lips and didn’t pause until they were emptied.

The milkshakes have since become a nightly ritual (which means, for me, a 7 pm milkshake aperitif has replaced the Lillet or scotch -- but things could be worse). When we ran out of caramel ice cream we made vanilla shakes, flavored with a few spoonfuls of chestnut spread. And when we ran out of that we whipped up a banana and nutmeg frappe (with milk and ice rather than ice cream). Walker and Addie have begun to discuss the ingredients and wonder about the process. And how lucky for them that a world of lassis, smoothies and floats still lies ahead.

There is no need for a recipe for milkshakes. All you do is add 1 large scoop of ice cream per person. Drop the scoops into the blender and add enough milk to almost cover the scoops. Turn on the blender -– bbrrrrrrrrr! Done!

Recipe adapted from Nicole Kaplan at Eleven Madison Park in New York City; it originally appeared in the New York Times on October 8, 2006 in an article by Christine Muhlke.

1. Place 3/4 cup sugar and the corn syrup in a heavy-bottomed saucepan. Do not stir. Cook over medium-high heat to a dark caramel, swirling as it begins to brown to distribute the sugar. Deglaze with the cream; then slowly add the milk. The caramel will harden. Bring to a boil, then simmer, stirring, just until the caramel has dissolved. 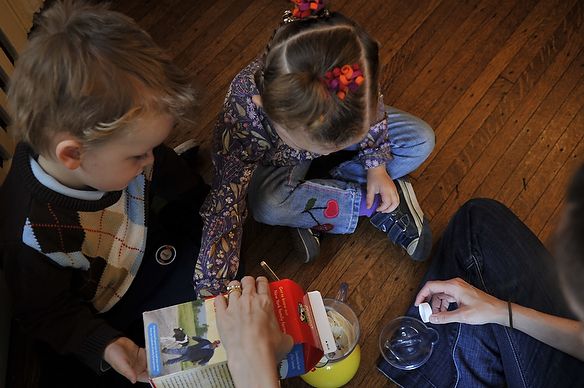 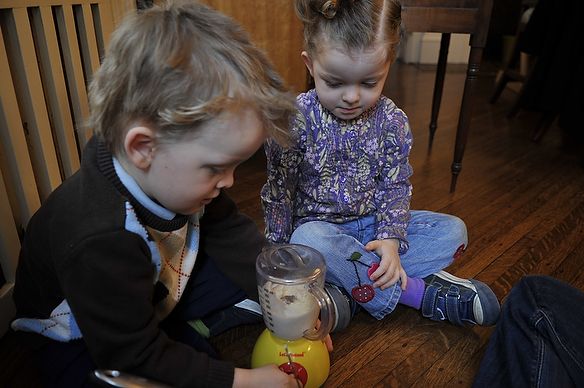 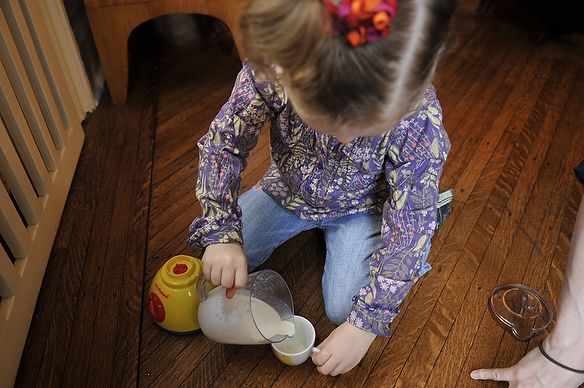 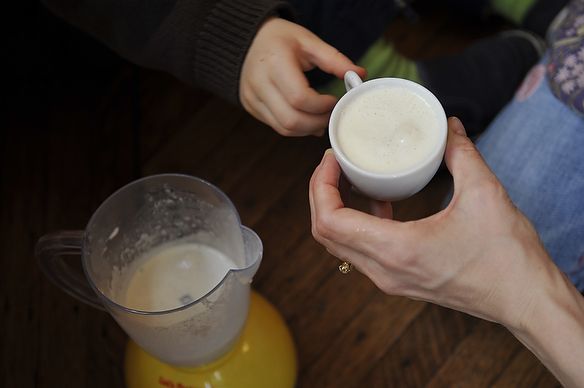 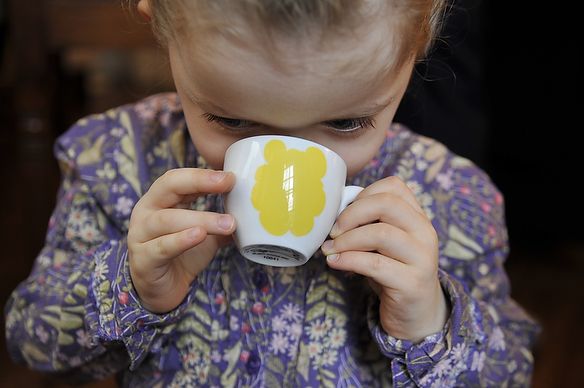 QueenOfGreen January 27, 2010
Is there an ice cream maker you'd recommend? After reading your vows out of "Cooking for Mr. Latte" I understand you're a professional ice cream eater, so I figure you ought to have an idea of where I can start!

Allison C. January 27, 2010
OK, clearly I am not Amanda, but I make and eat a LOT of ice cream myself, so I thought I'd chime in with my two cents. I have a Donvier ice cream/sorbet maker, and I love it. I'm not sure what the model number is, but I don't think you can go wrong with one of these.

Amanda H. January 28, 2010
I have a Simac Gelataio, which I love. And I used to have the Cuisinart ice cream maker, which does a good job for a lightweight and inexpensive machine.

Second, this brought back a memory I hadn't thought about in years - when my son (now a college senior, yikes!) was in kindergarten, his teacher asked parents to do short demonstrations for the class. Sounds simple, but this was in a college town, where many of the parents were professors (seriously, I always felt like I was the only one at the PTO meeting without a MacArthur Genius Grant.) Anyway, after weeks of hearing about amazing junior science experiment demos, and fully illustrated power pt presentations about art and solar systems, and....it was my turn. Daunted, I decided to simply do something that wow'd my own kids - I brought in my blender, milk, ice cream, cartoon character paper cups....and voila, custom milkshakes were had by all. Ironically, my son later told me that our silly little demo had been voted the class favorite. Go figure.

Oh and one tip - try using peeled, frozen bananas when you make the frappes. Makes them extra frothy and delicious. (For adults, a hit of coffee ice cream, or coffee liqueur, or even instant espresso powder is really good with the bananas too.)

Amanda H. January 28, 2010
Great story -- and thanks for the frozen banana tip. Will put a few in the freezer tonight.

Amanda H. January 25, 2010
Hey Paula! Great to see you here. Talk about insanely cute, everyone should look at your profile photo!

judy S. January 25, 2010
Amanda - finally figured out how to navigate your website - I'm a novice - your kids are treasures and what a grand idea to involve them with milkshakes (the start of twin sous chefs) - I see a childrens cookbook in the crystal ball! Uncle Lou and I send our love

Sally January 24, 2010
Amanda, Cute overload indeed! I am sighing deeply remembering times with with my son (now 20, how did THAT happen?) in the kitchen. One of his favorite activities was "washing dishes," decked in a plastic apron and pouring soapy water everywhere, but mostly in the sink, singing. Too bad it didn't last. But those were terrific bonding moments. His interest in actually cooking as he got older was nil. Until he left home. Go figure! But he's catching up. Thanks for sharing (sob) your cutie pies with us.

Amanda H. January 25, 2010
Thanks Sally -- you've just given me the idea to start a cooking journal of the recipes I make with them.

AntoniaJames January 26, 2010
Do it in the form of a letter to each of the children, with comments on what you tried, suggestions they made, their reactions and likes/dislikes, and put the letters in a file until they are older. (I wrote a 2-page letter to each of my sons every month for years starting when my youngest was a toddler, describing them, the things they liked, what we were doing, etc. It's one of the nicest things I ever did for them.)

Amanda H. January 28, 2010
Antonia that's a great idea. We keep a diary but are less disciplined about regular entries. And since they're twins, we'll need to eventually duplicate the diary so they can each have a copy. That's a project for a later day....

GoodFoodie January 24, 2010
And I could only justify having a milkshake when I was pregnant. I think I'll have to revisit that logic - with my kids!

shayma January 24, 2010
what darlings! amanda your daughter looks exactly like you. what a fun thing to do with your kids. a little milkshake party. best wishes, shayma

Allison C. January 24, 2010
This is wonderful. I love doing things in the kitchen with my son, and we both love to make ice cream (licorice was the most recent, from Claudia Fleming's Last Course book)--but for some reason I cannot fathom, we have not made milkshakes. Ridiculous. Thank you for sharing this glimpse of family life and giving me the next idea to tempt my son into the kitchen with me. (The brown sugar ice cream sounds amazing, too.)

Amanda H. January 25, 2010
Now, I'm thinking maybe I should make ice cream with them so they understand the whole milkshake process. (Although I guess then we'd need to go to a farm and milk cows -- a field trip for next summer maybe.)

WinnieAb January 24, 2010
Amanda,
Your kiddies look sooo much like you!
They are so sweet and the salted caramel milkshake sounds fantastic!

LetMeEatCake January 24, 2010
i love this! your little ones are so adorable, they look just like you! milkshake party is better than a tea party any day!

Amanda H. January 25, 2010
We haven't done a tea party yet but we have had hot chocolate parties, which usually end with them running around like maniacs from all the sugar.

mrslarkin January 24, 2010
What great little sous-chefs you have! Thanks for this - made my weekend. Very timely too...I need to come up with a recipe for Nutella Frappe for sconegirl's 8th grade Italian class.

Annelle January 24, 2010
This is precious! The perfect 'tea' party, made better by milk shakes. And beautiful kids! Sweet, sweet, sweet...

Jennifer A. January 24, 2010
How did I forget about milkshakes?? I haven't had one in years - thanks for the reminder (the recipe sounds fantastic). And the photos are adorable - your daughter's raised pinkie in the last shot is precious.

Maria T. January 23, 2010
Absolutely wonderful children and pictures. Lovely to see mum and childern play like this and share cooking together. I think moments like this stay in your heart forever. I know in the States you make milkshakes with ice-cream, whilst here in Europe we make them with milk and fresh fruit. Give it a try - banana, strawberries, a little honey and milk. Whizz until it's full of bubbles of air, pour it in their cup and just watch them having little pink whiskers left, so cute!

AntoniaJames January 23, 2010
Oh, the velcro-strapped shoes! Been such a long time since we've had any of those around here. My favorite photo is of Miss A pouring . . . such care and concentration. What a wonderful age. Thanks for posting this.

Rhonda35 January 22, 2010
OMG - two of my favorite kiddies looking as sweet as their shakes! Addie's hairdo is adorable - when do you have time for that?! I like Walker's curly wisps, too. Tell the munchkins that Auntie Rhonda likes strawberry shakes and we'll whip some up next time I see them. xo

Savour January 22, 2010
This is just darling! My own munchkin (a year younger than Walker and Addie) loves to help mom with "cooking" -- usually by putting plastic things in the oven when I'm not looking.

SarahS January 22, 2010
Addie & Walker are two sweet perks of this already sweet gig.. looking at this I realize I never got to taste the milkshake! Time to invest in a blender.

Kelsey B. January 22, 2010
What a great tradition, the fun you will have with all of the flavor possibilities! We love any kind of ice-cream or cold dessert in our house, I'm sure my daughter would be thrilled if we started doing this more often. They look very chic drinking out of the espresso cups!