Amanda and Merrill Share Their Kitchen Essentials with Ebay's Inside Source 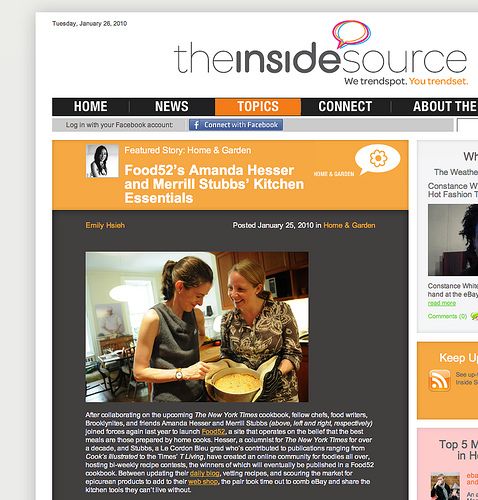 "After collaborating on the upcoming The New York Times cookbook, fellow chefs, food writers, Brooklynites, and friends Amanda Hesser and Merrill Stubbs (above, left and right, respectively)joined forces again last year to launch Food52, a site that operates on the belief that the best meals are those prepared by home cooks. Hesser, a columnist for The New York Times for over a decade, and Stubbs, a Le Cordon Bleu grad who’s contributed to publications ranging fromCook’s Illustrated to the Times’ T Living, have created an online community for foodies all over, hosting bi-weekly recipe contests, the winners of which will eventually be published in a Food52 cookbook. Between updating their daily blog, vetting recipes, and scouring the market for epicurean products to add to their web shop, the pair took time out to comb eBay and share the kitchen tools they can’t live without."