This week, she tackles yogurt. Which is not as simple as it sounds. 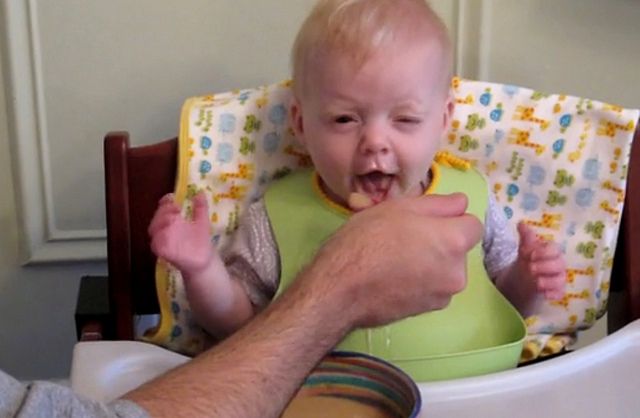 As I mentioned last time, our pediatrician told us we shouldn't give Clara cow's milk until she's at least one. But apparently stuff made from cow's milk -- if you culture it, for example, or turn it into cheese -- is fine. Go figure. I don't know the science behind this, nor can I say really care. I come from a long line of dairy freaks, so this was straight-up good news.

Cottage cheese, a particular favorite in my family (did I mention that I have a husband who can't stand cheese? It was the one serious concern I had before I married him.), made it into Clara's breakfast routine early on. Soon we were ready to try yogurt.

I'd been buying organic cottage cheese without guilt, but once I started checking out yogurt labels, I found I wasn't thrilled at the prospect of feeding Clara one of the commercial "baby-friendly" varieties. (Have you seen how much sugar there is in that stuff?) So I pulled my yogurt maker out of the closet. Last year, I wrote about how easy it is to make your own yogurt, and I have one of these to make it even simpler. You just heat up some milk, add starter, pour it into cute little pots and leave the yogurt to gestate overnight. 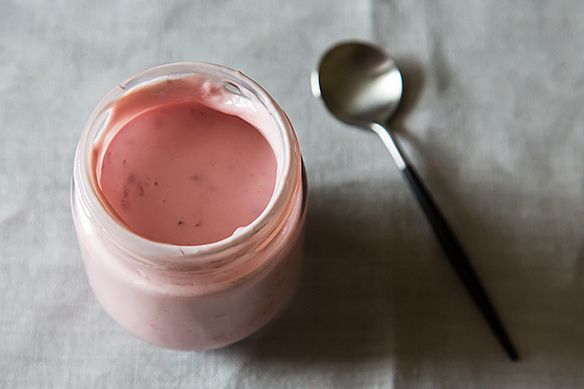 I confess I felt a small thrill of self-satisfaction knowing I'd actually made yogurt for my child. I mean, how lucky was she? That thrill died when I tried to get her to eat it. When I tasted the yogurt, I'd found it pleasantly tangy and rich -- better than store-bought for sure. Clara did not appear to agree. After the first dab hit her tongue, she screwed up her little nose and pressed her lips together like a vise. Our first yogurt tasting was a total failure. As was our second. When she rejected it a third time, I realized it was time to face facts. My kid wasn't going to eat this yogurt as-is.

Rooting around in the fridge, I found some stewed blackberries I'd made the week before from some squashed berries that had fallen victim to some of the heavier produce in my farmers market bag. I strained some of the berries and their juice into the yogurt and tasted it. Tasty, but maybe even more tart than before. I needed something liquid and sweet, and I wasn't supposed to add honey. I spied a bottle of maple syrup and dribbled a little bit into the yogurt. I stirred and tasted again. Then I thought, "If my child doesn't appreciate this damned yogurt, then she's no child of mine."

This story has a happy ending (if it didn't, would I really be telling it?): Clara now loves yogurt. She still makes wonderful funny faces at the tartness, but now she opens her mouth for more before she's swallowed the last bite. I've made raspberry, peach, and blueberry yogurt, always cooking the fruit down with just a sprinkle of raw sugar to coax out the juices, and then sweetening the yogurt itself with a little maple syrup. If I run out of my own plain yogurt, I buy a plain, organic whole-milk variety and mix in the fruit and maple syrup. And I plan to freeze plenty of fruit purees now (more on freezing another week). That way, I can feed Clara homemade fruit yogurt all winter.

I haven't measured how many grams of sugar are in a serving of my homemade yogurt, and I don't plan to. If it's the same as the store-bought kind I initially rejected, well, I figure ignorance is bliss. 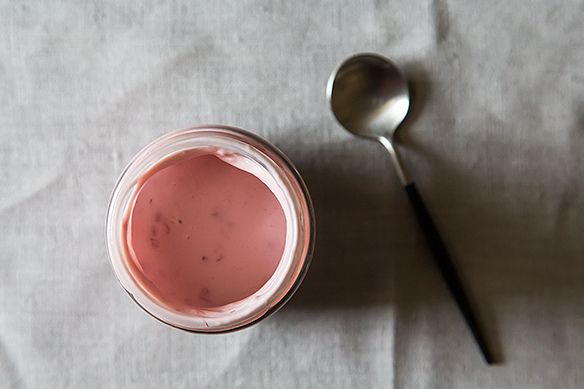 tjioe_chi November 8, 2012
I make homemade Greek yogurt for my son all the time w/o a yogurt maker. I heat the milk up to 180F, turn off the heat and let it cool to 110F to 120F (about 45 mins). Whisk in some yogurt (either store bought, or from your previous batch). I usually mix 2 tbs of yogurt per 2 cups of milk. Then place it in my oven's warming drawer on for a few hours (you can use anything that can keep warm for a while, e.g. your oven.
To make it Greek yogurt, you need to strain it. I place a cheese cloth over a sieve, pour my yogurt into the sieve and let it strain in my fridge. Normally I save the whey to cook grains in so he has extra protein in his grains.

softenbrownsugar October 10, 2012
Oh those facial expressions are priceless! On the old 8mm home movies my Dad used to take, the clarity was so scratchy, we could hardly figure out which one of us was being filmed! This is truly beautiful, and Clara and her Mom and Dad ;) will be able to enjoy these for years. Yay for Yogurt!

Julie51 October 7, 2012
Can you make a soy yogurt? I have an electric yogurt maker, but I do not want to use cows milk.
Do you have any suggestions?

tamater S. October 11, 2012
I've heard that goat's milk is good because the fat globules are 9 times smaller than those in cows milk.

Jian October 7, 2012
She's hilarious! Every time her cute little face screws up, I just burst out laughing. I needed a good solid couple of minutes of hysterical laughing today.

TurkeyGoddess October 7, 2012
I was going to "ditto" Kristy, but Amanda beat me to it! Love the squinting. She's my little pumpkin! xoxoxo

Rhonda35 October 7, 2012
Awww...I miss those days, Merrill! The funny faces and excited hand motions are the best - much more fun than the scrunched up noses and definitive "Gross!" of an older child. One of Luke's first words was "More!" which always made us laugh - there was never enough salmon or raspberries for him.
If you don't always want to use fruit - try mixing the yogurt with a sweet-ish veggie - sweet potato, carrot, beets.
Clara is such a cutie - just like my niece and nephew - you Brooklynites do babies right! xo

Gail H. October 7, 2012
My guess for the 'no cow's milk before age 1' edict would be the lactose content. By culturing the milk, you reduce the lactose dramatically. If you culture your yogurt for 24 hours you virtually eliminate the lactose, making it safe even for people on the Specific Carbohydrate Diet.

Little Clara is a lucky (and ADORABLE) baby!

douglasalan October 7, 2012
WHere do you find yogurt starter? Please advise
Thanks!

NeoHomesteading October 7, 2012
You can buy it from cultures for life or even amazon. I found some at Wegmans once, some well stocked grocers carry it now.

tamater S. October 11, 2012
Any health food store worth it's salt will have it, refridgerated. Also Kefir culture. Check your Best Before Dates.

NeoHomesteading October 7, 2012
Those expressions are priceless! I love homemade raw yogurt but it always comes out too thin. I have tried all the tricks and accidentally fell into making kefir. What a god send!

My older one Clare, yep, just like Clara, but with E instead.....
Clare started her solids with that green bib too...

arielleclementine October 3, 2012
ha! loved this! excited to try your recipe too!
Author Comment

Jennifer A. October 2, 2012
Oh! Can you hear me laughing?? A perfect visual study of the wonderful development of flavors (the tartness really does only seem to poke in at the end). Clara is absolutely adorable! (thanks too for the recipe :))
Author Comment

Jennifer A. October 5, 2012
Okay . . . now my stomach really hurts from laughing too much. Although, I confess, I am not a professional reader of lips, I think baby 9 or 10 may have said something like 'fudge!' just after the lemon bite.

glossary note: the reference to 'fudge!' is in the way I remember my mother exclaiming it in the 70s; 'sugar!' was her second best back then . . . and it never ended in dessert for anyone.

mariaraynal October 2, 2012
Oh my ... those eyes, those little hands and those faces! Cuter than cute.
Author Comment

LauriL October 2, 2012
Clara's reactions to your mom-made yogurt threw me back to when Kenzi was "forced" to try all my loving attempts at food experimentation!!!! Obviously she survived!! LOL!

Kenzi W. October 3, 2012
Ha, but not without a few stories to tell, right? You never made me yogurt, did you? Yogurt equals love, mom.
Author Comment

Merrill S. October 3, 2012
She certainly has an advanced palate these days!

Bevi October 2, 2012
What a honey doll Clara is! Those faces are too much!
Author Comment

PistachioDoughnut October 2, 2012
Oh my god..Clara is so cute...i love how she makes faces and still want to have it...did she say yumm at the end...another way i like to set yogurt is in unglazed earthen mini pots, they give a nice earthy tasty...
Author Comment

Merrill S. October 3, 2012
I bet they look beautiful in those pots!