Big Feast for Sandy Relief: A Day in the Kitchen

This week, we're shopping and cooking for a soup kitchen that is dedicated to Sandy relief. 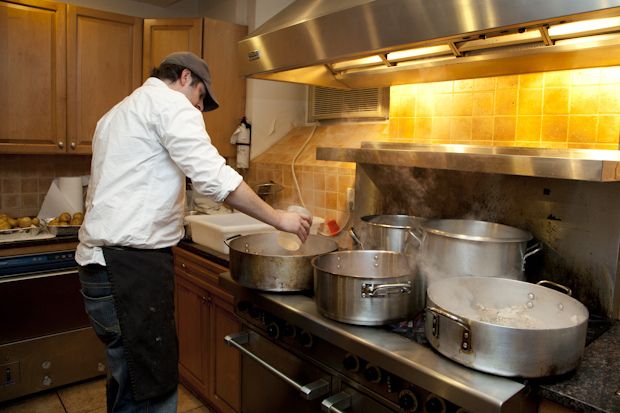 Day two of this Big Feast installation was spent at the Bay Ridge Cares Kitchen, preparing food and learning a lesson in superhuman volunteerism. After Whole Foods generously offered to deliver the $2,500 worth of groceries that we (alongside Alison Robicelli) had purchased the previous day, all we needed to do was get ourselves to Bay Ridge, caffeinated and ready to chop.

Bay Ridge Cares exists in an unassuming church basement -- you might miss the entrance if you're not careful -- and does what one volunteer calls "Guerrilla Cooking." They prepare two services a day -- one is sent out just before lunchtime, another around 3 PM -- through the work of just ten to fifteen volunteers, a number that fluctuates daily. There is a chef in the kitchen every day, supported by part-time caterers, home cooks, and neighbors who may not be comfortable chopping but know that they want to help.

They prepare vegetables on a long table in a meeting room adjacent to the gym, but often have to cut onions in the kitchen because the priest "doesn't like the smell". This isn't your average soup kitchen. Rather, it is an effort organized by people who won't stop until those in need are fed. And not just fed, but fed real food. 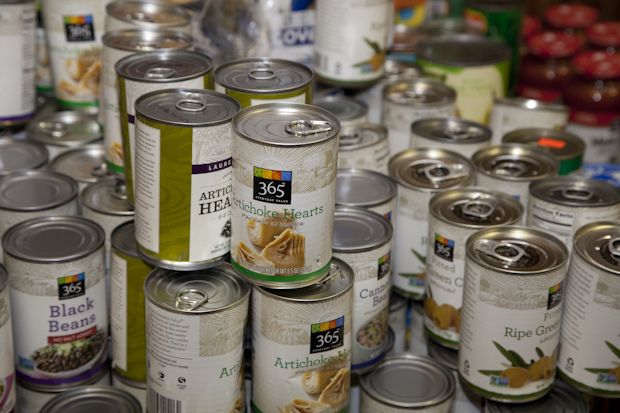 The prep room is lined with stacks of cans, 50 pound bags of produce, and endless boxes of pasta. The Bay Ridge Cares team makes an effort not only to feed as many people as possible, but also to provice them with nutritious, interesting meals -- not just endless trays of pasta with tomato sauce. These people take care in the process, not just the output -- which, it seems, makes their time in the kitchen even more worthwhile for everyone involved. 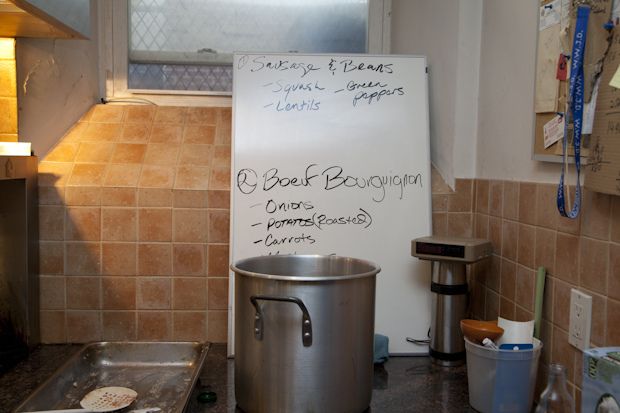 The menu for the day was Sausage and Peppers for the first service, and Bouef Bourguignon for the second (somewhere, Julia Child is smiling). Kristy and I arrived at 9, met the other volunteers, got a tour of the operation, and quickly made ourselves useful by helping to slice fifty pounds of onions. Thank goodness they didn't ask for a dice. 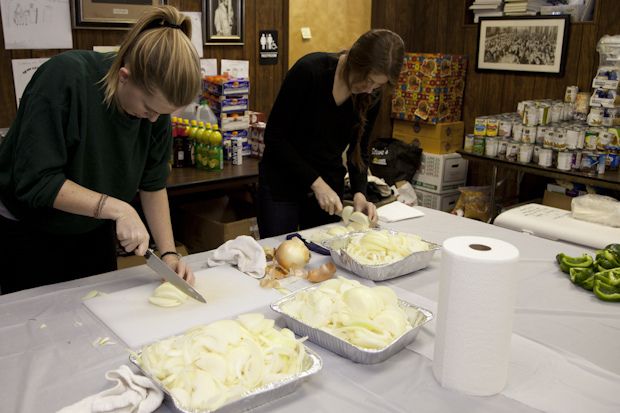 We also prepped carrots and celery -- mirepoix vegetables are a staple in this kitchen because of their versatility and low cost. Next came the peppers. You may remember reading in Kristy's post that we bought every single green pepper at Whole Foods. They all got chopped, cooked, and served the next day. 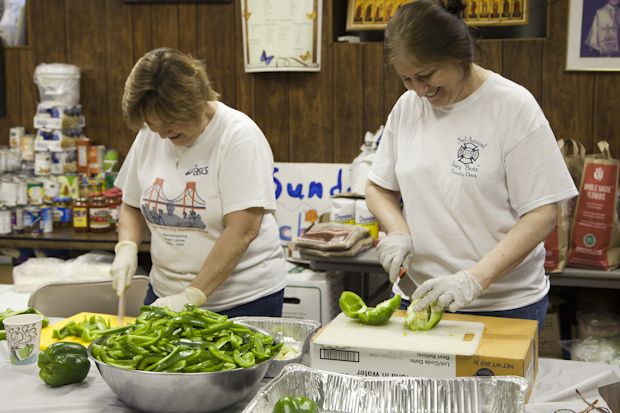 We were so impressed by the volume that these people put out each day, on top of working, raising families, and -- apparently -- sleeping. The fridge is filled with fresh produce, and they do their best not to waste food. After the team assembled and wrapped 100 tuna sandwiches, leftover bread was chopped into cubes to later become bread crumbs or croutons. Efficiency is the name of the game here. They do what they can with the space that they have, which includes stacking stock pots and colanders on a fold-up table in the small hallway. 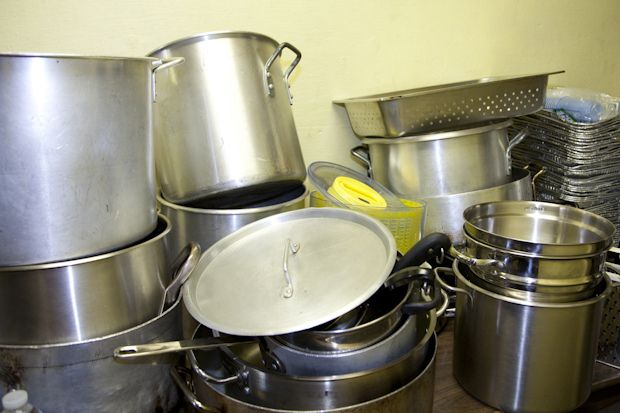 Back in the kitchen, Chef Lawrence -- who goes to grad school full time, by the way -- unpacked pounds of turkey sausage from Whole Foods. This isn't a commercial kitchen, so they make do with what they have -- and they do it well. They even discovered the best way to fit ten hotel pans on a small kitchen island. Soon, pans of sausage and peppers were plated up, atop heaps of cooked potatoes, into hotel pans. It was a comforting meal sure to warm anybody up on one of the season's harshest, coldest days. Each tray of food goes out with a heart on it -- a testament to the care that these volunteers put into their work and their community. 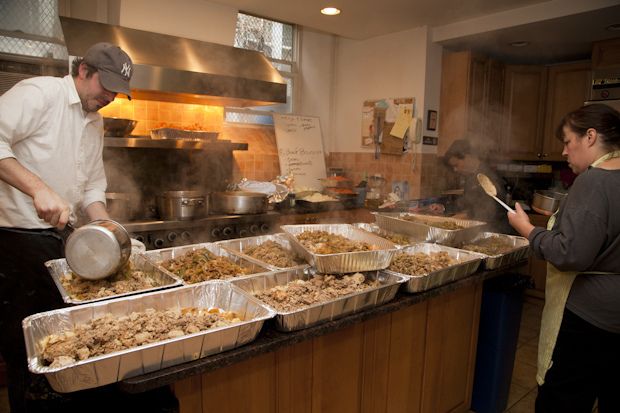 Allison Robicelli started this project in her apartment, and it has grown into an inspiring labor of love. They worked exclusively with donations until recently, when they received a grant from the city. None of these people knew each other three weeks ago, and now, they tell us, they're all friends -- joking, assigning each other nicknames, and singing along to '90s rap on an iPhone speaker. They've achieved the output of a commercial kitchen with the intimacy and care of home cooks. And, with Whole Foods' generosity, they were able to feed 1,000 people this day. The next day would feed 800. More trips to the store will mean even more food, and more people fed. 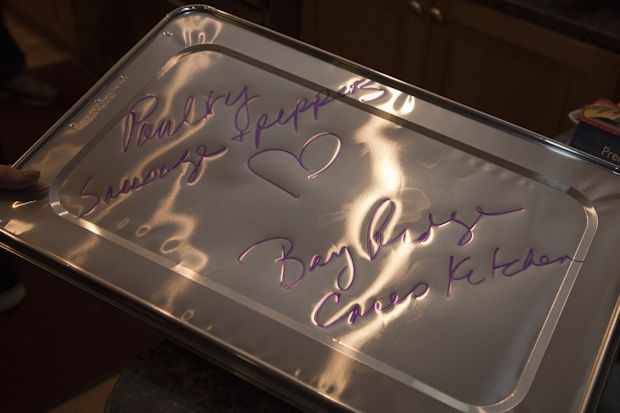 As the day wound down, and the clean up was over, a few of us sat in the prep room and chatted. We learned about each others' lives, and heard more stories from the few weeks that BRiCK had been up and running. We finally got up to leave, wrapping our coats tightly around us, and said our goodbyes. As we headed down the hallway, Karen -- one of the organizers -- reminded us to get home safely. "Make sure your driver doesn't drive too fast," she chided. "I'm serious. If he's driving too fast, you tell him to slow down!"

We assured her we would, comforted by the care that this group of volunteers showed not just each other, but the community at large. The greatest success stories of Sandy relief have come from community-based organizations. We're so happy that, thanks to Whole Foods' support, we could join this community, too.

Teri B. December 17, 2012
Thanks you for such a nice piece on our kitchen! It was lovely to have you spend the day with us.