Amy_N-B won this week's contest for Your Best Beets with French "Peasant" Beets. 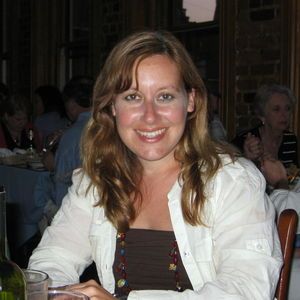 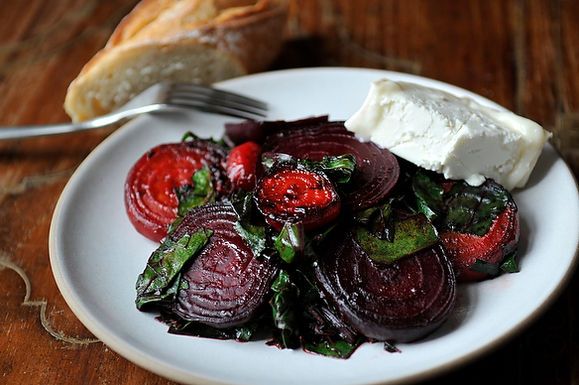 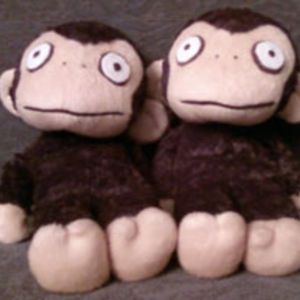 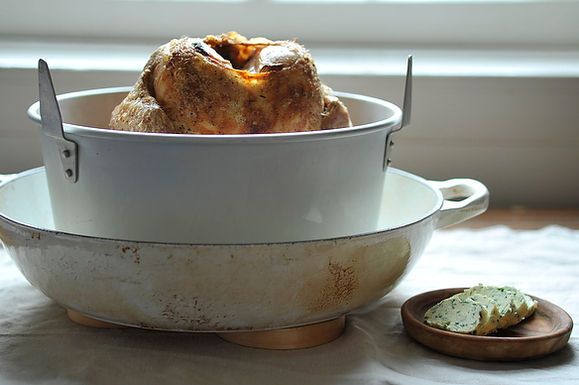 Describe an early food experience that has influenced the way you think about food and/or cooking.
My father was an American diplomat and I lived outside of the United States for 14 of my first 18 years. We often lived in countries where convenience foods were unavailable and grocery shopping meant going to the local outdoor market. Despite being raised in the Midwest on yummy, but out-of-season food, my mother adapted to this lifestyle with great gusto, preparing remarkable gourmet food for the family and foreign dignitaries alike. As a toddler, I loved sitting on the kitchen counter "helping" my mother to prepare Julia Child's sauces. I've never really left the kitchen.

What's your least favorite food?
Pork. I don't actually eat any meats anymore (I'm a pesco-vegetarian), but I always disliked the fattiness of pork. This did not stop me for rooting for Kevin on "Top Chef" last season.

What is the best thing you've made so far this year?
I made a super spicy Mexican flourless chocolate torte for my husband's birthday. I'm not a baker, so this was an accomplishment for me.

Describe your most spectacular kitchen disaster.
I was 12 and I was cooking dinner for my brother (age 7 at the time); our parents were working late. I had boiled some tortellini and was putting them in a Pyrex casserole dish to go in the oven with some sauce and parmesan. I placed the Pyrex lid on the stove and it exploded, shooting hot melting glass all over the kitchen and melting some into the throw rug on the floor. I had accidentally left the burner on.  I started cleaning up the glass and smelled garlic bread burning in the toaster oven, I asked my brother to pull it out and he used a paper towel as a hotpad which then caught fire. We were both okay, but a little traumatized.

What is your idea of comfort food?
Garlicky shrimp and creamy carbs. I love the recipe for Pennette alla Ines from Diane Seed's "Top One Hundred Pasta Sauces." It has a creamy, tomato, garlic and brandy sauce and calls for tons of shrimp. When done without bacon, I really love shrimp and grits. The ones at Farmer Brown's in San Francisco are outstanding.

Apron or no apron?
I occasionally wear my apron. I should probably wear it more often.

What's your favorite food-related scene in a movie?
I love the scene in "Titus," when Titus (played by Anthony Hopkins) serves the meat pies (made of Tamora's sons) to Tamora. It's totally creepy and ruthless. Less insanely, I loved almost every minute of Meryl Streep's brilliant portrayal of Julia Child.

If you could make a show-stopping dinner for one person, living or dead, who would it be?
Hillary Clinton

You prefer to cook: a. alone, b. with others, c. it depends on your mood.
C. I mostly like to cook alone, but I enjoy the times when I get to cook with my mother and brother who are both outstanding cooks. I usually cook vegetarian and/or ethnic food. My mom specializes in French classics, and my brother brings a creative New American flair. Regardless of whether I get any help, I love spending time with friends while I cook in my kitchen. Our dining room table is across from the island so that I can drink wine and chat with friends while I cook.

When it comes to tidying up, you usually: a. clean as you cook, b. do all the dishes once you've finished cooking, c. leave the kitchen a shambles for your spouse/roommate/kids to clean.
I hate to admit it but I tend towards C. My husband, Brad, does the dishes and cleans up after me, though I have gotten better about rinsing my bowls and pots as I go. This "division of labor" is such a running joke that I just started a cooking blog called "Amy cooks and Brad does the dishes." 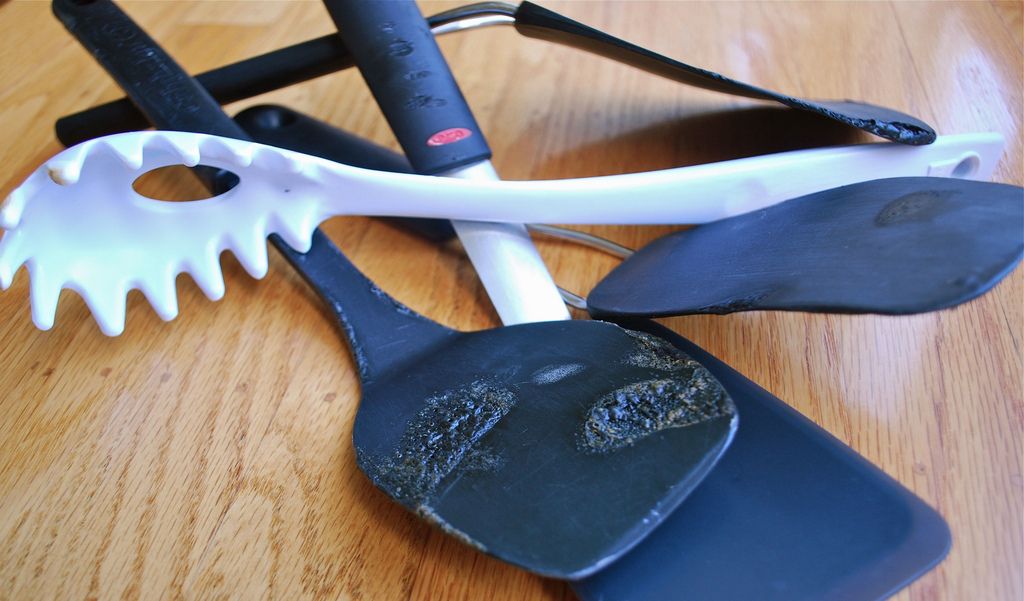 (Monkeymom takes no prisoners on the way to culinary greatness)

Describe an early food experience that has influenced the way you think about food and/or cooking.
I grew up in a town where there weren't a lot of other Chinese families. We'd end up going to San Francisco once or twice a year to buy Chinese ingredients and eat at great restaurants. Most of the time at home my parents ended up making due with what they had to work with and it was really great. They  tried to make things they missed, like soybean milk (yes, from dried soybeans!). They also liked to try new things and I remember making ice cream, jam, and donuts when I was young. So I think that I learned to value both traditional foods as well as venturing out to explore new things as well.

What's your least favorite food?
I have a mental thing about eating the feet and heads of anything, unless I can't tell what they once were.

What is the best thing you've made so far this year?
A lobster and shrimp cioppino with garlic bread.

Describe your most spectacular kitchen disaster.
I do my fair share of melting plastic, burning dish towels, and imploding cakes (see KelseyTheNaptimeChef's Chocolate Bundt Cake comments). I have a very bad memory, so I have erased any other big mistakes from my brain (that's my story and I'm sticking to it).

Well, not completely. Last week I was so excited to have beets in the kitchen that I was trying all sorts of things. I have never tasted pickled beets so I thought I'd try to make some after dinner one night. I was heating up some vinegar to soften some onions in a bit in the pickling liquid. My 8 year old daughter looked up from her homework, yelling "What is that HORRIBLE smell?" Did I mention the fan on our hood is horrible? My husband, the beet and pickle hater, was dutifully doing dishes and chimed in, "That is nasty." They both evacuated immediately. My 4 year old son, who normally orbits me like a small moon, lasted just long enough to watch me get the pickling liquid into the jar with the beets. He looked at it, holding his nose, and said, "Ew. It looks like dead octopuses," and then ran away. They wouldn't come back downstairs all night. Needless to say, they never tried the pickled beets.  I, however, thought they were pretty good.

What is your idea of comfort food?
Starchy things like pasta carbonara, rice (plain or soupy), or buttery bread.

Apron or no apron?
I never think about it until I already have food splattered all over me.

What's your favorite food-related scene in a movie?
Touching: There is a scene in "The Joy Luck Club" when the mother takes the food out of her own bowl to give to her daughter. Funny: Candy bar...Swimming pool..."Caddyshack." Drool-inducing: "Eat Drink Man Woman" opening scene when the chef is making a feast for his family.

If you could make a show-stopping dinner for one person, living or dead, who would it be?
The President. What a stressful job. He also looks like he would appreciate a good meal.

You prefer to cook: a. alone, b. with others, c. it depends on your mood.
B. I like to get to know someone by watching them cook. How someone chops something up or how carefully they measure says a lot about their personality type. I also learn a lot by cooking with people with different experiences and taste preferences.

When it comes to tidying up, you usually: a. clean as you cook, b. do all the dishes once you've finished cooking, c. leave the kitchen a shambles for your spouse/roommate/kids to clean.
C. I have no pretense here...my husband will attest to this!

ying March 11, 2010
That's an impressive kitchen disaster, AmyNB. Monkeymom, I love your description of the son who "orbits me like a small moon". Congratulations, both!

Amy_N-B March 10, 2010
Thank you so much! I've been having a tough week (serious writer's block) and this really made my day! I can't wait to try everyone's recipes.

monkeymom March 10, 2010
This is really an honor. Thanks to everyone who voted, not just for my recipe but in general, because democracy in action is amazing to witness and be a part of. I also think that Tim Wu's Misoyaki chicken was crazy good and hope that A+M consider a wildcard win for it in the future...they are really different chicken recipes that have different appeals! Can't wait to try it and some of the other stellar entries.

Kelsey B. March 10, 2010
Congrats to the winners, these are wonderful recipes!

MrsWheelbarrow March 10, 2010
So many ways to make chicken and beets now! I'm thrilled for the winners and very excited about all the dinners I'm going to make.

mrslarkin March 10, 2010
Congrats everyone! Loved all these recipes.

lastnightsdinner March 10, 2010
Congrats to the winners! These beets will be gracing our dinner table tonight!

WinnieAb March 10, 2010
Congrats to the winners and the finalists...great recipes all!