Want to share your story? View our submission guidelines.

Today: A story about rhubarb "foraging" from MrsWheelbarrow, and a recipe for what to do with your bounty. 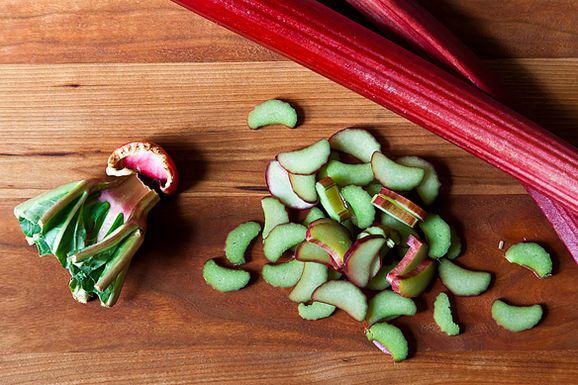 Spring was the right time for larceny. Our midwestern suburb with houses as new as President Johnson’s civil rights was all lush lawns in the front and swing sets in the back. My mother loved nothing more than lilacs, and around Mother’s Day, looked longingly at the stand of old shrubs growing behind our subdivision. Just on the other side of a creosoted fence stood Sunnybrook Farm, a family owned farmette that existed long before our garage made for two American cars.

I’m not sure how Mom convinced me to snag a few of those pale purple flowers, but off I went, age seven, carrying a pair of garden pruners, climbing fences and running across pastures returning with my arms around a world of lilacs. My mother filled every container she could find with those sweet-smelling flowers, crushing the woody stems to better the water uptake.

She perked up when I mentioned a clump of rhubarb I’d seen growing near the fence line. I recognized it from hours spent with my great grandmother weeding in her ample garden.

Riding the school bus a few weeks later, I spied a roadside stand with fuchsia rhubarb stacked tall on a rickety table, and I knew my secret clump of sour stalks must be ripe. That afternoon, returning from school, and without my mother’s knowledge, off I went again, climbing fences with my clippers, returning with as much rhubarb as I could hold. It did not occur to me that this was a criminal act. No one had tended this abundant planting and I knew my mother and I would make the most of it.

We cut off the leaves and the root ends and sliced the stalks, then filled a large heavy Dutch oven, adding hulled strawberries, lemon, and sugar. I remember that smell, the sweet smell of larceny, and to this day every May I am back in the kitchen simmering strawberries and rhubarb for preserves. 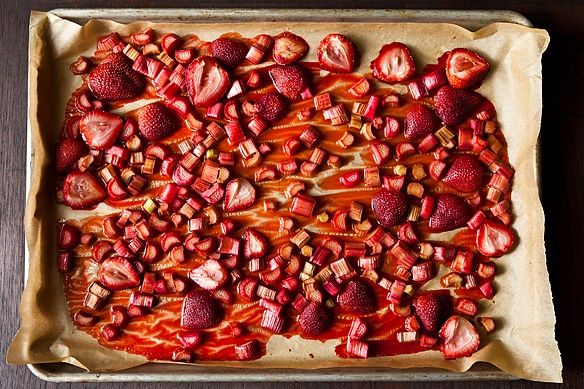 When my mother died there were only six jars of her jams in my pantry, each labeled with her distinctive handwriting declaring the contents and the year they were made. That summer, though it wasn’t a conscious decision to take up canning again, it seemed like the right thing to do. I knew I couldn’t bring her back, but I felt her in my kitchen when jam bubbled in the copper preserving pan.

Each spring since, strawberries trickle into the market and then rhubarb, and my internal engine roars to life. Every week brings a hunger for freshly harvested foods, and the need to capture and bottle all of it is maddening. It’s always in spring that my avarice shows itself. I double recipes. I make numerous batches of everything. Later in the season I am more circumspect, knowing five jars of one jam is sufficient, but there is no stopping me in the springtime, thrilling at another season ahead of me.

No season exemplifies the speed of passing time in quite the same way. In what seems like an instant the strawberries are gone, the blueberries take their place. Time is measured in the arrival and departure of fresh fruits and vegetables, and then, after the tsunami of tomatoes, the year of preserving concludes with a hard frost.

But before the rhythm of the year begins, when lilacs scent the air, memories of climbing fences and racing across fallow fields return. We call it foraging in this new world, but then it was a felonious act -- and each taste of strawberry rhubarb jam evokes only a memory of larceny.

MrsWheelbarrow May 12, 2013
Thank you, all. I'm so grateful for Food52's From the Community space.

betty F. May 11, 2013
Because of YOU, Wheelbarrow gal, I'm having a BIG piece of strawberry-rhubarb pie tonight. xx

calendargirl May 10, 2013
Lilacs and rhubarb were in my midwestern backyard. Thanks for bringing it all back, Cathy.

healthierkitchen May 10, 2013
what a lovely tribute to you both!

Ms N. May 10, 2013
Lovely homage to our mothers that taught us the finer things: how to can, and how to use the abundance of nature where we find it. Love this.

Magda B. May 10, 2013
Gorgeous, Cathy. I loved this the first time around when you read it in Betty Fussell's Word of Mouth in Tepoztlán, and you've made it even more beautiful with just a few new touches. Memorable, and so "you." Bravo!