The Dog's Breakfast won this week's contest for Your Best Risotto (Savory) with Preserved Lemon and Spring Vegetable Risotto with Grilled Pernod Shrimp. 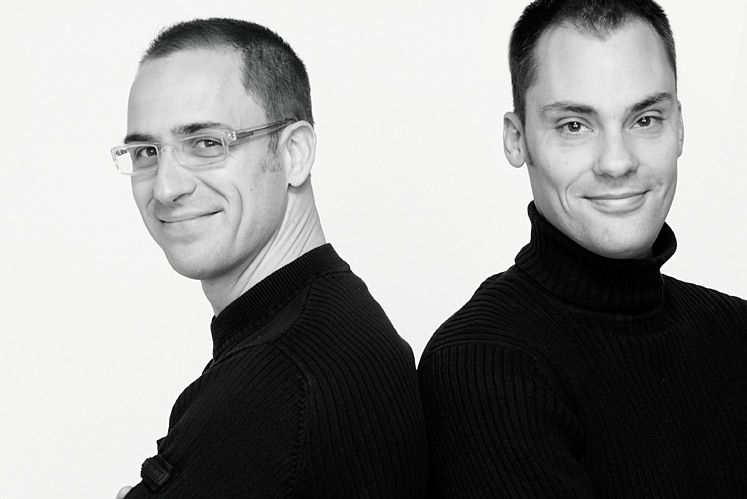 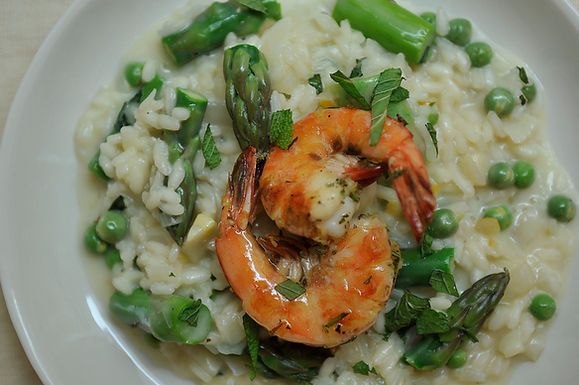 Brenna won this week's contest for Your Best Italian Dessert with Saffron Semifreddo with Cherry-Cardamom Syrup and Salted Honey-Hazelnuts. 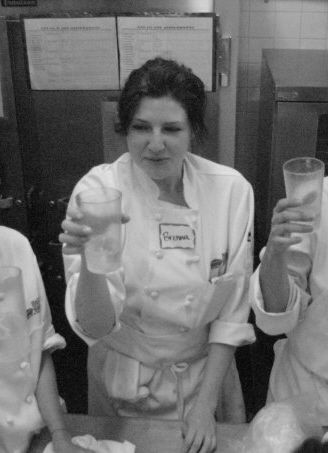 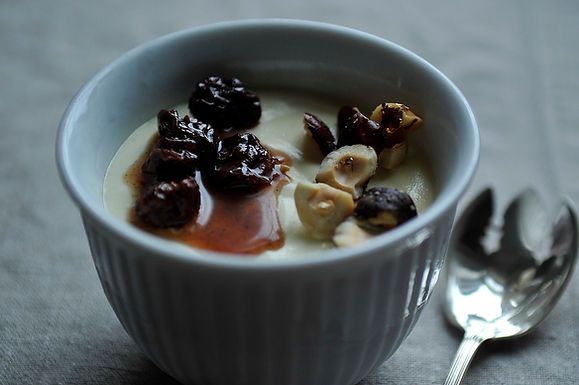 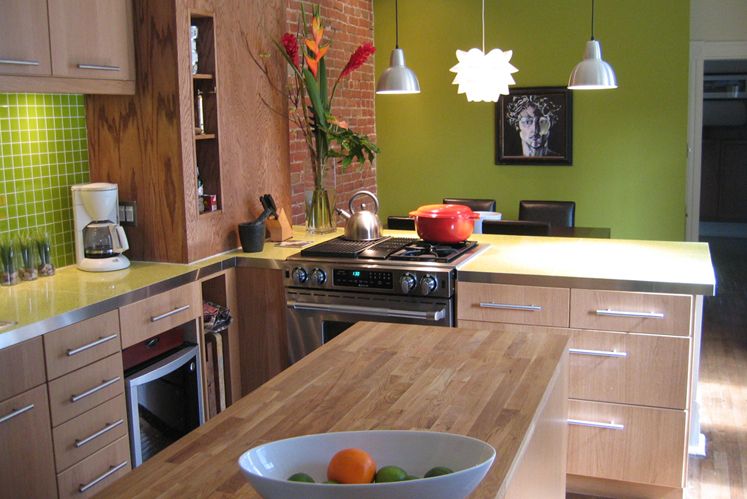 The Dog's Breakfast (David and Robert)

Describe an early food experience that has influenced the way you think about food and/or cooking.
David: When I was about 10, my father had me and my brothers and sisters sit down in the kitchen and smell all the spices in the rack. Then he blindfolded us, and passed the jars under our noses a second time to see if we could identify the aromas. He cultivated my imagination, which is a great tool in the kitchen.

What's your least favorite food?
Rob: I have a physical aversion to cream of mushroom soup. It’s a texture thing.

What is the best thing you've made so far this year?
We made a spicy beef tartare last weekend that was spot on. We’ve been trying to get this one right for a long time, and we finally nailed it. We’ll be blogging it soon.

Describe your most spectacular kitchen disaster.
David once helped a friend cook a boeuf Bourguignon for a New Year’s Eve dinner party with thirty guests. Without knowing, as the several batches of floured beef got browned, a burnt crust built up on the bottom of the gigantic pot. The dish wasn’t tasted a single time before being served, and tasted of nothing but long-simmered burnt flour. Happy New Year.

What is your idea of comfort food?
Turkey dinner: something roasted, something mashed, a salty sauce, stuffing, pickles, and two kinds of pie. Heaven.

Apron or no apron?
Kitchen towel over the shoulder.

What's your favorite food-related scene in a movie?
"Babette’s Feast," when she explains that she’s spent her entire lottery winnings to create a meal for her hosts, rather than using it to return home. “A true artist is never poor.”

If you could make a show-stopping dinner for one person, living or dead, who would it be?
Ina Garten. Because you just know she’d love anything you really cared to make.

You prefer to cook: a. alone, b. with others, c. it depends on your mood.
We prefer to cook together. Moods not allowed in the kitchen.

When it comes to tidying up, you usually: a. clean as you cook, b. do all the dishes once you've finished cooking, c. leave the kitchen a shambles for your spouse/roommate/kids to clean.
This is the source of no little contention in our kitchen. No further comment. 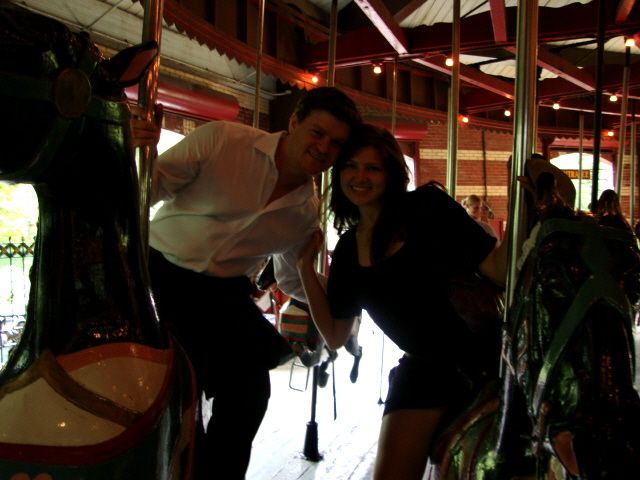 Describe an early food experience that has influenced the way you think about food and/or cooking.
I didn't grow up at the table or near a counter or by a farm. We were a microwave, can opener, and crock-pot family. Thankfully, that is where my fascination stemmed from; I wondered, "What is in this box of cake mix that we can't do ourselves?" "What did these greens beans look like before they ended up in this can?" I would learn everything through my own research.  My fascination continued in high school, where my health teacher explained that 'trans-fats' would be the next big thing to come out of our food. I was horrified, and went home and threw most of the things in our pantry away. I realized it wasn't real food. I was determined to be a Dietician and then train as a chef, combining health with cooking. The traditional Dietary Program was not what I imagined, and after extensive research (like trips to Napa Valley, eating figs with local honey and goat cheese), I realized I wished only to cook simple, whole foods that were nourishing by default. I was fortunate to find the culinary school I attended (with a health supportive, organic emphasis), and daring enough to go for it.

What's your least favorite food?
I am impossible when it comes to eating shrimp. The texture, for some reason, has always bothered me (I attribute it to being land-locked in Salt Lake City as a kid). That doesn't stop me from cooking it, and if someone orders it, I always try it no matter what.

What is the best thing you've made so far this year?
I've had a figure-dangerous obsession with making perfect gnocchi. It's been a series of hits and misses, but when I felt like they were ready for their debut, I served them to the family I cook for. I asked the resident 6-year-old (my toughest critic) what he thought, and without hesitation or knowing how to describe well executed gnocchi, he said, "They feel like tiny pillows in my mouth." I knew I'd triumphed.

Describe your most spectacular kitchen disaster.
I've made some pretty unsuccessful dishes before, and have had some bad nights working the line at a restaurant, but I think that the first time I cooked at my boyfriend's parent's house tops the list. I had just moved to town and had friends visiting so we decided to utilize his parent's big kitchen since they were gone for the weekend. I was making penne with vodka sauce, and for some reason had put carrots and celery down the garbage disposal. The sink immediately flooded -- my boyfriend scooping out cup-fulls of water, trying to drain it. I was horrified, imagining the dollar amount it would take to fix it. What would they think of this girl their son was seeing who couldn't manage herself in a kitchen? I was flustered and impatient with the sauce and pulled it off the stove before the vodka had fully cooked off, resulting in a bitter sauce that was not palatable.  I was embarrassed, but happy to report that he and I are still dating.

What is your idea of comfort food?
The age-old tale: food that takes me somewhere else, to another time, or reminds me of someone. Figs are magical and remind me of Napa; pasta warms my heart by reminding me of countless good dates, my birthday alone in New York and how meaningful it was, and me begging my mother for more angel-hair. Comfort food makes the present moment feel like home, no matter where you are.

Apron or no apron?
Apron; I save my whites for when I need to look professional, but around the house I use one I unearthed that has a fake government emblem and says "Hail to The Chef".

What's your favorite food-related scene in a movie?
Easily Audrey Hepburn at 6:00a.m. on 5th Avenue with a croissant and coffee, standing in front of Tiffany and Co. before adventure ensues.

If you could make a show-stopping dinner for one person, living or dead, who would it be?
Even though I've never met her, I know that my Grandma Doris was a gourmand at heart, taking my mother to New York City and stopping to take in the scents of the wonderful food the city had to offer. She never hesitated to treat herself to a Grasshopper, and she'd bring filets home from the restaurant she was working in and make a special meal for just she and my mom to share, knowing my mother appreciated good food.

You prefer to cook: a. alone, b. with others, c. it depends on your mood.
C: It depends on my mood.

When it comes to tidying up, you usually: a. clean as you cook, b. do all the dishes once you've finished cooking, c. leave the kitchen a shambles for your spouse/roommate/kids to clean.
A: I clean as I cook.

lastnightsdinner April 2, 2010
Congrats to the winners, and the finalists as well!

Kelsey B. April 1, 2010
Congrats winners! These are both truly great recipes!

mrslarkin March 31, 2010
Well done, winners and finalists!! Love reading the disaster scenarios - makes me feel good about my kitchen pitfalls - when they rarely happen, that is. ;-)

testkitchenette March 31, 2010
Congrats to both your recipes were visually stunning, well written, and made me want to lick my screen. Many thanks!

Intelatin March 31, 2010
Is your gnocchi recipe on this site?