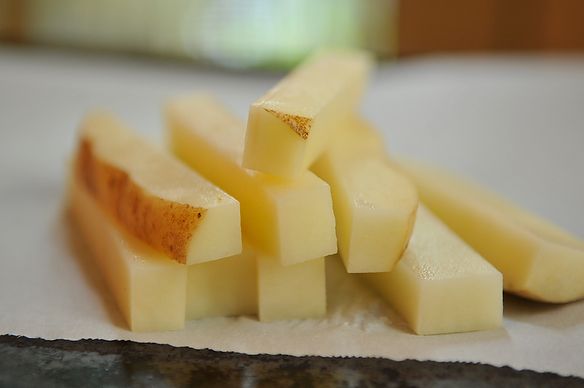 When Merrill and I aren't at Morandi for our Manhattan meetings, we like to go to the Ace Hotel, whose lobby lies at the nexus of a Stumptown coffee shop, the Breslin, and hipster-dom. A couple of weeks ago, we made the life-altering decision to order the Breslin's "thrice-cooked" potato chips (fries, in American english).

They are, in my view, the ideal fry. They have a surface that crackles when you bite into it, yet is quite chewy. They are sweet yet plenty salty. They smell of pork fat yet are not leaden. And they come with cumin mayo, so what else could you possibly want? Well, a ginger beer -- that's what I like to order with them.

I had to try them at home. Thinking "thrice-cooked" meant fried in oil three times, I failed monumentally with my first experiment. I ended up with flaccid potato sticks that tasted bitter, rejected the salt I threw on them and were utterly vapid.

So I turned, as I often do in times of cooking crises, to my good friends-I've-never-met-in-person on Twitter. I was quickly set straight about the source of "thrice-cooked" potatoes: they are a Heston Blumenthal classic. Then bonniebenwick stepped in and pointed me in the direction of this recipe from Waitrose, which sums up the key points in the technique -- boil the potatoes until tender, freeze them, fry them at a low temperature, freeze them again, and finally fry them at a higher temperature to crisp and brown the potatoes.

I played around a little with the recipe. I used Yukon Golds and russets because we don't have access to the Maris Piper and King Edward potatoes called for in the recipe. I knocked the boiled potatoes around a bit in the pan to rough up the edges and make them crisper when fried (also a British trick). And because the waiter at the Breslin told us they fry the potatoes in lard, I went for a modified version, adding 2 slices of pancetta to a quart of peanut oil.

The potatoes came out handsomely, even if not quite as impeccable as those at the Breslin. Next time, I'd go all out and fry them in the delicious leaf lard from Flying Pigs Farm, and I'd invite my friends over and have them each bring a dish so I could focus on making the most labor intensive but delicious fries on the planet.

Adapted from Waitrose, who adapted it from Heston Blumenthal, the chef at The Fat Duck in England

1. Place the sliced potatoes in a large pan of cold water and soak for half an hour. This removes excess starch, giving the potatoes a lighter texture.

2. Rinse and place the potatoes in a pan with cold water seasoned generously with sea salt. Bring to a boil and cook for 8 to 10 minutes, or until you can insert a knife easily through the center of the largest chip. Drain and run the chips under very cold water to prevent further cooking. Place the potatoes back in the pan, cover with a lid and shake the pan vigorously to rough up the edges. Spread the potatoes on a tea towel to dry and arrange on a baking sheet lined with parchment paper. Place the baking sheet in the freezer for 30 minutes. You want the potatoes very cold, if not nearly frozen, before you drop them into the hot oil to fry.

3. Fill a medium saucepan a third full of oil or lard (about 1 quart) and heat it to 270 degrees. If using oil, add the pancetta and cook until crisp; use a slotted spoon to remove the pancetta (eat once cool!). Remove the potatoes from the freezer and carefully lower into the hot oil in batches of 8–10, cooking for 4–6 minutes, until they start to color. Drain on paper towel and continue cooking the remaining potatoes before cooling them in the freezer for another 30 minutes. Alternatively, prepare up to this stage a day in advance and leave them in the freezer overnight.

4. For the final cooking, heat the same oil to 350 degrees and again, lower small batches of the potatoes into it. Cook for 2–3 minutes or until crisp and golden. As they come out of the oil, drain on paper towel and give each batch of fries a good sprinkling of sea salt. Serve with mayonnaise or ketchup and eat while hot.

EBeier April 27, 2010
Why, for the last two cookings, is the oil at different temperatures??

Amanda H. May 30, 2010
The first temperature "blanches" the potatoes, cooking them through. The second cooking, at a high heat, browns them. Sorry for the slow response on this!

betteirene April 24, 2010
Twenty-five years ago, when my six sons were younger, I took advantage of every opportunity to feed them cheaply but well. Even though I had a huge garden and grew our own potatoes and sweet potatoes, I couldn't pass up a deal at a local chain grocery that offered a 50-pound bag of potatoes for $3. I bought two bags, one to eat fresh and one to put up. A couple of days later when I finally got around to slicing and dicing them, I found that they weren't the tail end of the last season's crop but the very first of that season's crop. They were beautiful Idaho russets, completely unblemished, and so crisp and crunchy and hard that my hands got sore from the knifework. I had my four biggest pots full of potatoes and boiling water on the stove, both sinks full of ice water to shock the blanched french fries and cubes, the kitchen table covered with an old tablecloth with drying fries, and every flat surface I owned--cookie sheets, cooling racks, casserole dishes, cutting boards--single-layered with potatoes in the kitchen freezer and the basement chest freezer, waiting for them to get hard enough to put into plastic storage bags. I still boil my french fries first, but am very, very glad I no longer have to prepare 50 pounds at a time. That knock-about technique of exposing more of the potato's surface area to the oil--pure science. As a bona fide kitchen geek, I appreciate your passing along that tip. And the pancetta trick, too, is also science, not just a flavoring technique. Have you ever noticed that the first batch of anything deep-fried takes forever to brown? Never-used oil has a harder time penetrating the moisture barrier of whatever is being deep-fried; by cooking the pancetta, you're breaking in the oil, which helps immensely to cook the potato all the way through and to color it up. I've always used 3/4 fresh oil to 1/4 previously used oil--but I'm gonna try the pancetta trick soon. Sorry to ramble.

Effie April 26, 2010
Thanks for your insight. I love the science of cooking.

Rhonda35 April 26, 2010
SIX sons??! Wow, I can barely deal with one. Good for you and thanks so much for sharing this story. I loved my time in the UK (4 years) and I was so happy to learn that "knock-about" technique for making crispy potatoes.

Amanda H. May 30, 2010
Thanks so much for your post -- really interesting about your oil ratio. Also love your economy in the kitchen!

lastnightsdinner April 23, 2010
I've done double-cooked (in duck fat) fries, but never "thrice-cooked". We always have great local lard on hand, so I am definitely going to have to try this method. Thanks for sharing it!

Amanda H. April 23, 2010
It's pretty interesting (and easier if spread out over two days). I think using older potatoes would also help, but I didn't have a chance to try this out because wanted to post it this week. Good luck! (Oh, and how am I not surprised that you keep local lard on hand!)

gluttonforlife April 23, 2010
I'm writing from my room at the Ace to tell you that you're my favorite food bloodhound!! I'm off to order some fries and ginger beer...

Cara E. April 23, 2010
Sounds great, and time-consuming indeed! But I love french fries at all times. If I don't make them, at least I swear I'll get to the Breslin.

mariaraynal April 23, 2010
Yet another creative recipe -- the pancetta is a brilliant technique. Great photo, too.