ENunn won this week's contest for The Best Technique or Recipe Your Mother Taught You with Faulknerian Family Spice Cake, with Caramel Icing.

Vvvanessa won this week's contest for Your Best Spring Refresher with Mint Limeade. 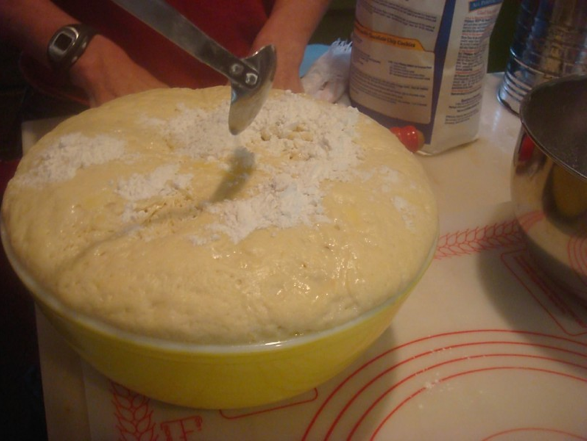 (ENunn making the dough for her Aunt Mariah's famous rolls)

Is there a dish that you are known for among friends and family?
My Ragu Bolognese (is that redundant?)--it has evolved a lot over the years from a recipe I put together using Mark Bittman and Mario Batali recipes as a guide. We had it at my sister's house again this year over the holidays. It cooks forever, has lots of fat, including cream, and should not be eaten on a regular basis.

What's a food you really don't like?
Lima beans. They seem unripe.

Describe your most spectacular kitchen disaster.
The worst thing that I've done in the kitchen is burn my hand so badly that it made my family avert their eyes, like that dinner scene in "Alien."

What was the menu for the last dinner party you hosted?
Homemade pizzas and big green salad.

Apron or no apron?
No apron. If someone would give me one that stays on and covers my arms, too, I'd wear it. A haz-mat jumpsuit might work.

What's your favorite food-related scene in a movie?
I love the end of "Big Night," when Stanley Tucci makes eggs for Marc Anthony, as the busboy, and neither of them speaks.

What do you listen to (if anything) while you're in the kitchen?
Pandora! Most recently I listened to the Elvis Costello station, but I also like to listen to the John Coltrane station. And I listen to Broadway showtunes, sparingly, because people will kill you for that. I often cook over the sound of sports on television, however, but that is incidental and beyond my control.

You prefer to cook: a. during the day, b. at night, c. whenever:
C: Although I do it mostly at night.

When it comes to tidying up, you usually: a. clean as you cook, b. do all the dishes once you've finished cooking, c. leave the kitchen a shambles for your spouse/roommate/kids to clean.
A, as much as possible. 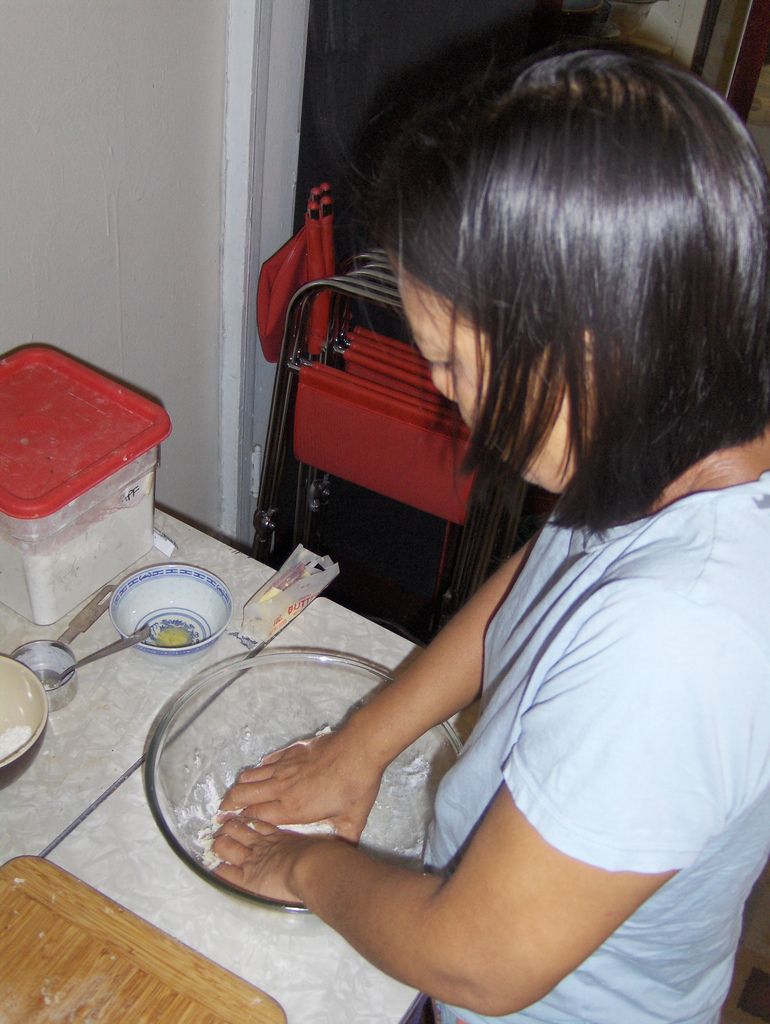 Describe an early food experience that has influenced the way you think about food and/or cooking.
My most vivid childhood food memory is helping/watching my maternal grandmother make pork potstickers. I remember watching her take each potsticker skin in the palm of her hand, wetting the edges with dampened fingertips.  She would use her long chopsticks to pick up just the right amount of the pork filling--fragrant with soy sauce, ginger, and green onions--and set it in the center of the wrapper and then crimp the edges of the dough together. From there, she would create vast, neat rows of them nestled into re-used, white styrofoam ground beef trays to be frozen en masse. The dining table would end up a sea of potstickers. Later, my mother would brown them in a shallow pool of oil in a frying pan, adding water to create a plume of steam that would finish cooking them into the plump, juicy dumplings I still crave today. It is only as a cooking adult that I understand how labor-intensive it is to make dozens and dozens of dumplings at a time; I also now understand how meditative and therapeutic it is not only to engage in that repetitive task but also how good it feels to make food to feed a family.

What is the best thing you've made so far this year?
I make cookies frequently and take them to work (at the restaurant where I bartend) where they are generally met with a positive response. But I recently made peanut butter-oatmeal cookies that had everyone (including the cooks) really excited. One of them proclaimed, "That is exactly what a cookie is supposed to be." I can live with that!

Describe your most spectacular kitchen disaster.
I made the birthday cake for the 60th birthday of the owner of the restaurant where I worked years ago. That cake was a full-fledged disaster in every way. The cake (chocolate) was bone-dry, either from overcooking or a bad recipe--I'm still not sure. In an effort to salvage it, I made an espresso syrup and brushed it on to try to moisten the layers. This is how I learned that I cannot un-dry a cake. I ran out of butter for the frosting, so it had a very cloying, powdered sugary taste, not rich and buttery. I made four tiers, but they were too thick and once assembled, slipped and slid so much I had to anchor the corners of the cake with bamboo skewers. And, it was just plain ugly. I knew it was a bad cake, but I really knew it was bad when the entire staff of the restaurant (including the chef, who normally wasn't present at shifts when I worked) ate it in complete silence. And it wasn't that kind of silence because they were having a transformative food experience. Clearly, no one had anything good to say about it. Utter embarrassment.

What is your idea of comfort food?
Comfort food is any food that evokes that immediate, visceral feeling of well-being, usually related to a nice memory or sensation. For me, those foods specifically are quite diverse. Vietnamese pho (extra tendon, please), cake (something with a tender crumb, like what you would get out of a boxed cake mix, or what I think of as "birthday cake cake"), Chinese egg custard tarts, huevos rancheros with extra runny eggs, super ripe peaches and strawberries and blackberries, warm Chinese soy milk, chèvre spread on baguette with strawberry jam, french fries and fried chicken dipped in honey.

Apron or no apron?
Commando. No apron.

What's your favorite food-related scene in a movie?
The scene where Charlie finds the Golden Ticket in "Willy Wonka and the Chocolate Factory" is one of my all-time favorite movie scenes, food-related or not. The scene with the kids and parents eating their way through that first room in the factory is pretty cool, too.

If you could make a show-stopping dinner for one person, living or dead, who would it be?
A show-stopping meal? That would be for Jimmy Carter. I know he would be gracious no matter what I would turn out. I really, really hope I get to meet him one day.

You prefer to cook: a: alone, b: with others, c: it depends on your mood.
A: Alone (but in part because I have few opportunities to cook with others)

Jennifer A. May 5, 2010
Congratulations! Wonderful recipes and such nice 'behind the scenes' stories.

Kelsey B. May 5, 2010
Congrats winners and finalists - these were all great recipes!!

monkeymom May 5, 2010
Congrats winners! I can totally relate to vvvanessa's potsticker story. I also love what ENunn said in the AP article about food52. Wonderful!

AntoniaJames May 5, 2010
Love the stories and love the recipes. In fact, all the recipes in contention for this contest are excellent. Congrats!

mariaraynal May 5, 2010
Congratulations to the winners and finalists for more excellent, thoughtful recipes!

TheWimpyVegetarian May 5, 2010
Major congratulations to both winners and big thanks for great recipes from all the finalists that we all now can enjoy!

MrsWheelbarrow May 5, 2010
Hearty congratulations to both the winners. These recipes promise happy eating.

WinnieAb May 5, 2010
Yay! I already made the cake, and it's great...excited to try the mint limeade this weekend.

ying May 5, 2010
Congratulations! I'm so excited to try both of these.

nannydeb May 5, 2010
Congratulations! I can't wait to try both recipes!

lastnightsdinner May 5, 2010
Congratulations to the winners, and to the finalists as well!

dymnyno May 5, 2010
Congratulations to you both!

mrslarkin May 5, 2010
Well done winners! And congrats to the finalists as well.

aargersi May 5, 2010
Congratulations! Great recipes, and again so fun to get to know the cooks behind the recipes as well.