Every week, Shauna Ahern of Gluten-Free Girl and the Chef -- and Gluten-Free Girl Everyday -- will be sharing smart tips and smarter recipes that will please even the most devout gluten-eaters among us. Come one, come all -- we're going flourless.

Today, Shauna's letting us in on a secret the rest of the world has already discovered: sorghum is a stand-out in the world of whole grains. 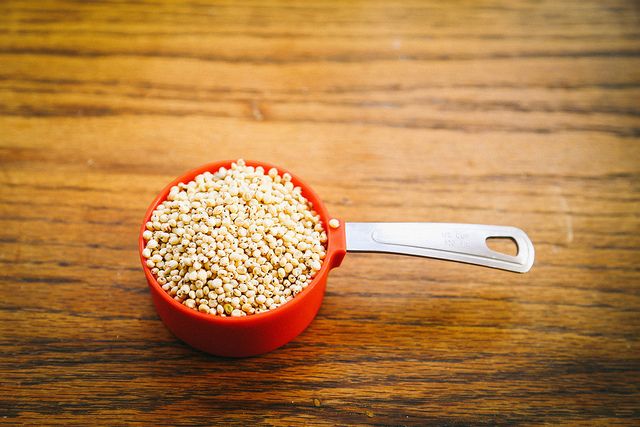 The first time we cooked sorghum, my husband did a little jig. "I've been looking for a replacement for Israeli couscous. Here it is!"

However, sorghum doesn't need to be compared to anything else. It is its own whole-grain star.

Most people will look at you funny if you ask if they enjoy sorghum. Until recently, it was primarily grown as feed for livestock in the United States. However, in the rest of the world, especially in Africa, sorghum is widely used to make porridge, flour, and beer. As is true for many grains, sorghum spread through the world via the Silk Trade, and was eventually cultivated in China and India. An Indian flatbread called roti is made with sorghum flour.

I like popping sorghum like popcorn. Get a cast-iron skillet hot, toss in some whole-grain sorghum, and watch the little balls dance and pop on the hot surface. Splash some warm milk over the hot sorghum, with a drizzle of honey, and perhaps some toasted walnut pieces. Breakfast.

Sorghum is full of dietary fiber, which we all need. And it also makes a wonderful flour for gluten-free baking. Its nutty, slightly sweet taste and its high protein percentage has made it part of my baking mix for years.

If you've never tried whole-grain sorghum before, I'd suggest you try it first in recipes that call for wheat berries or Israeli couscous. Once you start playing, you might not stop.

How to Cook Sorghum

Pour the water into a large pot. Add the sorghum, olive oil, and salt. Set the pot on high heat. Bring the water to a boil. Reduce the heat to medium-low. Let the sorghum simmer, covered, until the it is soft and still chewy, about one hour. If, for some reason, the sorghum grains are still hard after all the water is absorbed, add another cup of water and continue cooking.

glutenfreegirl.com
Shauna writes about food. Danny cooks it. We grow excited every Saturday morning to go to the farmers' market. This time of year, a Billy Allstot tomato is enough to make us look like goons at the stand, jumping up and down with excitement. We will eat one slice with sea salt, standing over the sink. Another goes to our baby daughter. The rest might go into the smoker to make smoked tomato salsa, or thrown together with watermelon and good olive oil for a watermelon gazpacho, or stacked with smoked salmon and drizzled with horseradish sour cream. Every day is new. I have no idea what we're having for dinner tonight. But I'm sure interested to find out.

Edac2 April 24, 2019
My secret for perfect sorghum is the Instant Pot. I pressure cook one cup of whole grain sorghum with probably 4 cups of water for 1.25 hours. The trick I discovered is to put the grain in a steamer basket. Once the sorghum is finished cooking, I just lift it out of the water, rinse it, and put it in the refrigerator for later consumption. One cup of raw sorghum expands to about 3 cups cooked. But what is in the water that is left? Most of the water is NOT absorbed by the sorghum. It is milky, has a pleasant scent, and gels when cooled.

Faith U. May 2, 2018
I've been recently trying sorghum, and I was wondering if it is possible to cook the grain itself in the microwave (I know wattages vary); if so, then how long should the timeline be?

Nams November 30, 2016
The key to cooking these pellet like grains is to soak these overnight. That considerably reduces the cooking time (and softens the grain), especially if you are not using a pressure cooker. This grain, in its pureed form, is one of the first foods fed to babies in India. While pressure cookers are commonly used, a few traditional households use lid covered pots on the stove and that is when soaking is most useful.

Barbara K. April 18, 2016
Sorghum - pearled, whole grain or flour - has become a staple cereal grain at our house - and NOT just because I work for the Nebraska Grain Sorghum Board. It is simply a terrific grain that is simple and versatile, not to mention nutritious and wholesome! My favorite is to cook the pearled sorghum and use it in a variety of dishes - pilaf, risotto, salads, appetizers, soup, casseroles, frittata, enchiladas - you name it, sorghum has a fit. It brings wonderful nutrients and fiber to the menu in so many creative ways. I generally cook the sorghum in GF chicken broth in a pressure cooker, but have also done it stove top, baked in the oven, or slow cooker - Again so versatile! The pressure cooker is quickest and does not have to be babysat during the cooking process. I generally make sufficient for the recipe I'm doing at the time and extra for the freezer! That makes meals on the go for a busy family so much easier. Once thawed, it might be necessary to rejuvenate a little by putting in a microwave safe covered dish with a couple of tablespoons of water and cook on high for a couple of minutes and - just like that you have it! If you haven't tried sorghum yet, do so - it will become a favorite at your house, too. If you are interested in recipes, feel free to contact the Sorghum Board - [email protected] We have many wonderful recipes that we're happy to share.

Steve S. February 13, 2016
Sorghum seems to be the perfect diet food. You can't eat it. I just tried Bob's Red Mill Sorghum, cooked 3:x 1 ratio with water, brought to a boil then simmered with the lid on for 1 hour, then set to rest off heat for 20 minutes, and ended up with 3 parts water and uncooked sorghum ........ that's a pot of water and rock hard pellets. Am I missing something here?

Li D. September 26, 2016
Same thing happened to me. Rock hard pellets even after 2 hours. However, if you place the same amount 3 to 1, and put it in a crock pot on high for 4 hours or so they turn out great.

Joe W. February 27, 2017
Me, too. Not a big fan of Bob's products. Local health food store (Natural Grocers) products seem to be fresher and cook up according to instructions.

Tim Z. June 16, 2015
Grain and sweet sorghum are different plants. Sweet sorghum is used for molasses. This article is about grain sorghum.

susan G. July 16, 2013
My bag of sorghum grain (Hotline question a while ago) is still on the pantry shelf, apparently waiting for you to write this article! Now I can go ahead and get cooking...

Leona S. July 15, 2013
When my husband makes Israeli couscous he always toasts it in a little olive oil in a frying pan before adding the the water to cook, I wonder if it would work with sorghum too?

Loves F. July 15, 2013
I've really only heard of sorghum molasses (same grain used, I'm assuming?)... definitely want to get my hands on some of these little gems, I love a good grain!

thirschfeld July 15, 2013
I think there are as many as 20 to 30 species but yes sorghum bicolor is used for sorghum grain and sorghum molasses. It is what my grandfather called milo and used it extensively as animal feed. It is also used for biofuel and gluten free beer.