Every Monday and Wednesday, we'll announce a new Wildcard winner: a recipe that may not have been entered in (or won) a contest, but a recipe that we've tested and loved.

Today: The salad you should eat every day, until the season's over. 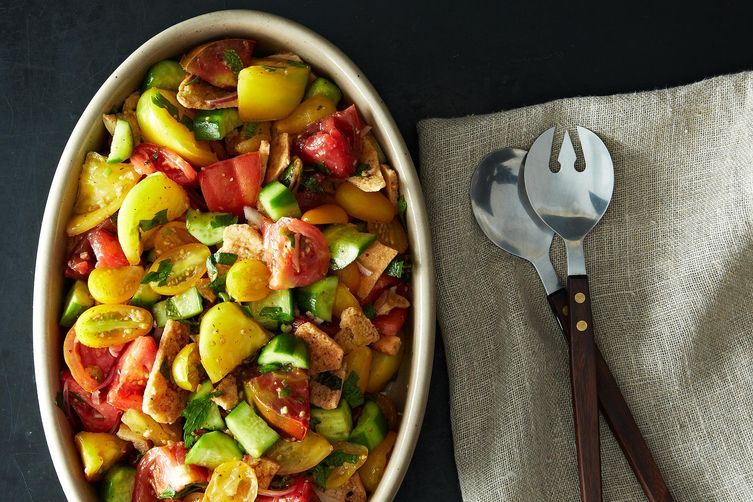 WHO: Rivka is a healthcare consultant and food blogger living in Washington, DC -- and an all-star Food52er.

WHAT: A classic Middle Eastern salad of tomatoes, cucumbers, onion and pita -- all dressed up for the peak of tomato season.

HOW: Whisk together a bright, herby dressing, toss with sliced tomatoes, cucumbers, herbs, and pita. Let marinate for a half hour, then serve.

WHY WE LOVE IT: Rivka's dressing, tart with pomegranate molasses and spiced with mint and sumac, is the perfect outfit for gorgeous greenmarket tomatoes and cucumbers. We'll be making this salad until summer becomes fall. Note: If you want the pita to stay crunchy, add them in as a garnish just before serving.

Serves 6 as a first course

It reminds me in a way of 'Greek salad', sans croutons/pita shards but the sumac dressing makes it very 'Levant'.

Thanks for the reminder!